Don’t ever, ever, say Duane Clark is ‘into’ 1955 Chevys. That’s an understatement of gigantic proportions. The gearhead doesn’t love or adore them, either. Those words are no good, too. They just don’t sum up exactly how hot his fire inside burns for the model.

That’s because the Phoenix, Arizona, resident has owned not one, two, ten or even thirty of the rolling bowtie icons. He’s owned closer to sixty. “I just have a taste for them,’ laughs the enthusiast. His passion started in high school, in Salem, Oregon, where Clark grew up. “A few friends and classmates had them. Back then, you could pick up them for anywhere around $50 to $100. They were cheap and easy to come by.”

He did just that, buying his first in 1966. From there, they just kept coming. Those early acquisitions tended to be done up in gasser style, with straight front axles and loads of speed. “I like fast cars and the oddball cars – not stockers or anything resembling how cars showed up in the showroom,’ said Clark. “I want mine to be different.”

He’s also very particular about the specific year of the cars he chooses to modify and include in his collection. While tri-five Chevys, those produced during the years of 1955, ’56 and ’57 are generally lumped together because of similar looks and feel, Clark shies away from anything that doesn’t bear two fives in the model year.

Project-Hunting On The Oregon Trail

In the winter of 2007, the enthusiast was on the prowl for another project and came across, little surprise – another 1955. To be fair, he was seriously looking. This particular one bore the middle of the road 210 trim. It marked the fortieth two-door post variant the enthusiast has owned.

The vehicle was located in Lakeview, Oregon, in the southern part of the state. It was rough, lacked an interior and complete powertrain but was solid. It was just what Clark needed for a foundation.

“The goal was to build it up as a pro-street. I knew I wanted it tubbed with lots of flames,’ said Clark. With that goal in mind, the self-taught craftsman set to work. He returned the car to his home garage (now in Bend, Oregon) and embarked on a yearlong overhaul. 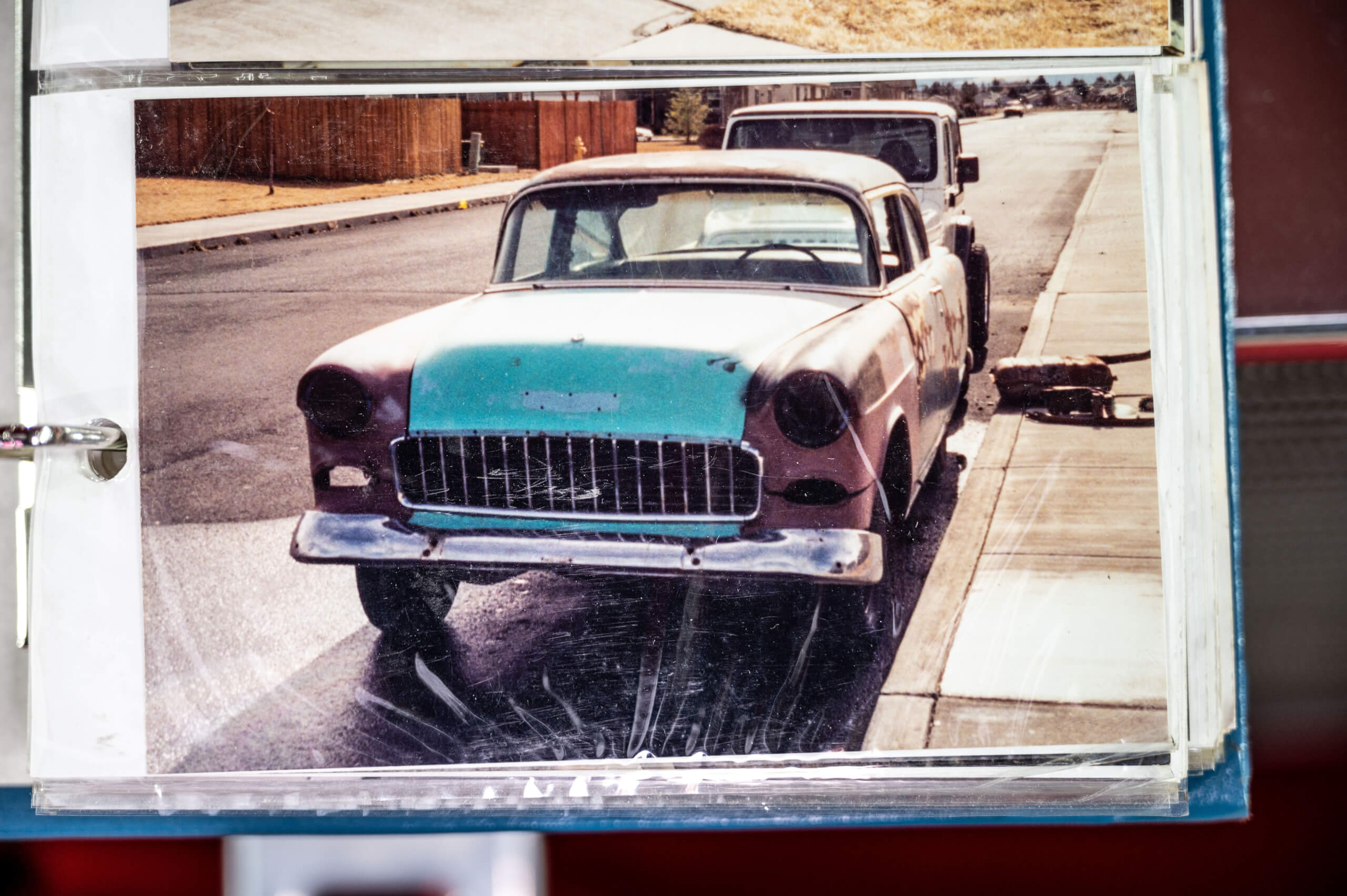 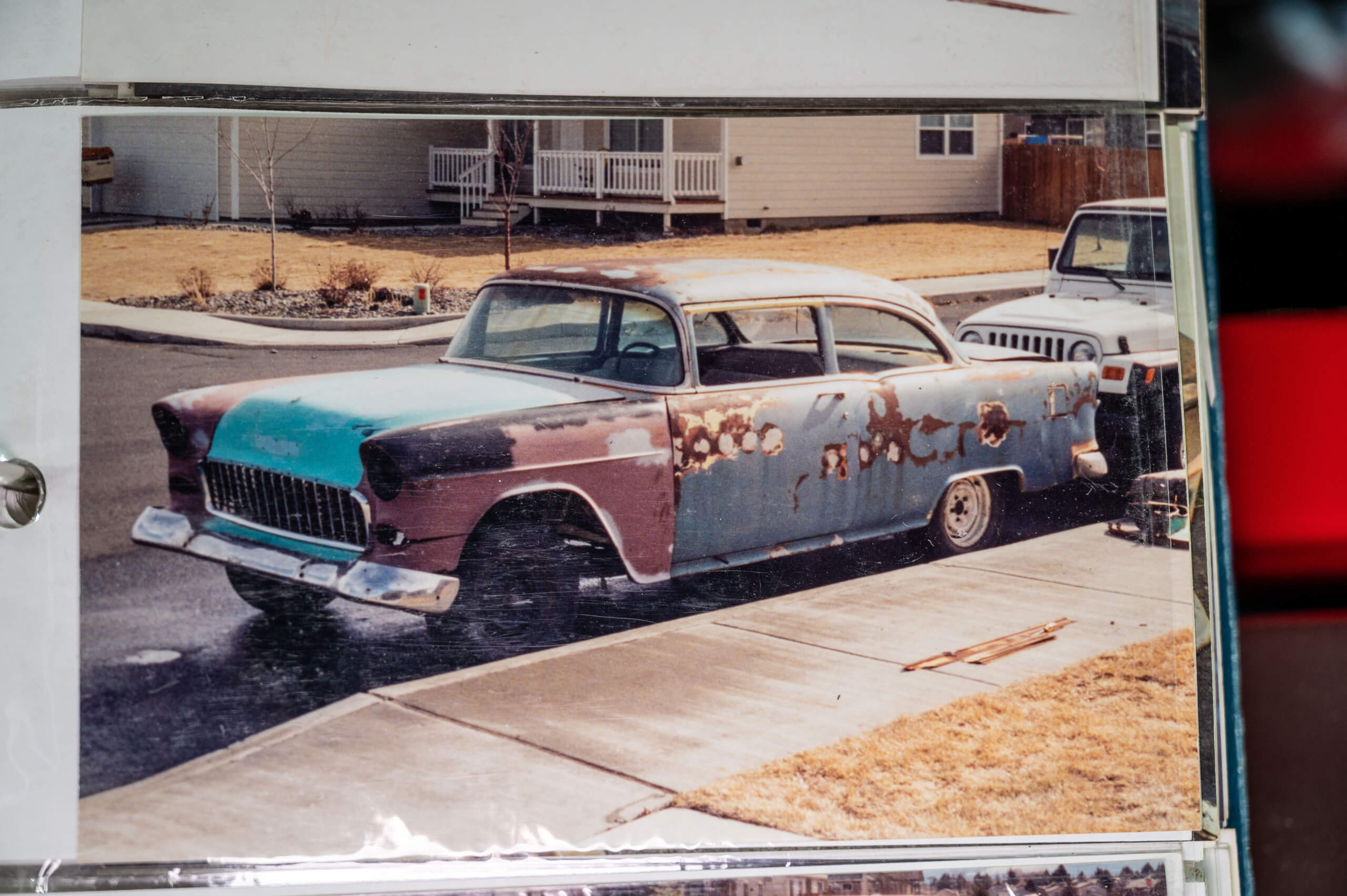 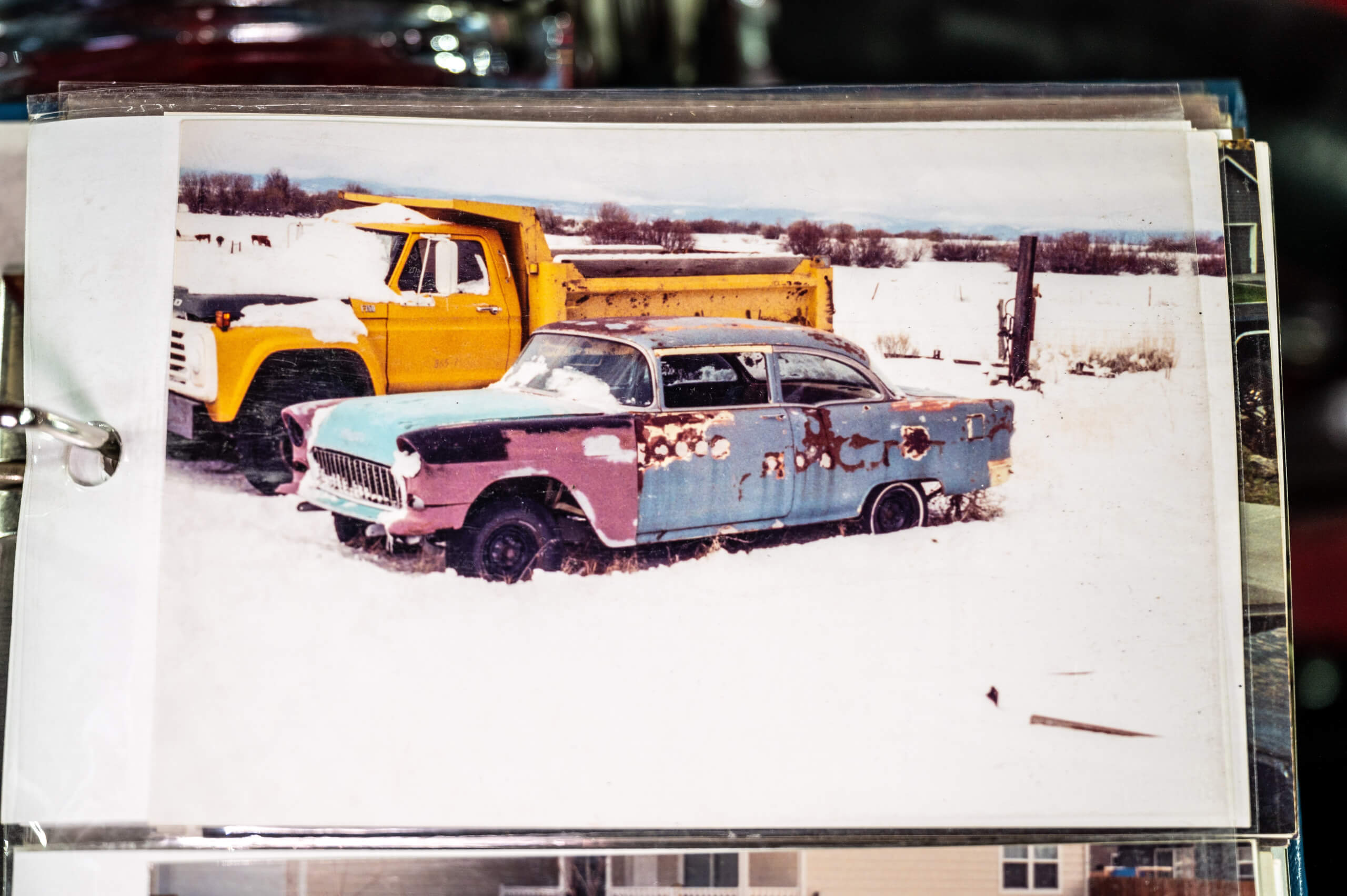 A Scott’s Hotrods ‘N Customs converted frame was slid underneath while tubs make room for massive Mickey Thompson race tires axle. Under the hood, Clark used a 454ci V8 with Ram Jet that he equipped with 502ci valve covers. He already had ‘em at home and wanted to use them get some use. 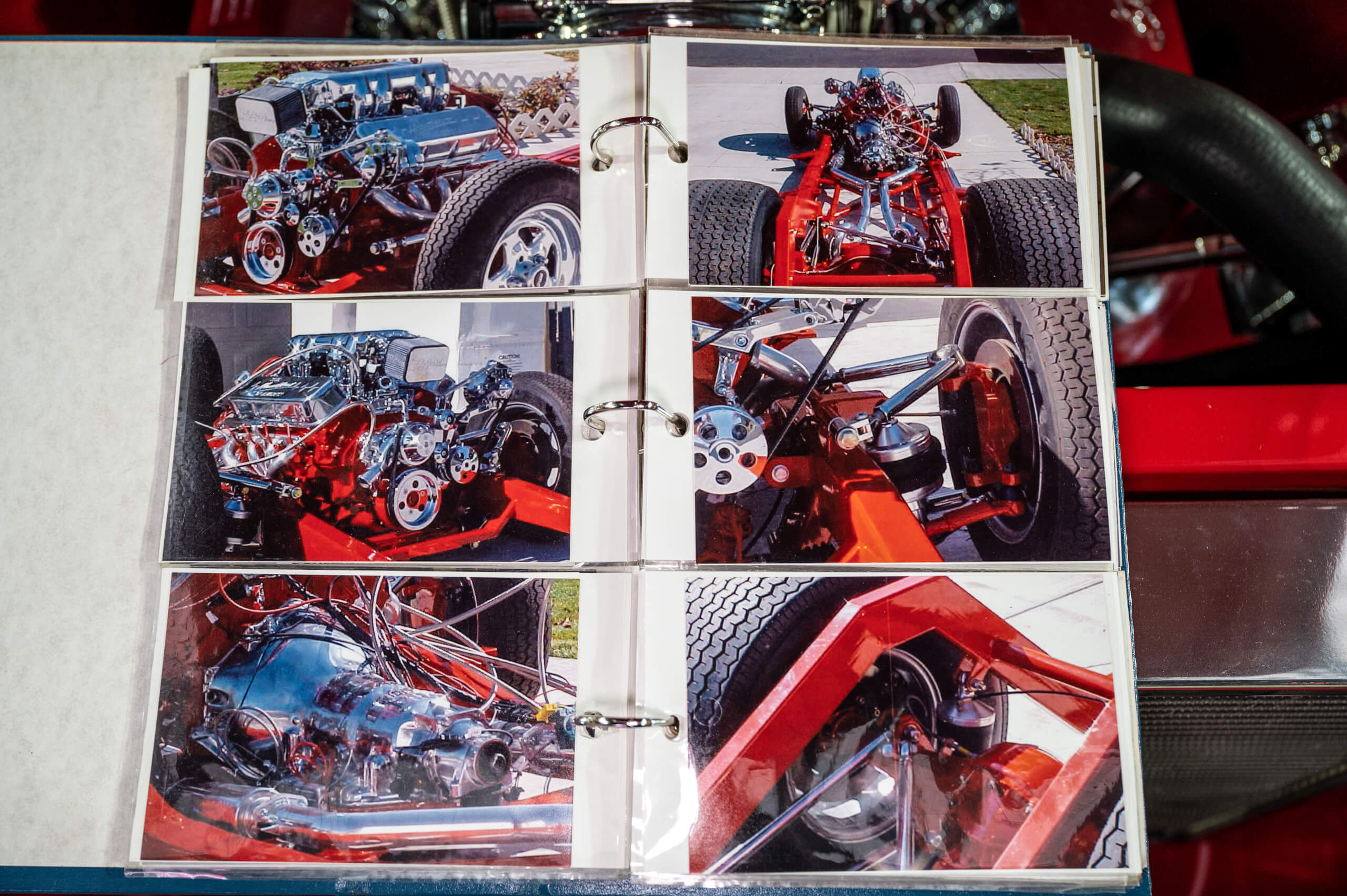 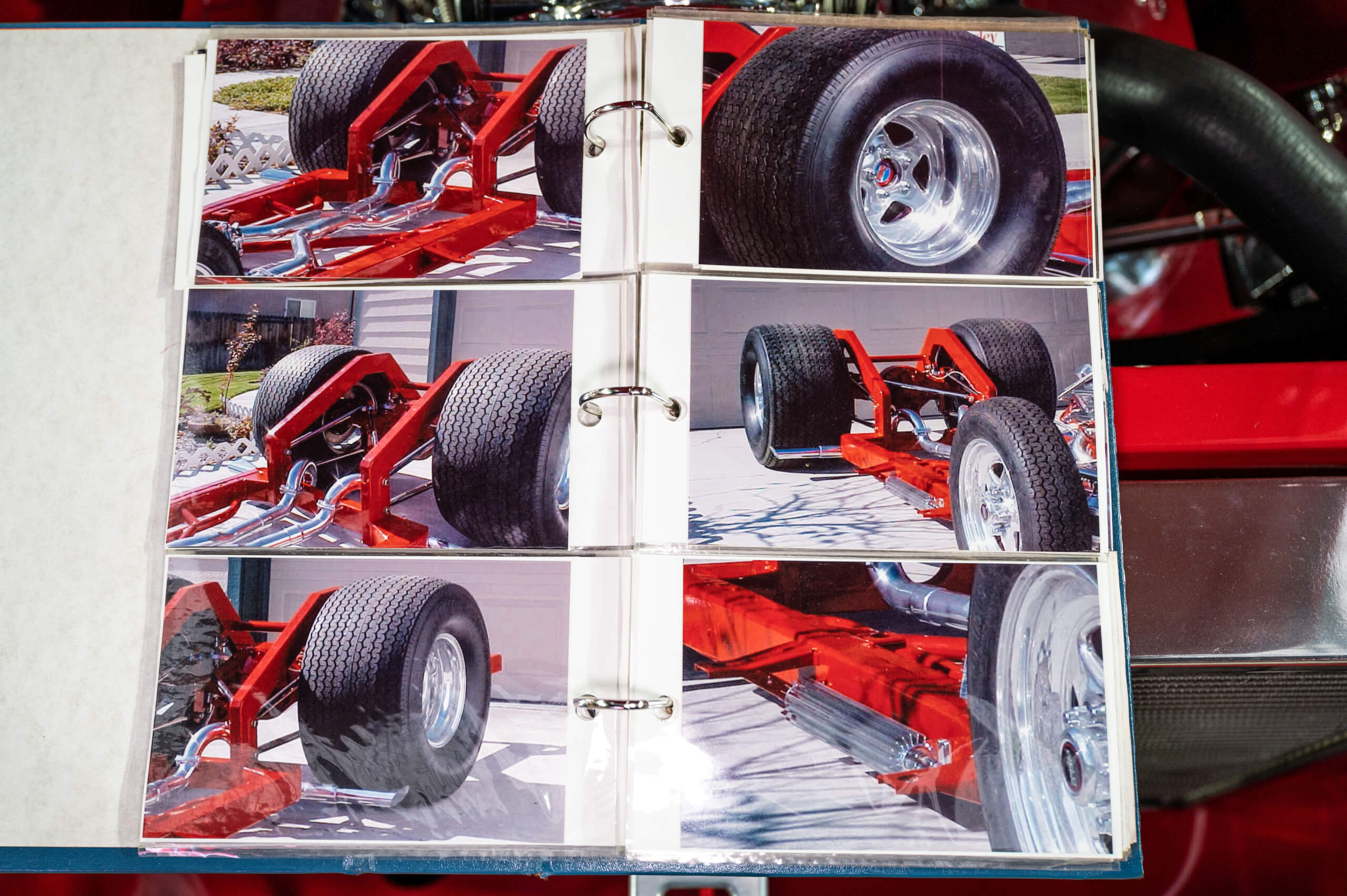 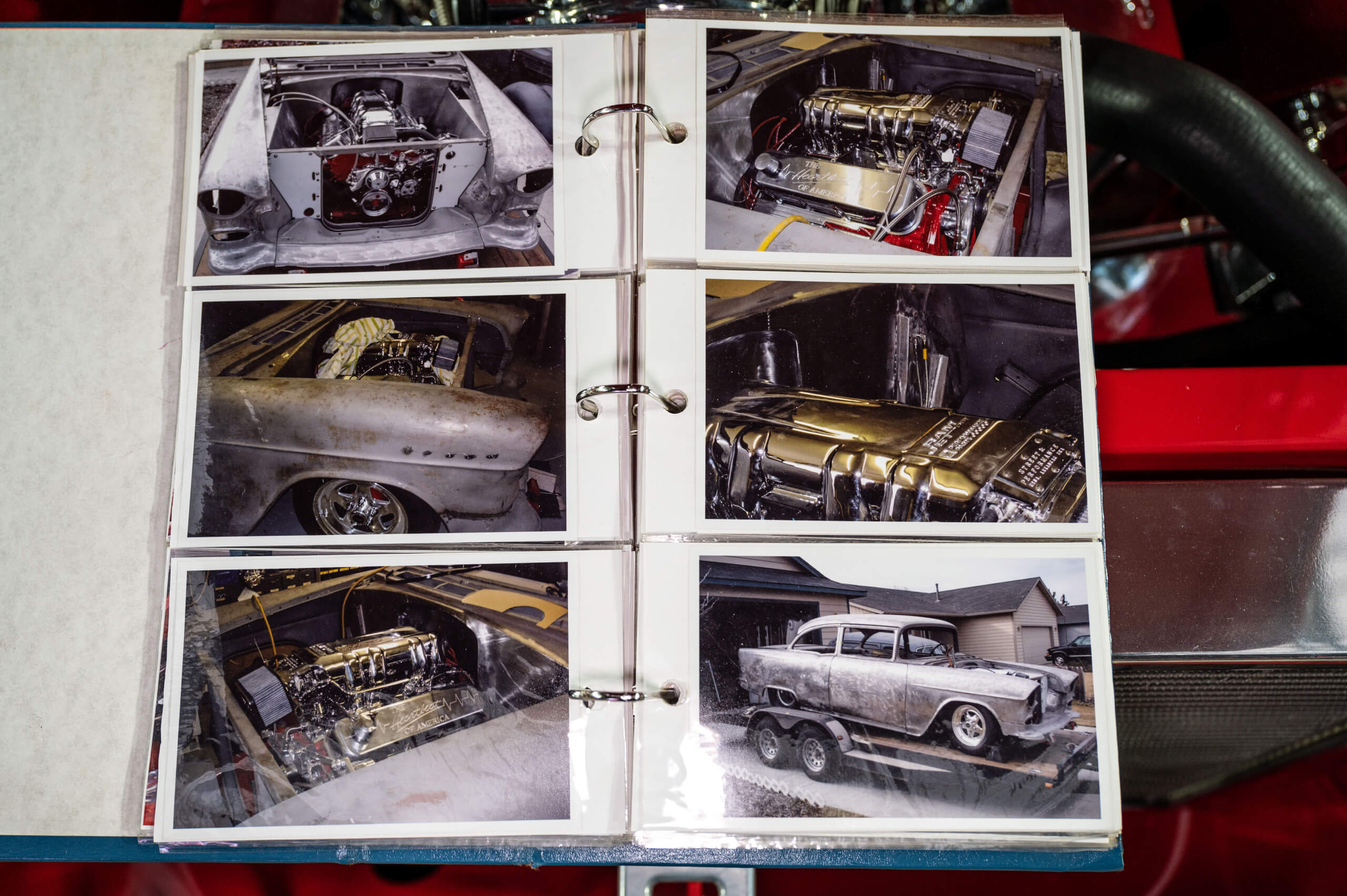 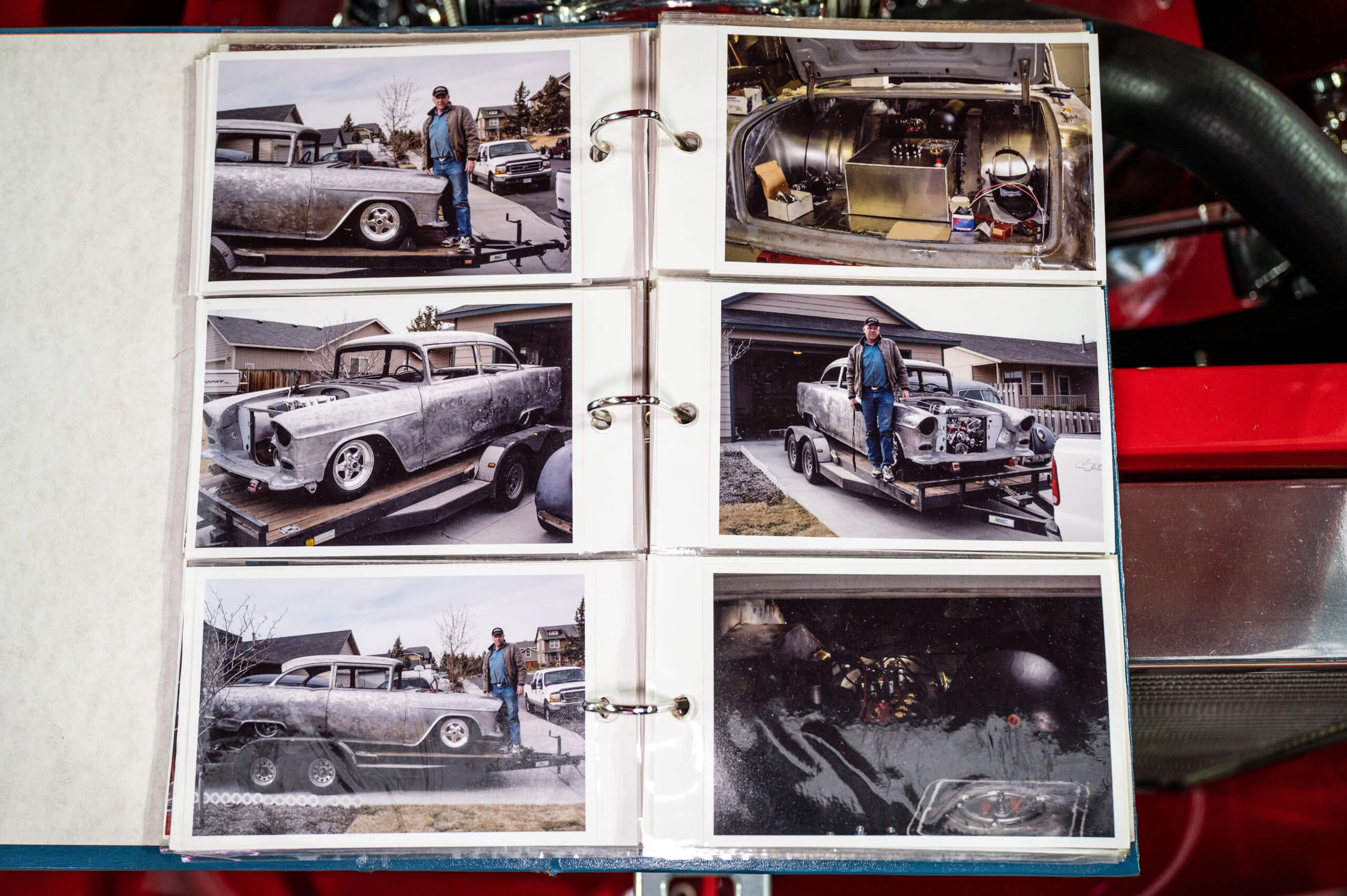 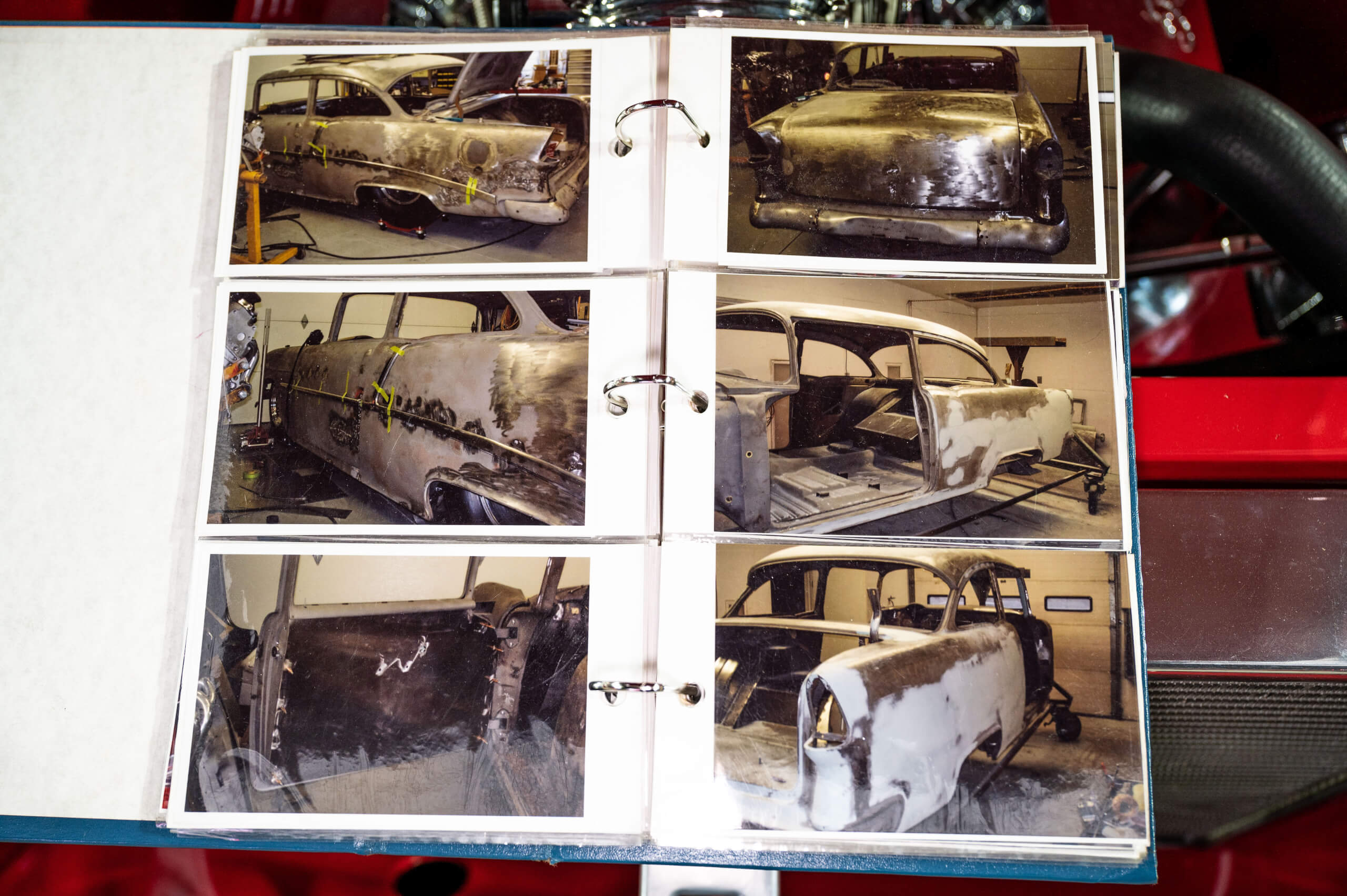 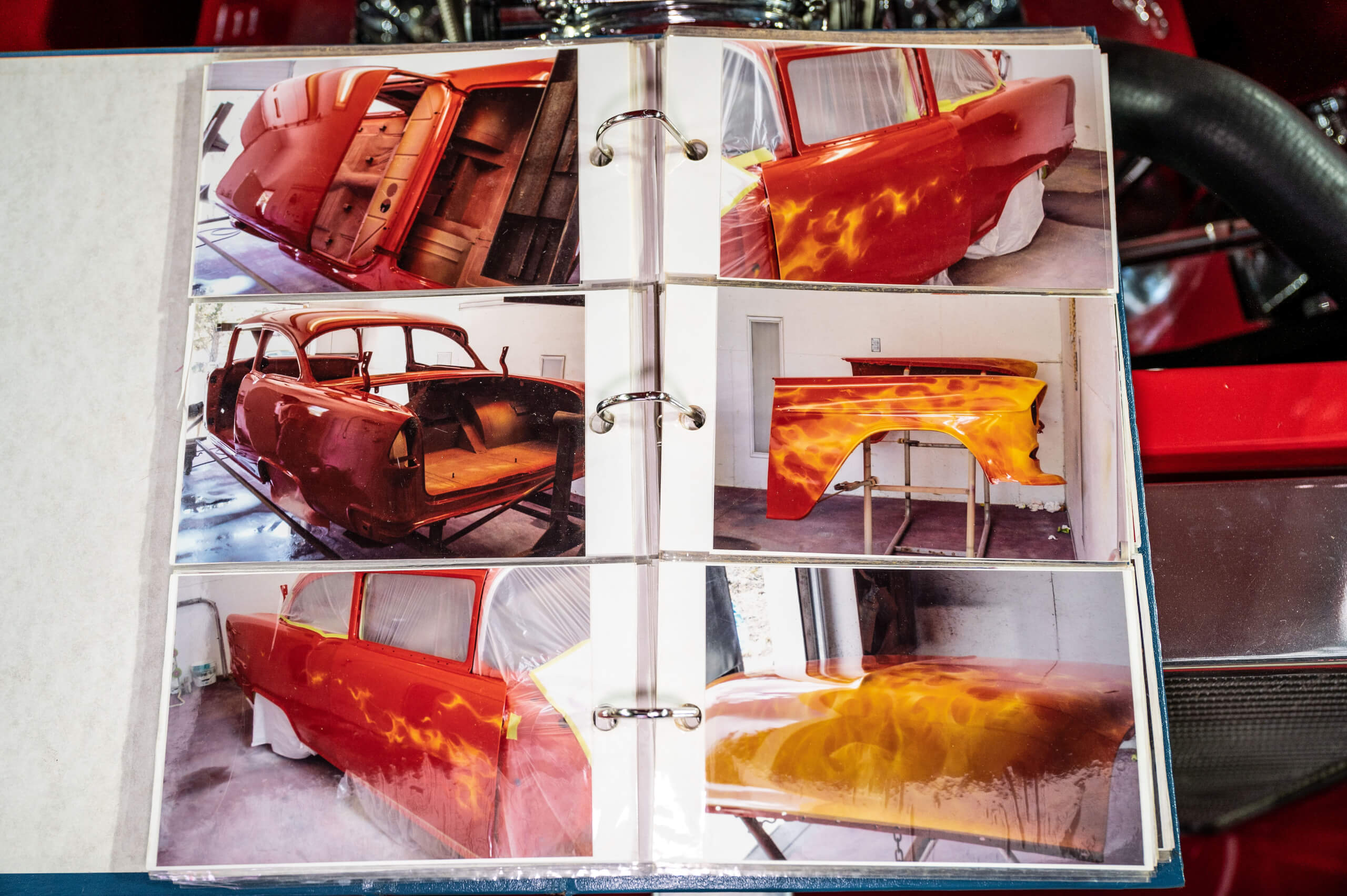 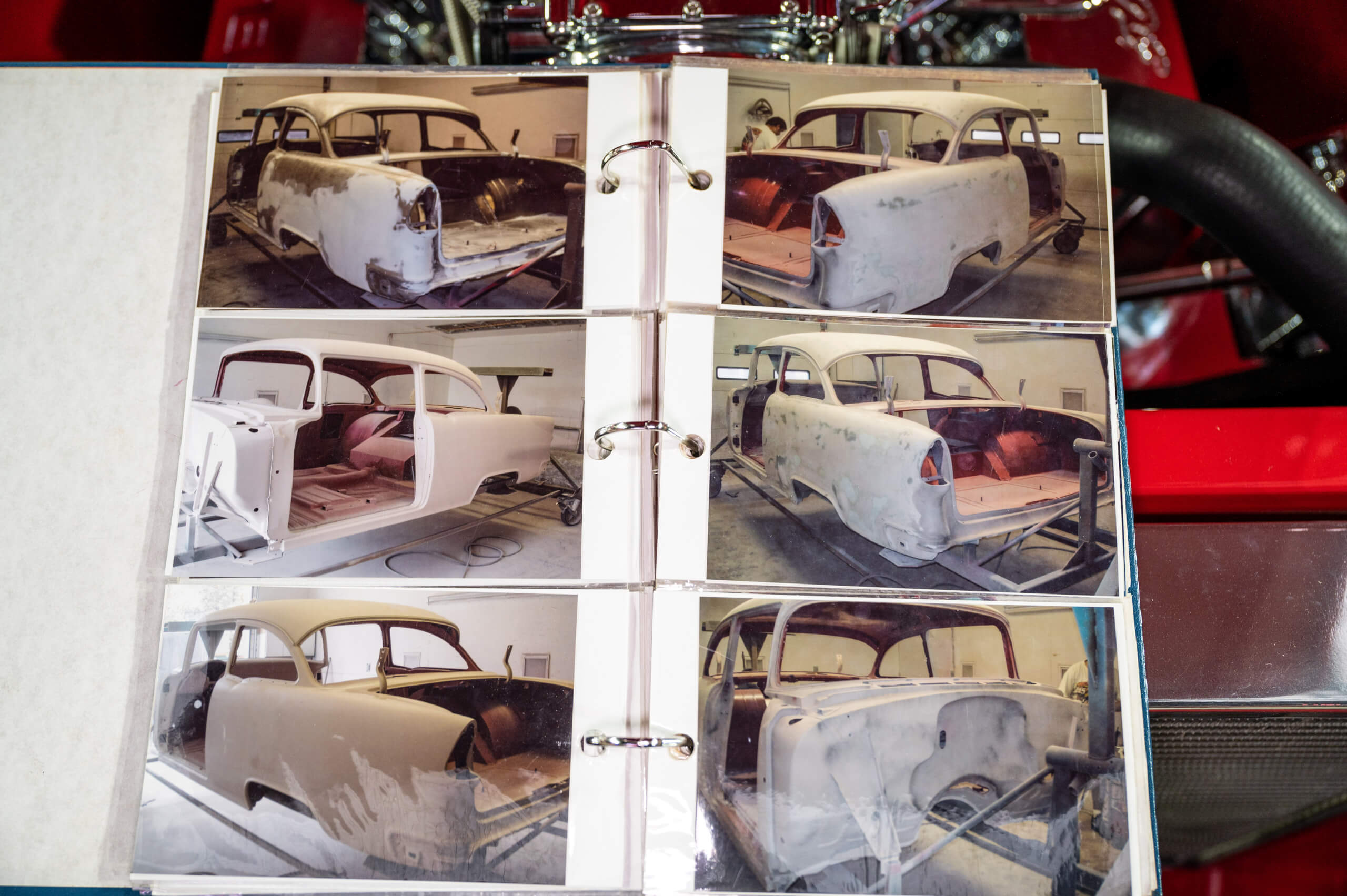 As for power, Clark doesn’t quite know the exact output but readily attests the car will easily ‘burn the tires’. One look at the extreme setup and I believe it, too. 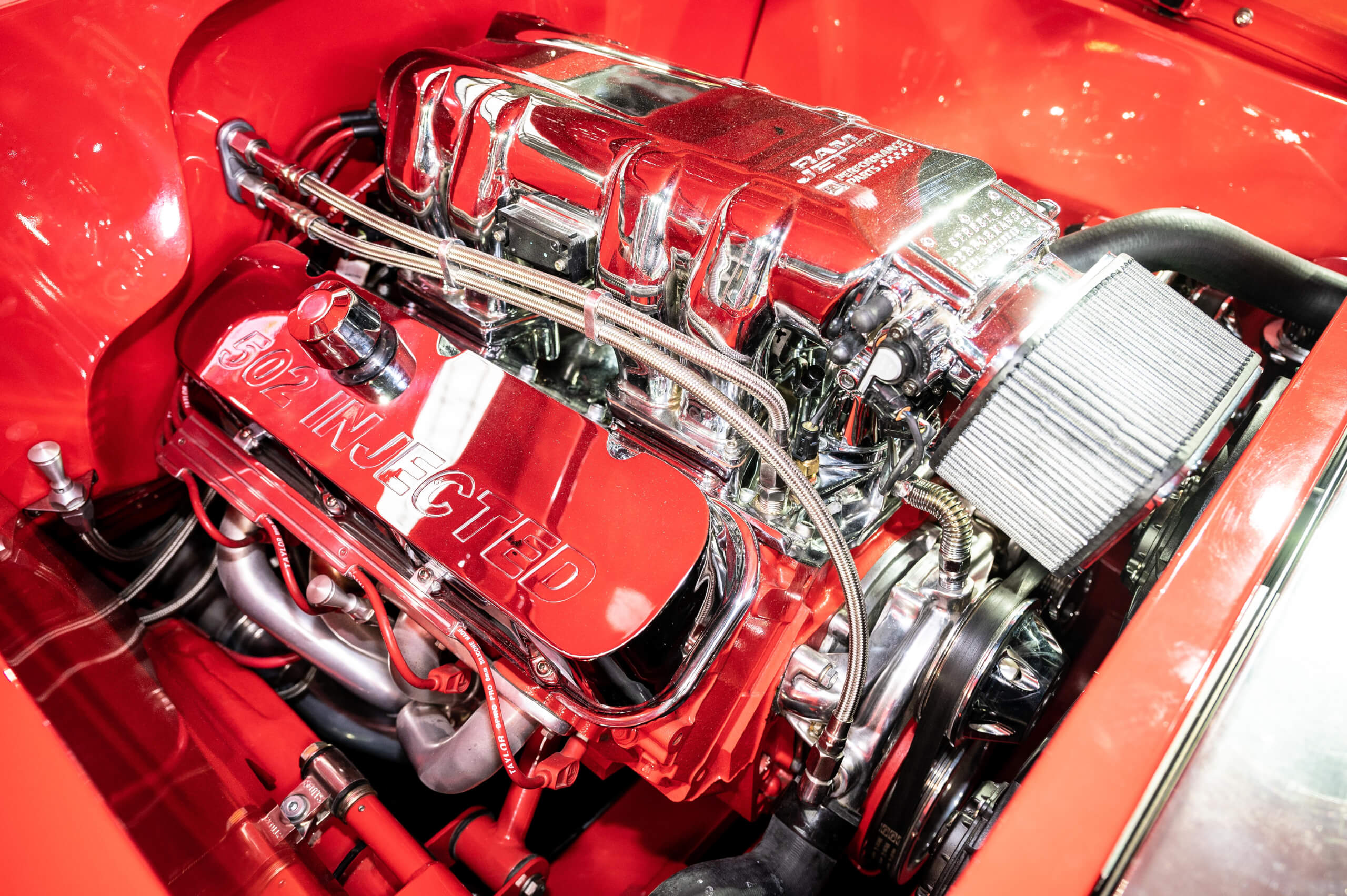 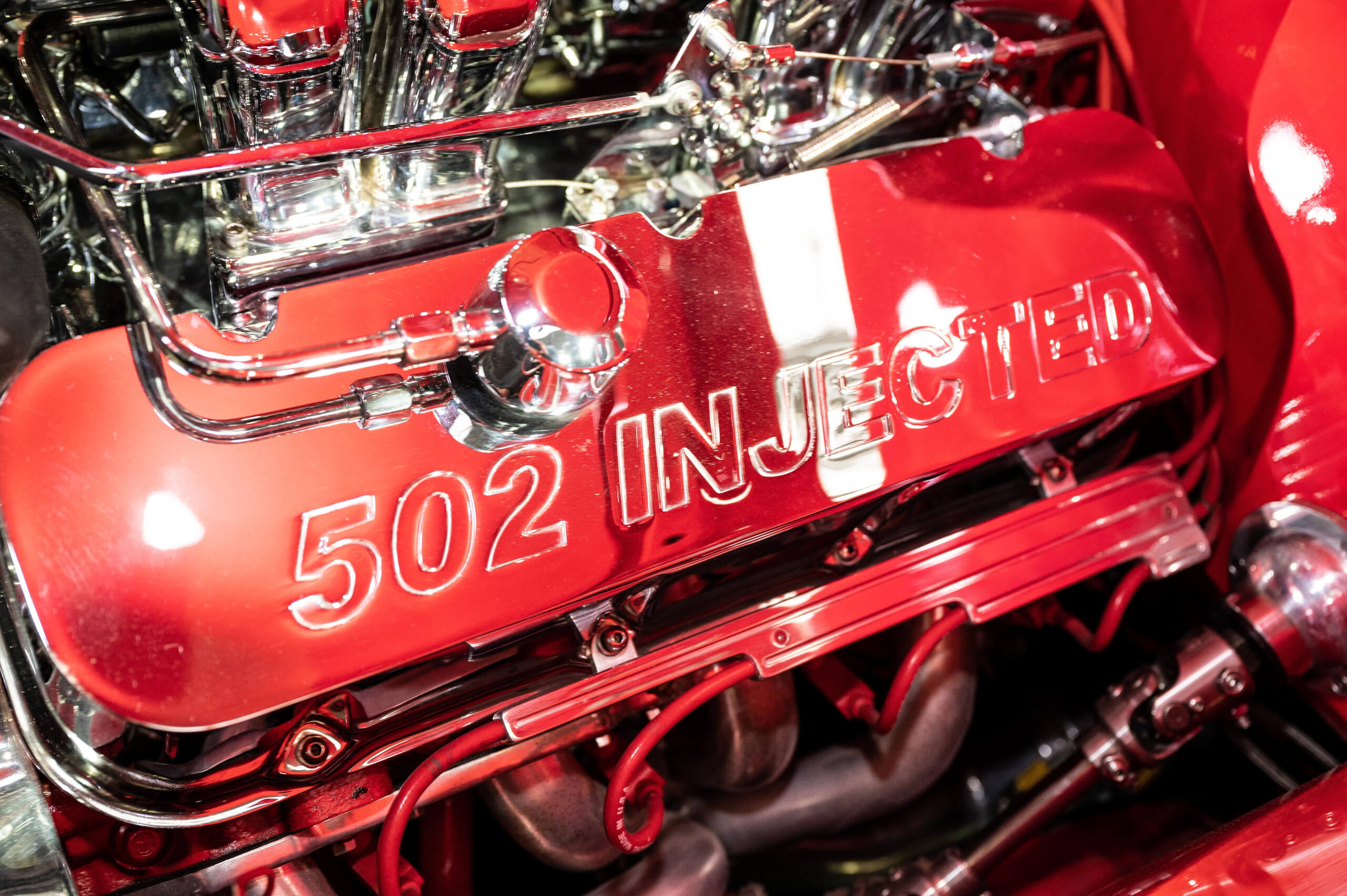 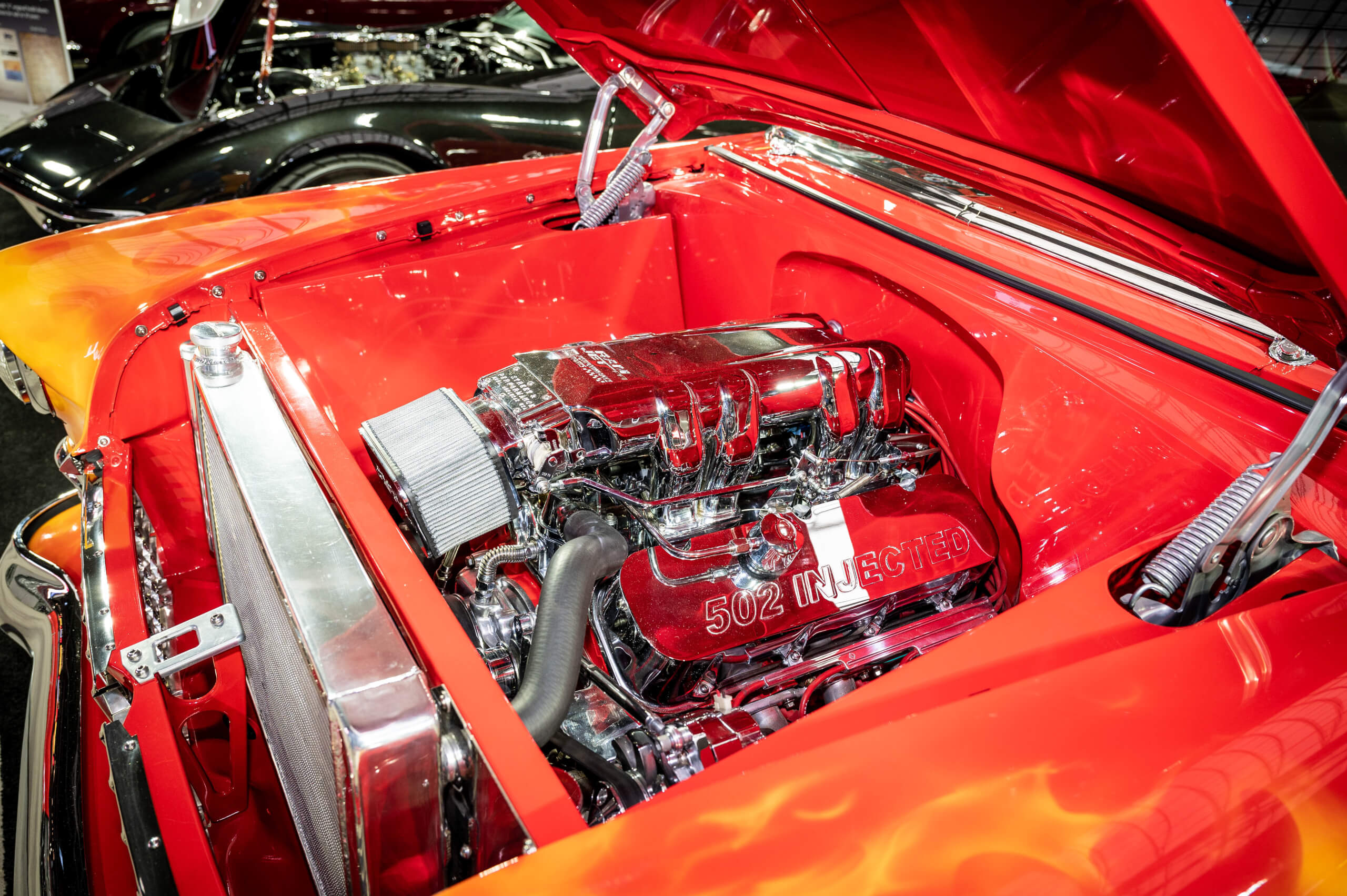 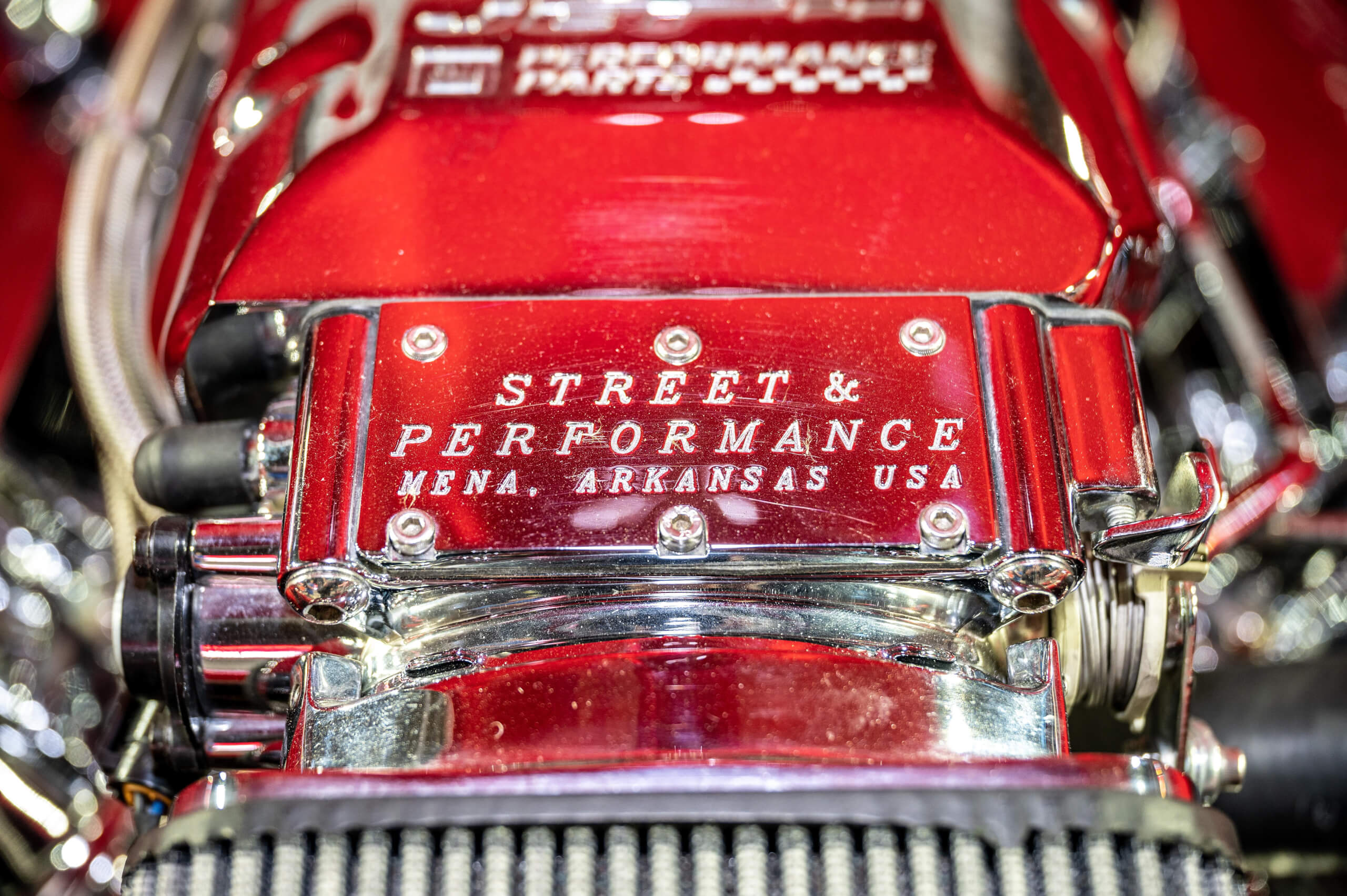 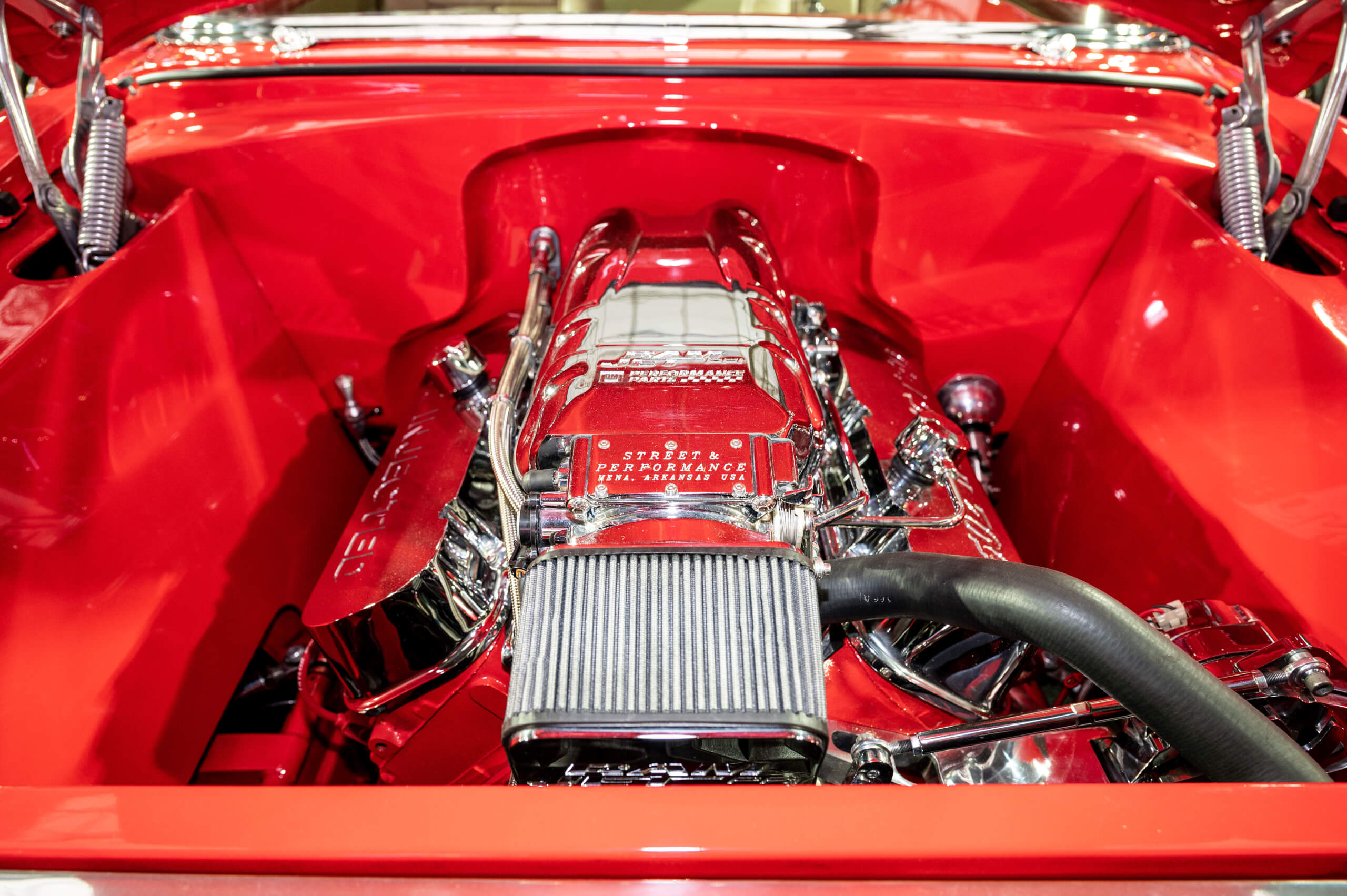 Clark shaved the 210’s exterior trim and then applied a glossy coat of Ferrari Red paint. To really heat things up, he recruited Mike Lavellee, of Killer Paint, to work his fiery magic. Lavelle applied a heavy layer of his ‘truefire flames’ to complete the look.

While Clark has overhauled dozens of 1955 Chevys, this was the first that had this kind of exterior treatment. “I always wanted to have a car with flames and this came out perfectly,’ gushes Clark.

His friend Jim Griffen helped do the interior, which features aluminum panels covered in leather. Another subtle truck is the shaving of the firewall and relocating the brake booster and other components to under the dash. Wilwood disc brakes, a fuel cell, and Ford 9-inch rear end complete the package, which was finished in 2008. 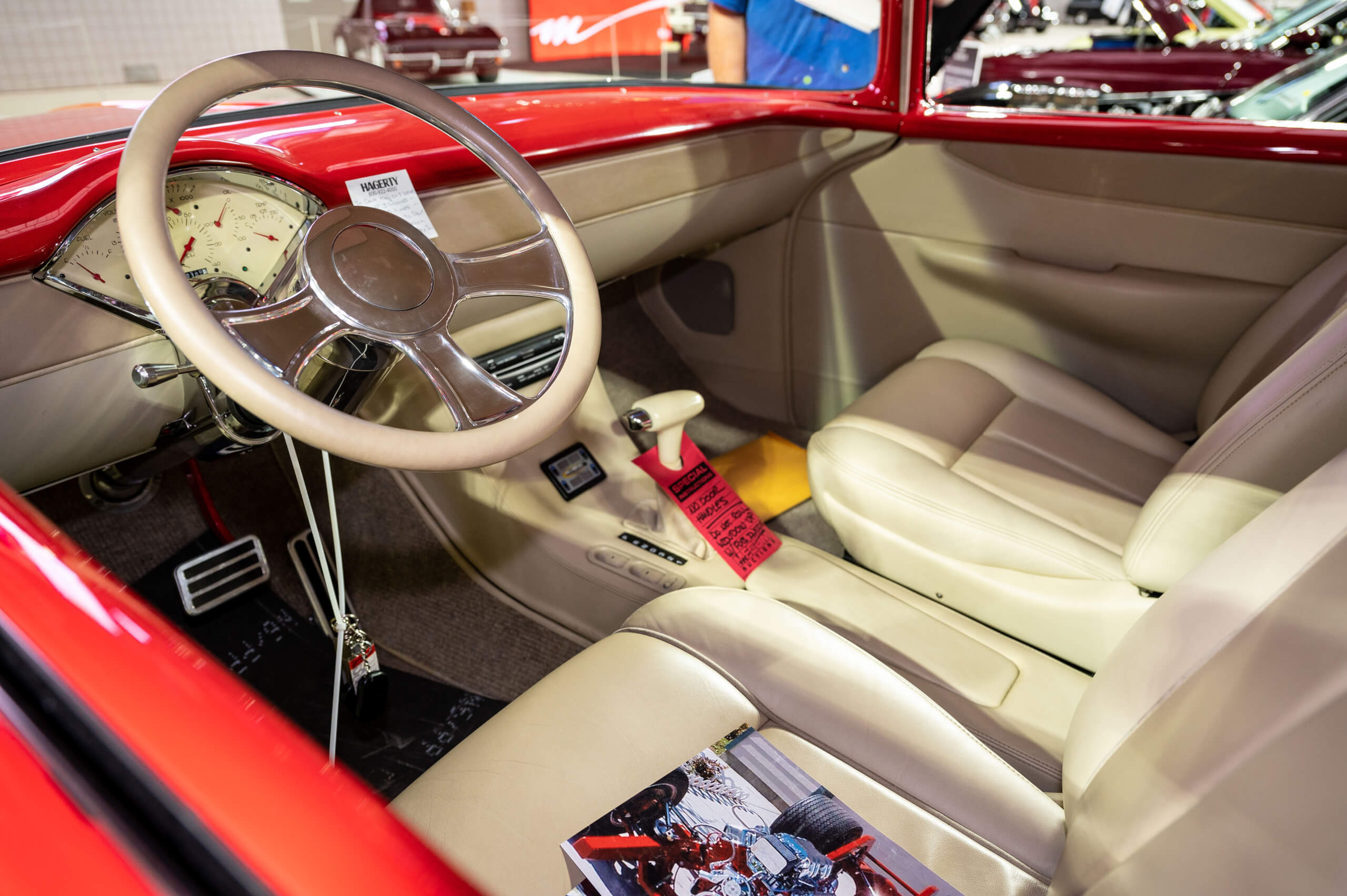 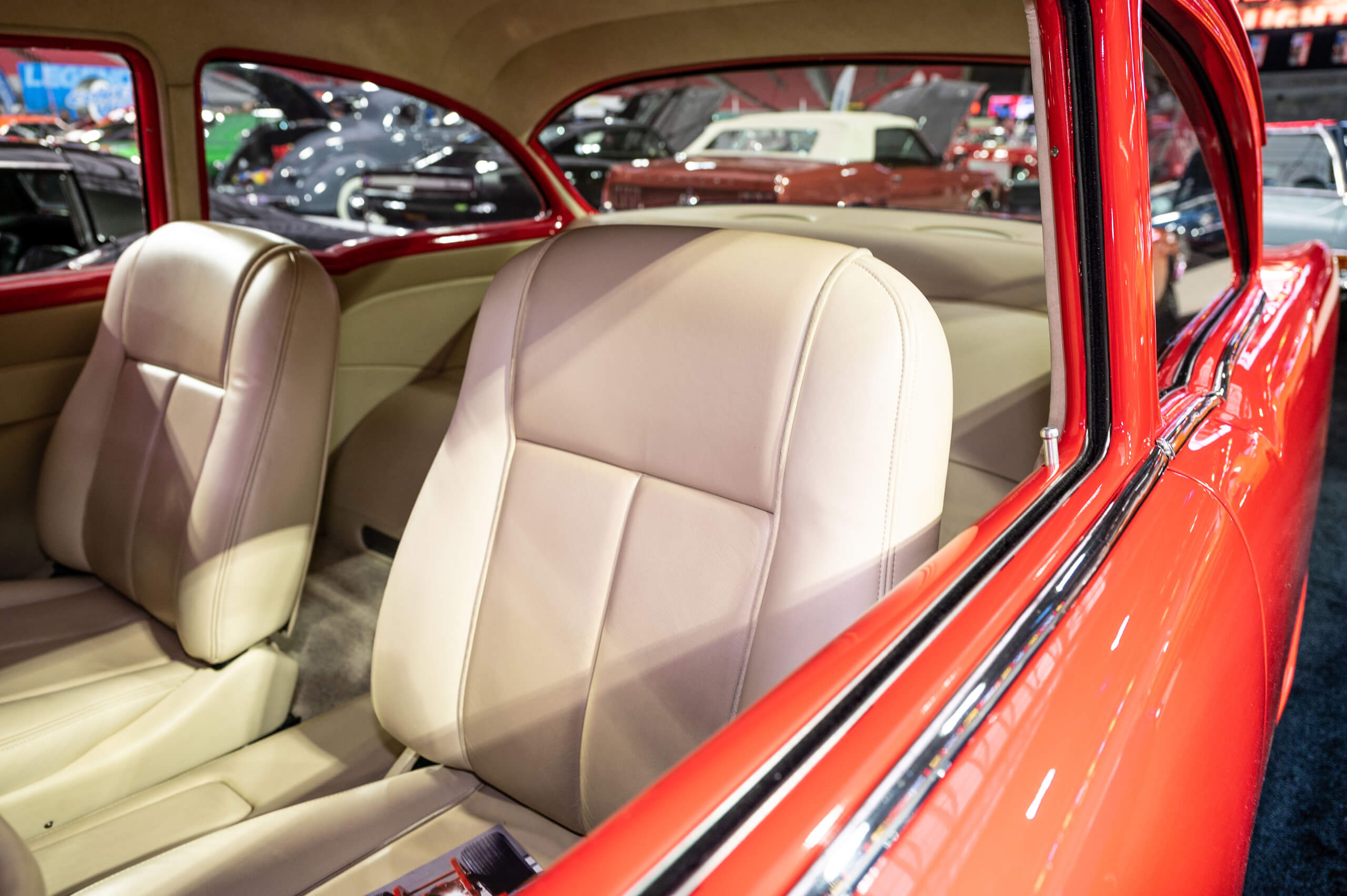 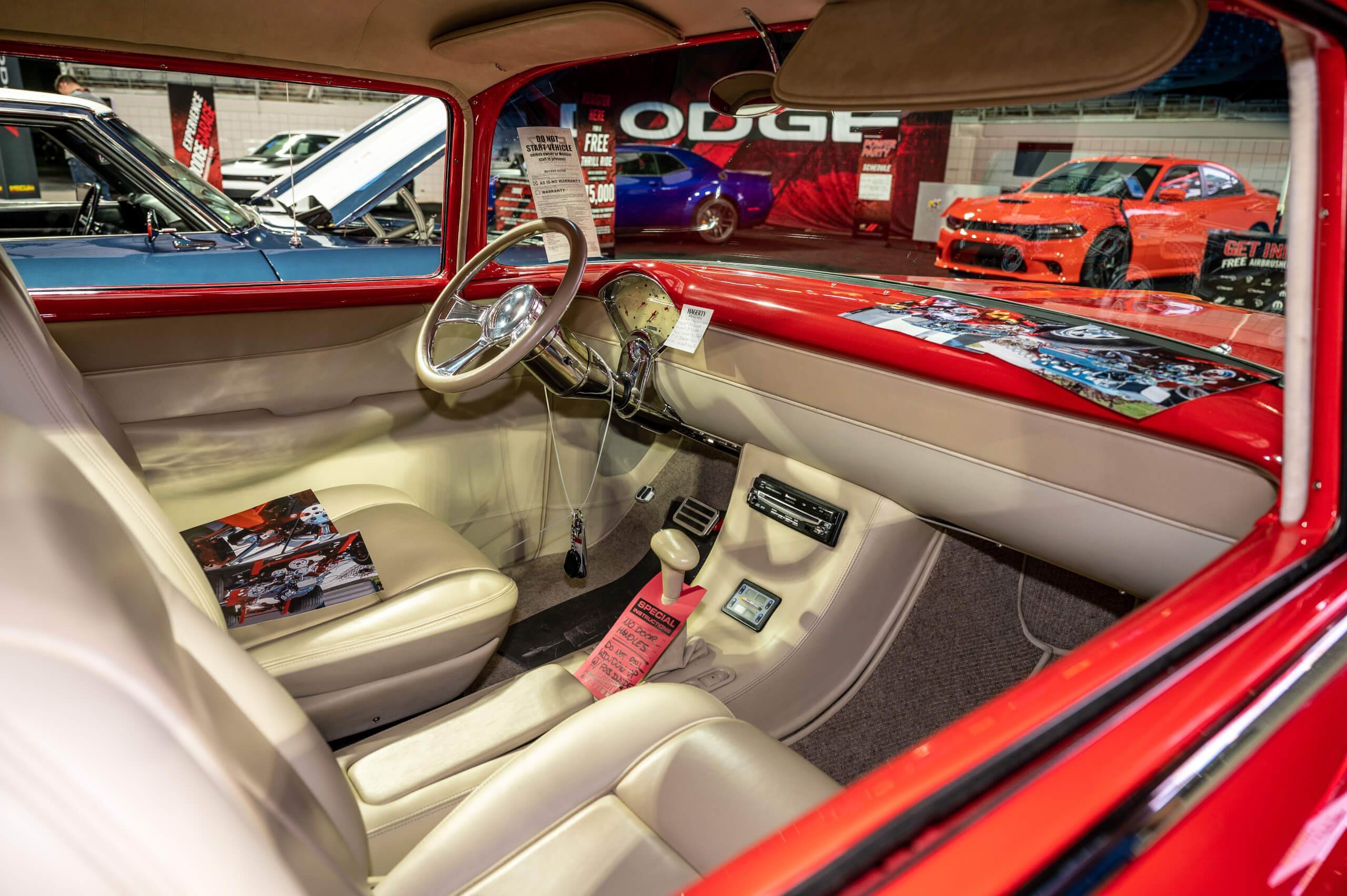 After a brief year of enjoyment, Clark sold the modified 210 to a friend. Clark needed room to move on to yet another 1955 project, this time a convertible. He’s already finished it and is on to even more overhauls and builds.

I caught up with Clark, and the ultra-hot ride he built, at Mecum’s 2020 Glendale, Arizona, auction. His friend and owner is selling the car and asked Clark to come down and speak to his craftsmanship. “They’re fun cars to build,’ explains Clark. “Once I finish one I’m already on to the next.”