You hear this a lot from the car show camp. No wonder: they’ve spent tens of thousands of dollars on their car’s paint alone, and searched for months, even years, for correct date-code or NOS parts. These cars are kept in climate-controlled garages. Their car care kits include dental picks and toothbrushes. Not only is there paper covering the carpet, the pedals often wear socks.

On the other side of the hobby are the folks who drive their collector cars. For them, reliability beats authenticity. Reproduction parts are preferred over pricey, hard-to-find matching-numbers components. Maybe bias-ply tires were factory equipment, but radials drive so much better. Their show is the local cruise night or donut shop gathering. Hot Rod Power Tour stickers are badges of honor.

To them, a car that’s “too nice to drive” is a real shame. Cars were built to be driven, after all. To reduce them to essentially a static piece of art that only rolls on and off a trailer is a waste of the car’s potential, especially if that car was built for enthusiast driving, like a classic muscle or sports car.

Then again, the other side of the argument is that there’s immense value in preserving these historic vehicles for future generations. Our kids, their kids and so on will have no idea what our car-centric world was like without examples to show them. Driving these valuable collectibles merely accelerates their deterioration.

Which Side Are You On?

We found a collector in Southern California with a foot in both worlds and a deep appreciation of each. Joe Salvo owns an award-winning, concours-quality 1970 Chevrolet Chevelle SS396 and a super-muscular (650 HP) 1968 Dodge Dart Hemi that he drives. Granted, it’s a tribute, originally a Dart GT with a Mopar Performance Hemi transplant, but Salvo drives the wheels off it.

“I’m really lucky that I get to enjoy both,” Salvo said. “When I drive the Dart, I feel like I’m 16 again, not 62. And I get a lot of satisfaction out of working on the Chevelle so that it’s not only a ‘nice’ car but one that is nice and accurate.” 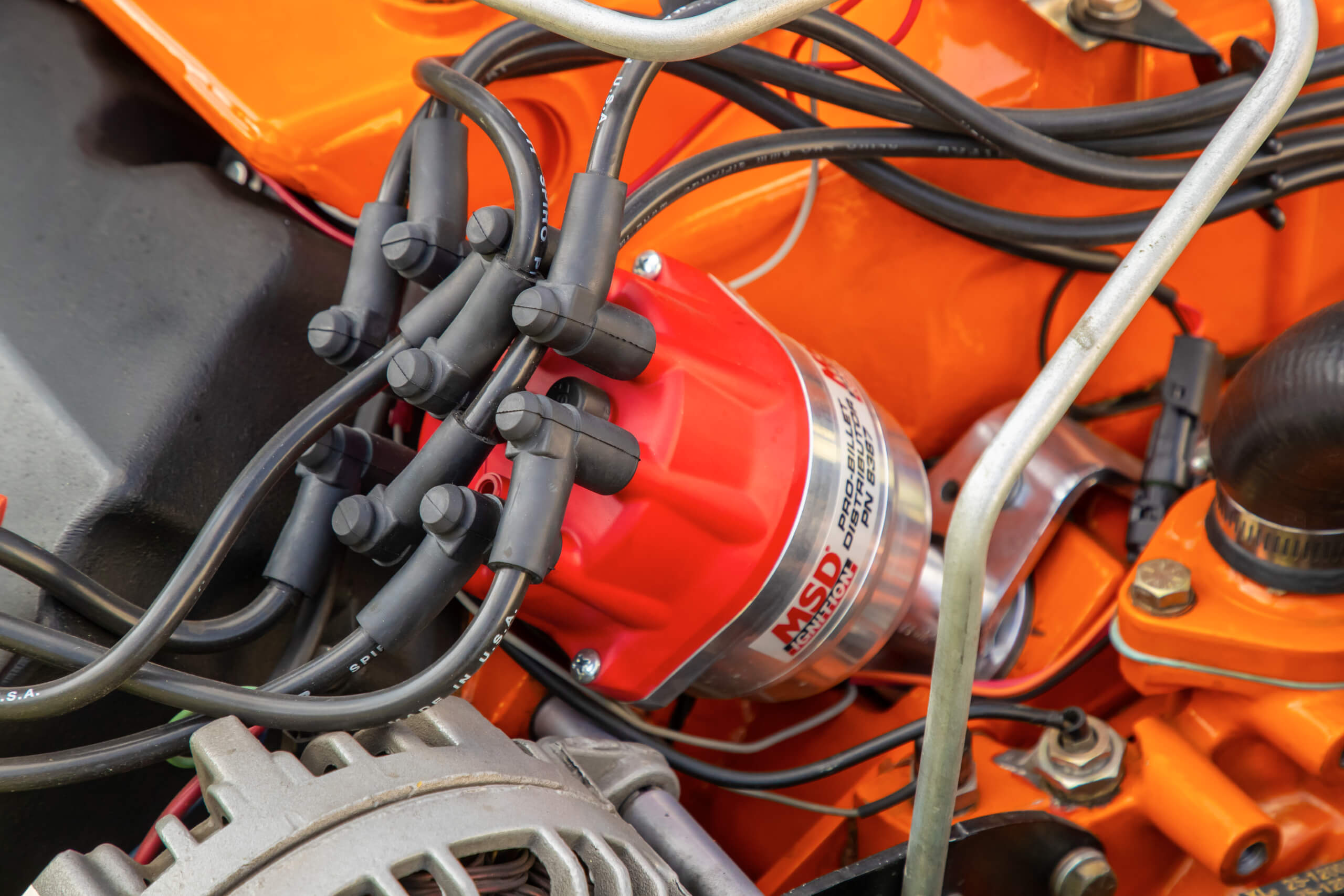 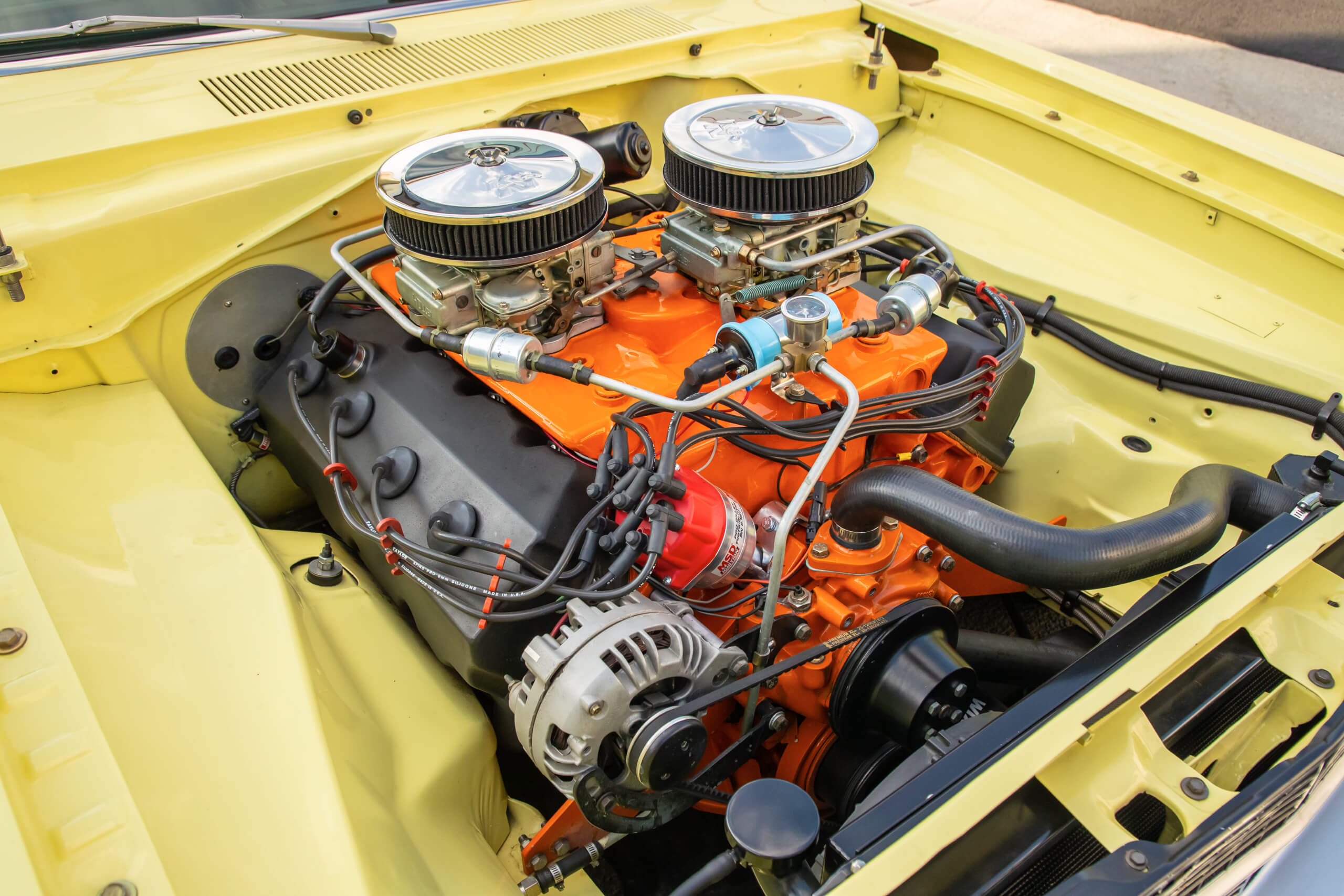 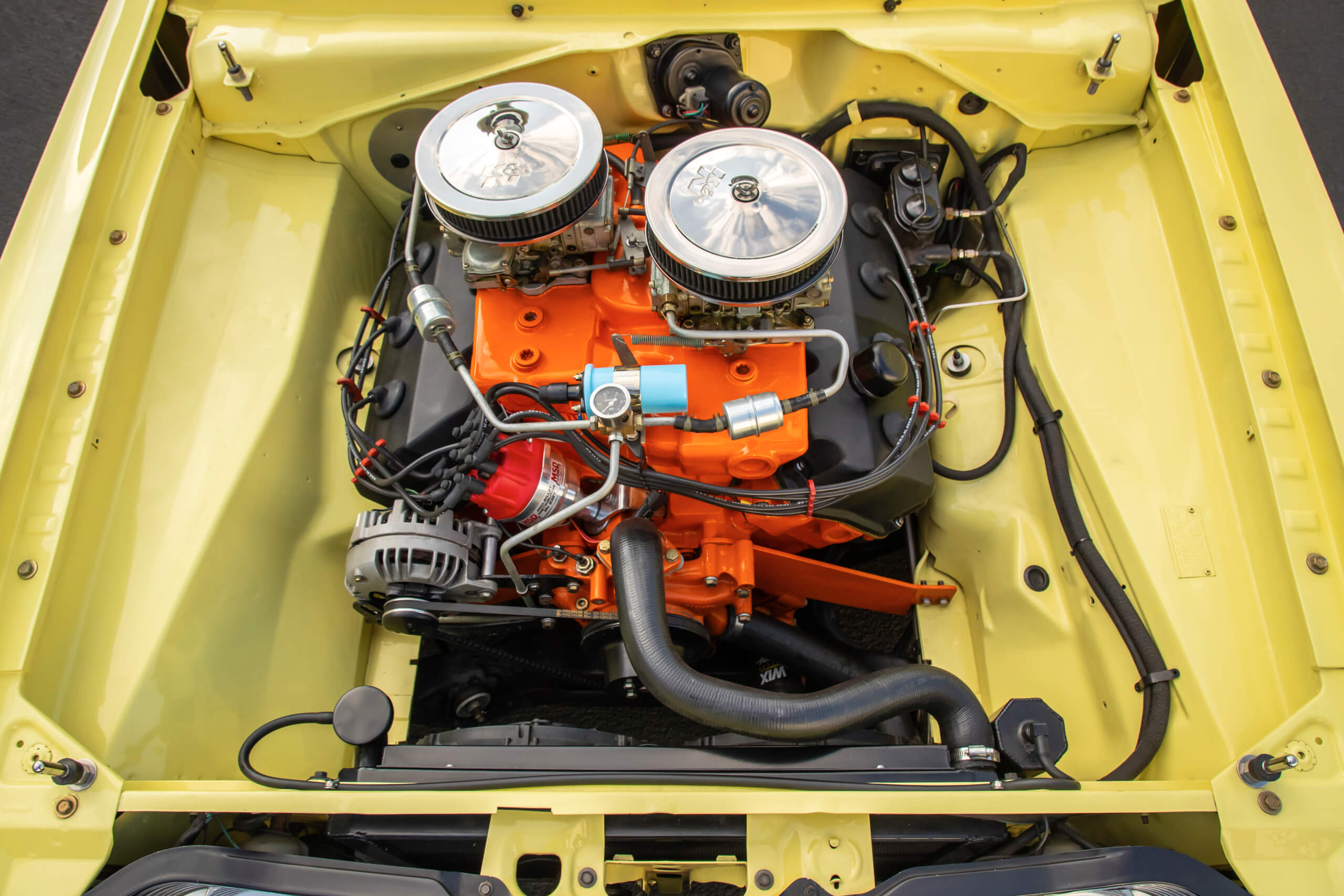 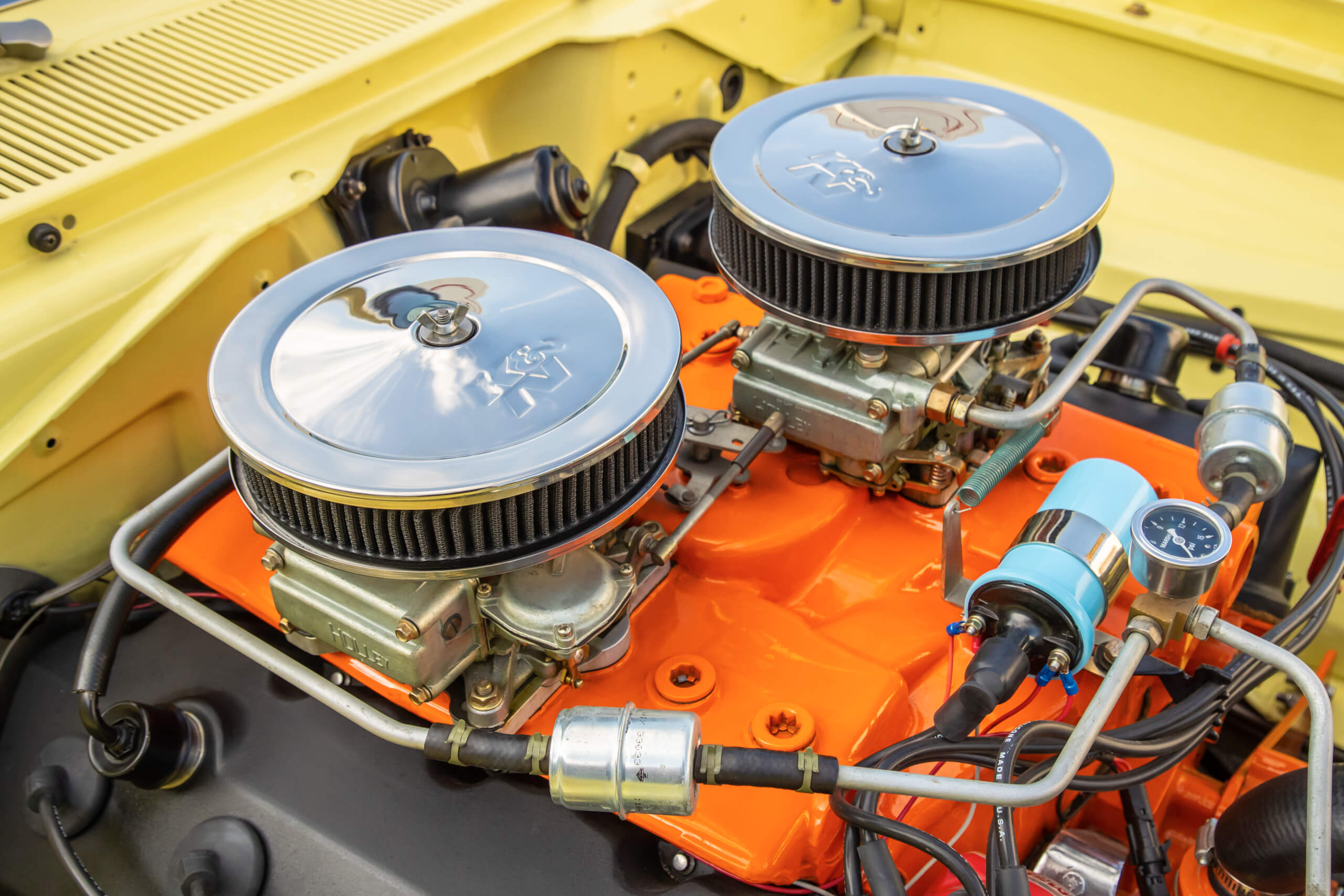 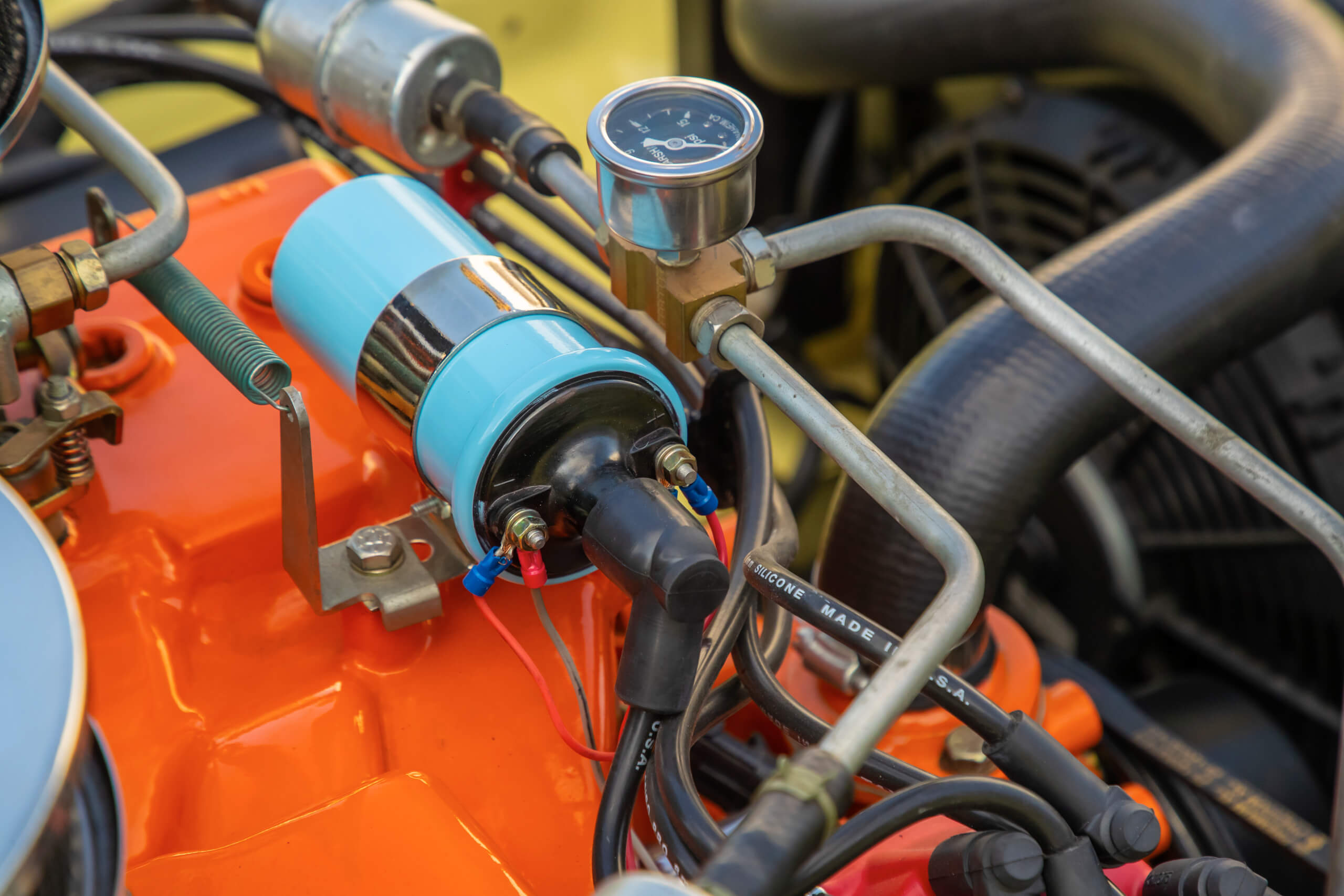 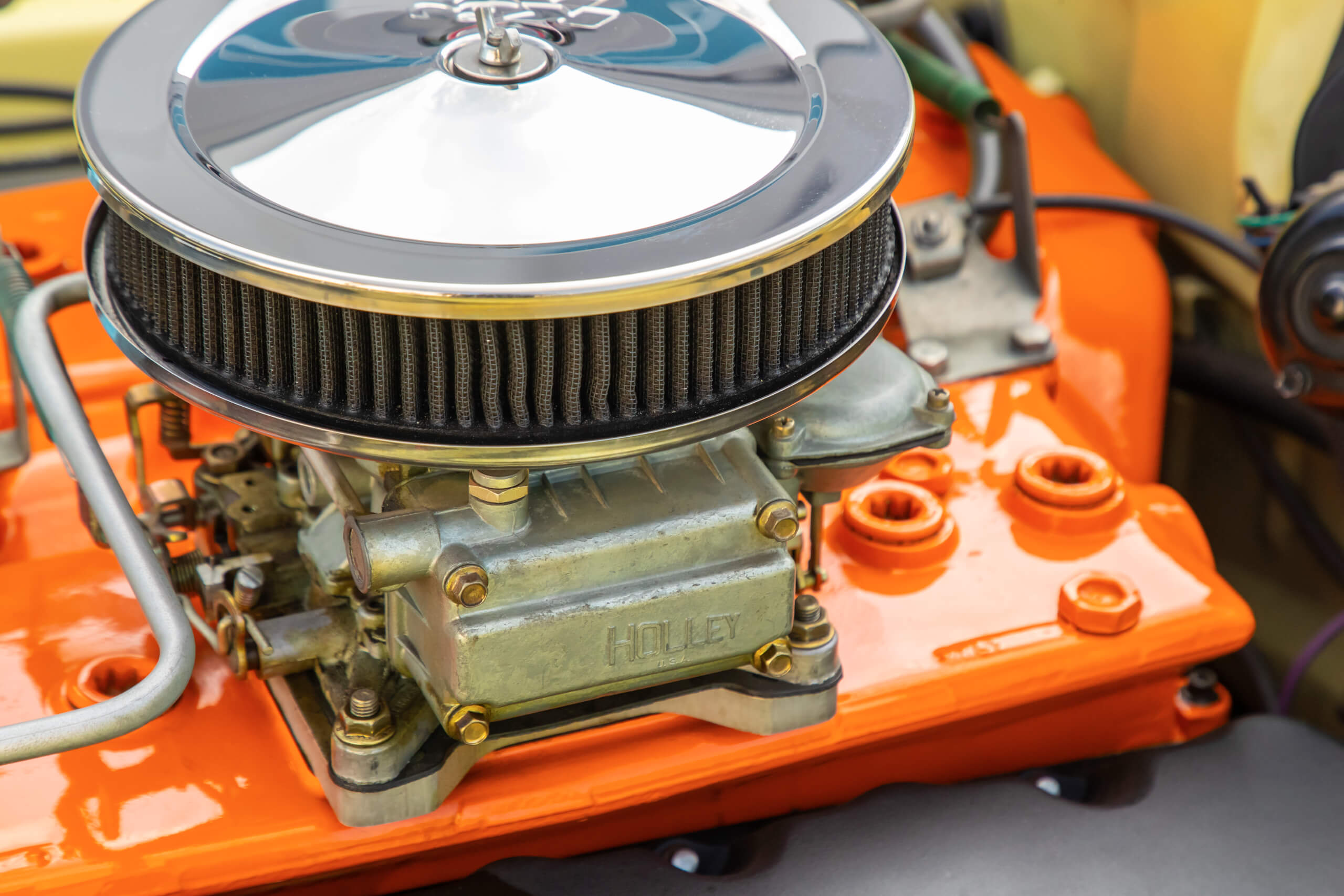 Accuracy is a common thread to both cars. True, the Dart has some concessions to drivability, “but I like my drivers to be as accurate as they can be,” Salvo said. “I’m not a Resto Mod guy.” So yes, the Dart has been fitted with a custom Matson radiator, installed after moving the core supports out as far as possible. That will actually cool the Hemi while in SoCal traffic while four-wheel disc brakes and a Gear Vendors over/underdrive keep the Elephant motor loping along at low revs on the freeway.

Yet the car clearly shares lineage with the limited-production LO23 Hemi Darts built by Hurst in 1968, from its big-and-little tire combo, stock torsion-bar front suspension and fiberglass hood and fenders to the full rollcage, A100 van seats, and wide competition lap belts. “It has the sights and smells of the 1960s, but it will run on the freeway and actually stop if something pops out in front of me.” 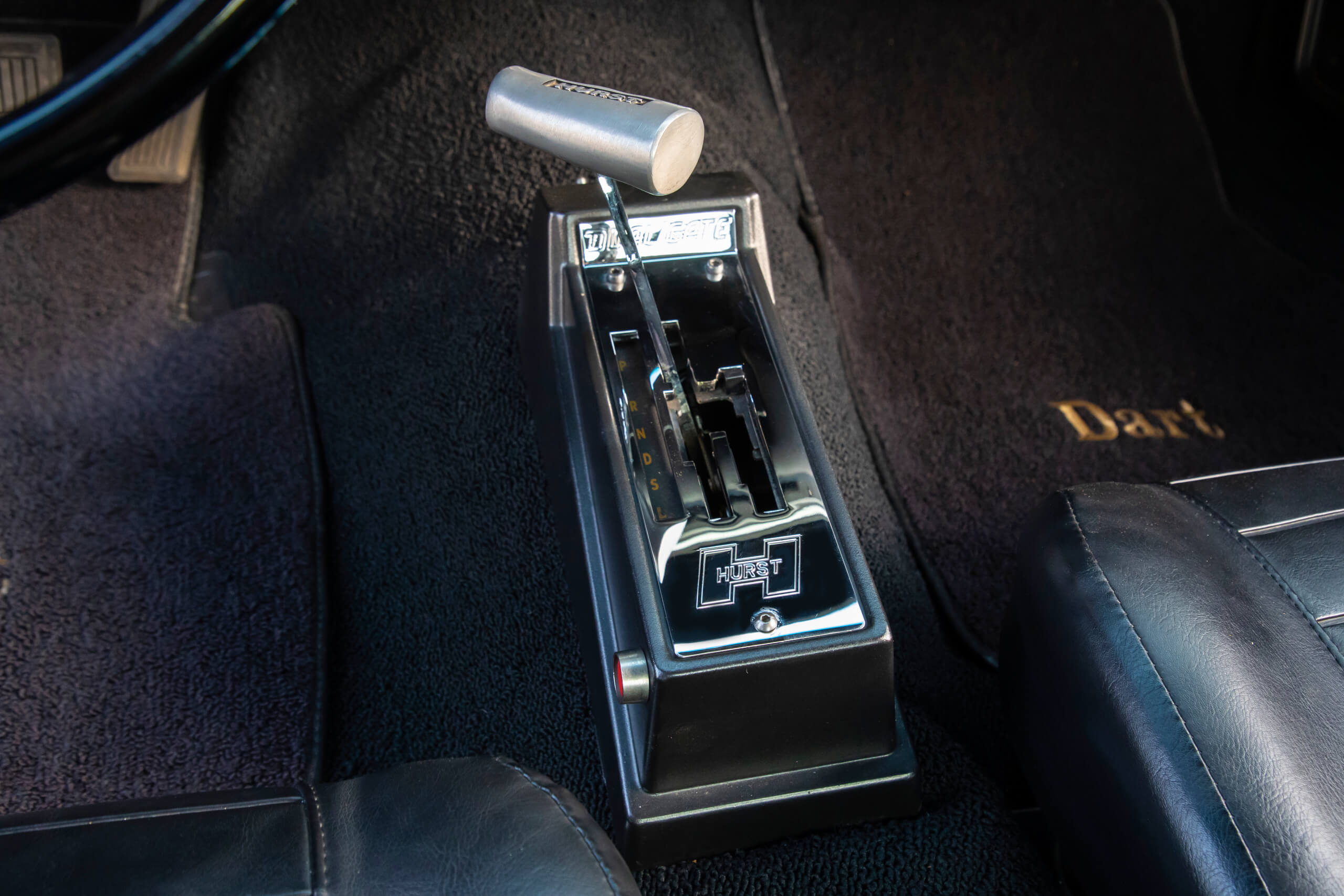 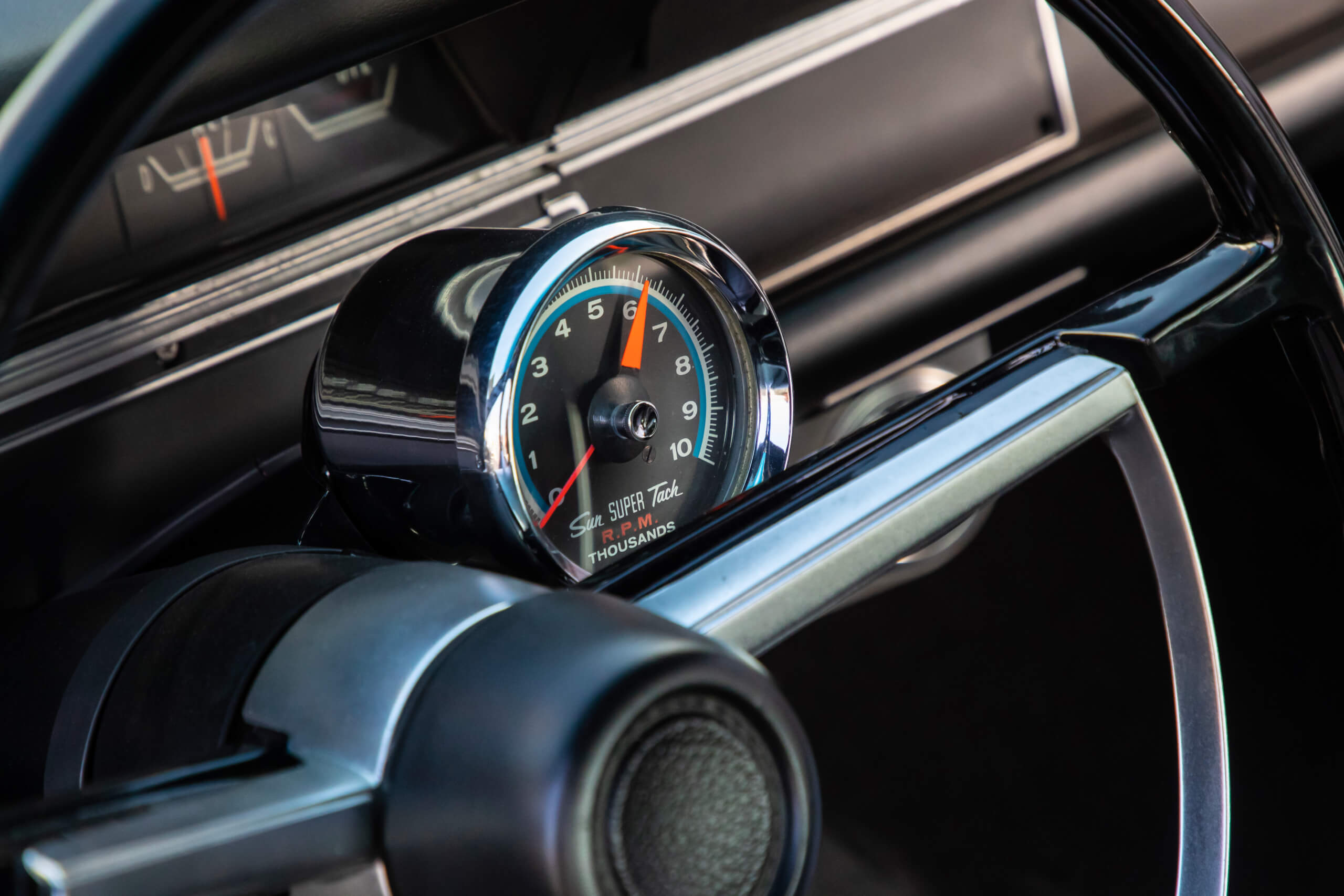 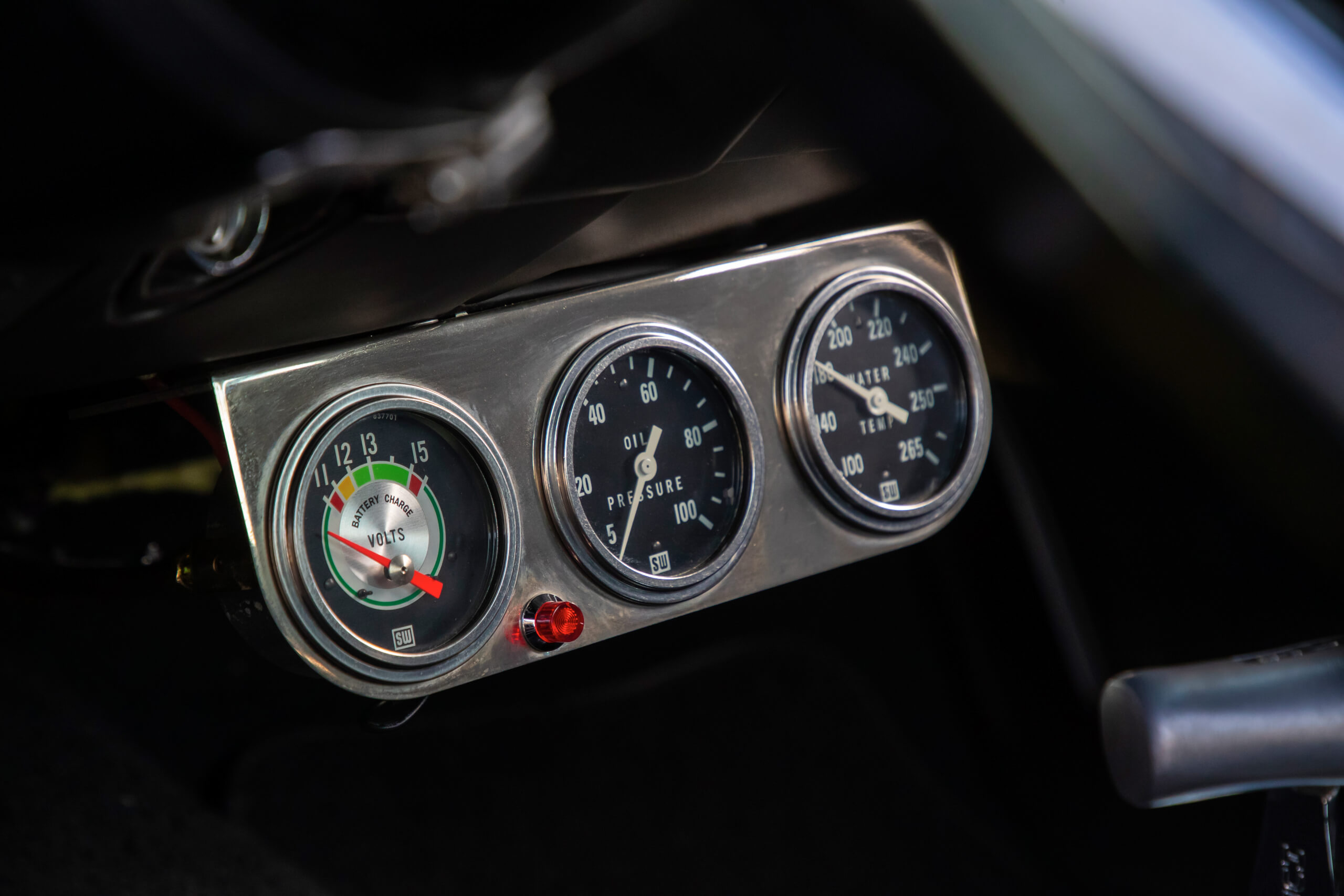 Where Salvo truly indulged his desire for accuracy was with the Chevelle. When he bought it in 2007, it was already an AACA Junior and Senior award winner. But he learned from showing the Chevelle that, though it presented well thanks to an earlier restoration, it wasn’t correct. That’s a big deal at a top-tier car show or Concours d’Elegance. 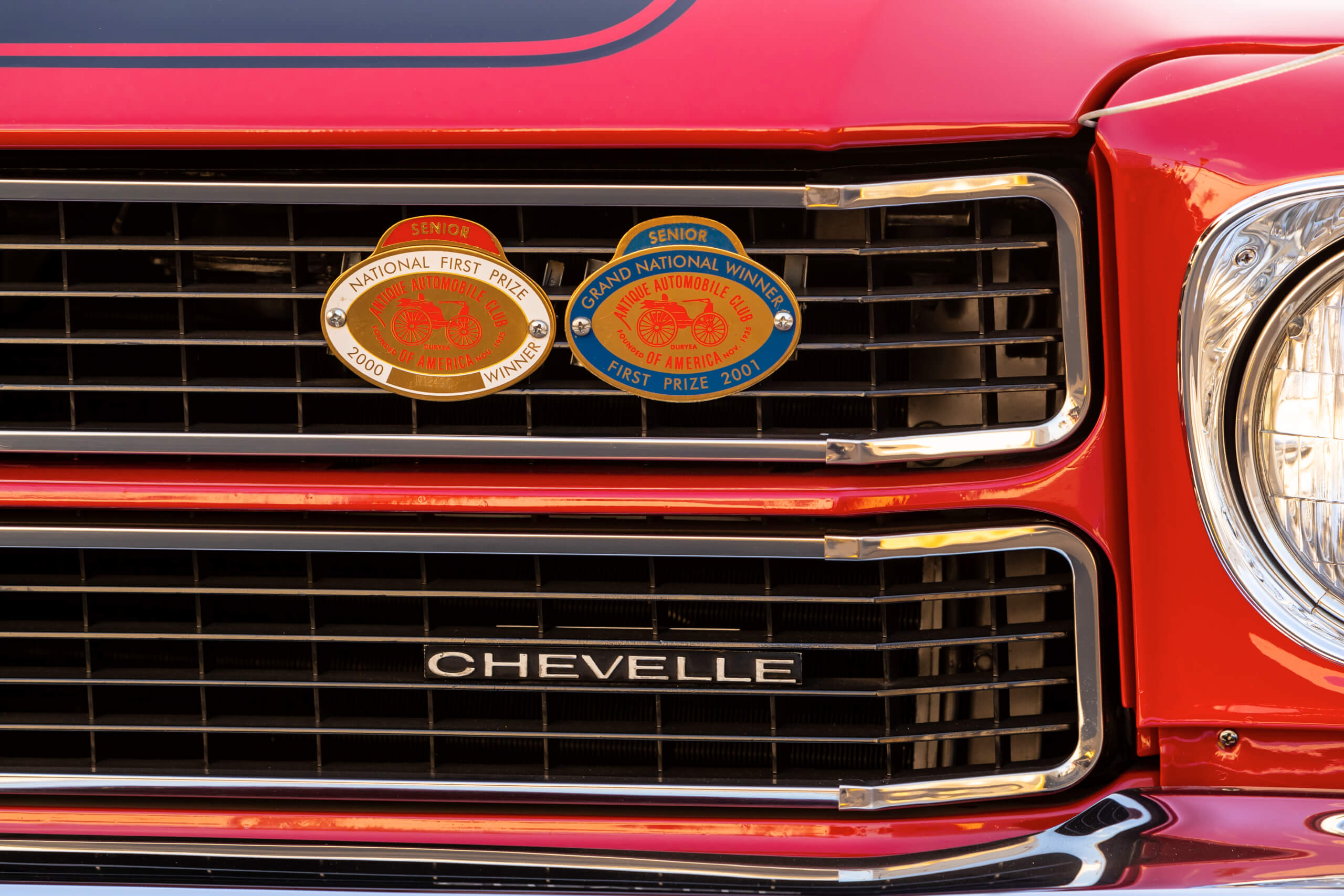 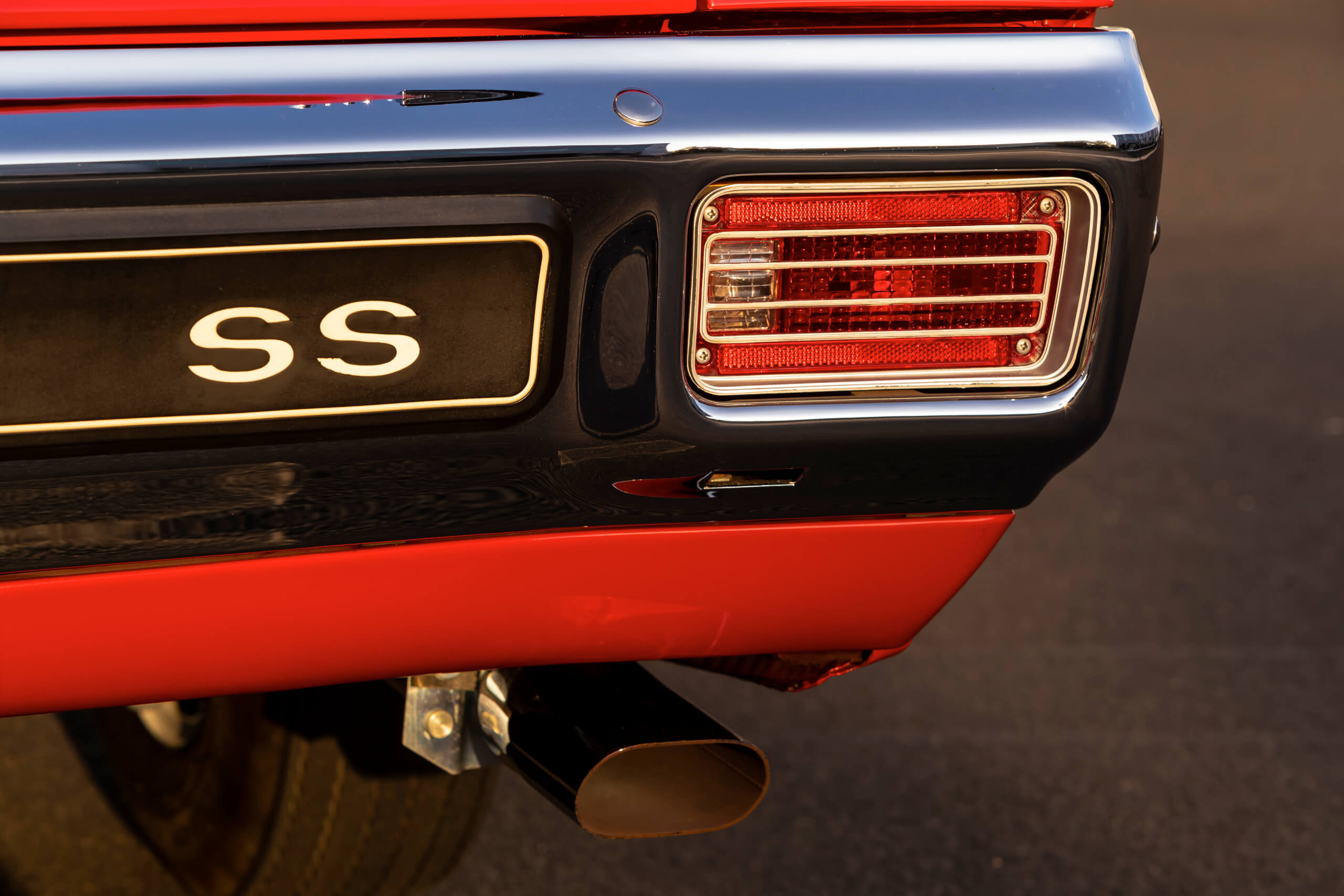 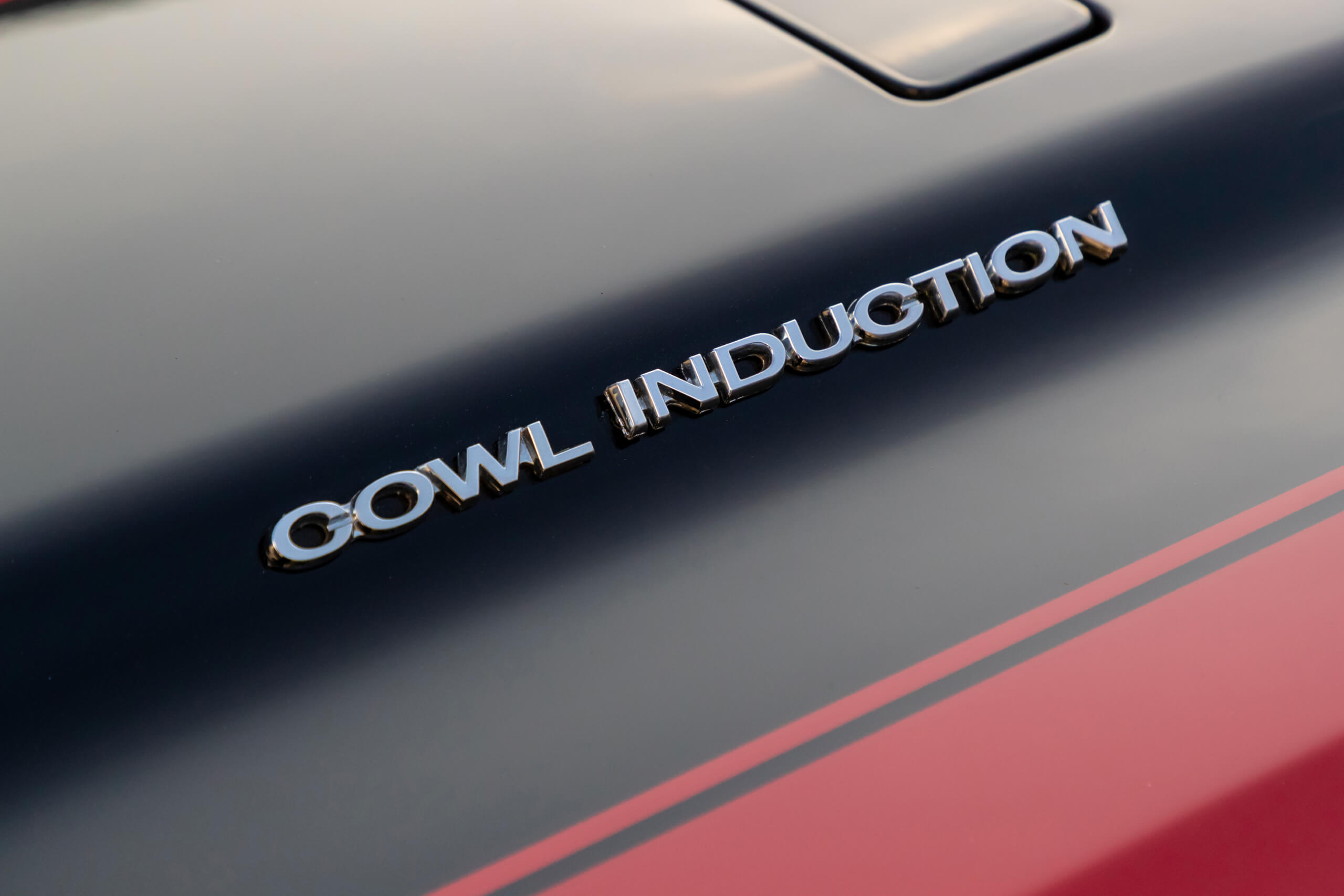 “The ride height wasn’t correct, for example. The glass wasn’t date-coded to coincide with the manufacturing date of the car. The plating was wrong on the trunk and hood latches. I didn’t have the correct carburetor. That sort of thing,” Salvo explained.

To make the car right, Salvo enlisted the help of Chris White of Concours Concepts in Upton, Massachusetts, recognized among the Chevrolet faithful as a guru when it comes to Chevelles. White flew to Los Angeles to inspect the car, alongside restorer Don Mertz. Mertz is a Mercedes-Benz expert located in Sun Valley, California, who works on the European cars in Salvo’s collection. “Don’s not a Chevelle expert,” Salvo pointed out, “but once he got direction from Chris, he did the work.”

That initial inspection took some eight hours and resulted in a lengthy to-do list for Salvo and Mertz. White not only showed them which parts were needed, he also educated them on how to recreate the proper finishes on the car, including on the little-seen undercarriage, to mimic the way it looked when it left the Baltimore assembly plant. Salvo undertook the parts hunt, finding date-code and NOS components whenever possible, that Mertz would then install. 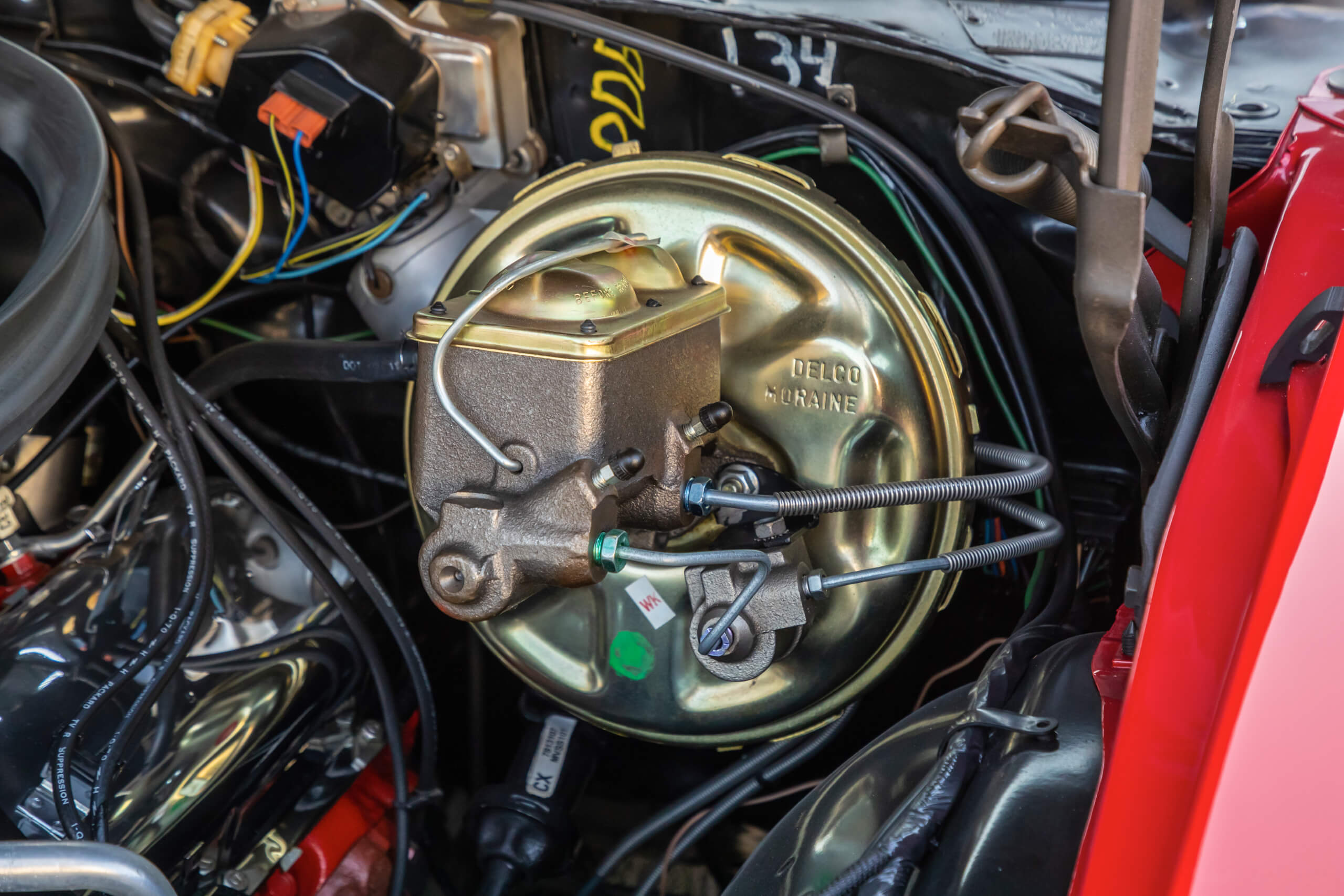 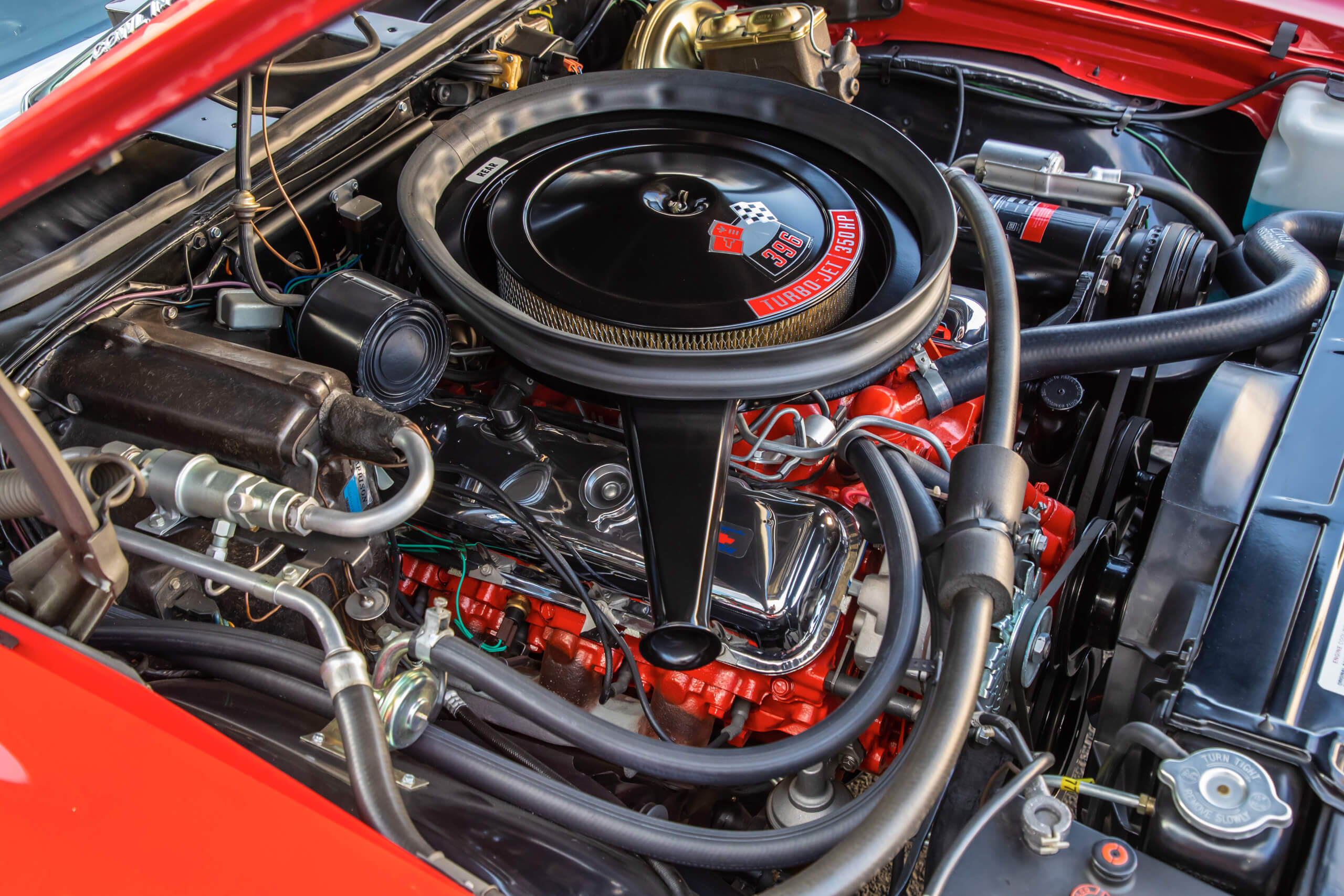 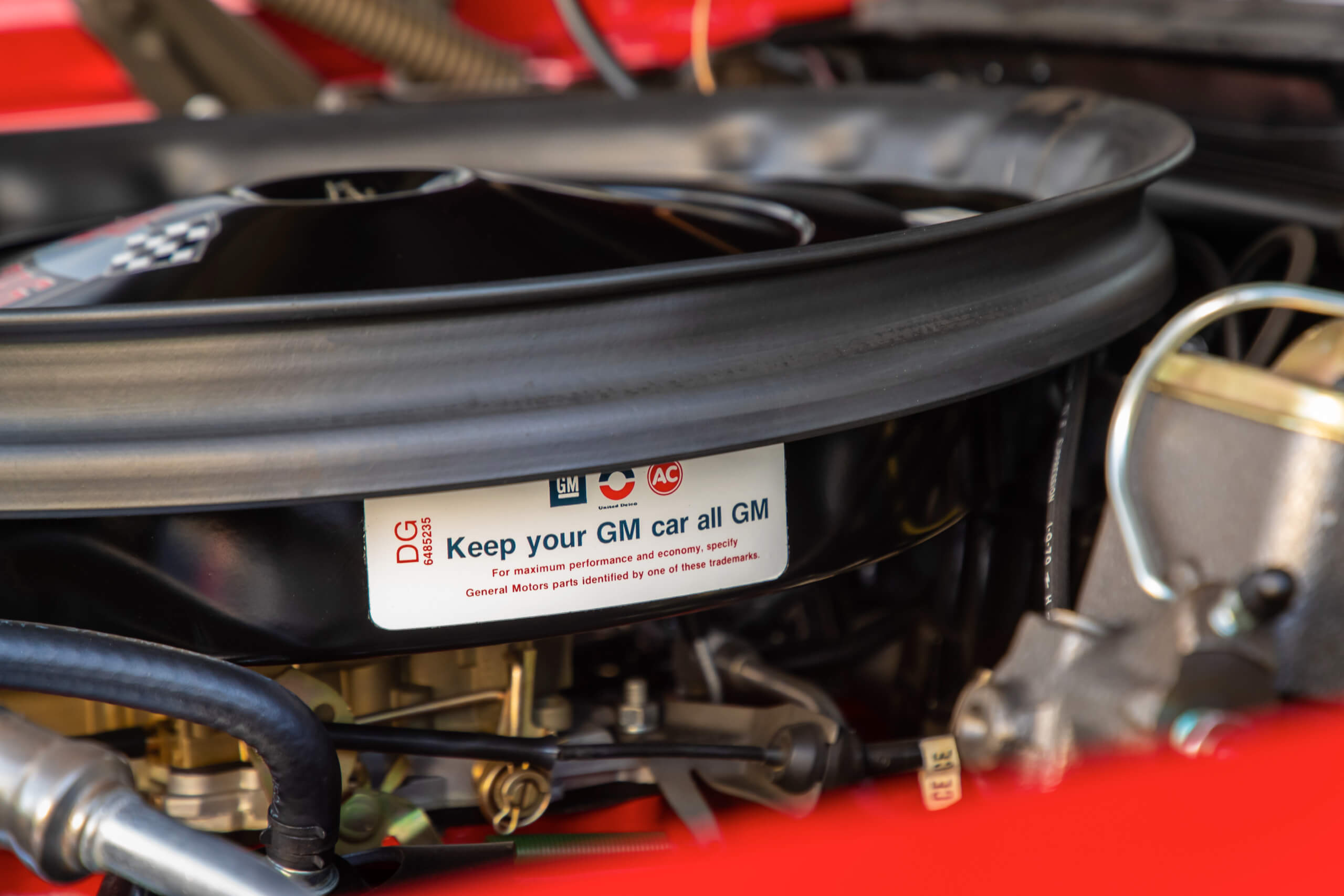 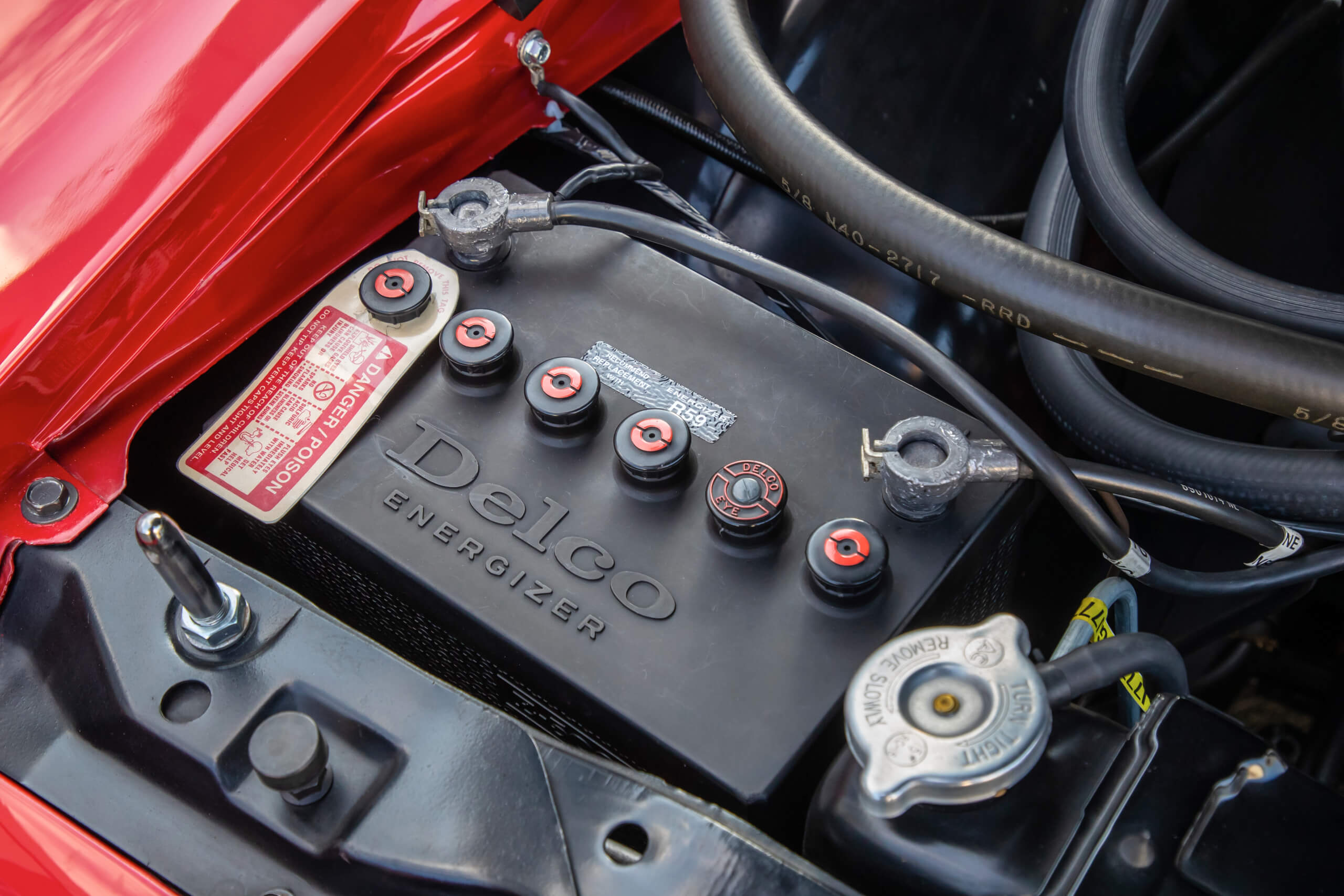 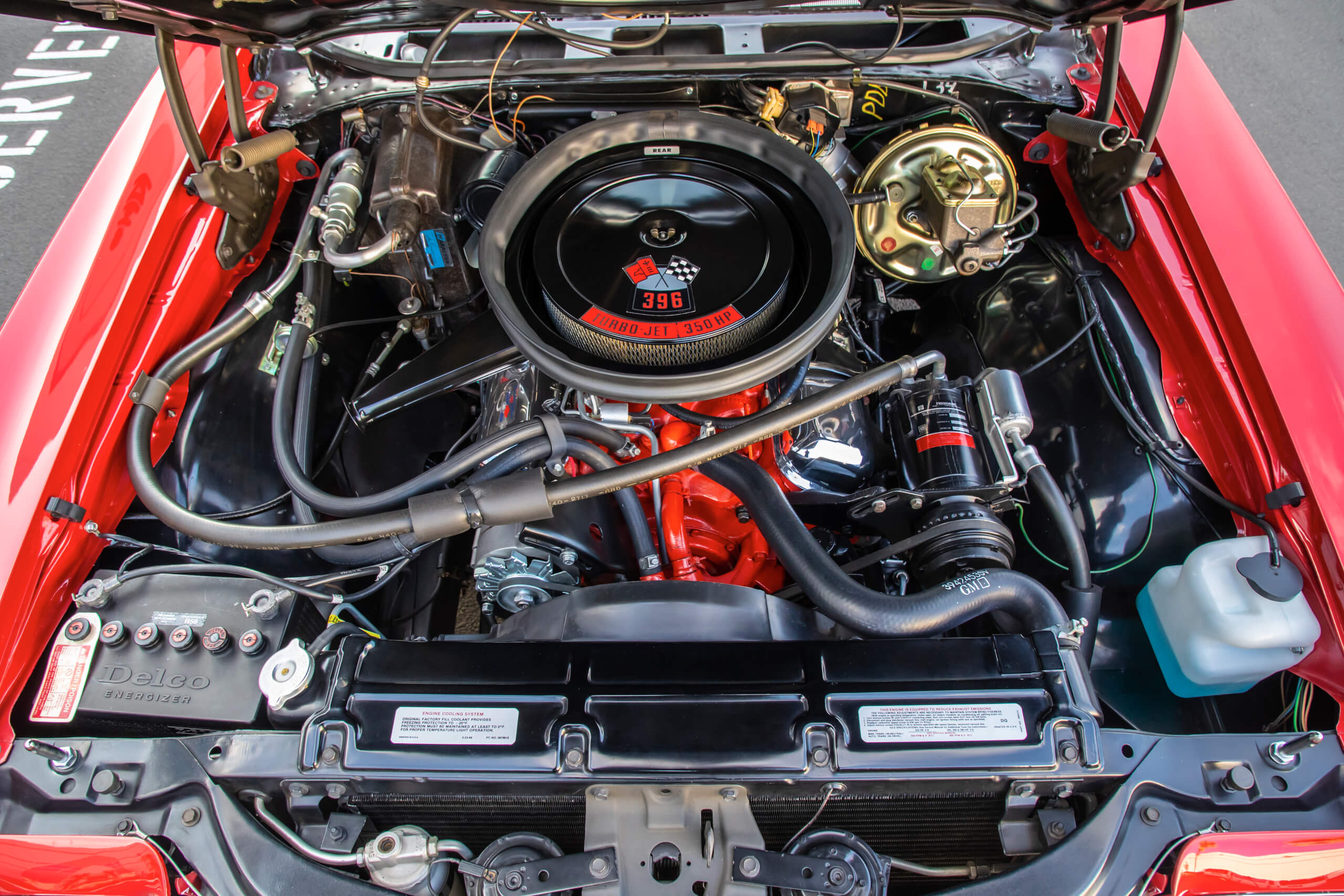 In 2015, Salvo took the Chevelle to the Muscle Car and Corvette Nationals (MCACN) in Chicago, recognized as the premier muscle car show in the country. MCACN judges are as tough as they come. The lengthy amount of time they spend inspecting each vehicle culminates in a six-page judging sheet with their results. The Chevelle won a Concours Gold award, scoring 964 out of 1,000 possible points.

“It was really cool,” Salvo remembered. “The MCACN judge looking at the underside of the car told me, ‘This is perfect. But I can’t give you a perfect score, so I’m deducting a point for dirt in your wheelwells.’ We spent a lot of time and effort under the Chevelle, spent six months replacing lines, doing overspray per Chris White’s recommendation, all things that nobody but a MCACN judge would focus on. It was worthwhile. It put the car over the top.”

In 2018, the Chevelle was one of 16 cars nominated by the AACA for its Zenith Award for best restoration out of the more than 3,000 cars judged over the course of the previous year. “I lost to a Packard with an 11,000-hour restoration,” Salvo recalled, “but it was pretty cool to be one of the 16 nominated.” 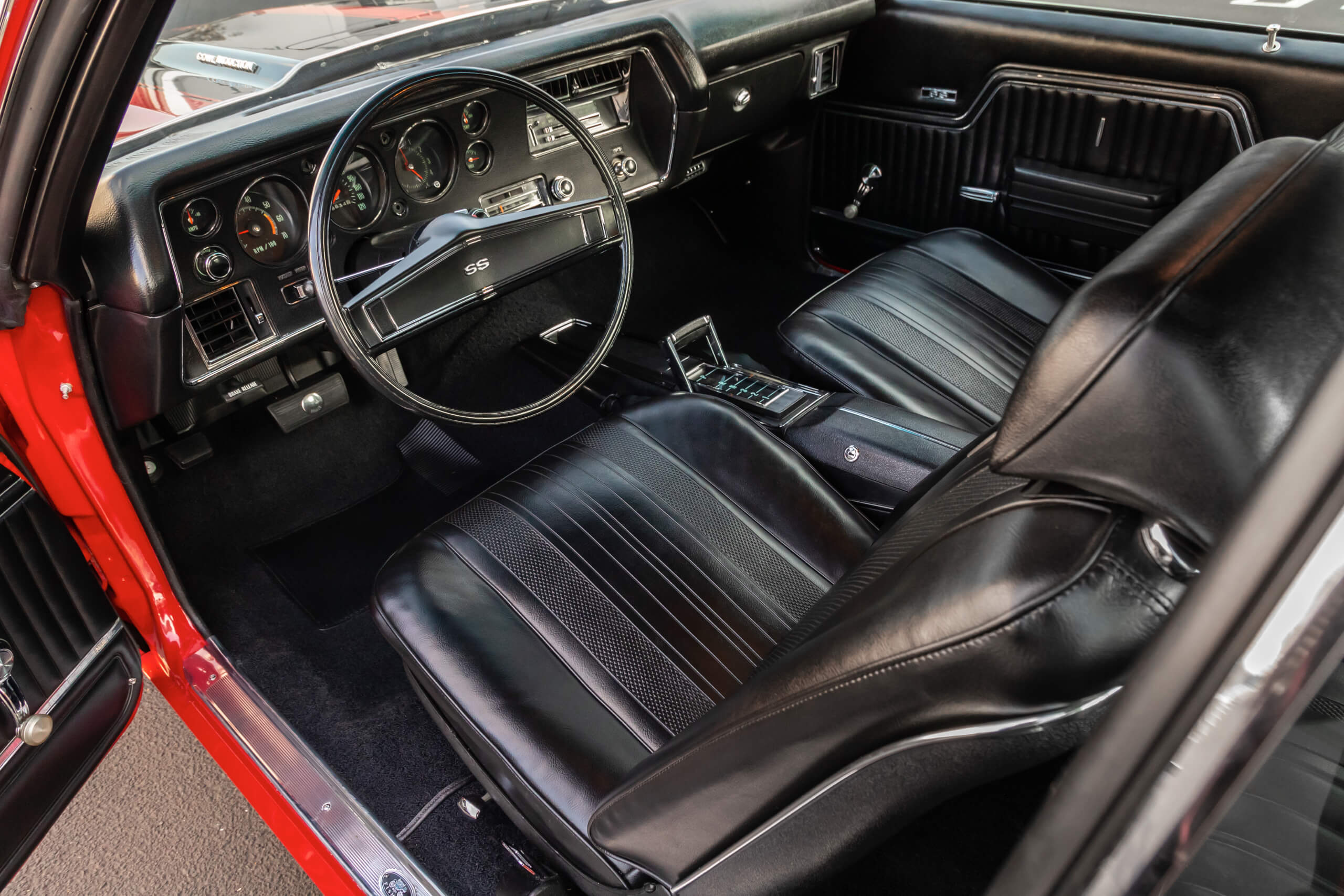 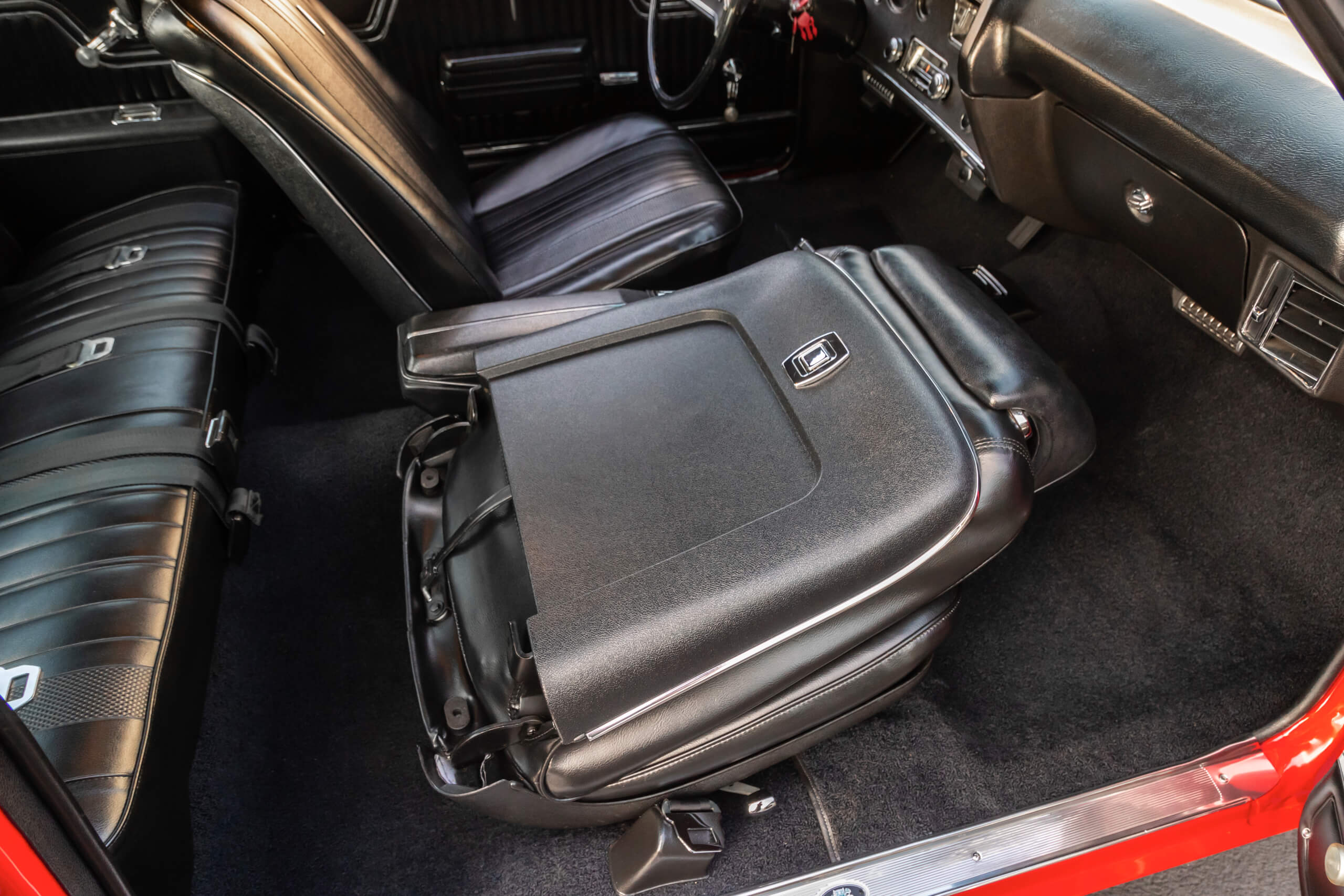 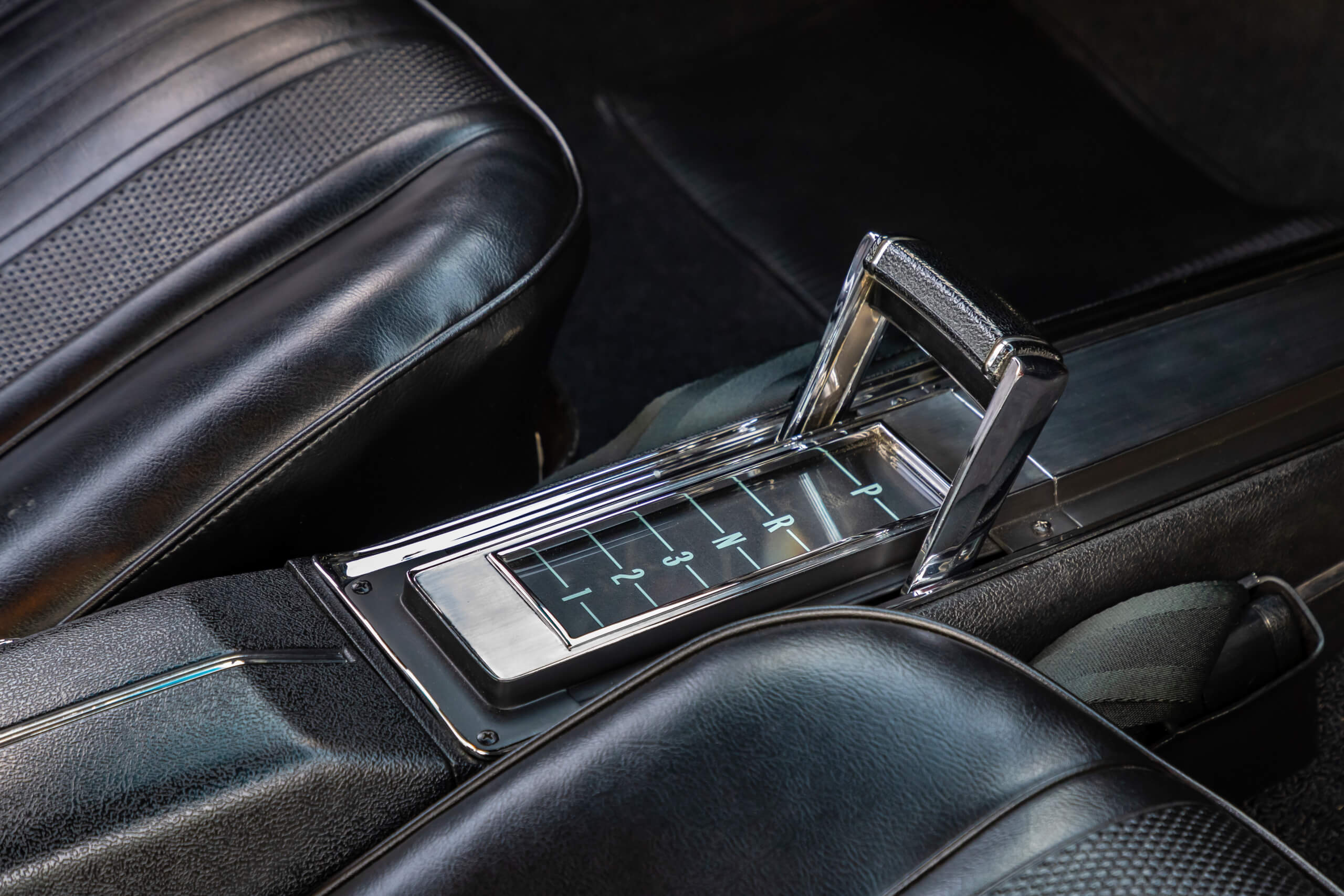 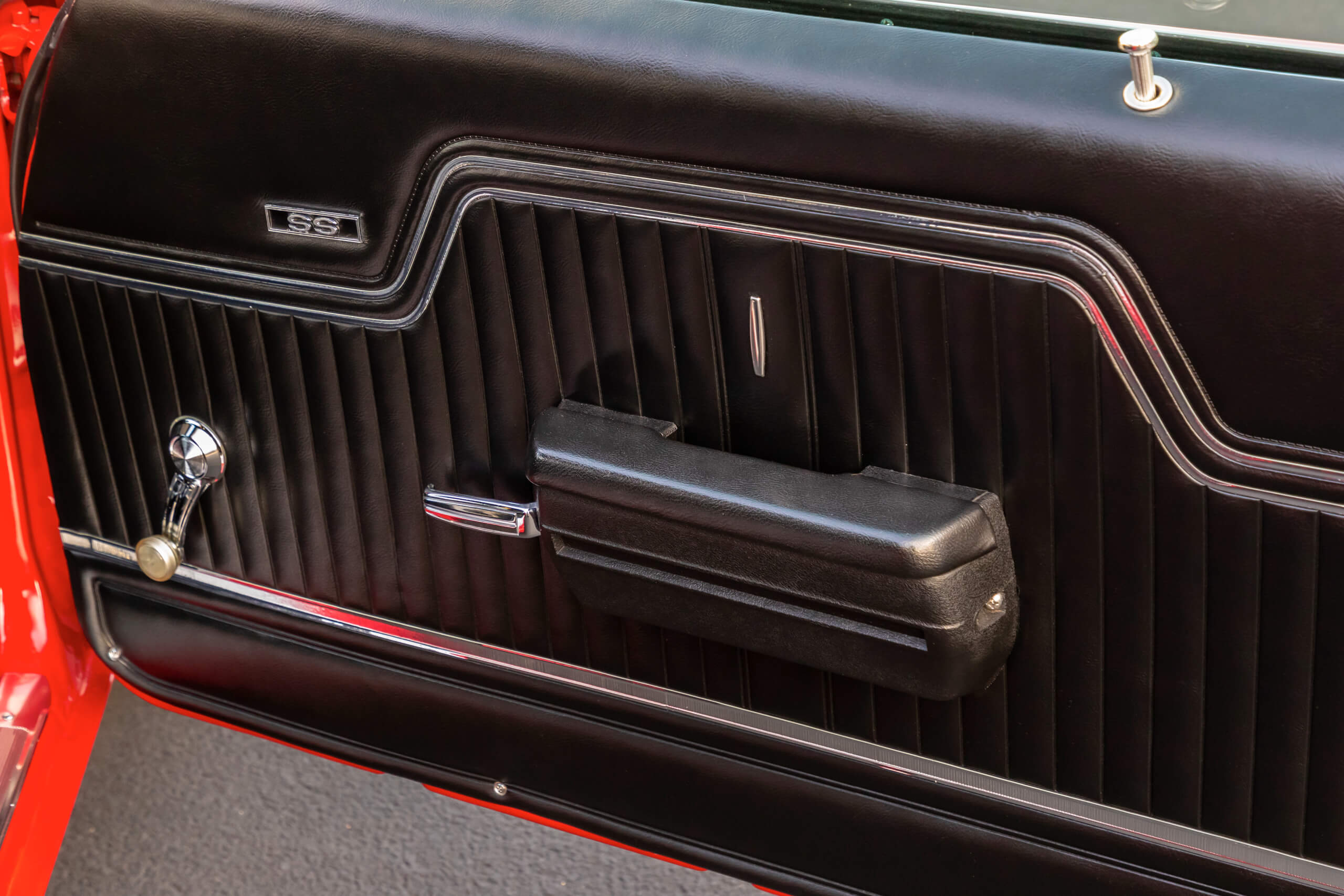 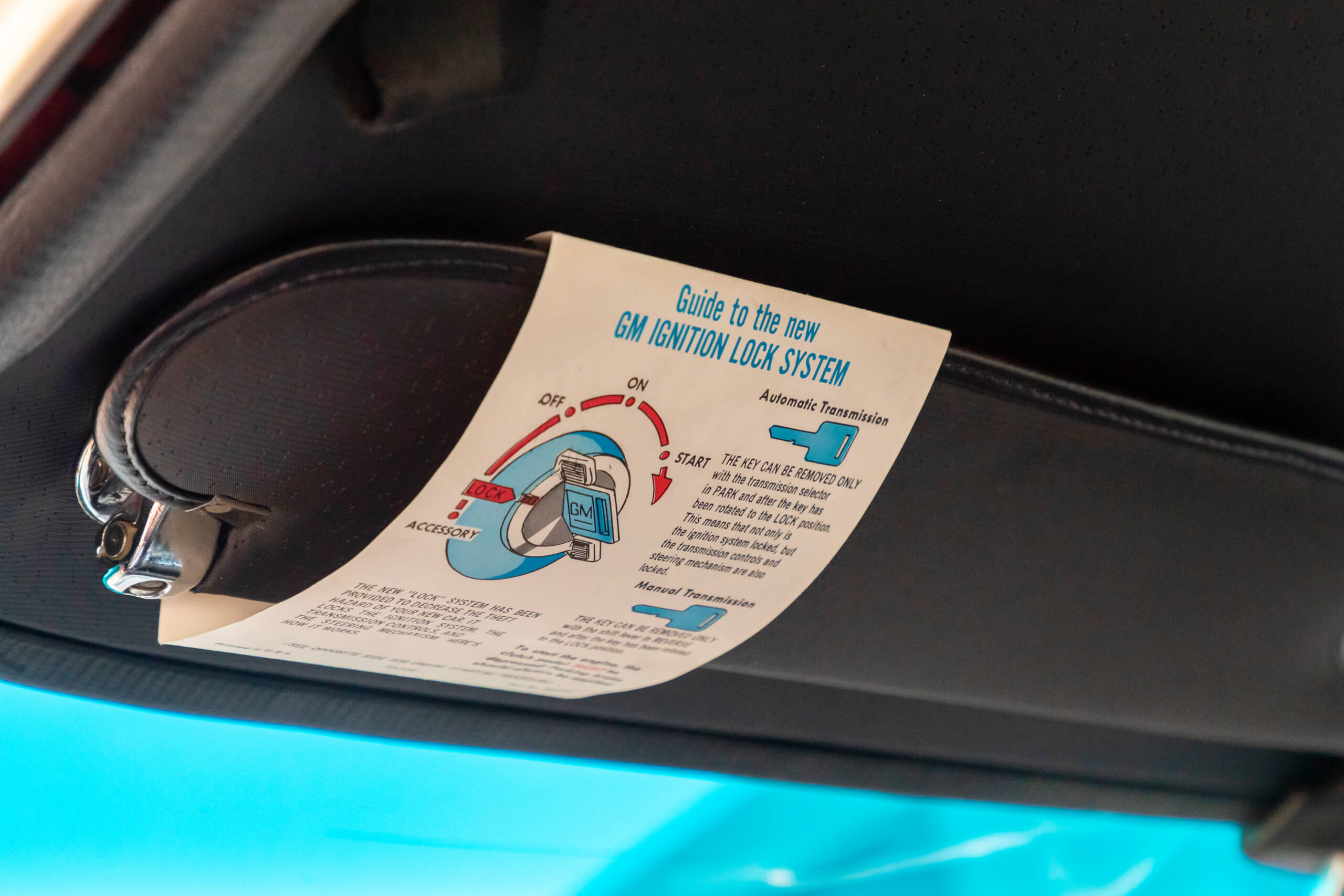 He’s not done, either. Salvo had White come back out last year “to fix every single thing that was marked off at MCACN,” Salvo said.  “He and I spent two days fine-tuning little things to make the car virtually perfect.” This year, MCACN celebrates the 50th anniversary of the 1970 model year, and Salvo’s Chevelle will be there in November, under the magnifying glass again.

“I like seeing it judged by good judges, and I fully expect it to score better this year,” said Salvo. “It’s not cheap to do, either. You have the entry fee, plus $3,500 to transport it there and back. You gotta be nuts if you don’t enjoy it.”

Still, given the level of effort and attention he lavished on the Chevelle, Salvo said that if he could have just one kind of car, “It would have to be a driver, first and foremost.”

“Showing and driving are so different,” he explained. “Honestly, I am a show guy. That’s what validates all the work. When you’re driving a car, people will look at it, but at the kinds of shows I go to, like MCACN, the people there and the judges want to see cars that are correct. That kind of appreciation is what makes all the hard work worthwhile.”

But, he admitted, “I don’t have the same kind of fun that I have driving the Dart or my 1971 Mercedes 280 SL. That’s why I have both types of cars. I do like to drive them. I like the sounds and the smells. There’s nothing that’s more fun than to drive the Dart, especially when it’s uncorked. You could park the Chevelle next to that Dart, and if you start the Hemi with the mufflers uncorked, everyone will crowd around the Dart.”

Rollcage side bars are pinned to ease entry and exit. Those are real lightweight A100 van seats.

Drive It or Show It? How One Car Collector Says ‘Yes’ to Both

Rollcage side bars are pinned to ease entry and exit. Those are real lightweight A100 van seats.

No detail too small: The horn wire clip, barely visible underhood, is 1970 vintage.

Salvo drives his Hemi Dart a lot—even in L.A. traffic!

Controller for the Gear Vendors over/underdrive are tucked under the dash. With the overdrive engaged, Dart is going 80 MPH at 2,500 RPM.

Salvo has spent years making his 1970 Chevelle SS396 as accurate as possible, using nothing but original, date-code-correct and NOS parts.

The Firestone bias-ply tires are Coker reproductions, but the valve stem caps are real 1970 pieces.

Interior is a mixture of original and date-correct parts.

The L34 350 HP big-block is original to the car, as is its TH400 automatic transmission and 12-bolt rearend.

Joe Salvo is a life-long car guy with a collection that includes drivers and show cars.