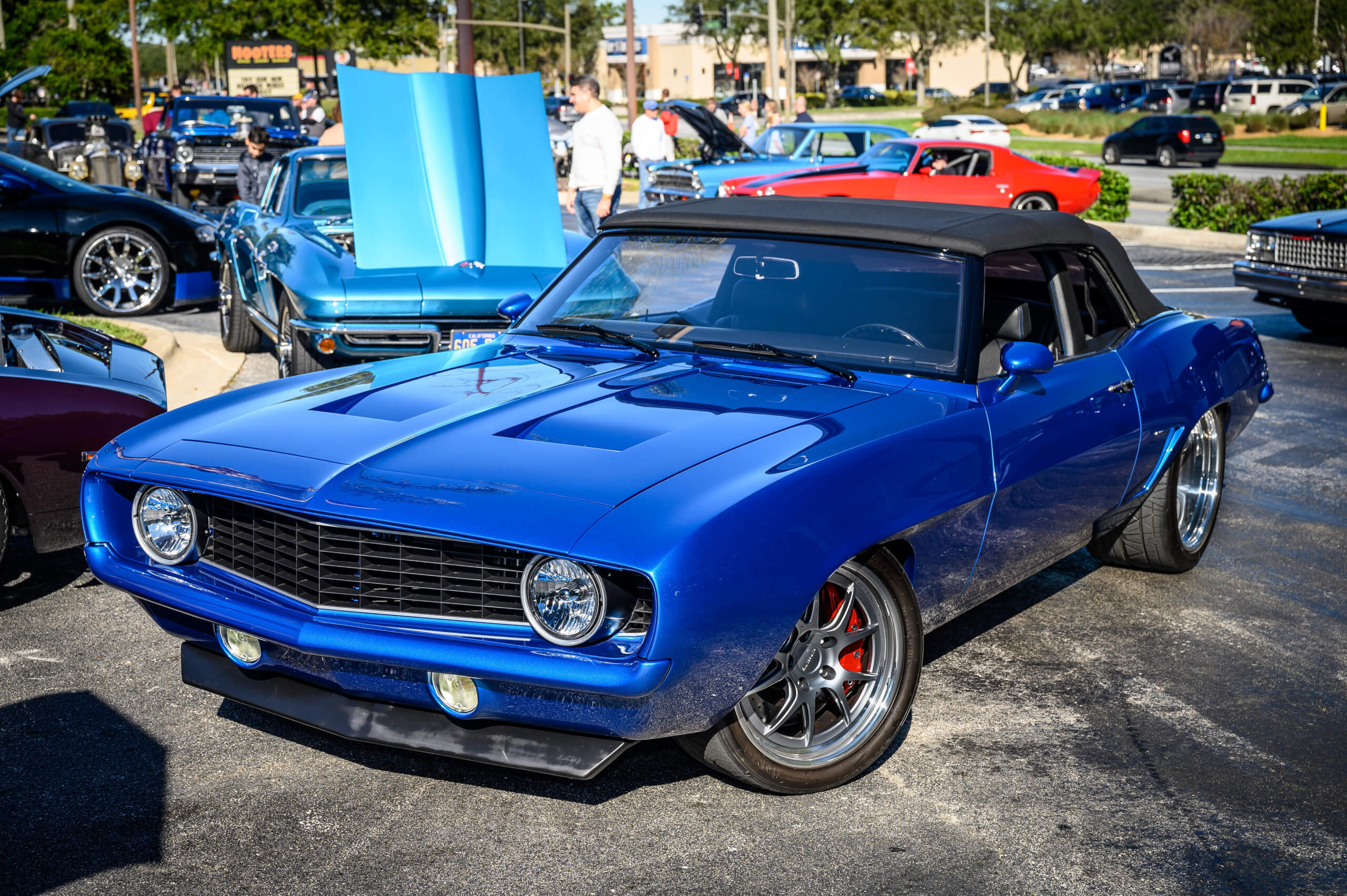 Back in the spring of 1976, Brad Grant wasn’t needing another set of wheels. The college junior was quite happy with the gray 1970 Camaro SS he was cruising around in but that didn’t keep him from looking at other options.

While visiting his folks back home in Pennsylvania, the Michigan State University student swung by a local car auction. One of the vehicles crossing the block that caught his eye was a convertible 1969 Camaro SS. When interest fizzled Brad nabbed it for $500. “It was such a cheap buy,’ laughs Brad, who now lives in Orlando, Florida. “I had no intention to do anything with it but couldn’t pass it up.”

The drop top had been sold new in the Keystone State and was looking for some much needed love. “At that time, the first-gen Camaros weren’t all that attractive to most,’ explains the enthusiast. Still, something about it grabbed Brad’s eye and he happily drove the Chevy home.

Unsure of its exact future plans and needing to focus on his studies, the Bowtie classic primarily sat in either a local warehouse or his parent’s garage. They ended up using it for the most part, enjoying regular outings. “They would go to their country club on nice weekends and always with the top down,’ said Brad.

In 2013 a fellow gearhead offered to freshen up the motor, adding larger cylinder heads to its 307ci V8 and upping the two-barrel carb to a four-barrel setup.

Finally, in 2016 a milestone birthday motivated Brad to get serious about crafting the ultimate dream machine. He headed to the nearby Daytona Turkey Rod Run, in Daytona, Florida, for inspiration. Bumping into Ed Nash, owner of Chassis Crafters in Daytona, Brad struck up a conversation leading him to feel Ed and his team were just the right crew for the complete overhaul. Work got underway in January of 2016 and was completed in the fall of 2019.

Under the hood in the super clean engine bay is an LS3 V8 bored to 525 cubic inches. Other slick touches include Ringbrothers hood hinges and relocated engine coil packs. Other performance upgrades include Corvette Z06 brakes, tucked away behind Forgeline wheels. 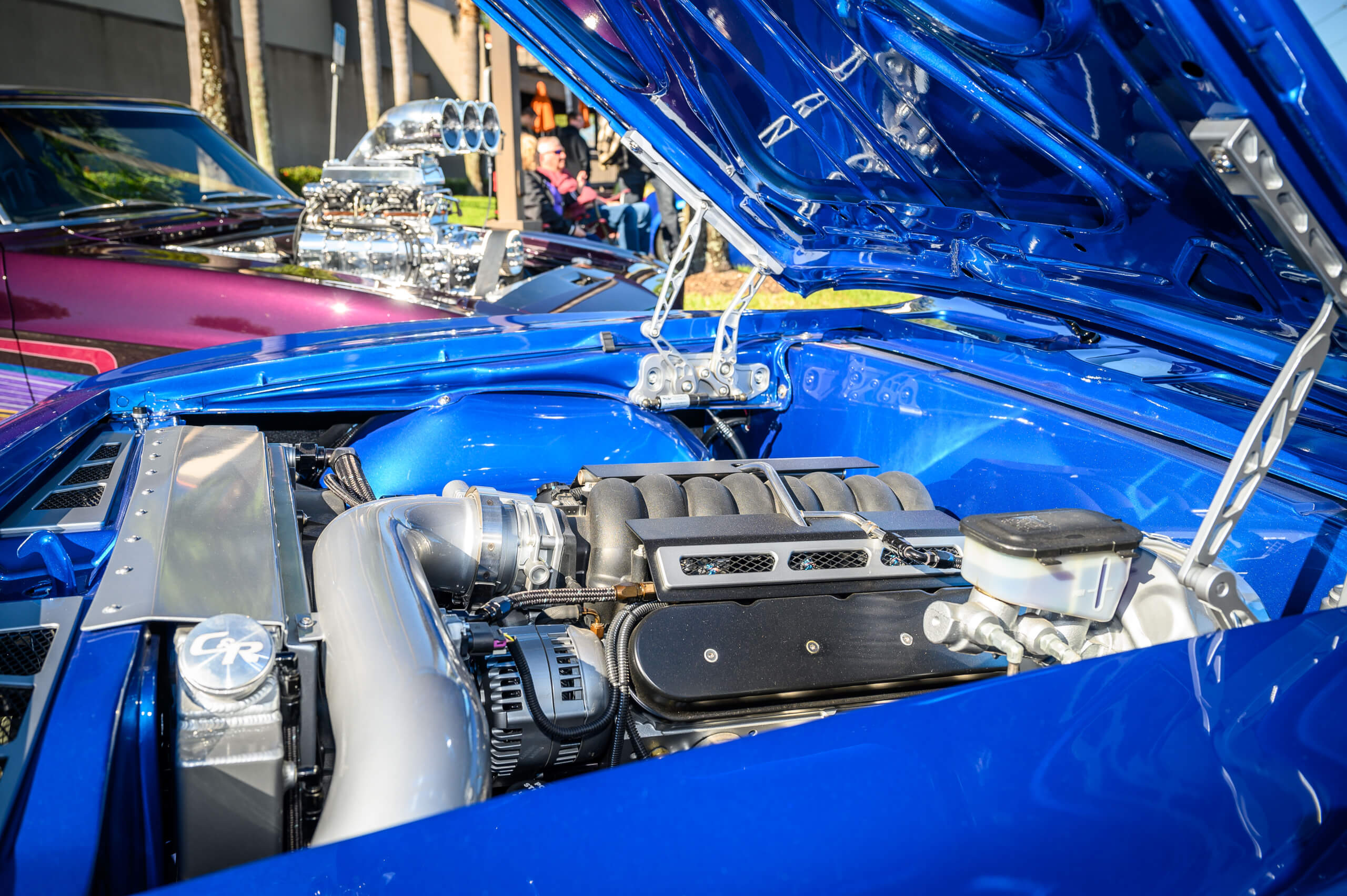 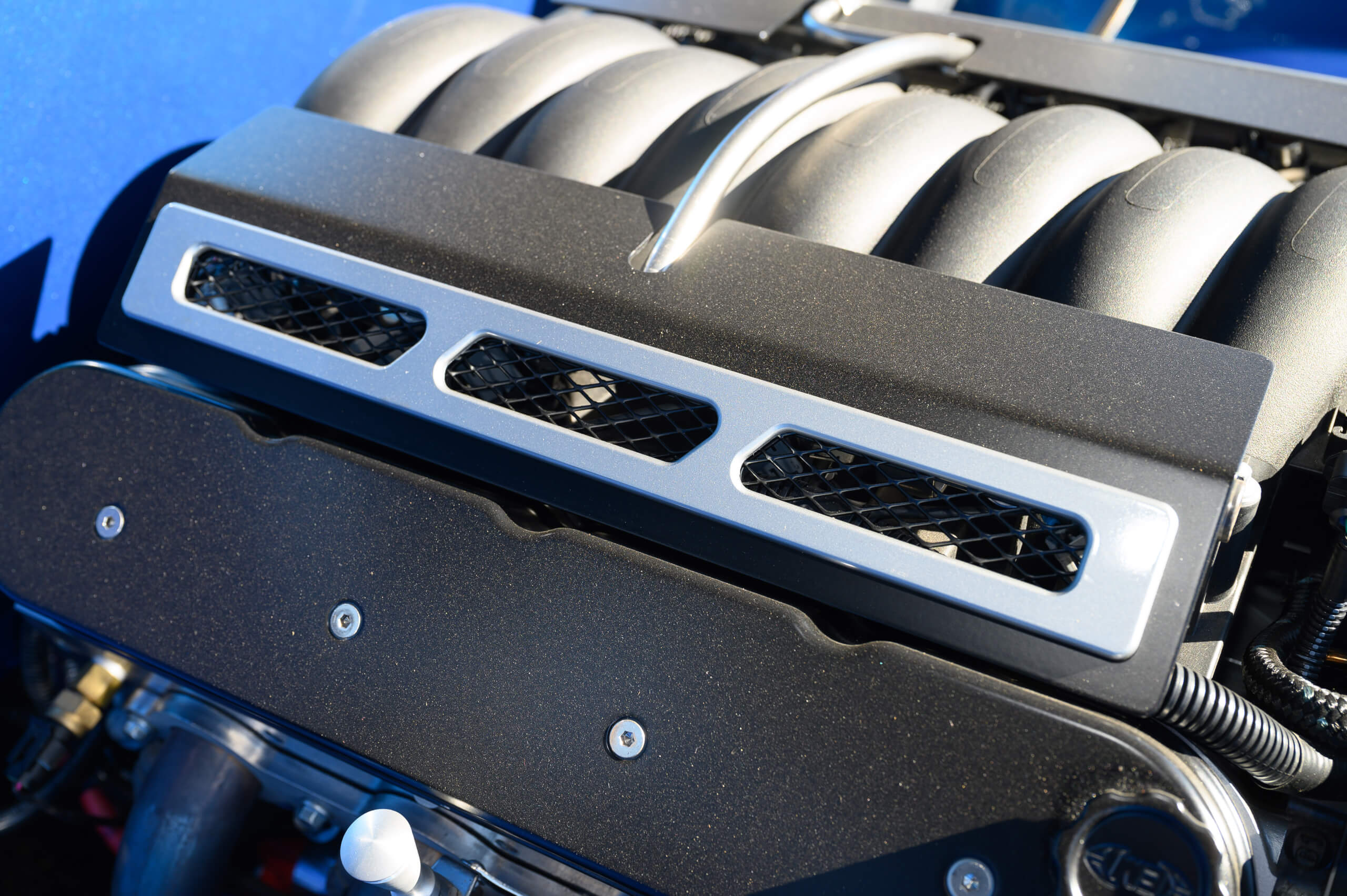 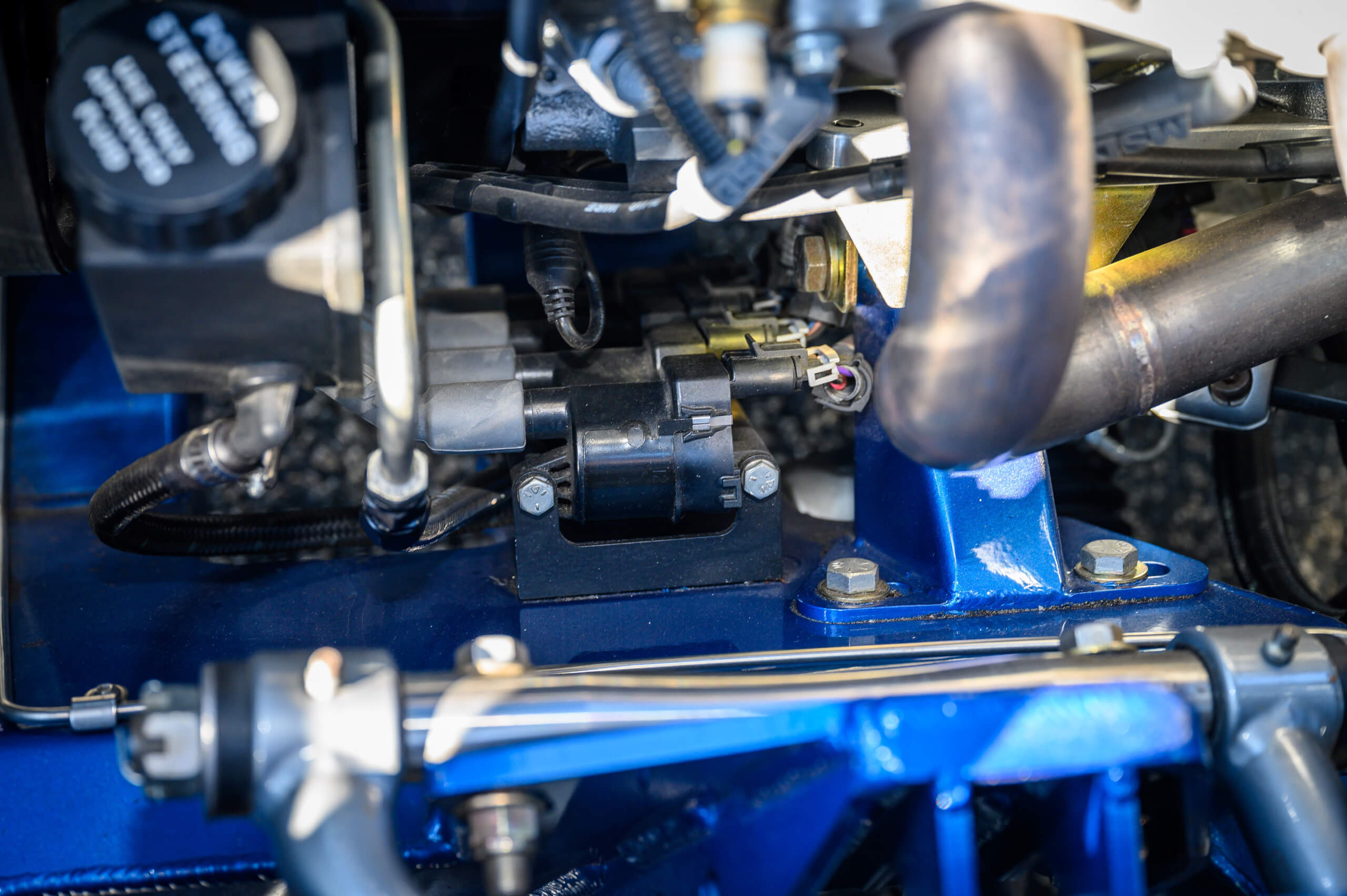 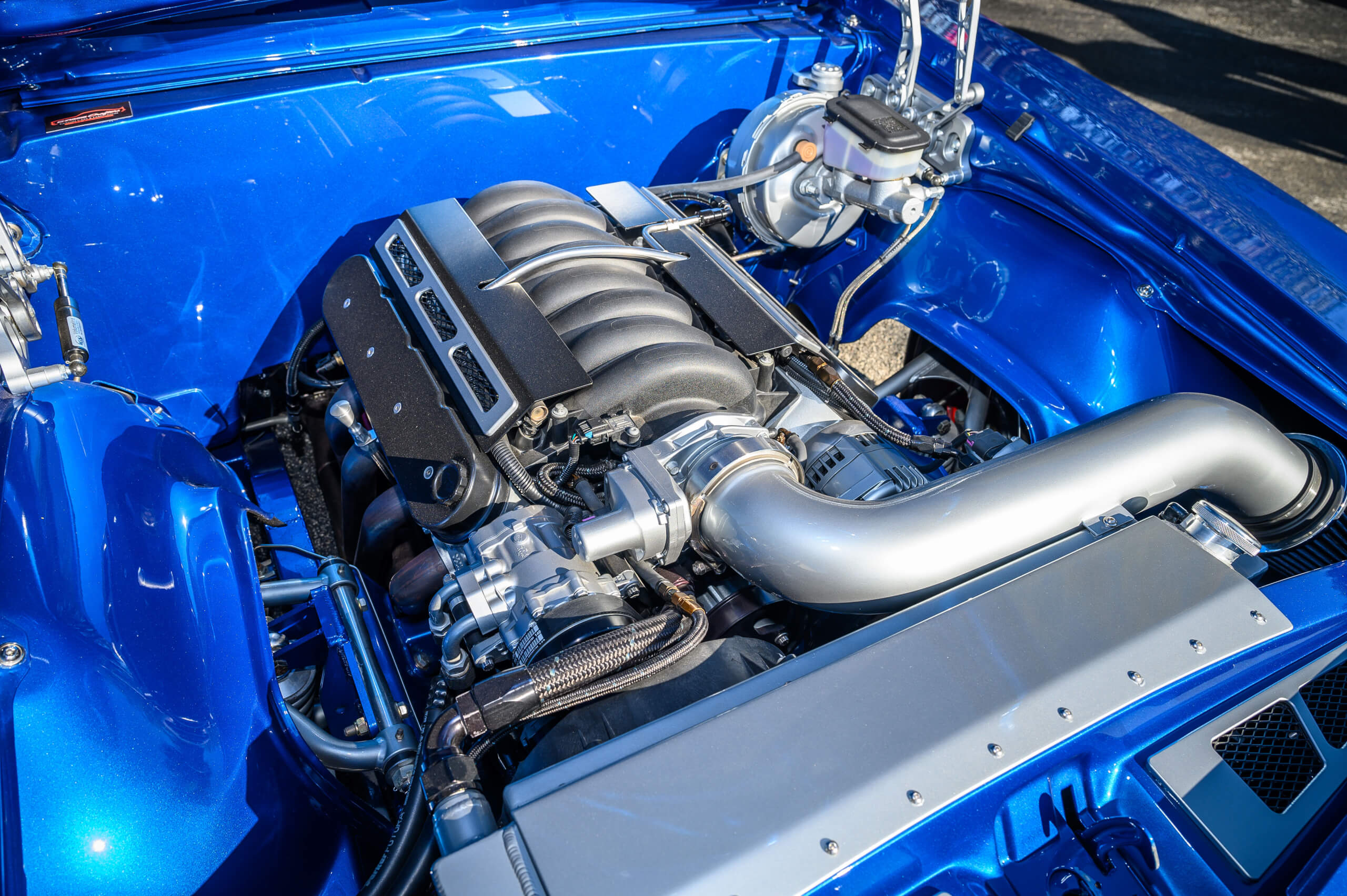 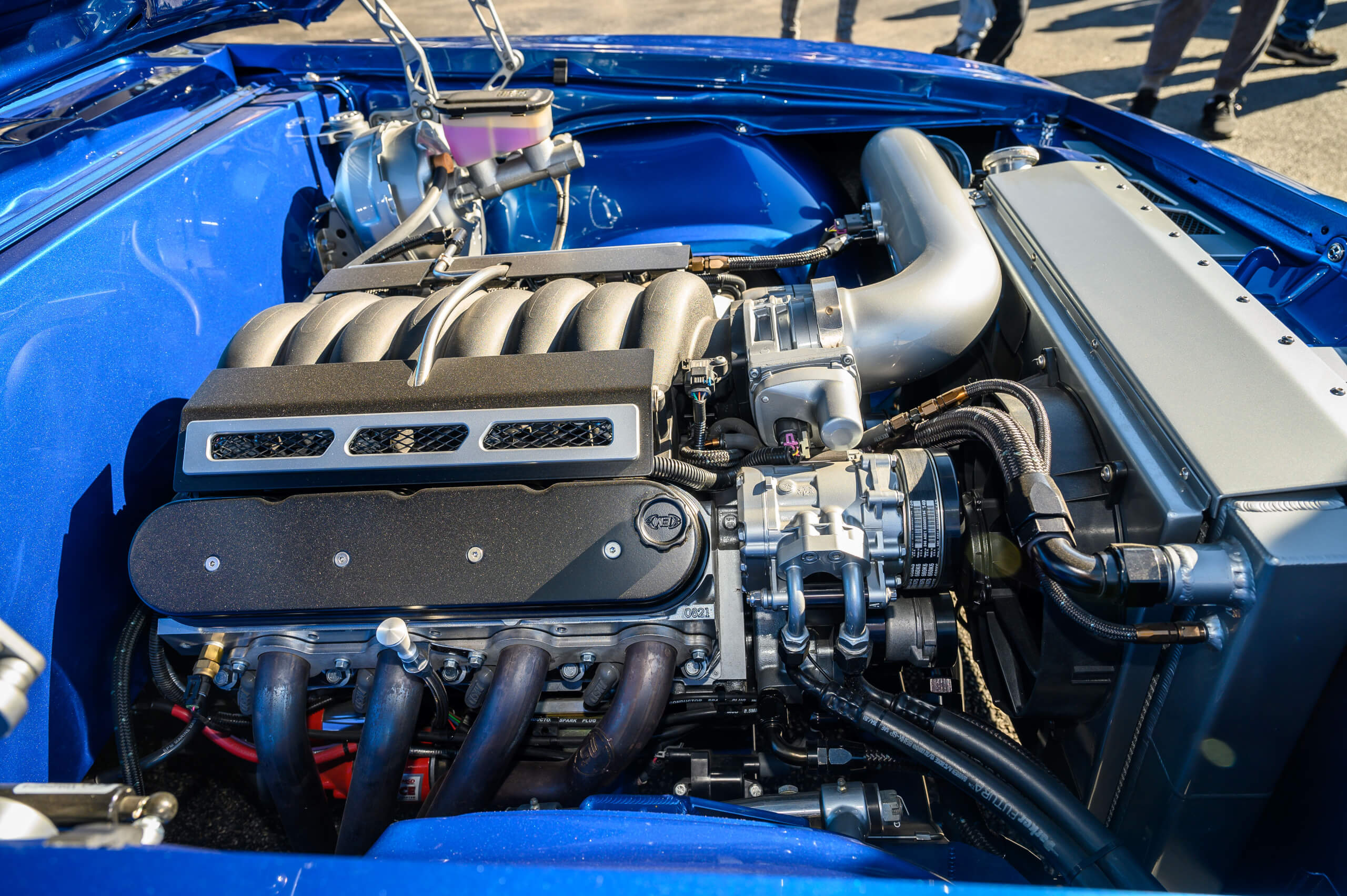 Besides the modern powertrain, the vehicle features loads of custom bodywork, including changes to amend a few factory aspects Brad didn’t like. “I never cared for the side ‘gills’ on the rear quarter panels so we had them cut in,’ laughs Brad. “Everyone looks at the rear of the car and think the rear fenders have been widened but they haven’t.”

Another item addressed is relocating the filler gas cap from behind the license plate and moving it to the center of the rear panel, matching what you’d find on a 1967 or 1968 Camaro.

Other subtle touches include smoothing the firewall, shaving all the exterior trim and badges and cutting and notching both front and rear bumpers to fit in flush. The hood also received custom work, having twin scallops added, complete with functional vents and billet aluminum grilles. A custom rear decklid spoiler was also hand-formed, too.

Once the bodywork was complete, the car was painted in Laguna Blue, a late-model Corvette color. Other items that normally would be chrome, like the windshield frame, were painted black. 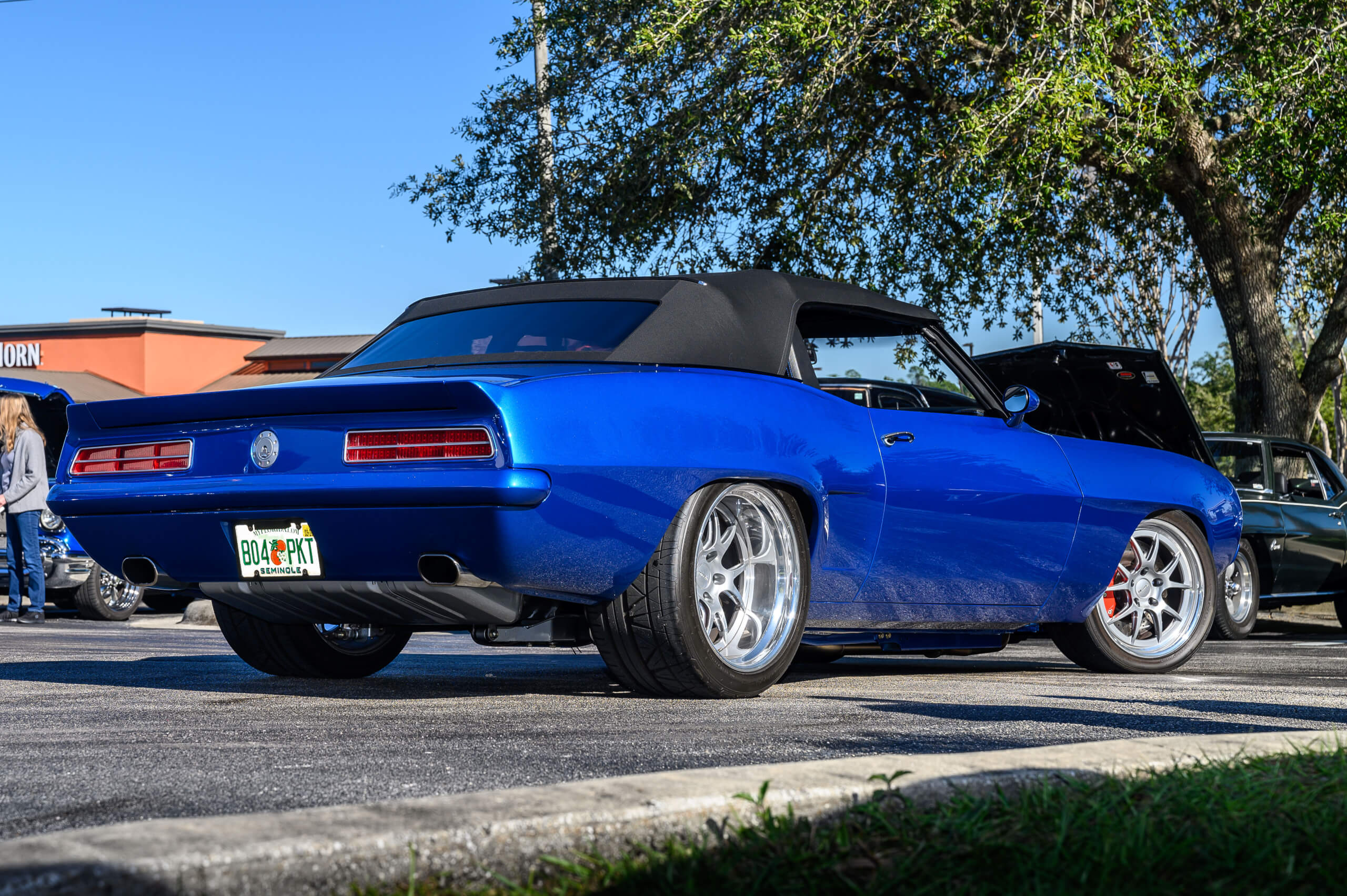 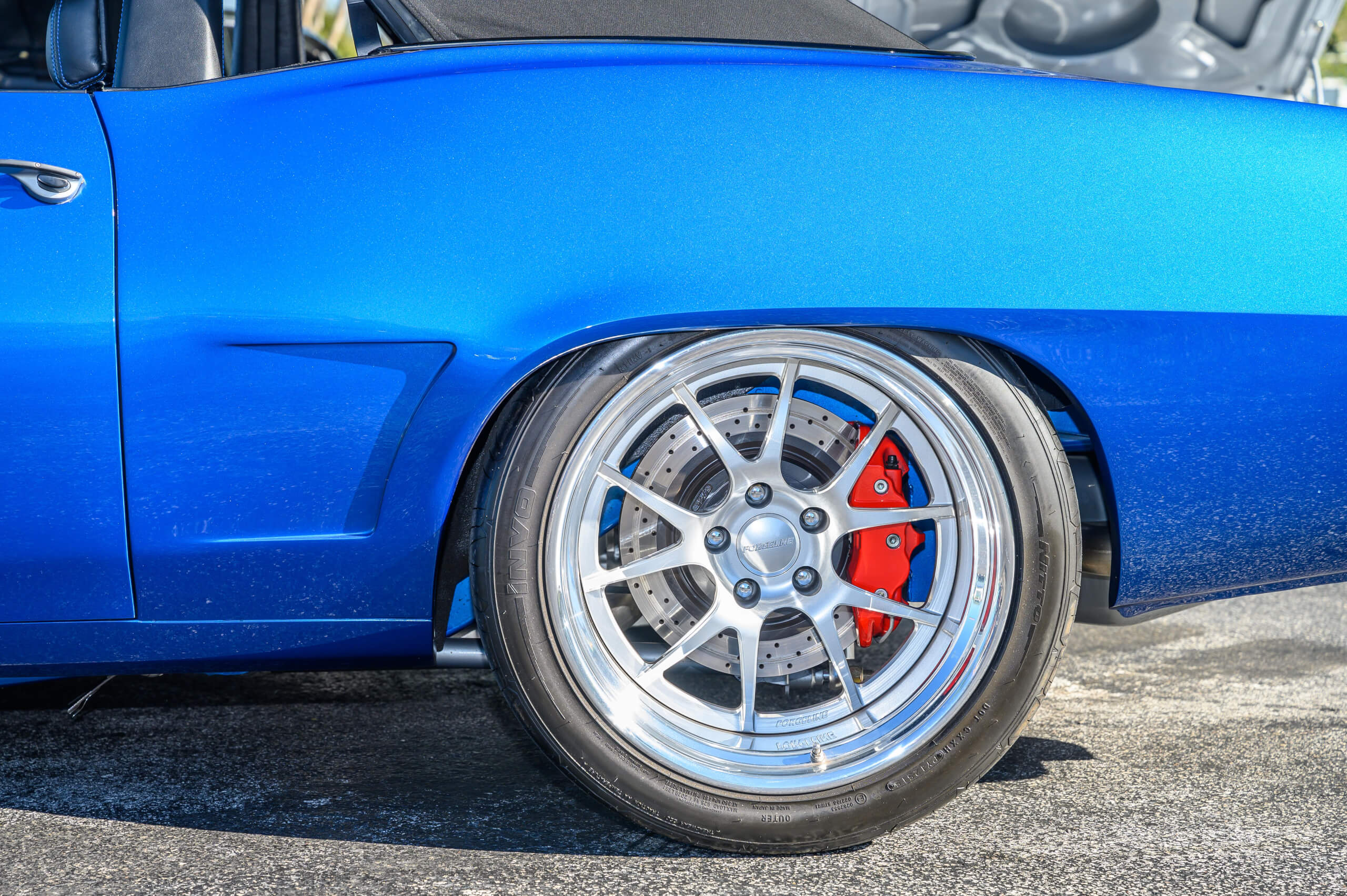 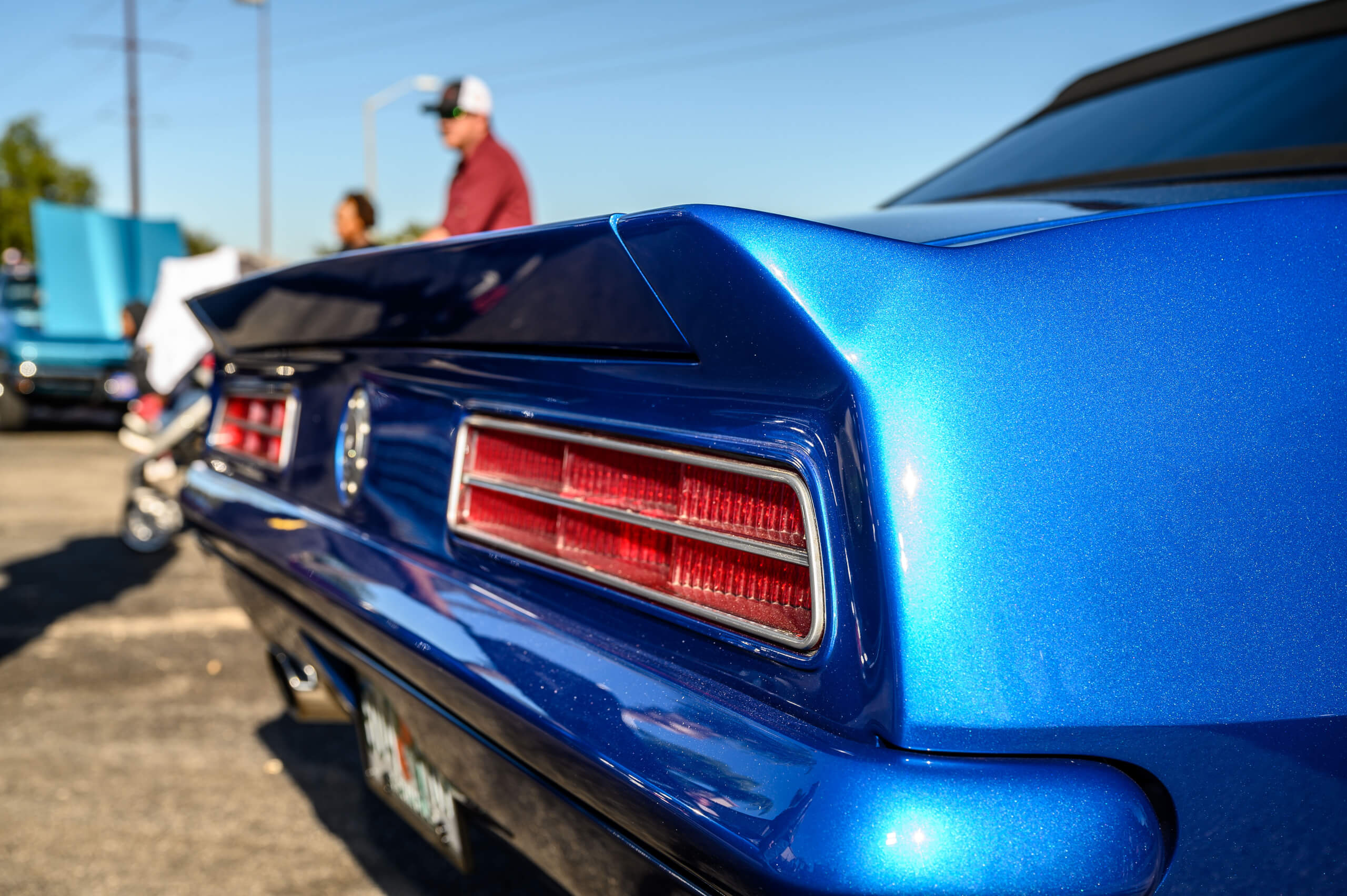 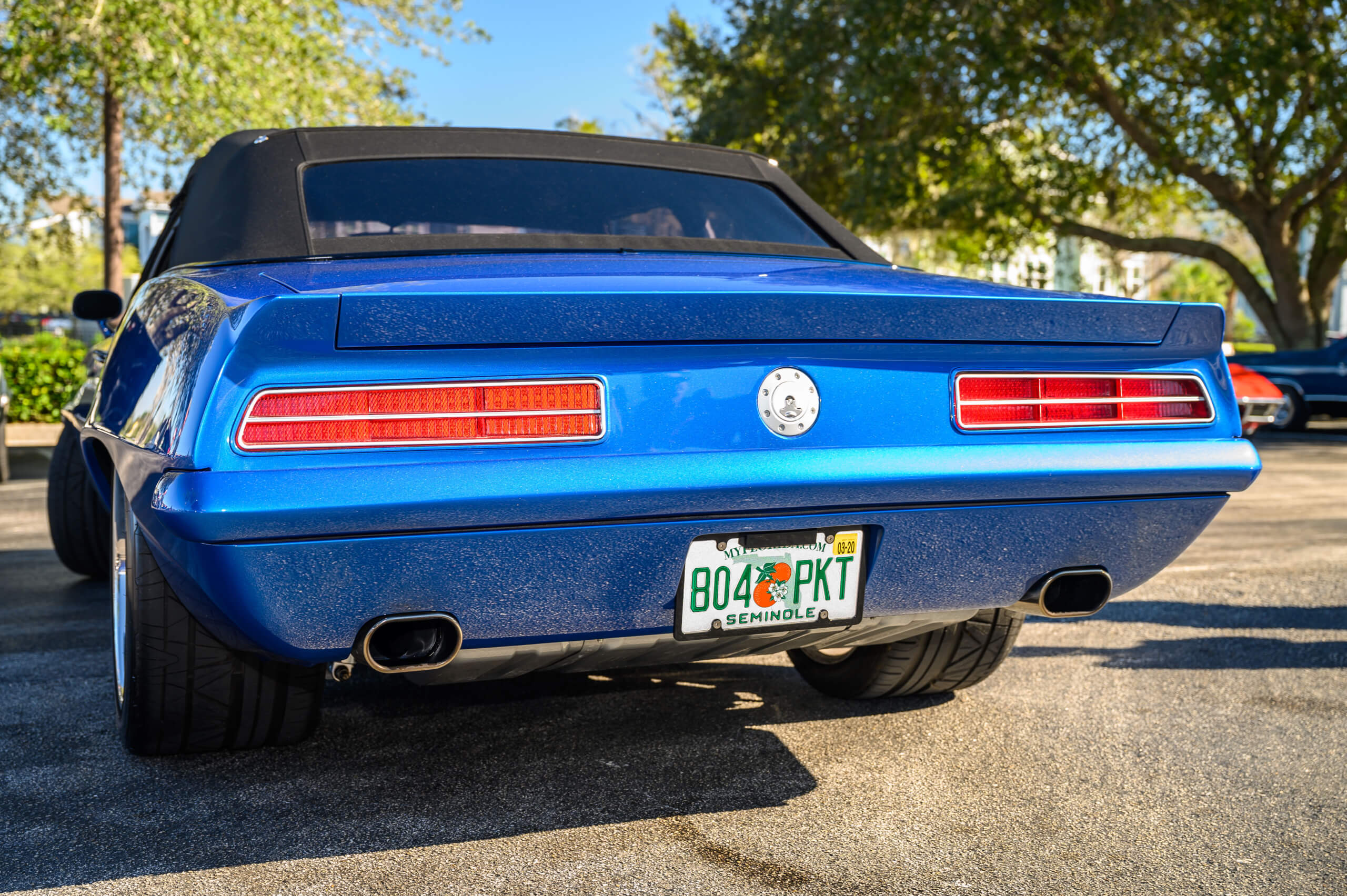 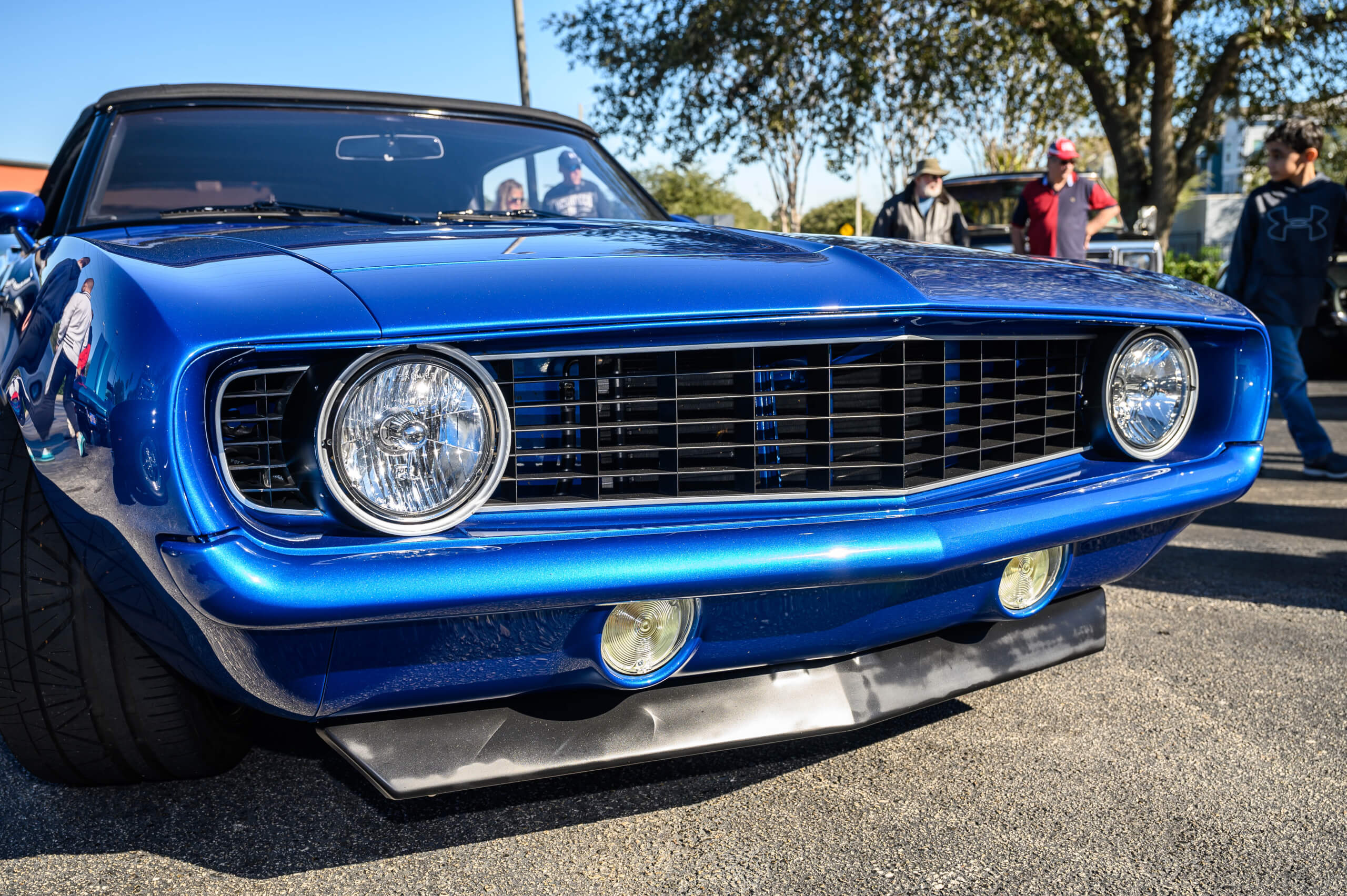 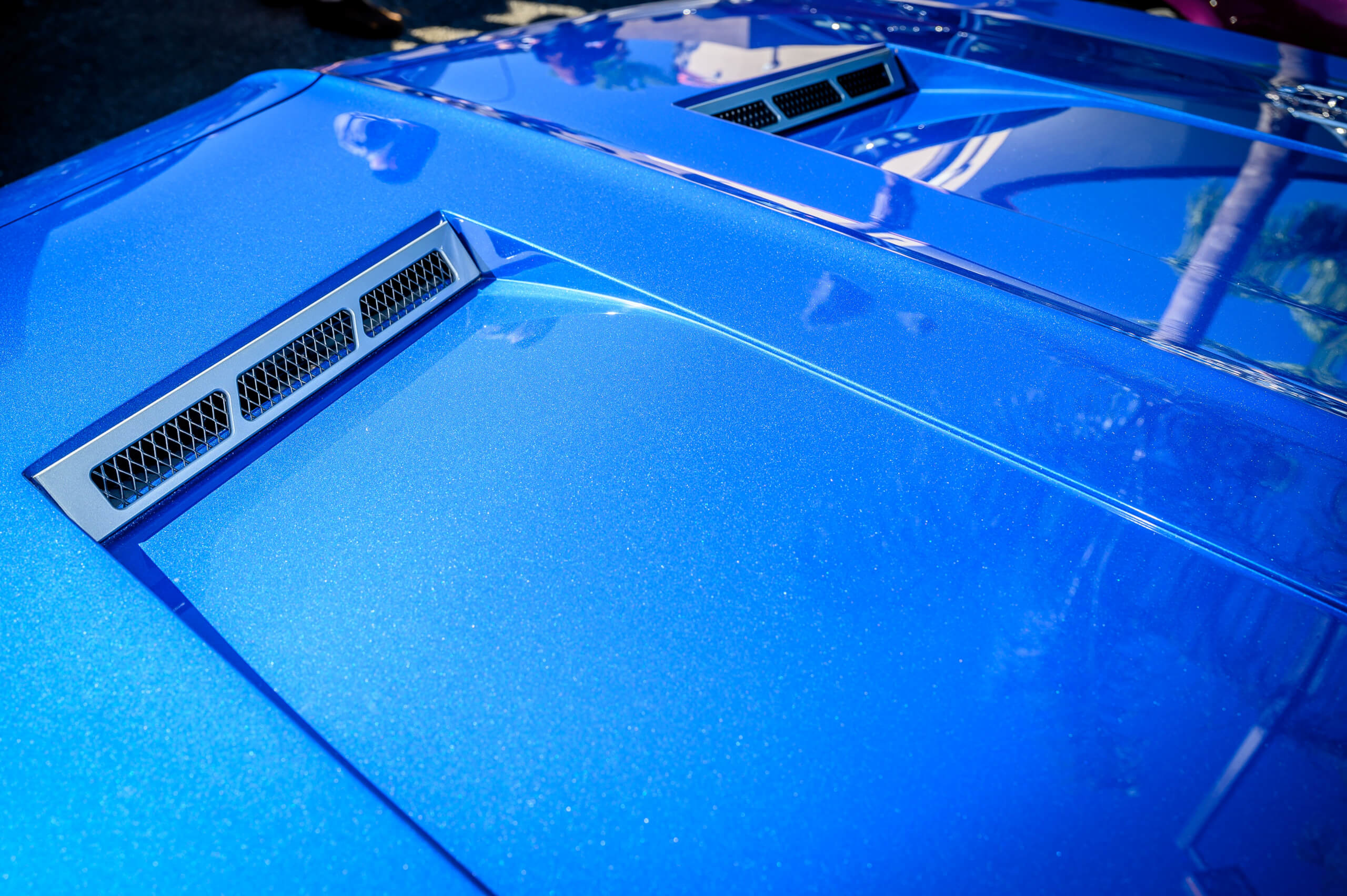 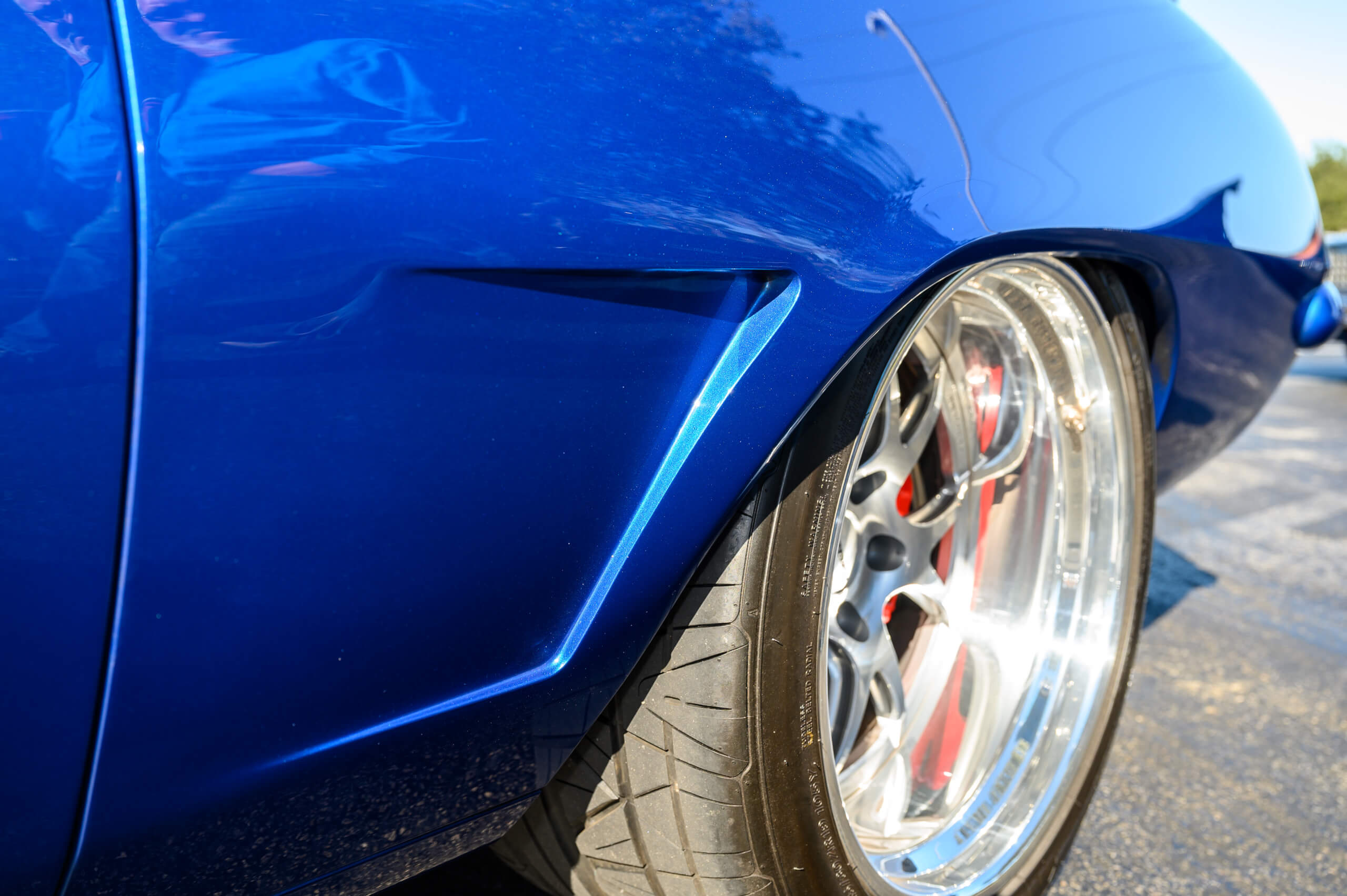 Inside, the original seats were refoamed, covered in black leather and given blue stitching to accent the exterior color. Other custom changes include a new sculpted dash and Dakota digital gauges. A modern sound system head unit was also installed between the front seats and race harnesses keep occupants in place during spirited jaunts. 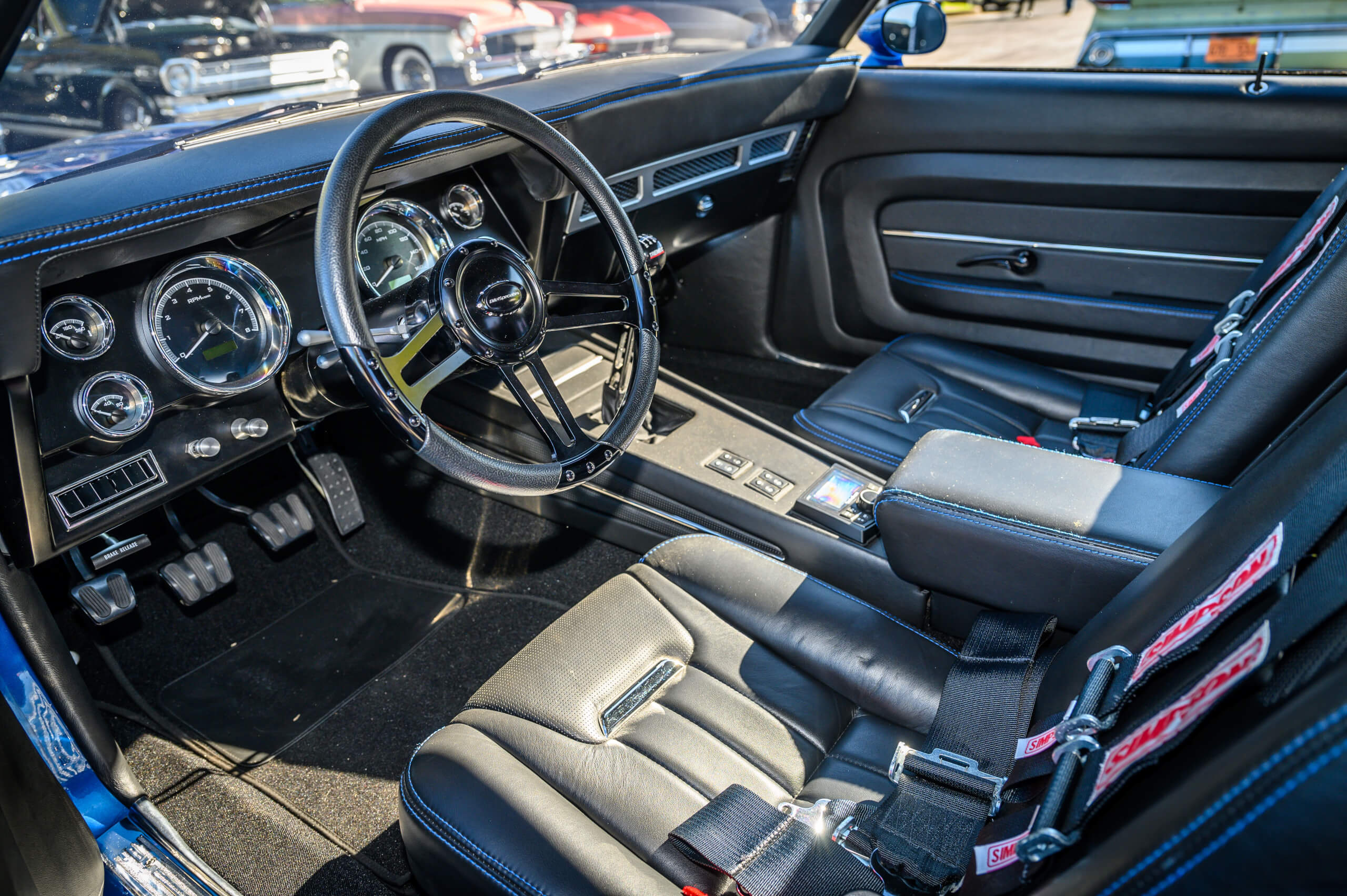 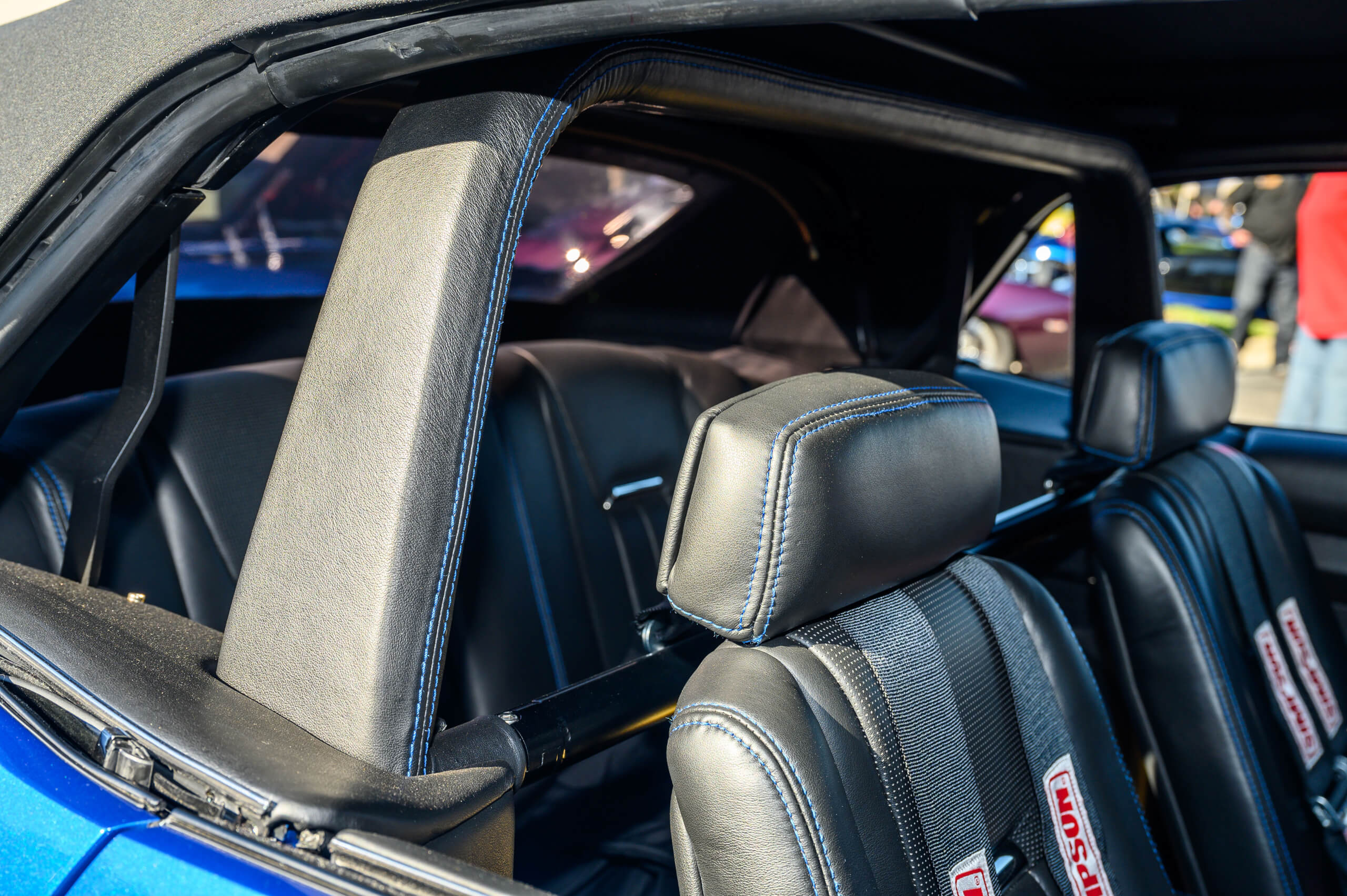 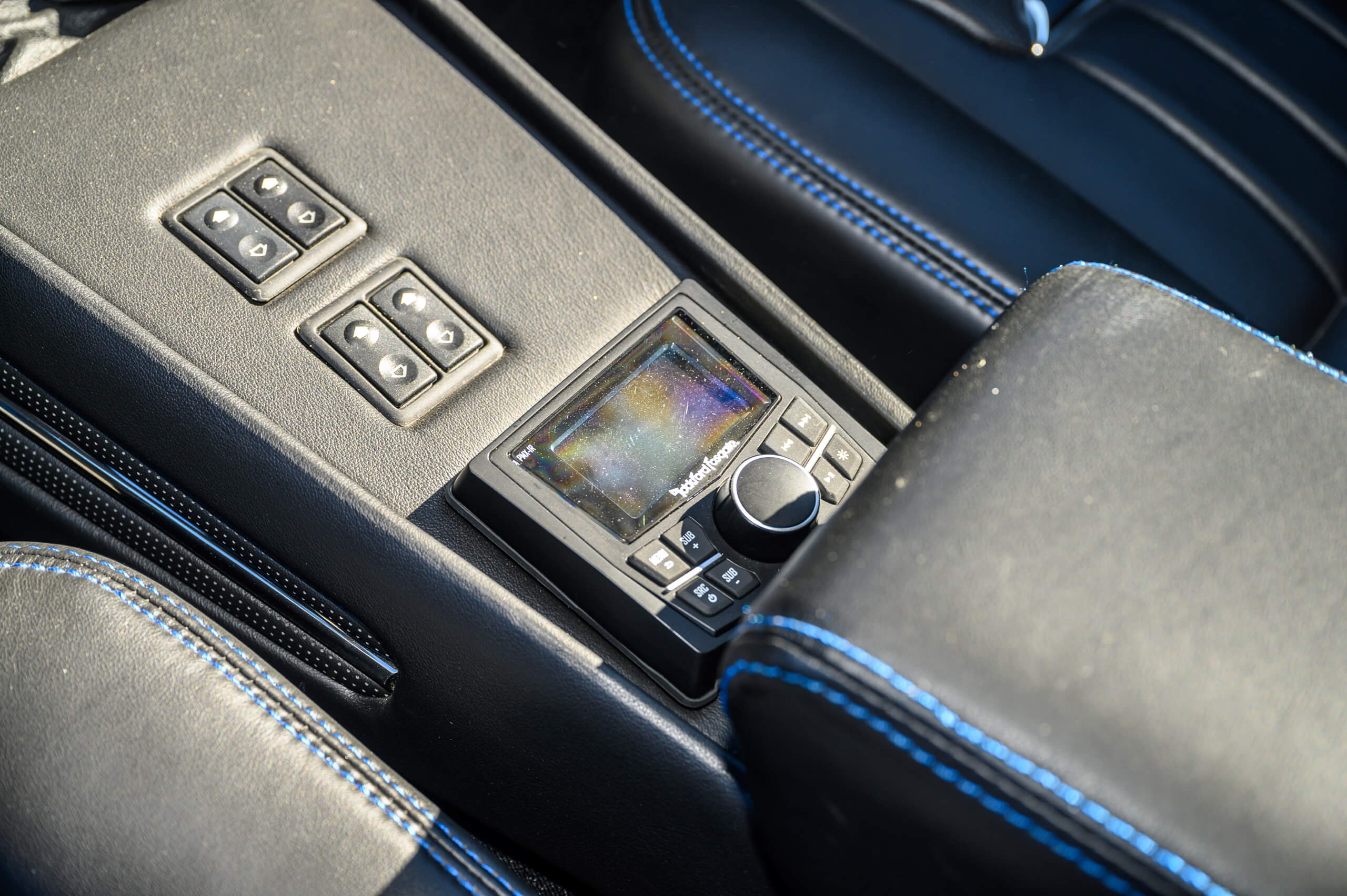 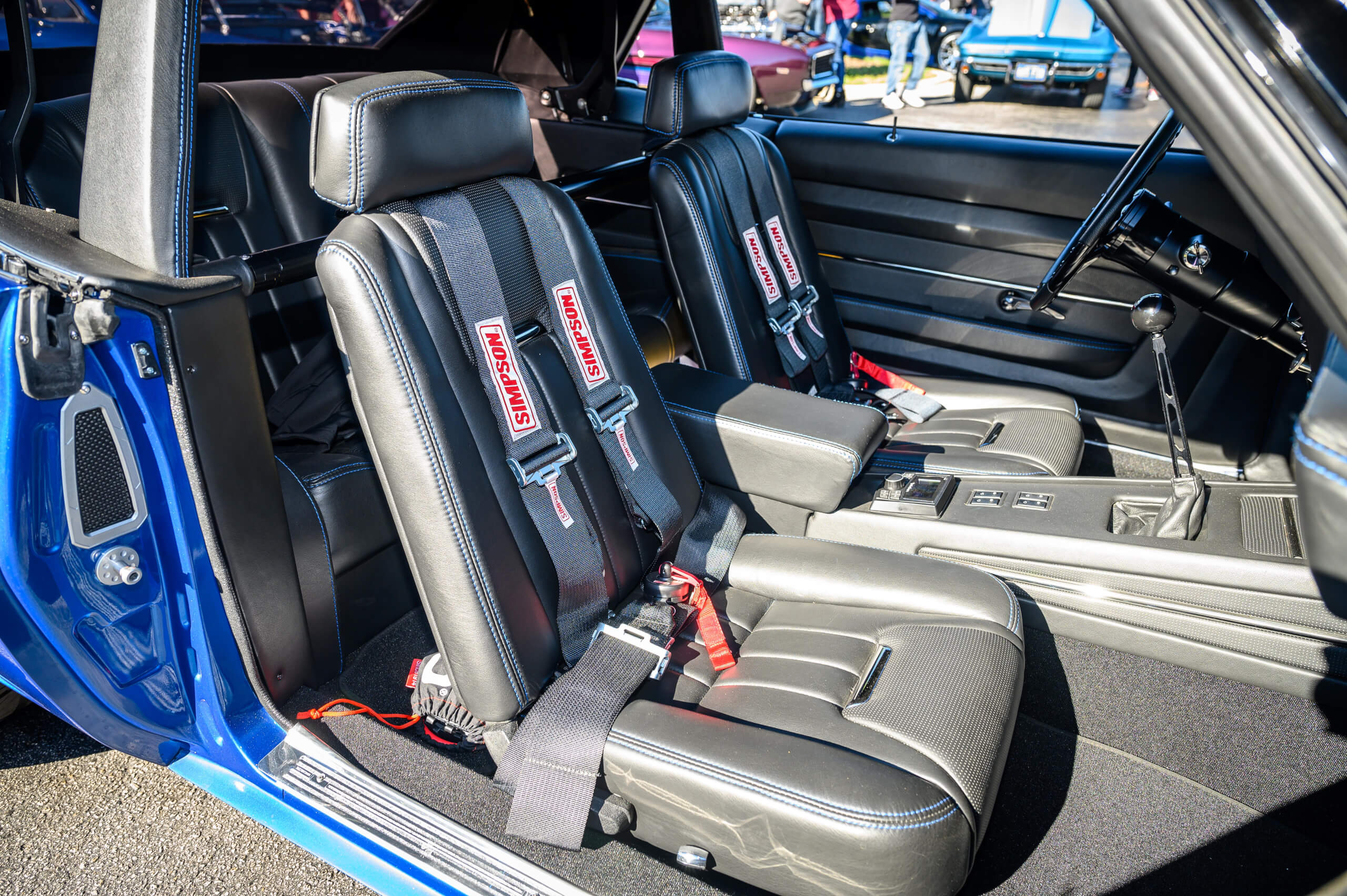 After decades of uncertainty, Brad’s Camaro has finally developed its own personality and is the dream machine he always wanted. “Driving it is a lot of fun and it’s always ready to go quick,’ laughs Brad. “There’s a big enjoyment to have something for so long and to see it finally transform into something so radical.”

That’s a lot of thrills and a big sense of accomplishment for a simple a low-buck auction find.