Hollywood’s recent Ford vs Ferrari movie has sent vintage GT40s racing into the limelight. And that’s for good reason. Those years at Le Mans in 1966, ’67 and ‘68 proved to be a heroic feat, showing that not only did the FoMoCo have the chops to mix it up with the likes of Ferrari on the track, but they could also keep ahead of them, too.

Their tale (and that of the individuals behind them) is legendary but conveying their high-octane story on the silver screen would require an arsenal of thoroughly prepared autos. The special batch of machines created for all that wheel to wheel action has since become bit a star as any on-screen counterparts.

To find out more, I spent time with one of these four-wheeled heroes, this one being the #95 1966 Ford GT40. It appears on-screen during the scene depicting the race at the 24 Hours of Daytona.

I caught up with the green machine, and it’s proud new owner, Brian Grams, at his family’s Volo Auto Museum, located in the suburbs outside of Chicago.

The vehicle was built by Racecar Replicas, based in Fraser, Michigan, some eighteen miles northeast of downtown Detroit. They also produced nine other vintage GT40 vehicles for this film’s production. To streamline the process, the entire batch was built with identical specs and then shipped to the studio.

It all starts with a low slung fiberglass body, made from a mold pulled off an original GT40, ensuring the dimensions and specs are spot on. It’s then placed onto an aluminum tube chassis, also modeled after the original’s, which would have been steel. 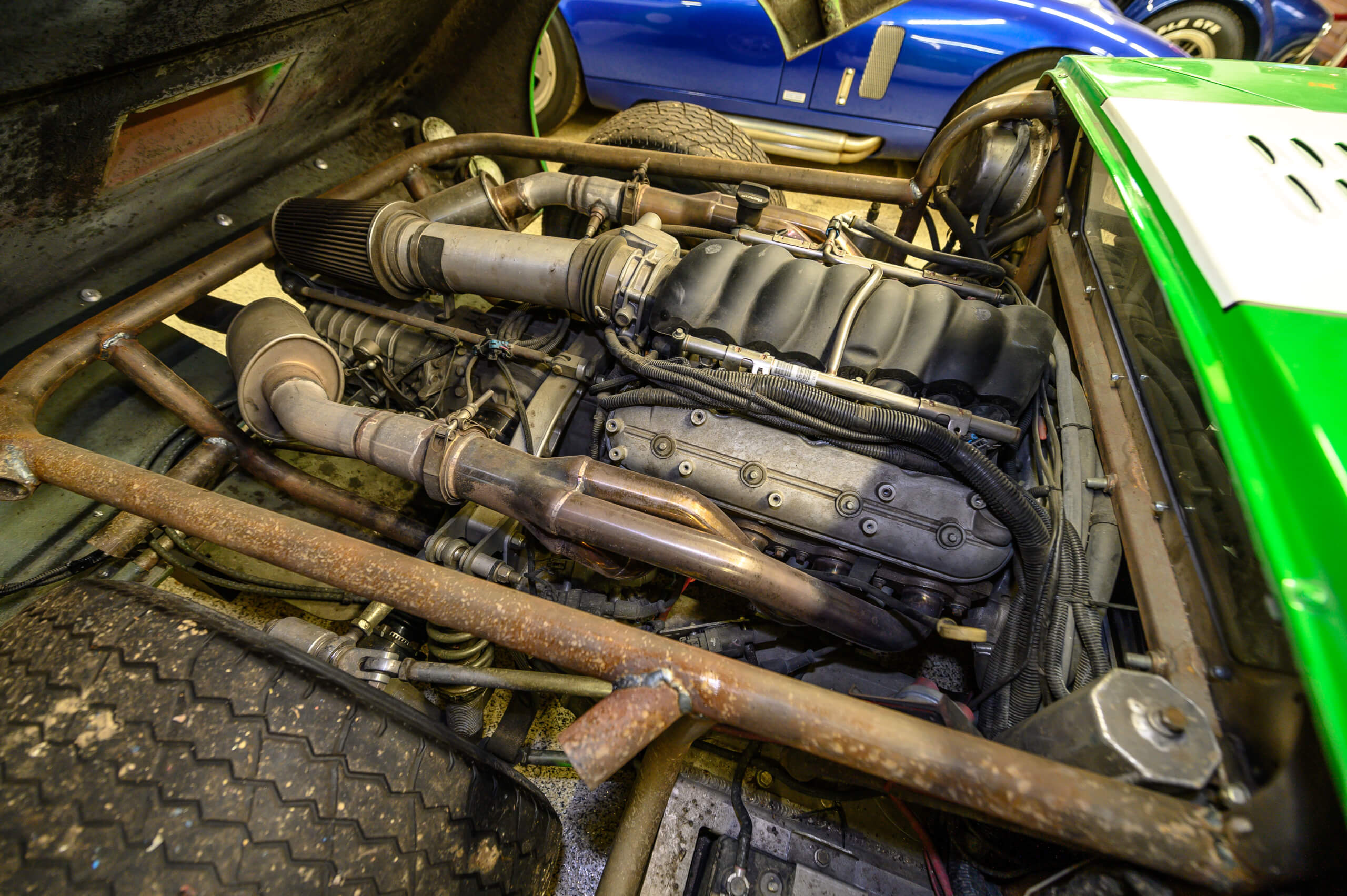 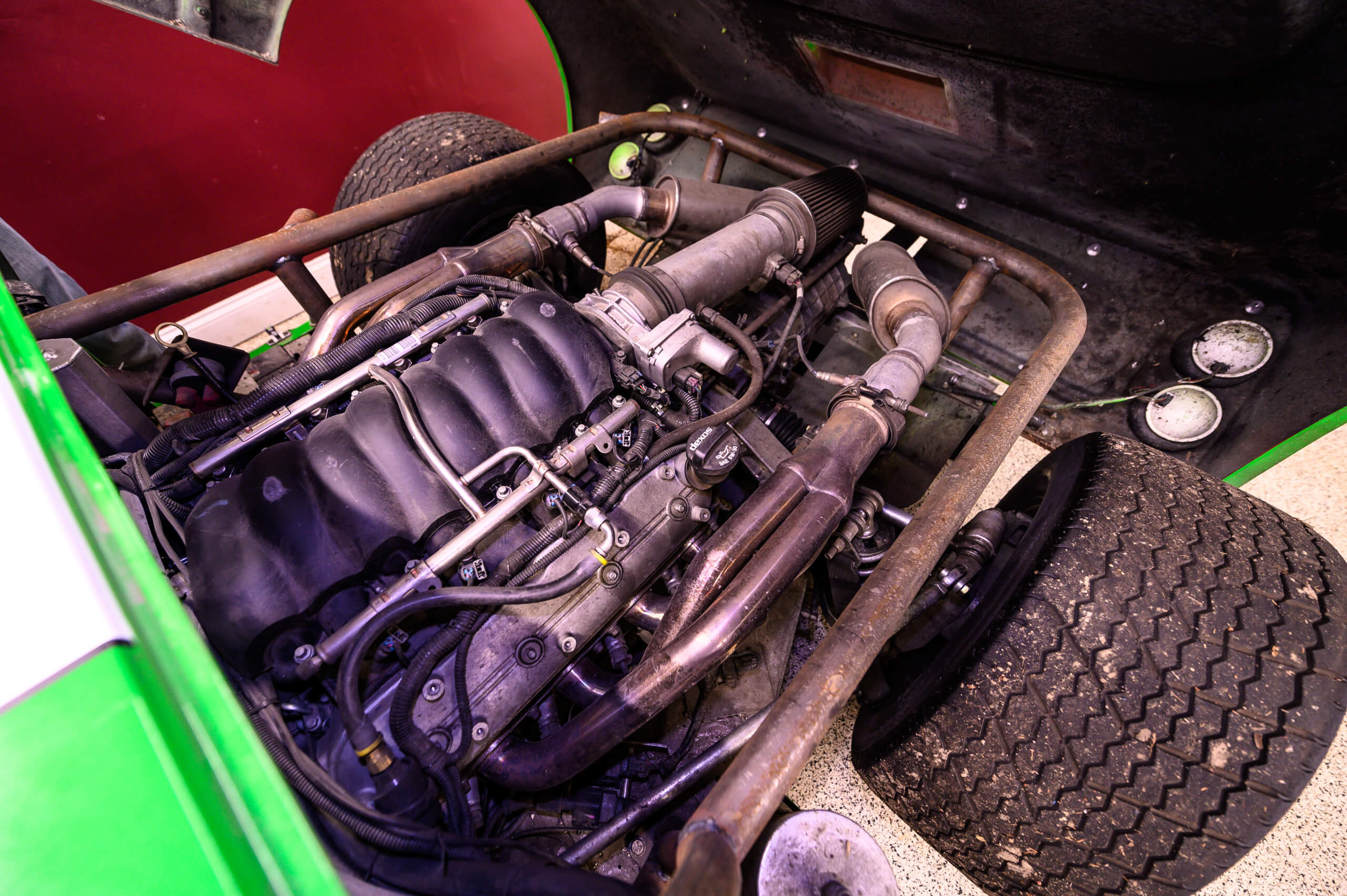 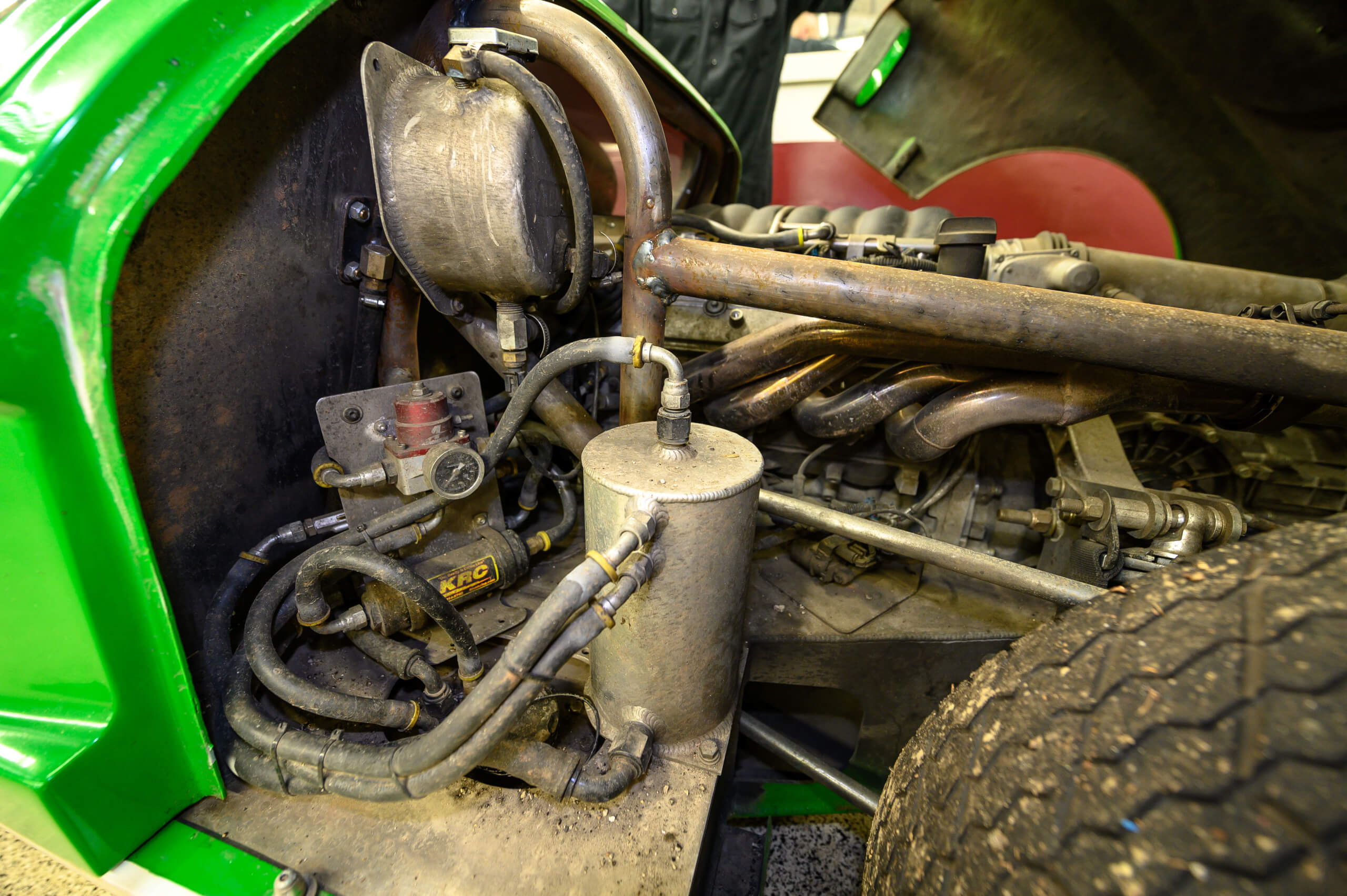 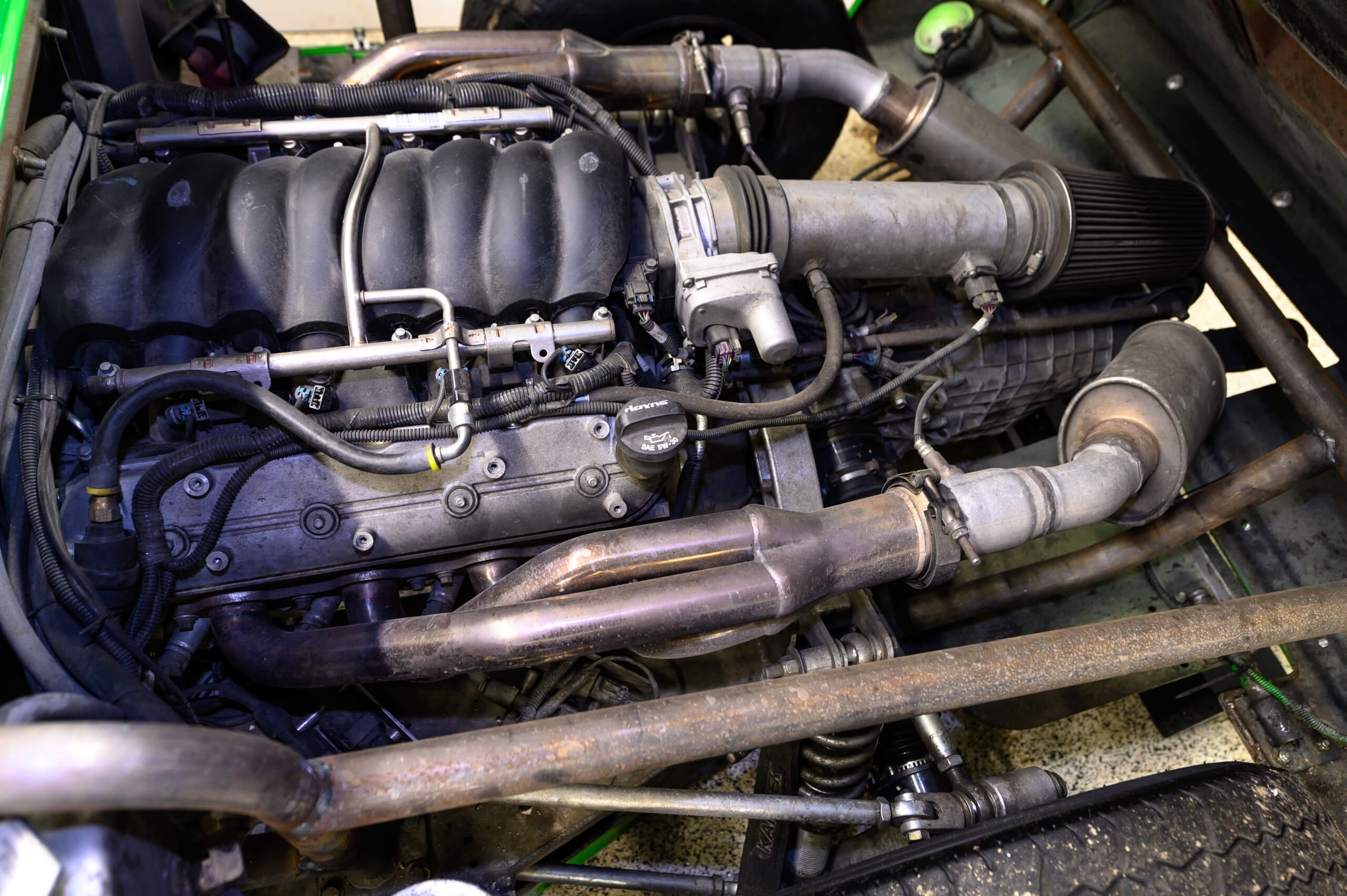 Power comes from a tried and true late-model Chevrolet LS3 6.2L V8, tucked at the rear and hiding under the massive fiberglass shell. The choice in engine kept things simple and uniform – a key asset during the hectic schedule of feature film production. If problems arose during onsite, techs could easily diagnose issues while keeping ample supplies of easy to find parts in stock. The original GT40s from this era had 427ci V8s with a noticeably different exhaust and idle tone. To help mask the difference, mufflers and resonators were installed on these new versions to quiet their rumble. More accurate sounds, revs, and effects were all added in post-production.

Mated to the engine is a Porsche transaxle, connected to the steering, which is right-hand drive.

Up at the front, undo the two quick-release twist clamps, remove the panel and you’ll find access to the car’s fuel cell, brake reservoirs, and engine cooling.

What’s In A Name? A Tight Cabin

As to be expected, the retro racer hunkers low, owning up to its name of being under forty inches high. The doors swing open super wide but are deeply cut into the roof. Contorting around them takes skill while also taking a giant step over the ultra-wide sill. Once I cleared that hurdle, I fell into the cabin, which is nothing but purpose-built. Everything I touched was cold, hard and felt ready to go fast.

There are deeply cut channels in the floor which make room for the hard-backed race seats. Ahead of the driver is a sparsely populated gauge pod, sporting just a couple of instruments and switches. Visibility is surprisingly good, thanks to narrow A-pillars, tall side windows and a large rear window, nestled between the car’s twin, and very massive, rear haunches. 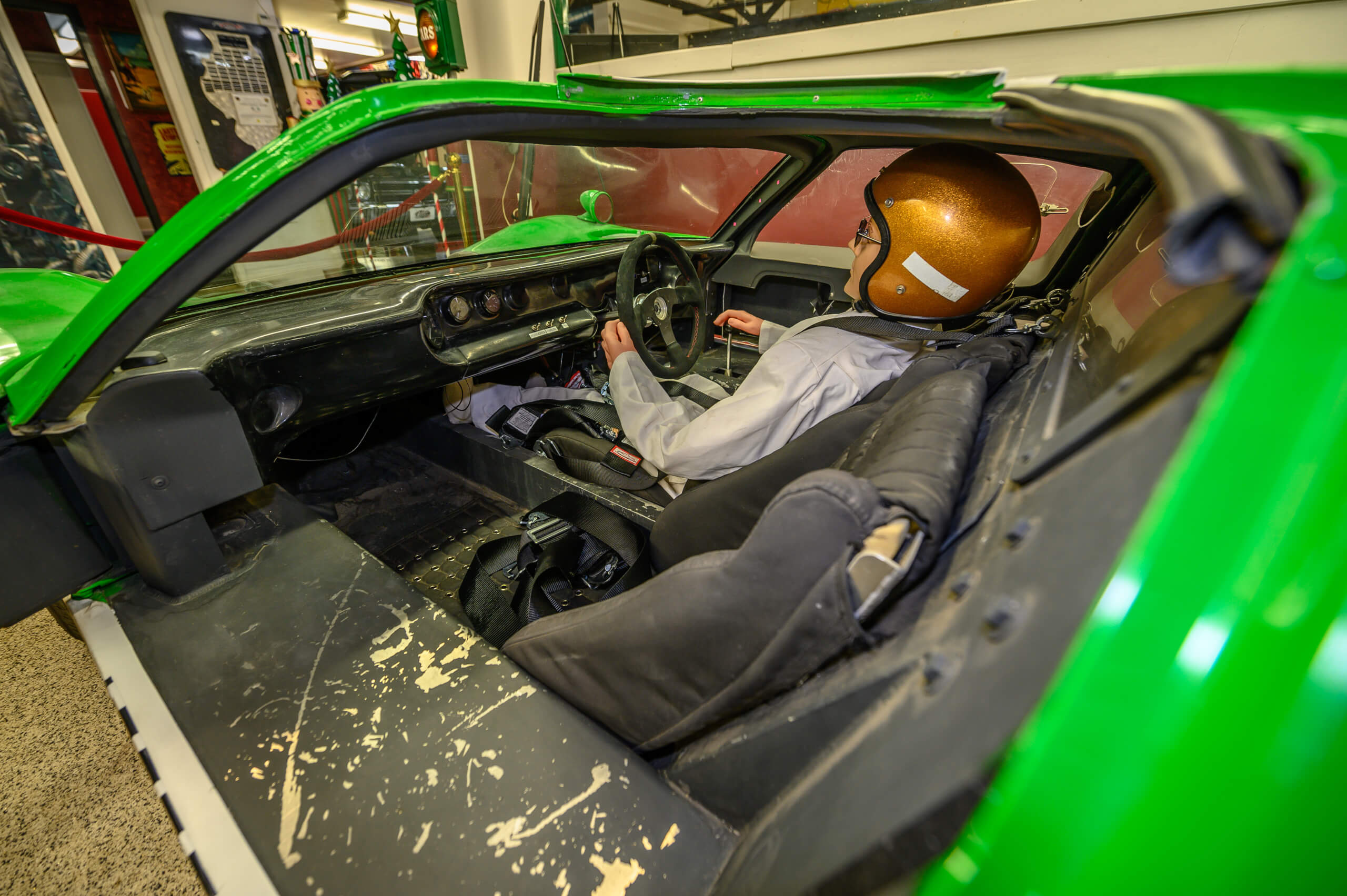 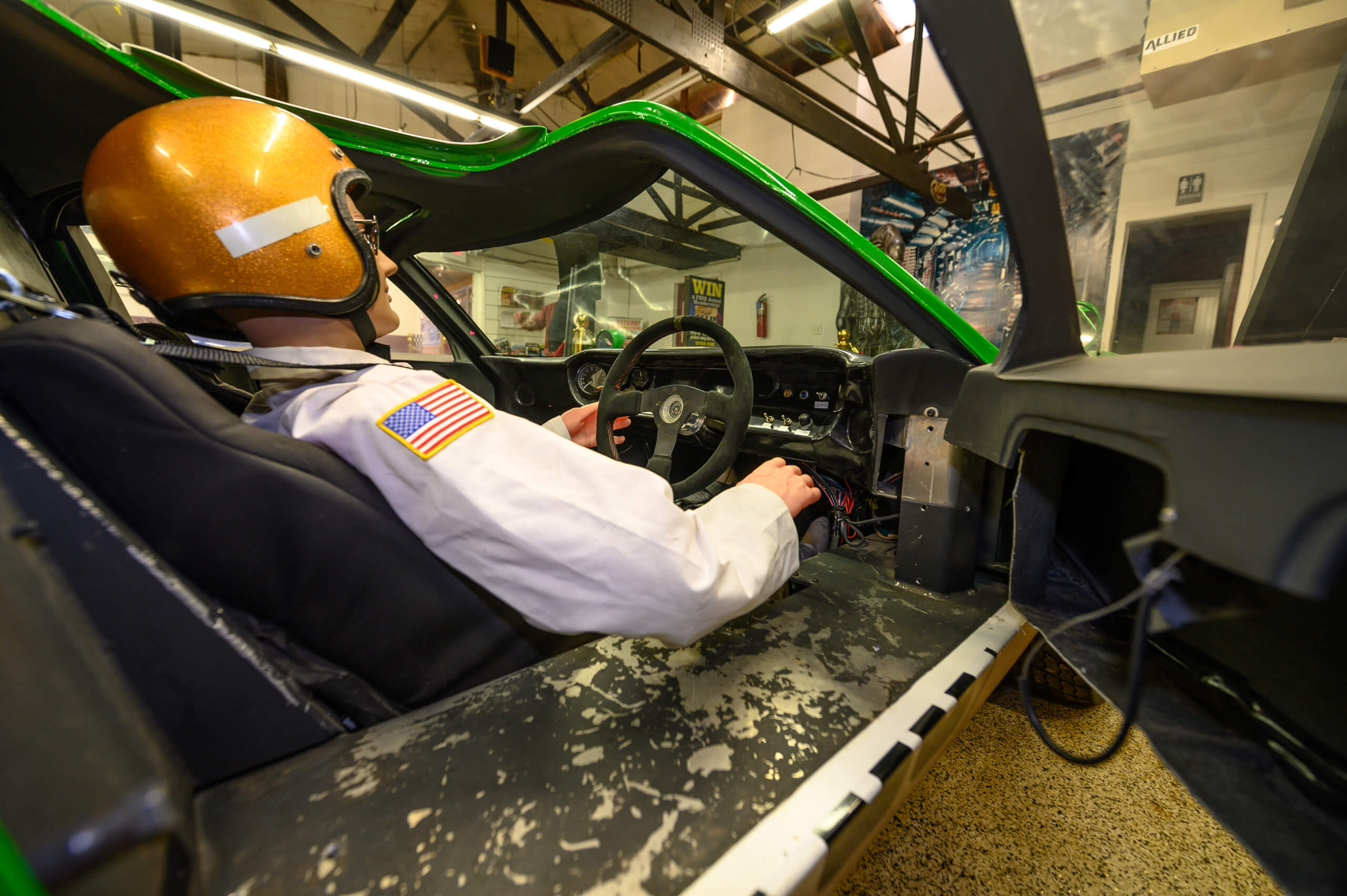 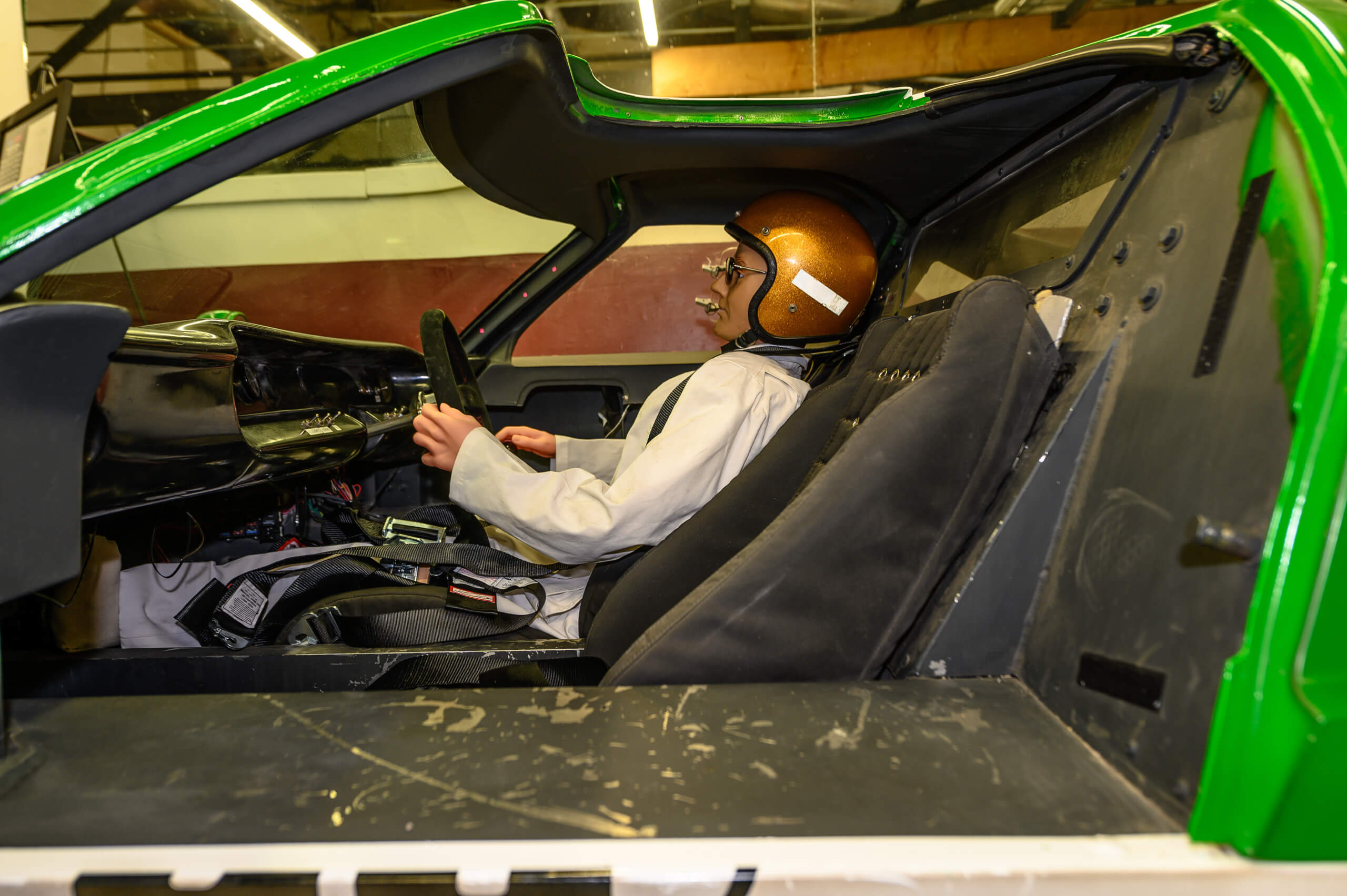 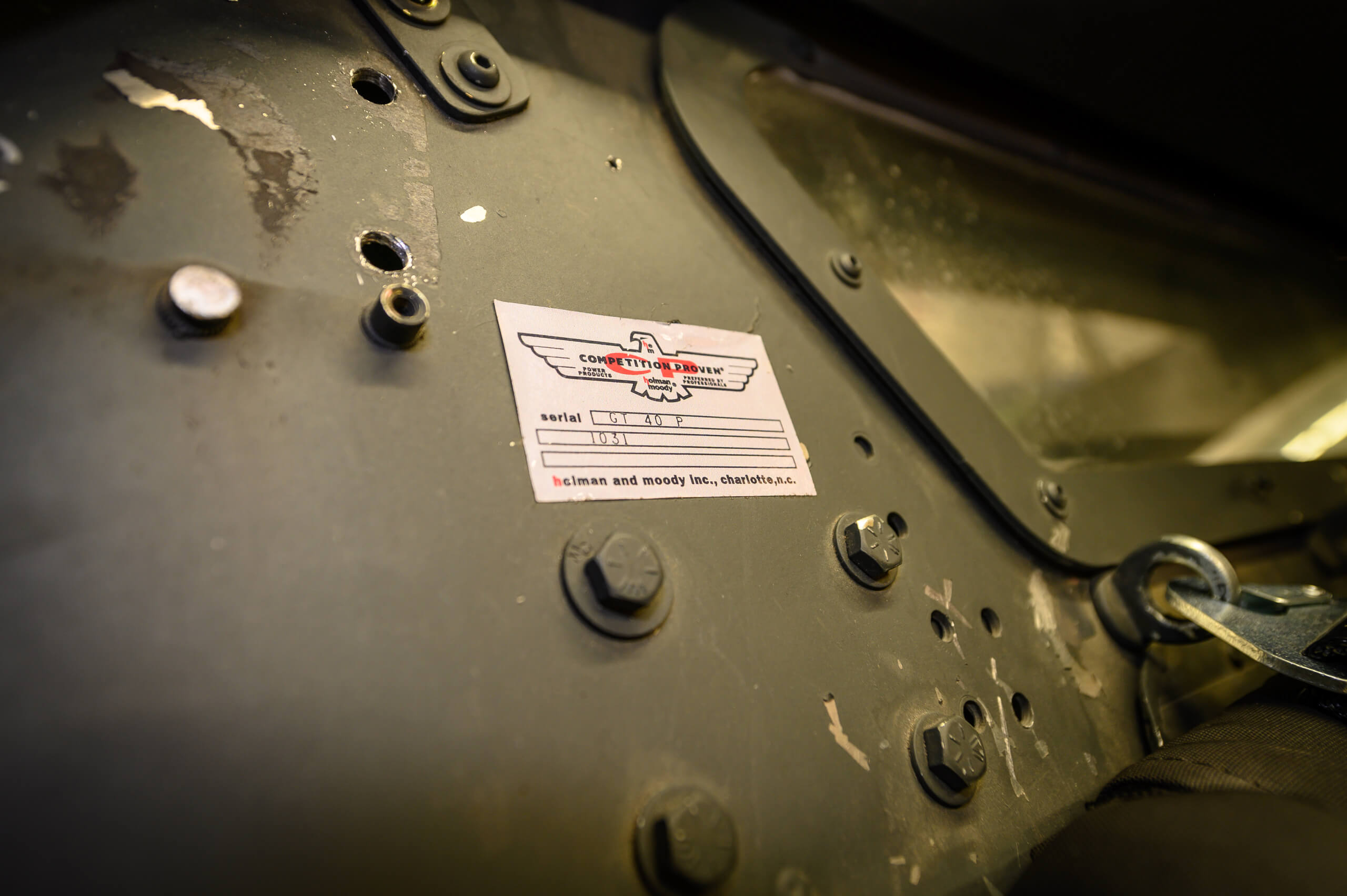 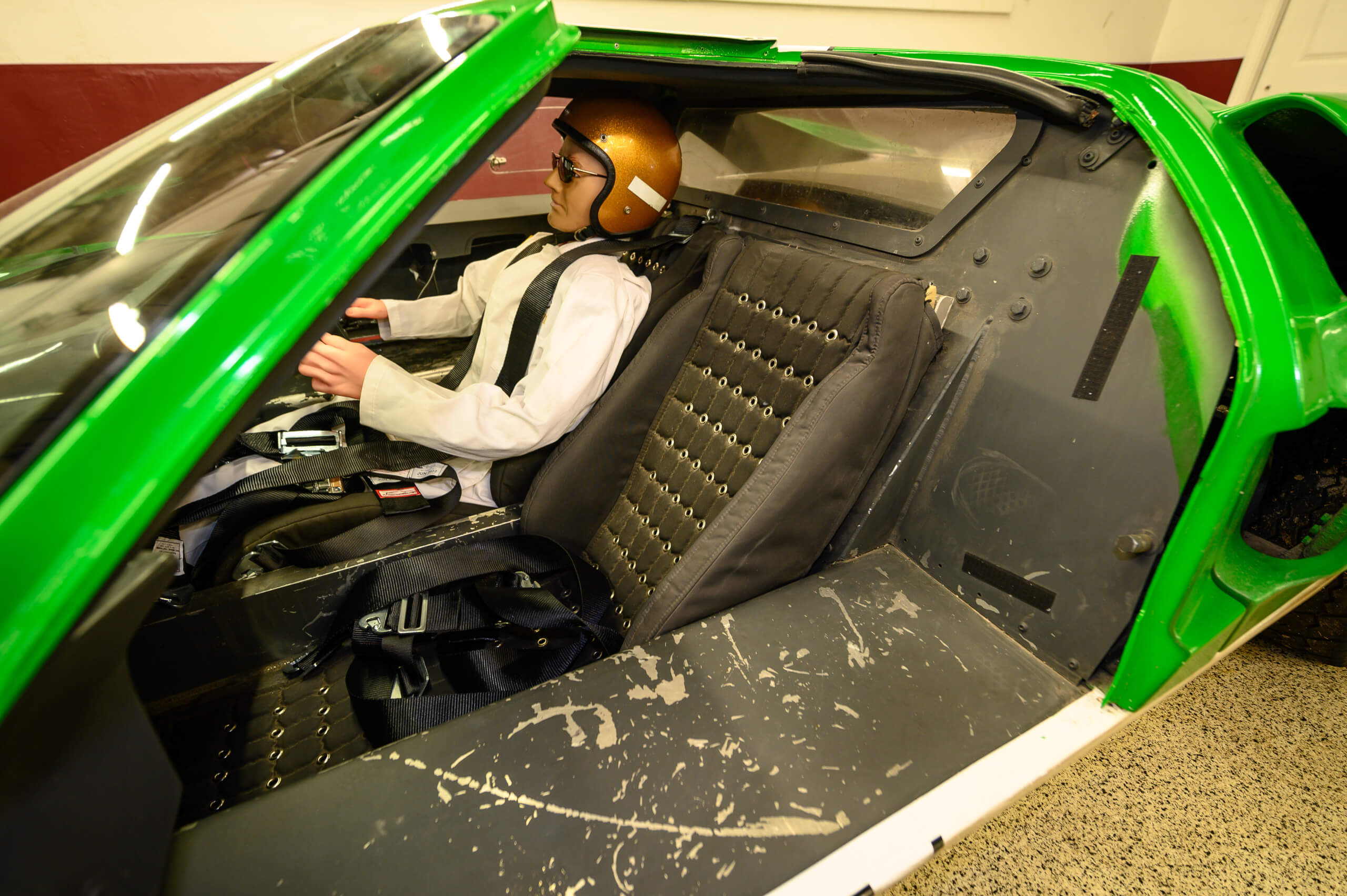 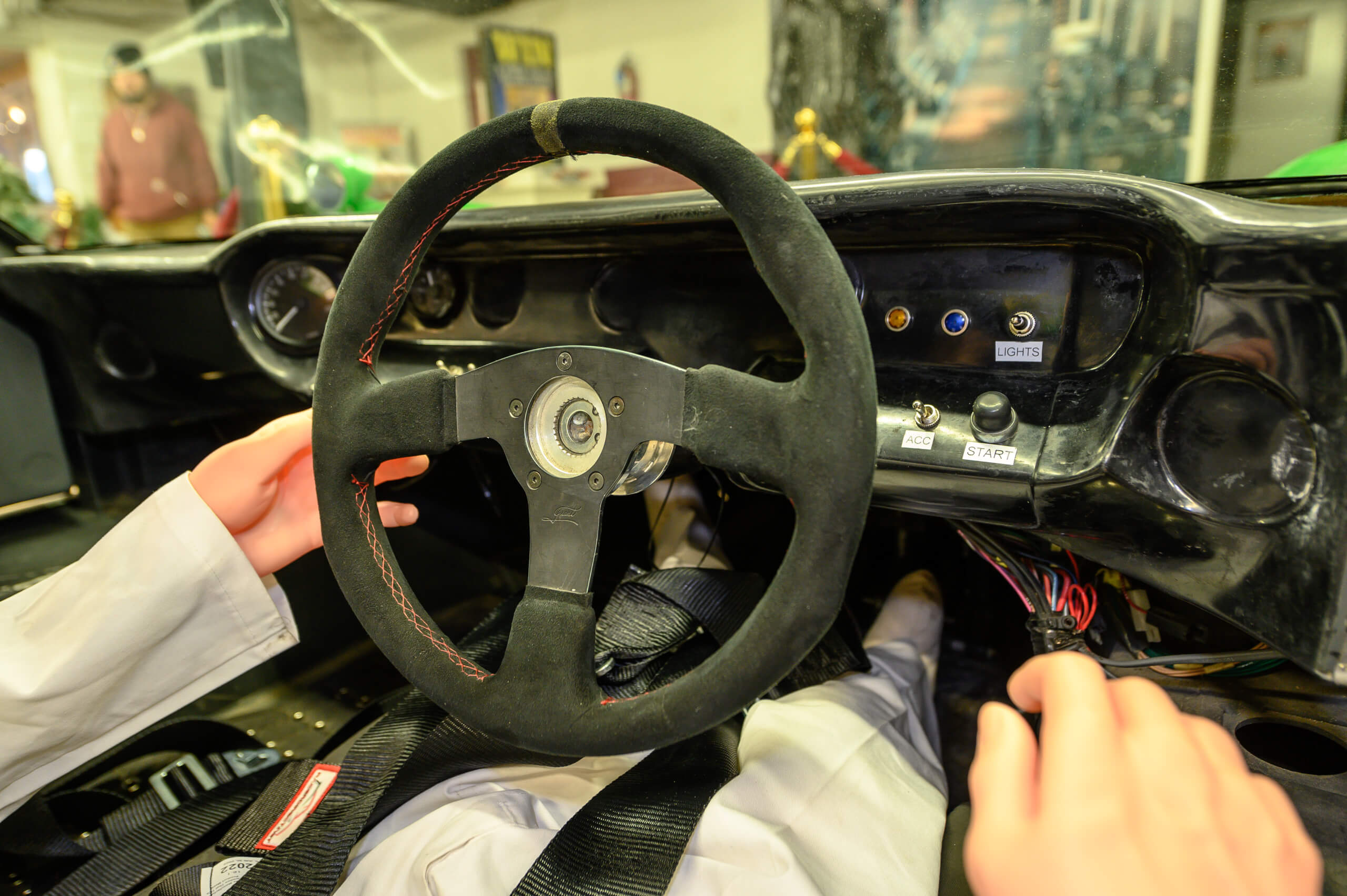 For accuracy, the studio added a Holman and Moody sticker inside the door jam, over the driver’s shoulder. They were the firm that built Ford’s stock cars for stock car racing during that period and campaigned original GT40s in the 1960s. They’re still in business today.

A Car Of Many Colors

The cars, this one included, left the Racecar Replica facility in a clear gel coat and were painted once in the hands of the movie studio. After evaluating their options, color schemes were then enhanced or altered. Many of the GT40s used in competition were painted predominately white and producers wanted to help separate them when bunched together on-screen. In the case of this #95 car, its colors were reversed allowing green to be shown more prominently.

That’s not the only livery this vehicle showed throughout the film. It was repurposed three different times, being painted red and then yellow for scenes of the Le Mans race. Images from a production book also show a scenario of it colliding with a 1965 Mustang, which may have been a scene left on the cutting room floor. 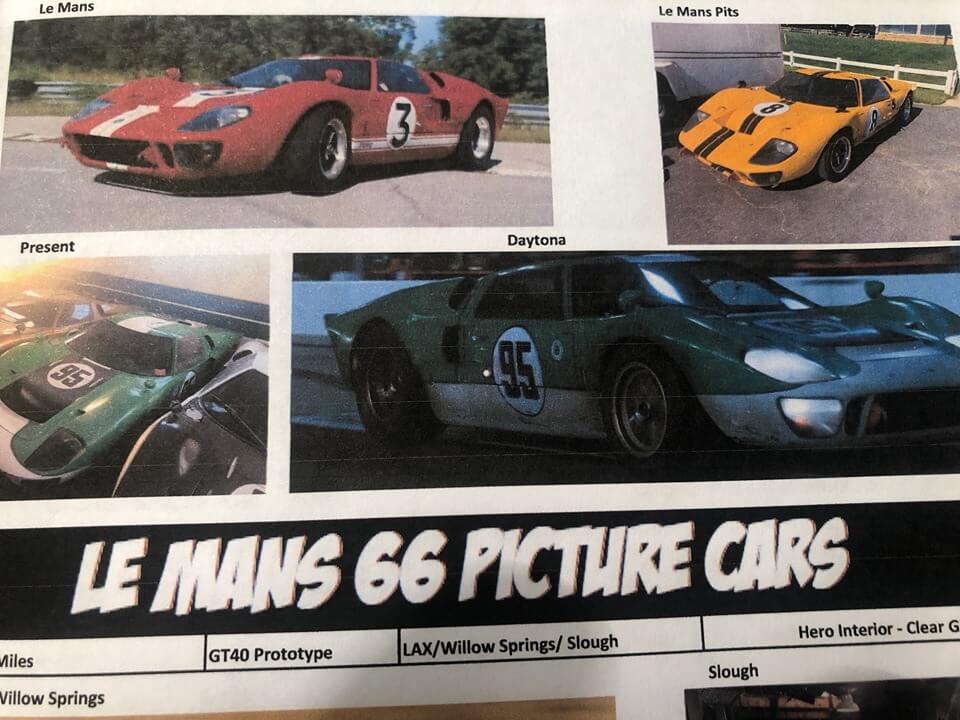 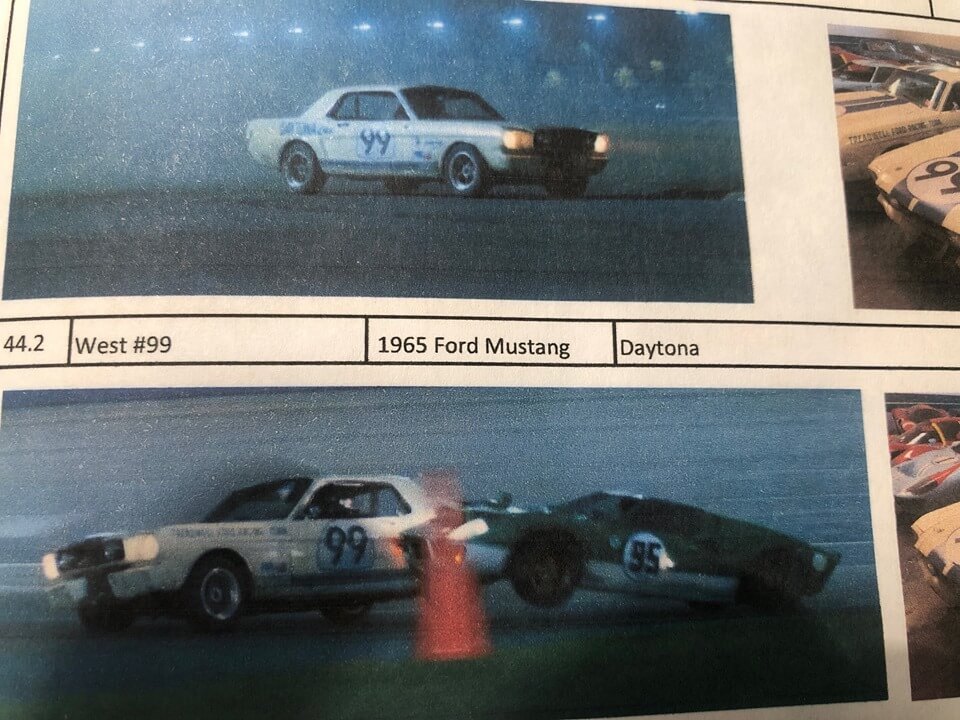 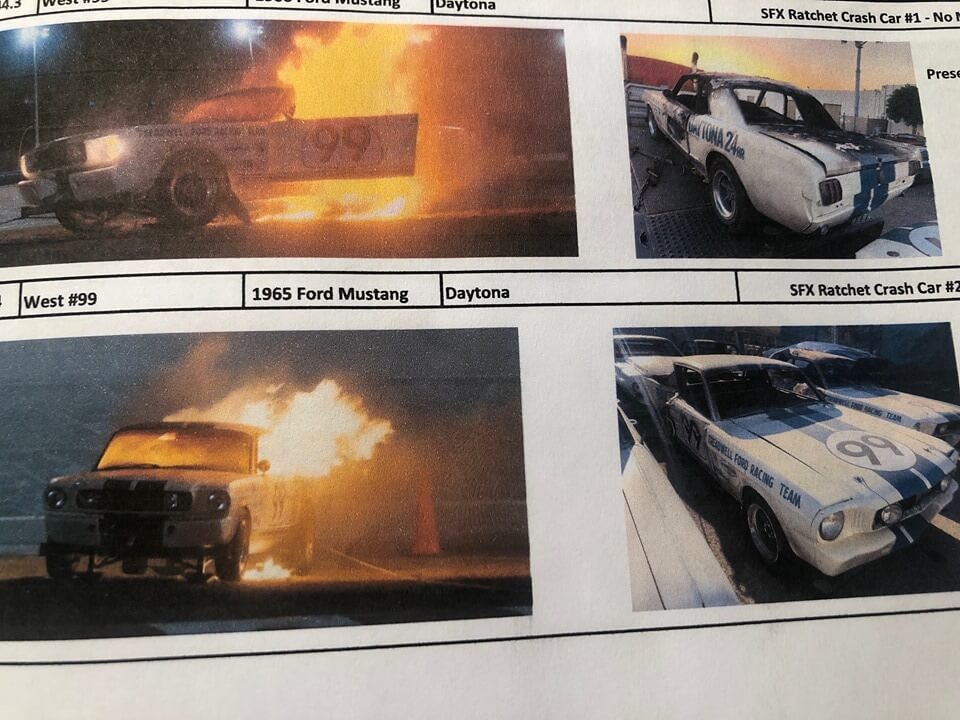 Beyond the overall paint job, other more subtle touches were added to present authenticity. As such scuffs, soot and wear and tear details were all painted on. This also included painted on the proper Goodyear branding onto the tires. 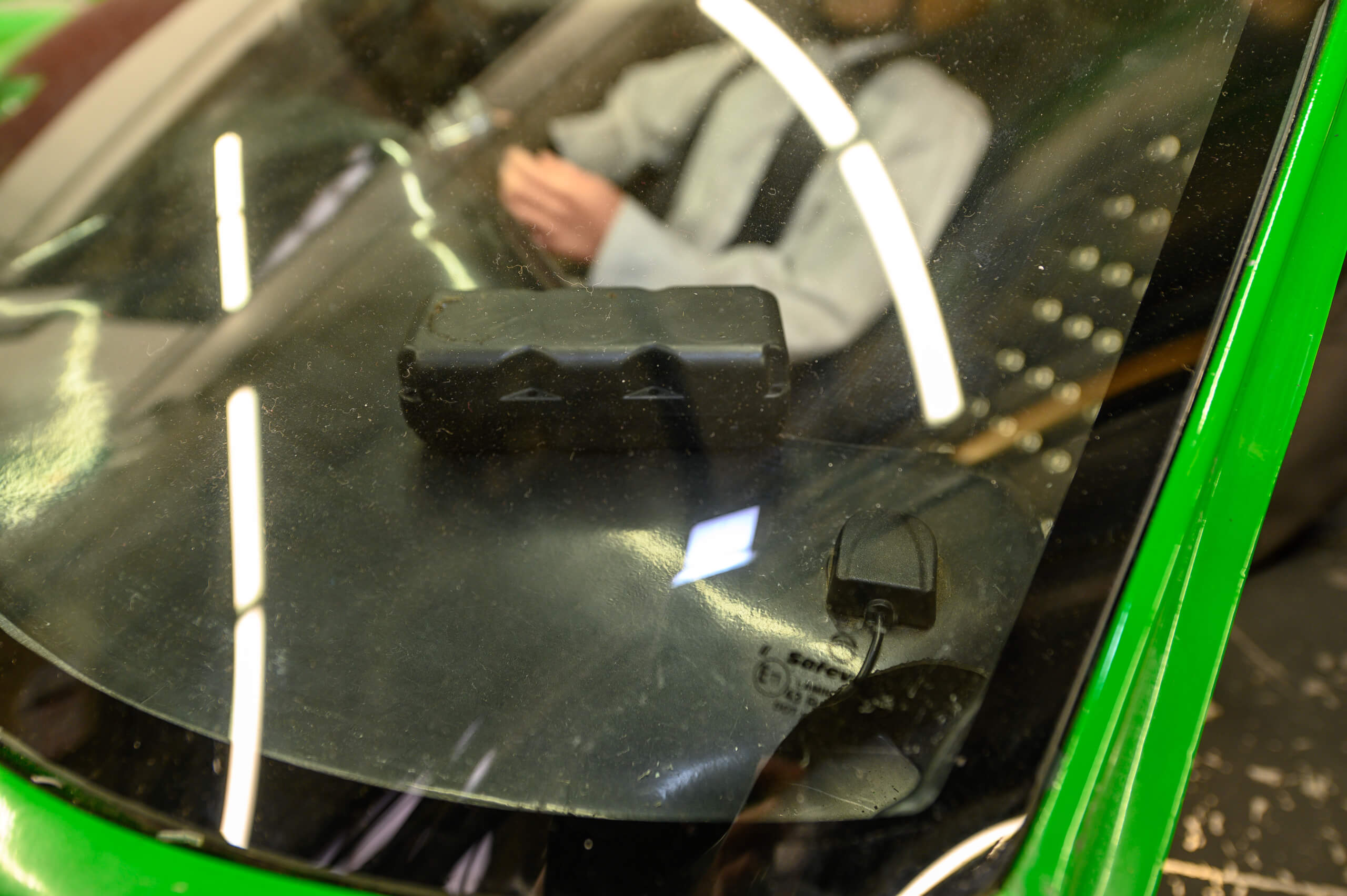 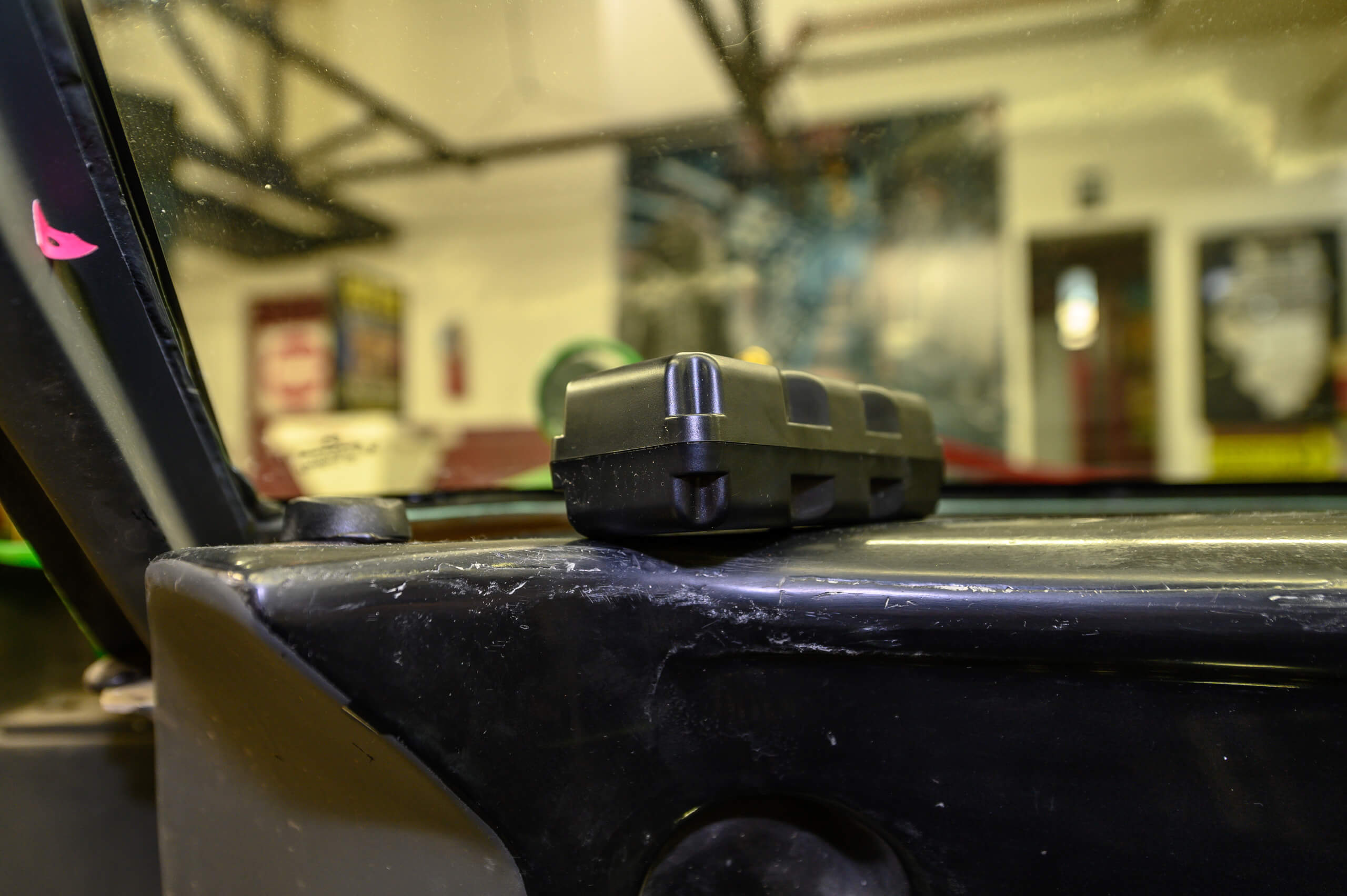 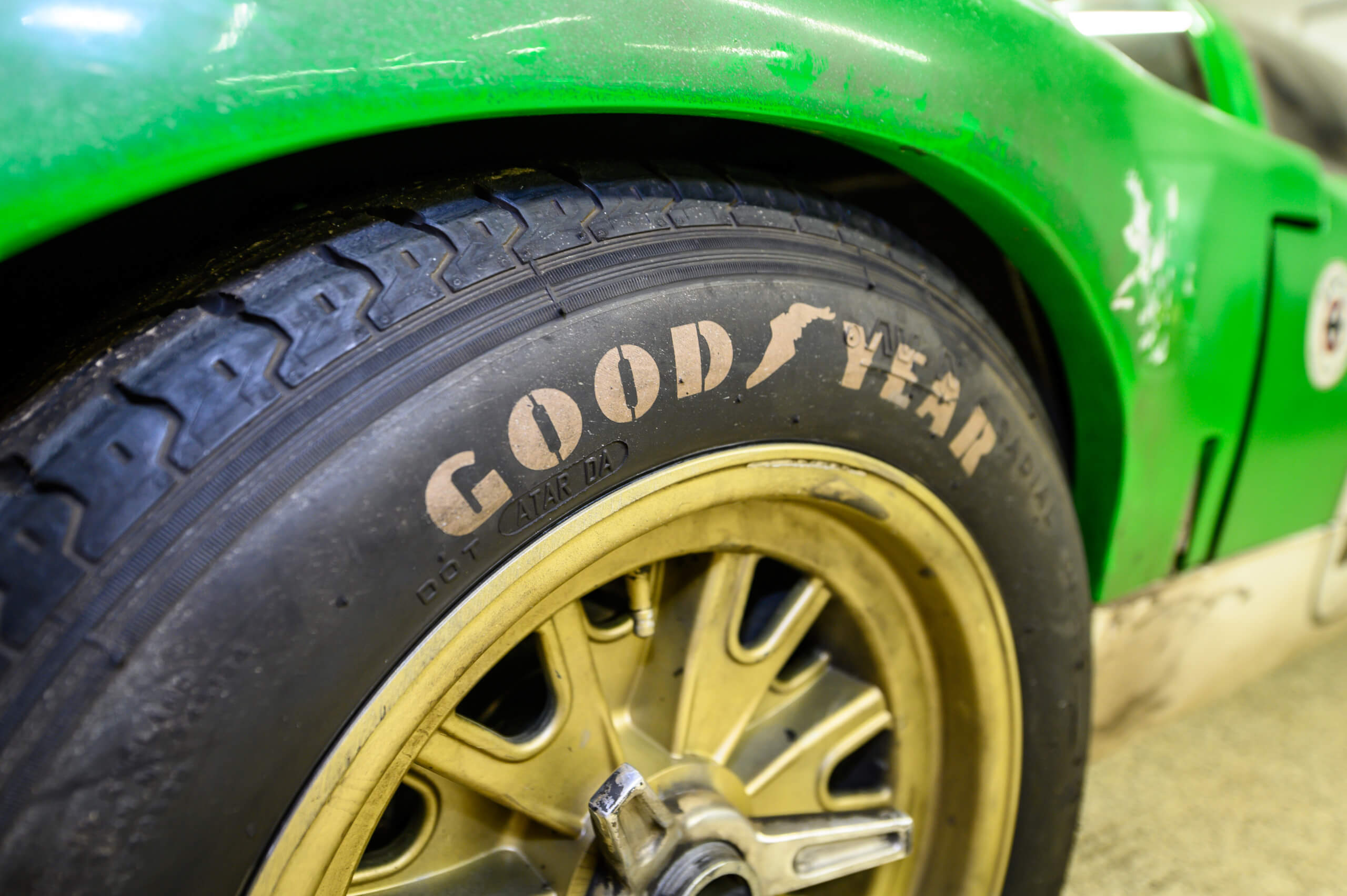 Each car also received a GPS sensor tracking system. This allowed producers to readily locate the vehicles while on the track, helping to coordinate and get them set up and in formation for elaborate maneuvers. The sensor was mounted discretely on the dash with a power pack tucked away in the footwell. When Brian acquired the car, he found sketches, showing detailed plans and diagrams for specific and intricate shots.

During the movie’s production, this #95 car was driven by Paul Dallenbach, a professional driver and instructor who has won such events as the Pikes Peak International Hill Climb on multiple occasions and has placed second at the 24 Hours of Daytona. He comes from a family of racers, with a father who competed in IndyCar during the 1970s and brother who raced NASCAR.

According to Brian, Paul reported he averaged speeds of around 130 mph during the shooting. He also conveyed the cars were capable of much more but held back by the tires, selected because they had a vintage look but were lacking in grip. During the 1966 Daytona race, the GT40s were clocking speeds of 170mph and nearly 200mph on the backstretch.

While keeping speeds significantly lower, Brian also attests traction doesn’t come easily. After some brief time on the roads around the family’s museum, he’s found the racecar is way more at home on a proper track. “You feel every bump and crack with the ultra stiff suspension,’ laughs the enthusiast. “Even in second gear and keeping the throttle light, the car just breaks out from underneath you. It just longs to go all out.”