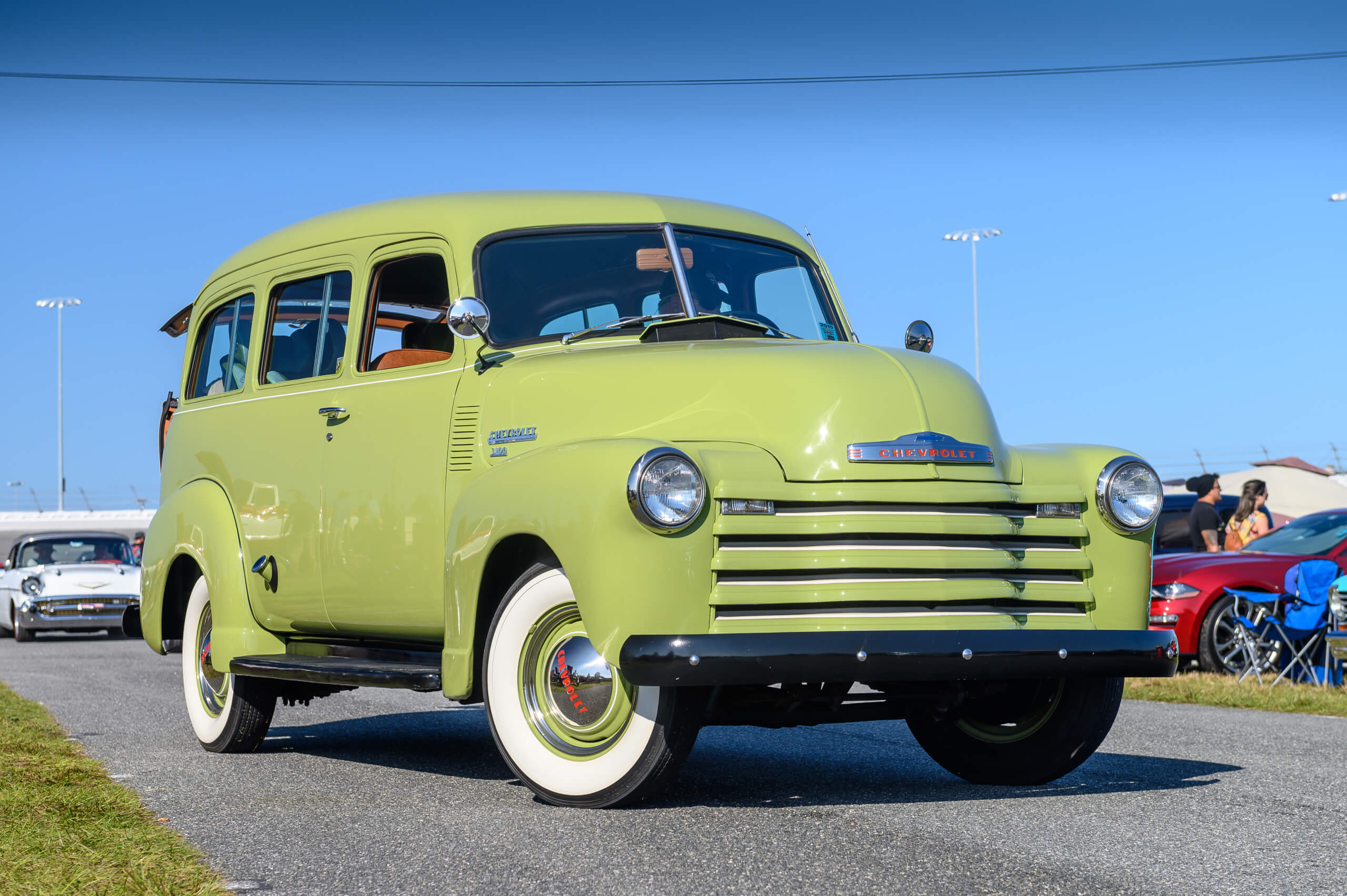 David Hart’s third restoration project was the result of combining the best of his past two accomplishments. “First I restored a car, then a pickup,’ explains the enthusiast, who got the itch for a special SUV. “For what came next, I was ready for something new and wanted something different.” What he came across was different indeed, finding a 1949 Chevrolet Suburban Carryall.

He spied the hauler while attending a Pennsylvania car show in the summer of 1989. It was parked in some woods behind a house. After knocking on the door and inquiring, it turned out the old Chevy was up for sale. “The seller’s dad had bought it in the early 1970s,’ explains David. “For the next decade, he used it every day for his general contracting and home repair business.”

As such, the vehicle was loaded to bear, sporting a fabricated roof rack for longer supplies. Inside, all the seating had been removed, making room for a repurposed metal kitchen cabinet, bolted to the driver’s side. “The drawers and cabinets held his hand tools, loose items and small hardware,’ laughs David. After settling on a price, he then began the laborious process of removing the workhorse, which had sunk down deep into thick mud. Two days were needed, but after slowly jacking up the vehicle inch by inch, getting the tires to hold air and slowly pulling it out, the classic Chevy came free.

Once trailed back to his home, David began a complete restoration and overhaul. Before going into his garage, the fenders and front end came off, along with the engine and transmission which were removed. Now ready for bodywork, David set to patching, welding and repairing all the rust holes, dents and cracks from where the factory lead had worn through.

While the craftsman returned the sheet metal to arrow straight condition, one important piece was left untouched. The clamshell tailgate showed very noticeable, but very important, road scars. “The inside had all these ‘historic dents’, as I call them, that I couldn’t bear to see removed,’ explains David. “They had so much character and speak to the working nature of the truck.” That desire to preserve did take some extra effort. “The tailgate was sent out for sandblasting and after the shop was done, they set it outside,’ said David. “The junkman came and mistakenly took it, thinking it scrap. He had to be run done and stopped to get it back.”

For the exterior paint color, David selected Apple Green, a color he was closely tied to. “As a kid, I remember seeing a 1952 Chevy Deluxe in that color. I pictured it on the truck and knew it was perfect,’ said David.

While the classic already proved its worth for hauling tools and supplies, David set about getting the cabin ready to haul a more precious cargo: family and friends. With only the driver’s seat to work with, he set about tracking down the other rows, working extra hard to find the second row. “Those legs slide into special keyholes in the floor,’ said David. “It took a long time to get it but it was worth the hunt to have the correct piece that is removable.”

As for the truck’s powertrain, a proper inspection revealed the original engine was no longer good. In the corner of his garage, David had a rebuilt 1969 Chevrolet 250ci straight-six-cylinder engine leftover from another project and installed it under the Suburban’s hood. Other upgrades included adding a radio and a passenger-side rearview mirror.

Returning to the Start

The project was completed in 2001 and turned out just as David had imagined. “I didn’t want to make it into a street rod,’ explains David. “I wanted it as original and correct as possible.” With a final product, David kept good on a promise he made over ten years ago. “The son who sold me the truck asked if I ever finished it, to bring it back and show him the final product,’ said David. “True to my word, I drove it back to near exactly where we drug it out . He took pictures and sent them right away to his dad, who was in a nursing home. When he saw the finished truck, he was in tears.”

That previous owner isn’t the only one who has stirred emotions resulting from the special SUV. “My father owned a 1950 Chevy panel truck. He’d drive into town, hauling fruit and vegetables from our family farm,’ gushes David. “I remember being a really small kid and tagging along. I’d sit on a banana crate, looking out over the dash as we drove along. Now, every time I’m behind the wheel of this Chevy, all those memories come flooding back.“