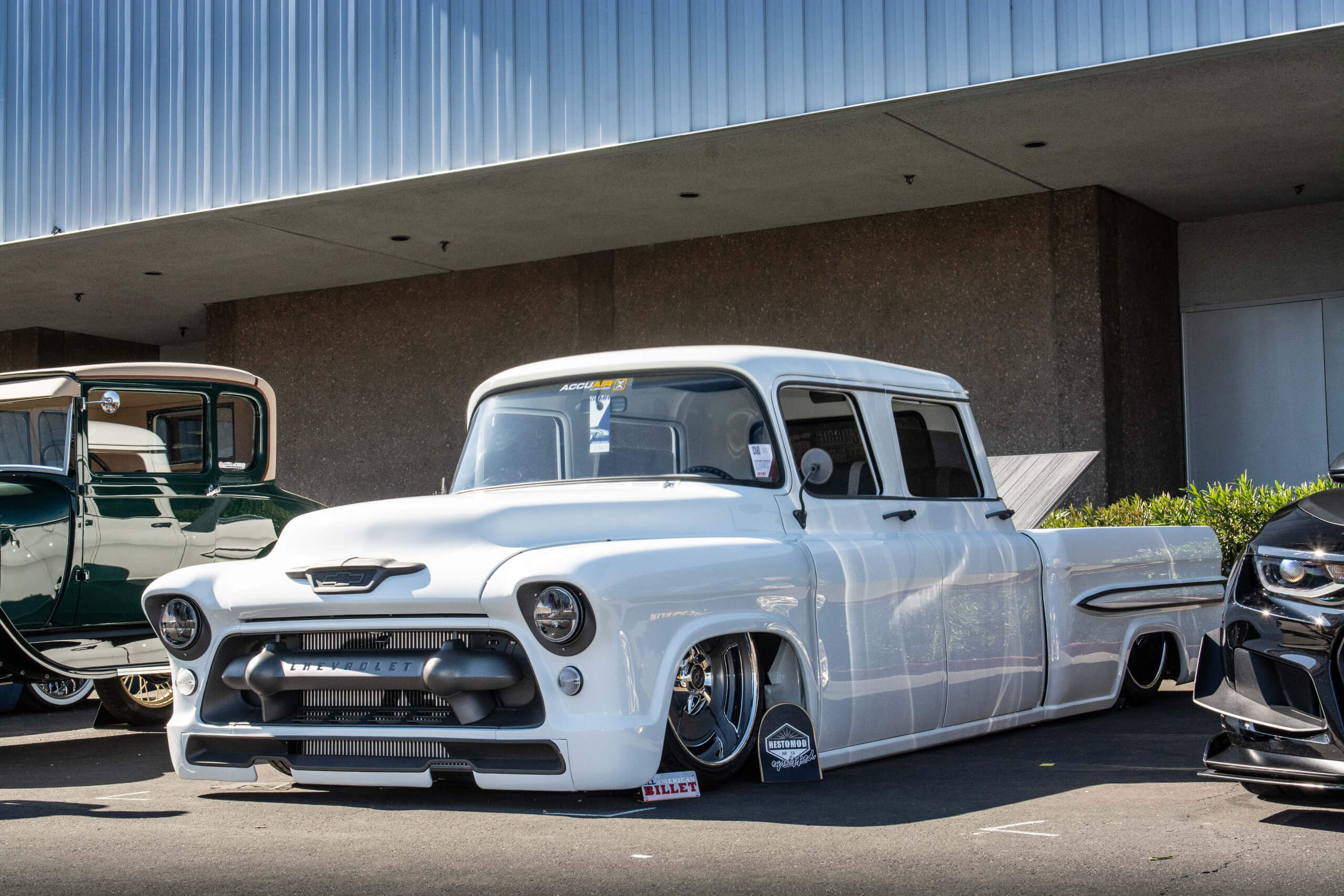 During the last big push to complete his truck, craftsman Dan Smalley was in the dark. Not metaphorically but literally. Hailing from northern California, the last few weeks have been marked by raging fires and rolling blackouts. “In the days before our debut here at SEMA, we were pushed to the limits,’ explains Dan’ dad, Guy, who helped on the project. “There was almost three days of no power, forcing us to rely on generators to get everything done.”

At that point, all the guys had together on the unique 1955 Chevy crew cab was the chassis and bed and nothing but a whole lot of assembling to do. “We worked through the night during those days and got it all done,’ said Guy.

The project got started in 2017 when Dan discovered the rusty crew cab hauler sitting way out in a farmer’s field. The unique body style was never built by General Motors but rather through a third-party coachbuilder. Dan thinks his ride pulled military duty but is still working to confirm its origins. No matter its past, it’s one cool ride and he set out to take it to the next level. “He’s always had a talent and mindset for thinking things up, drawing them out and then building them,’ gushes Guy.

A custom GSI chassis was highly modified and serves as the foundation. To it, an air suspension was installed to achieve the way down low look. From there, lots of bodywork fabrication was required. The stock hood, fenders, and cab were retained but the doors and rooflines were rebuilt. Other unique touches included grafting in the bed panels from a 1958 Chevy Apache. Custom trim with Dan’s shop logos was made and coated in Cerakote material, a substance usually found on gun barrels. “It makes for a durable, matte finish,’ explains Guy. It also stands out nicely with the 2019 Mercedes-Benz white paint Dan selected to paint the truck in.

Under the hood lies a twin-turbocharged Duramax diesel engine, delivering over 1,400 horsepower. Around back, Dan used composite boat decking with a wood grain look to cover the bed. Inside the color-matching cabin are Snowden seats, a custom console and many other hand-fabbed touches. 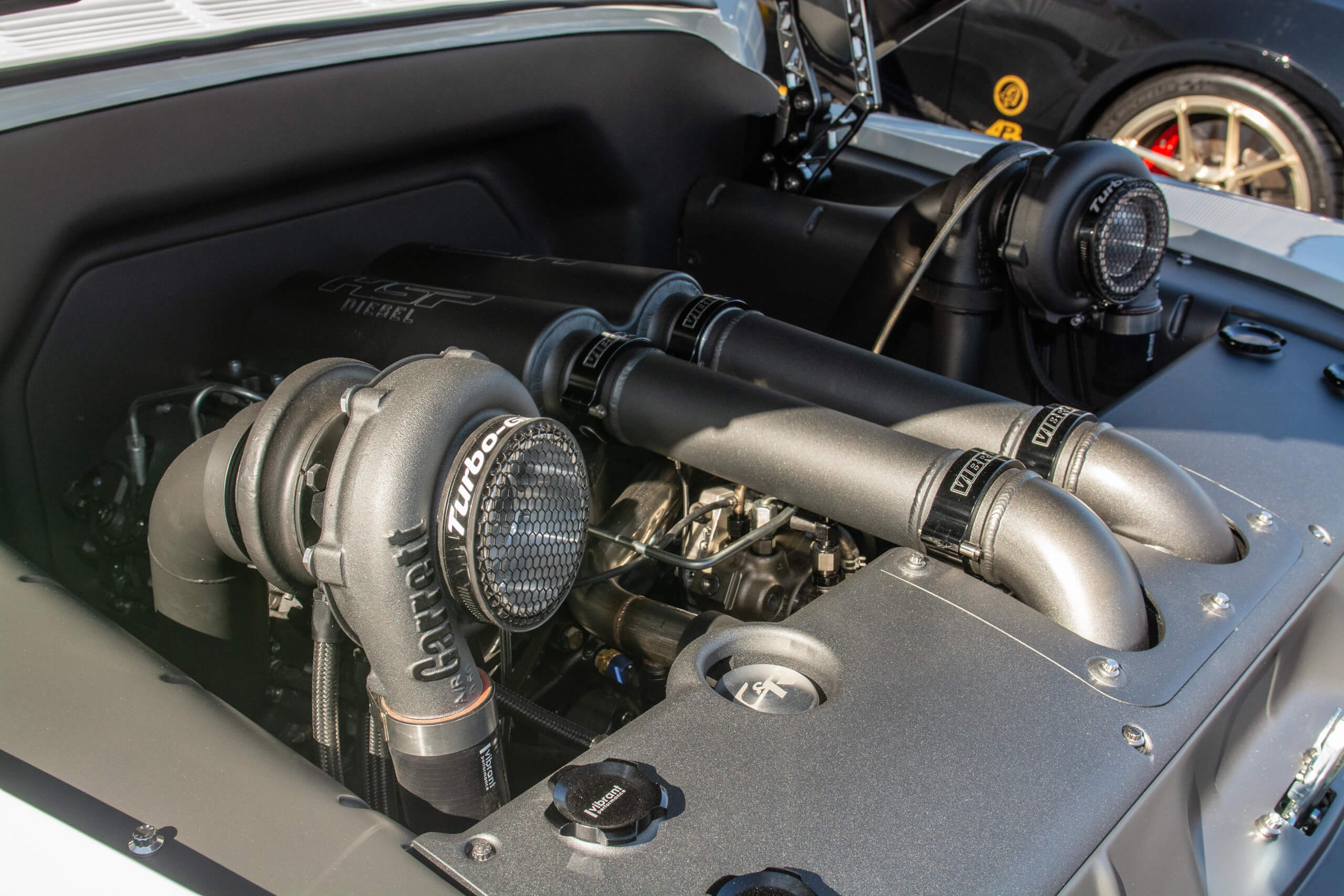 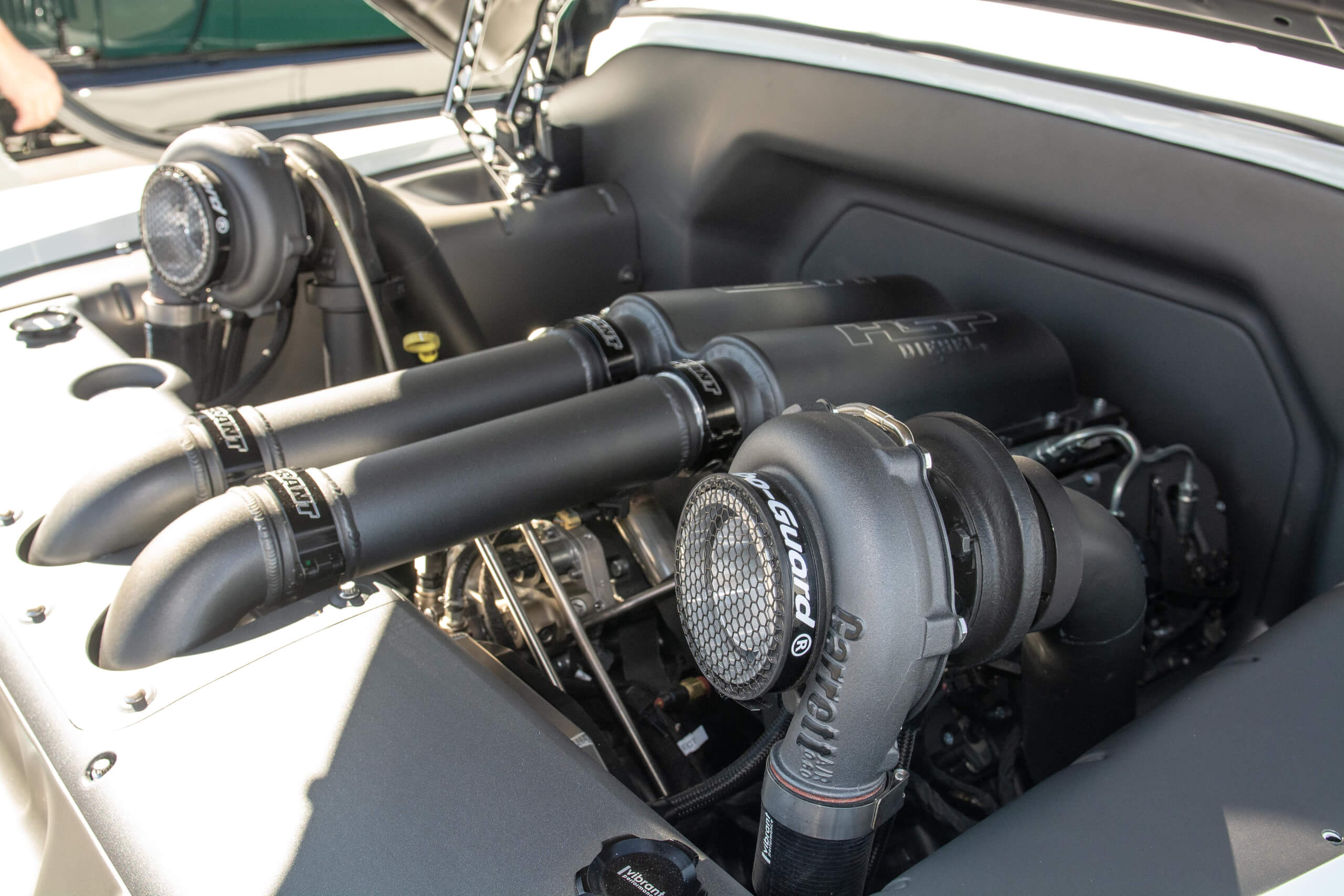 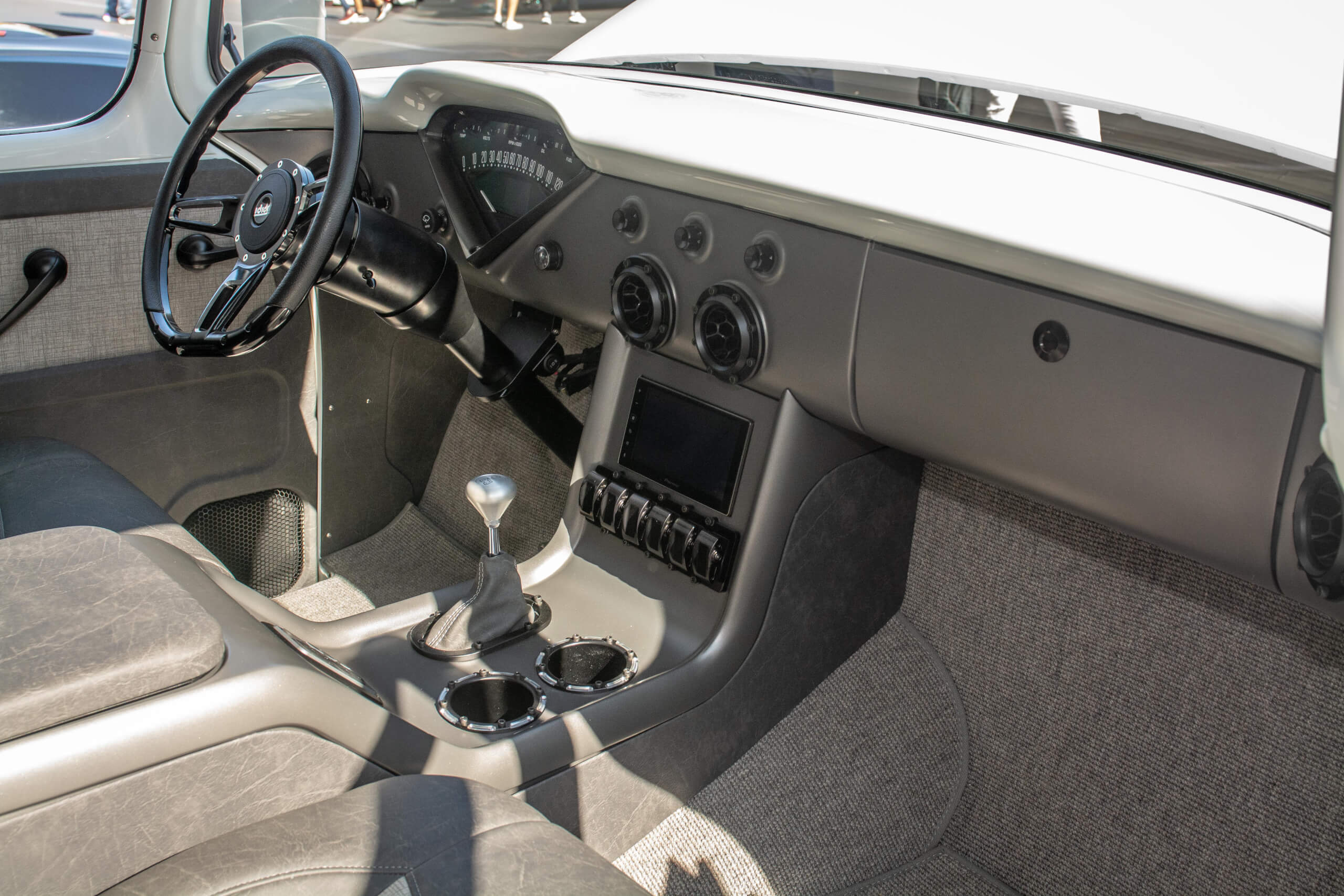 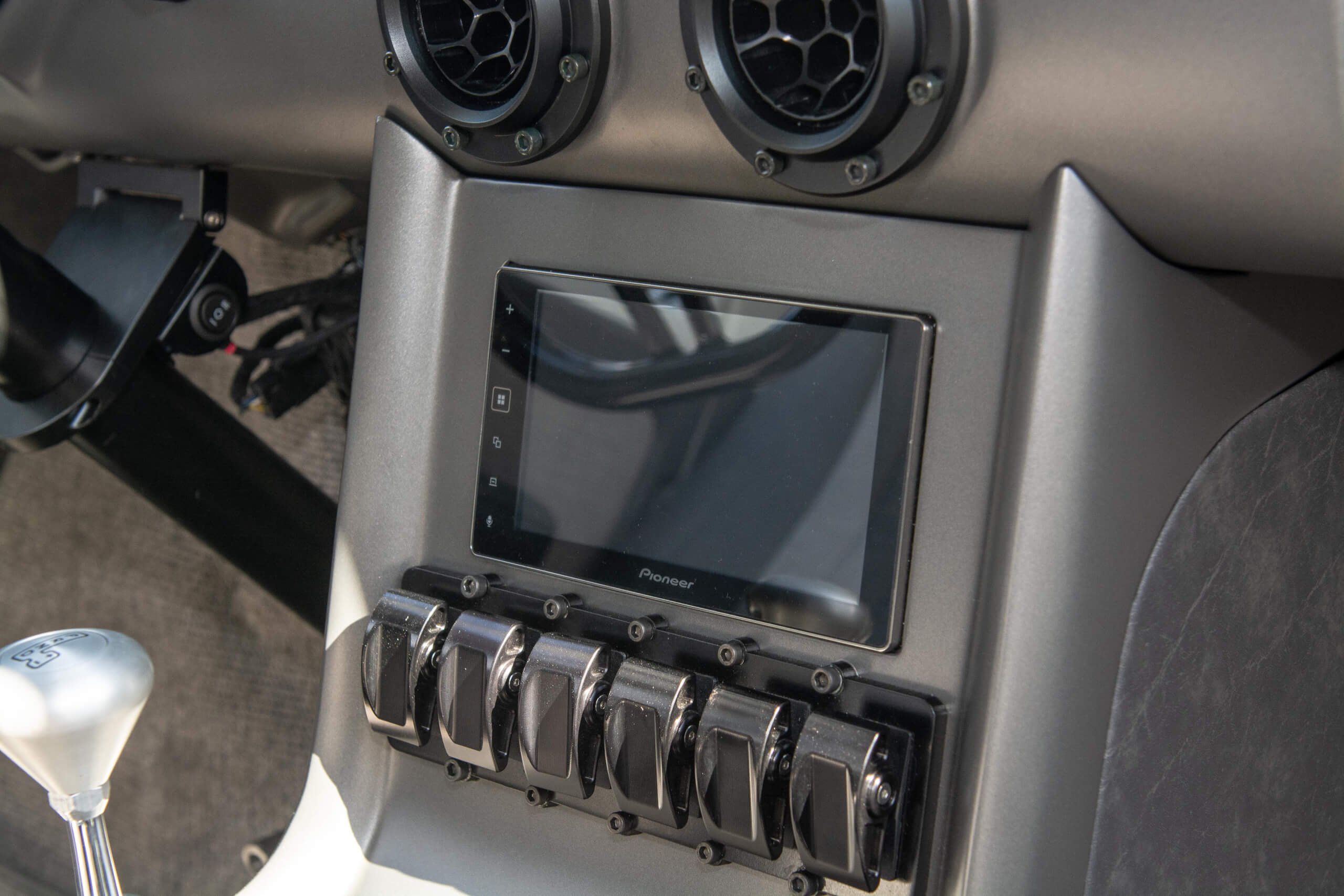 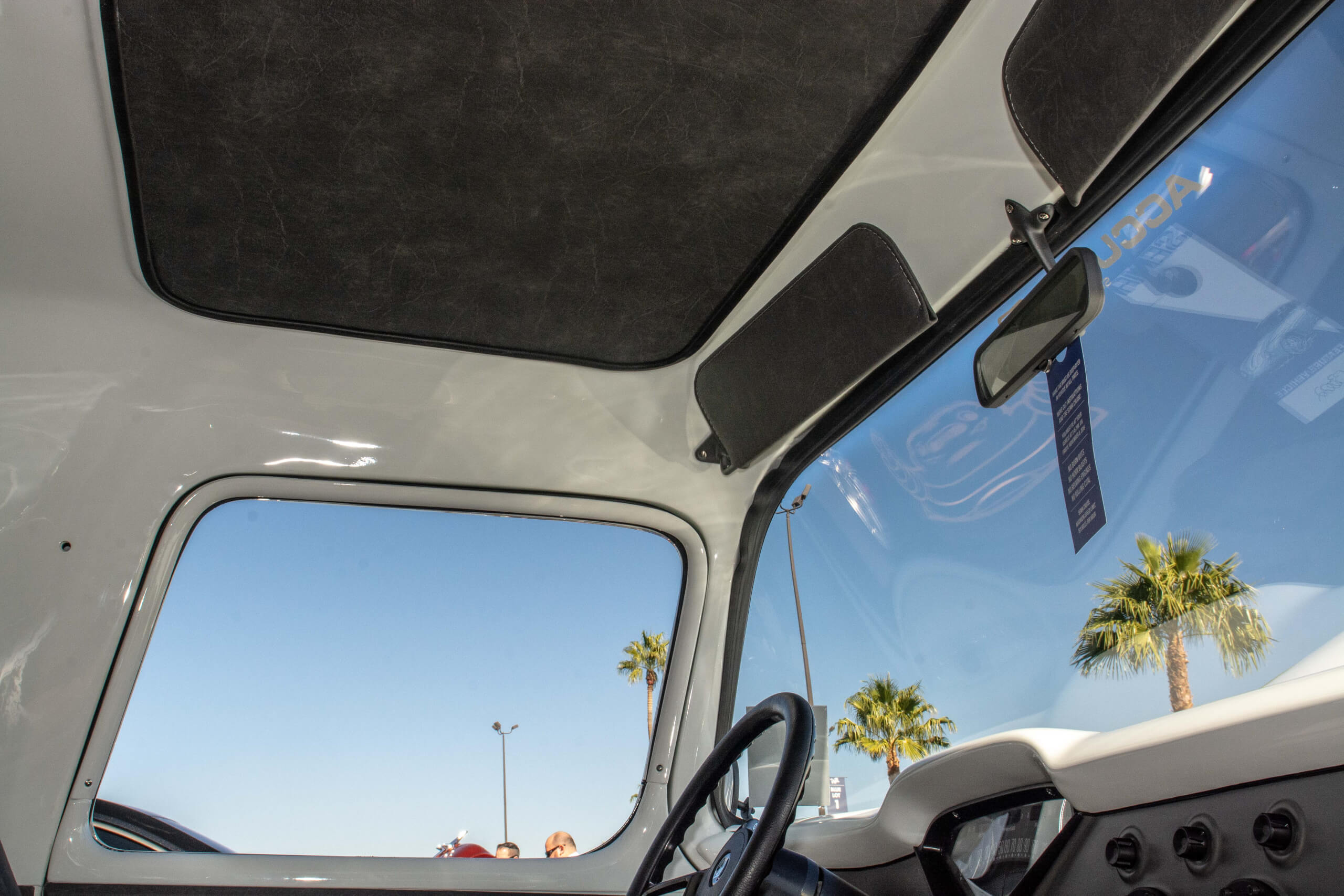 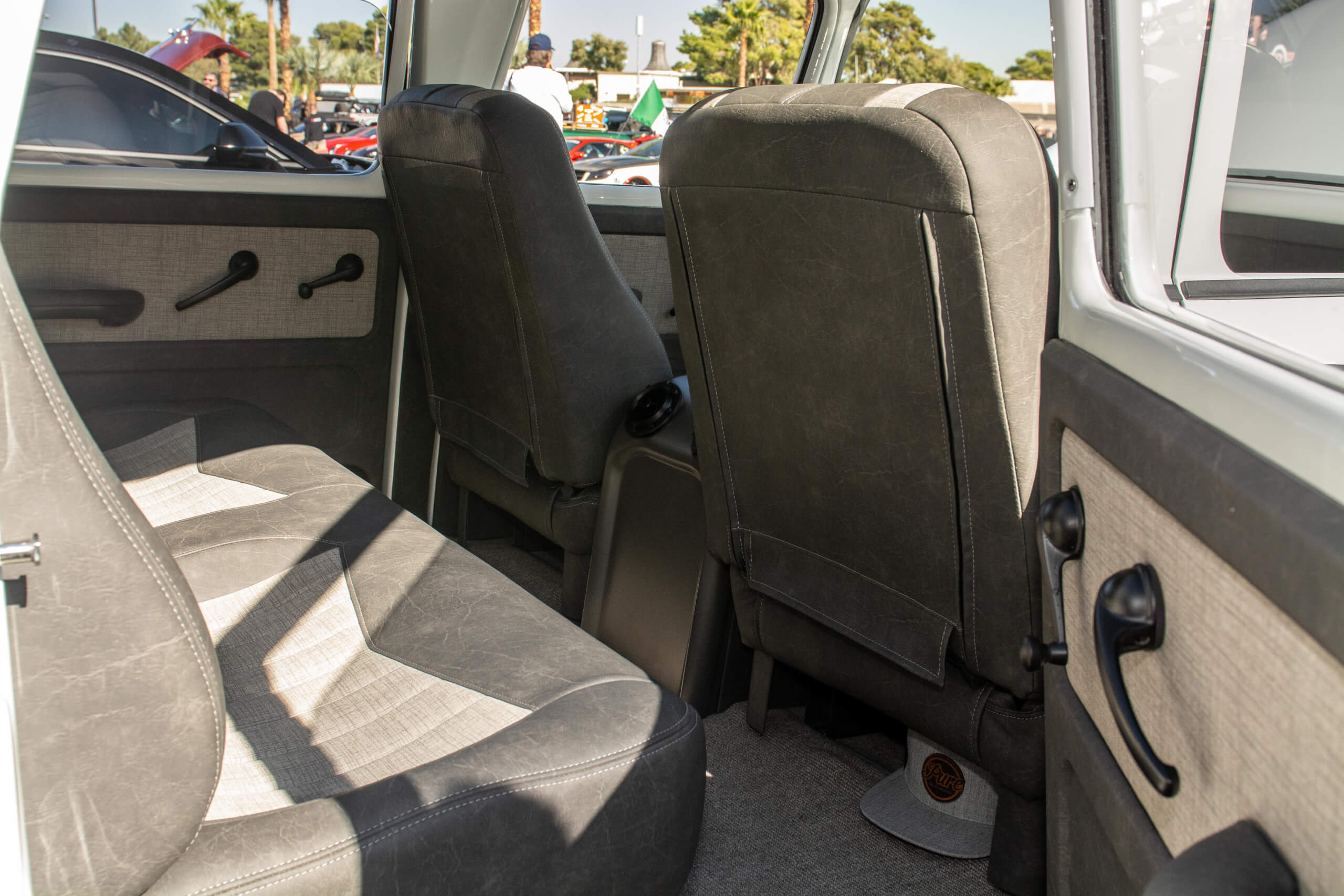 With the frantic rush to make it in time for the vehicle’s debut at this year’s SEMA show, the father-son duo had no time for test miles. They’re both hoping, and planning, to change that in the very near future with a full bevy of events and appearances. “Dan loves to create and has always had a talent for it,’ said Guy. “We’re so proud of how it came out and can’t wait to make many more memories down the road.”