Cars and trucks have a way of bringing folks together and this too-cool classic COE and Chevy combo is a perfect example of it. The people behind it are hail from Carencro, Louisiana, a few miles north of Lafayette, Louisiana and coming together at an event like the 2019 SEMA Show is a regular occurrence. “Back home, we’re always together,’ explains Michelle Broussard, who displayed her 1954 Chevy sedan. “If we’re not at a car show or cruising, we’re cajun cooking and enjoying life together.”

Her ride was paired with another rolling stunner, a 1941 Ford ramp truck. Both vehicles, like a good gumbo, mix lots of ingredients to achieve the final results. Loads of creativity, passion, heart, and soul all went into both builds but the tasty final product is more than satisfying.

For Chris Ortego, creating a COE (cab over engine) truck had been ‘on his list’ for quite some time. Cody Stoute, of Popeye’s Rod Shop, had already built him a custom 1964 Buick LeSabre and knowing he wanted the young and talented craftsman to handle this new creation, it was just a matter of acquiring the needed parts.

Thankfully, he didn’t have to look far. Cody already had a 1941 Ford COE cab and fenders sitting shoved forlorn in a back corner of his shop. Using that as the basis, the rest of the truck took shape.

The project kicked off in 2017 with the intention of creating one radical ramp truck. The chassis was hand-formed, along with the entire rear of the vehicle carrier. Cody extended the rear fenders (once belonging to a 1940 Chevy truck) and made the running boards from scratch. Under the Ford’s snub nose sits a Cummins 5.9L diesel engine that was found in a junked school bus. Other touches include front bumpers from a 1955 Chevy pickup, lights off a 1958 Chevy Impala and an air suspension.

No Go For Green

When it came to the truck’s exterior color, Chris was originally thinking teal green. More thought had him changing his mind, settling on a classy two-tone. The top half is two different House of Kolor’s candies mixed together. The lower section is painted in a late-model Hyundai grey. Shawn’s Autobody, also in Carencro, handled the bodywork and paint.

The whole project was finished just one day before the start of the 2019 SEMA show. Chris couldn’t be happier with the rig’s results. “It’s just what I had in mind,’ gushes the enthusiast, who’s only wheel time was pulling into the convention center. “I can’t wait to get it out and drive to even more shows.”

This Hauling Combo Hails From A Close Family of Louisiana Rodders

Miss June’s husband was a farmer who owned a sugar cane plantation just outside of Broeaux Bridge, LA. Sometime in the early 1960s, the longtime Louisiana resident purchased one of their worker’s worn out wheels, a used 1954 Chevy 210 sedan. She paid him $100 and for the next several years, she daily drove the classic, racking up miles and lots of wear as she crisscrossed the dirt roads of the backwood bayous.

Giving A Leg Up

Sometime in the mid-1970s, the clutch went out causing her to park it in her husband’s work shed. Stored underneath a loft, grandchildren often climbed on the trunk, then the roof, to reach the building’s upper level. Dents in the bodywork attested to that kind of playful activity. Over time, dust and dirt accumulated, along with machinery tools, old furniture and storage items. 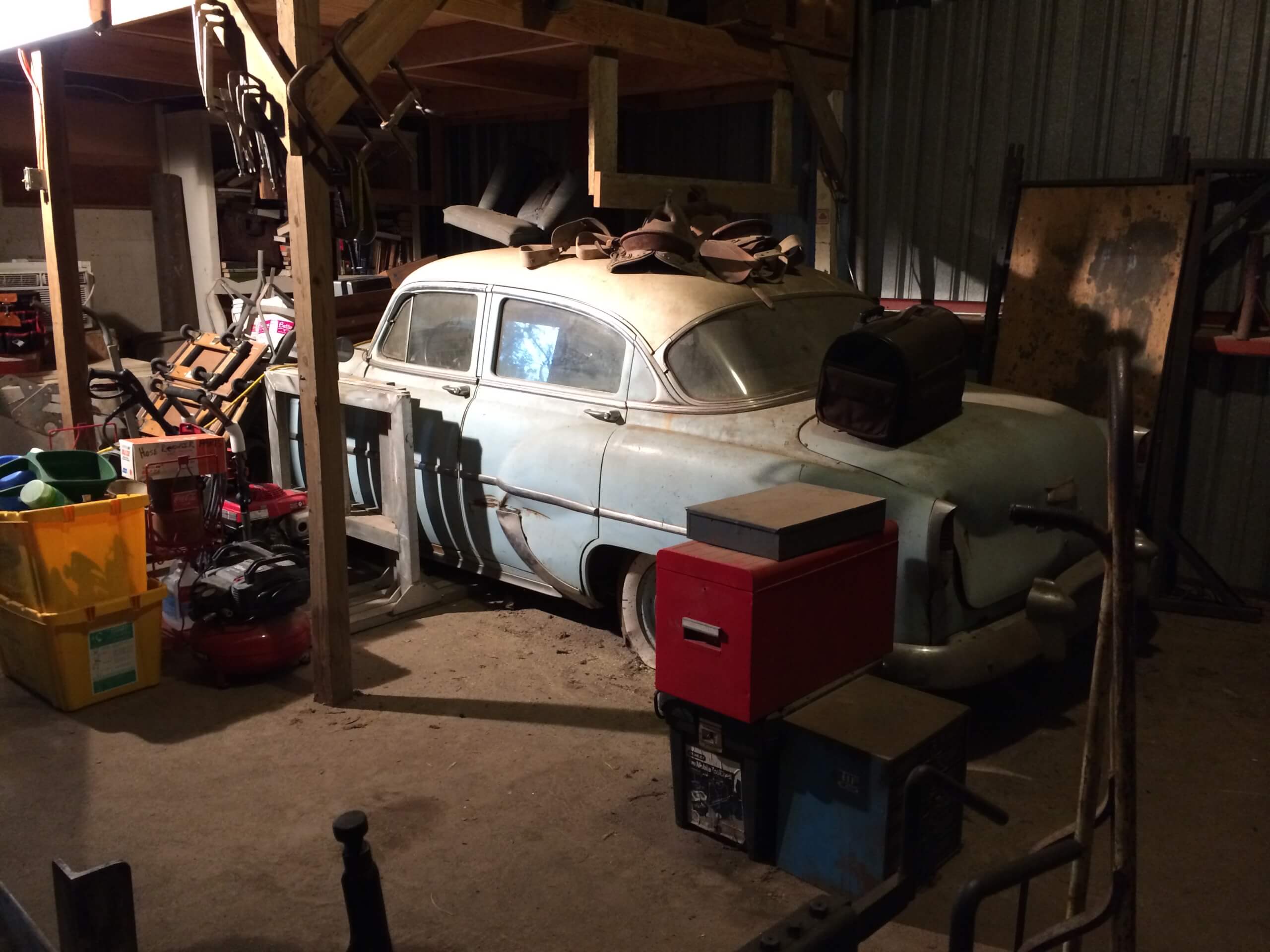 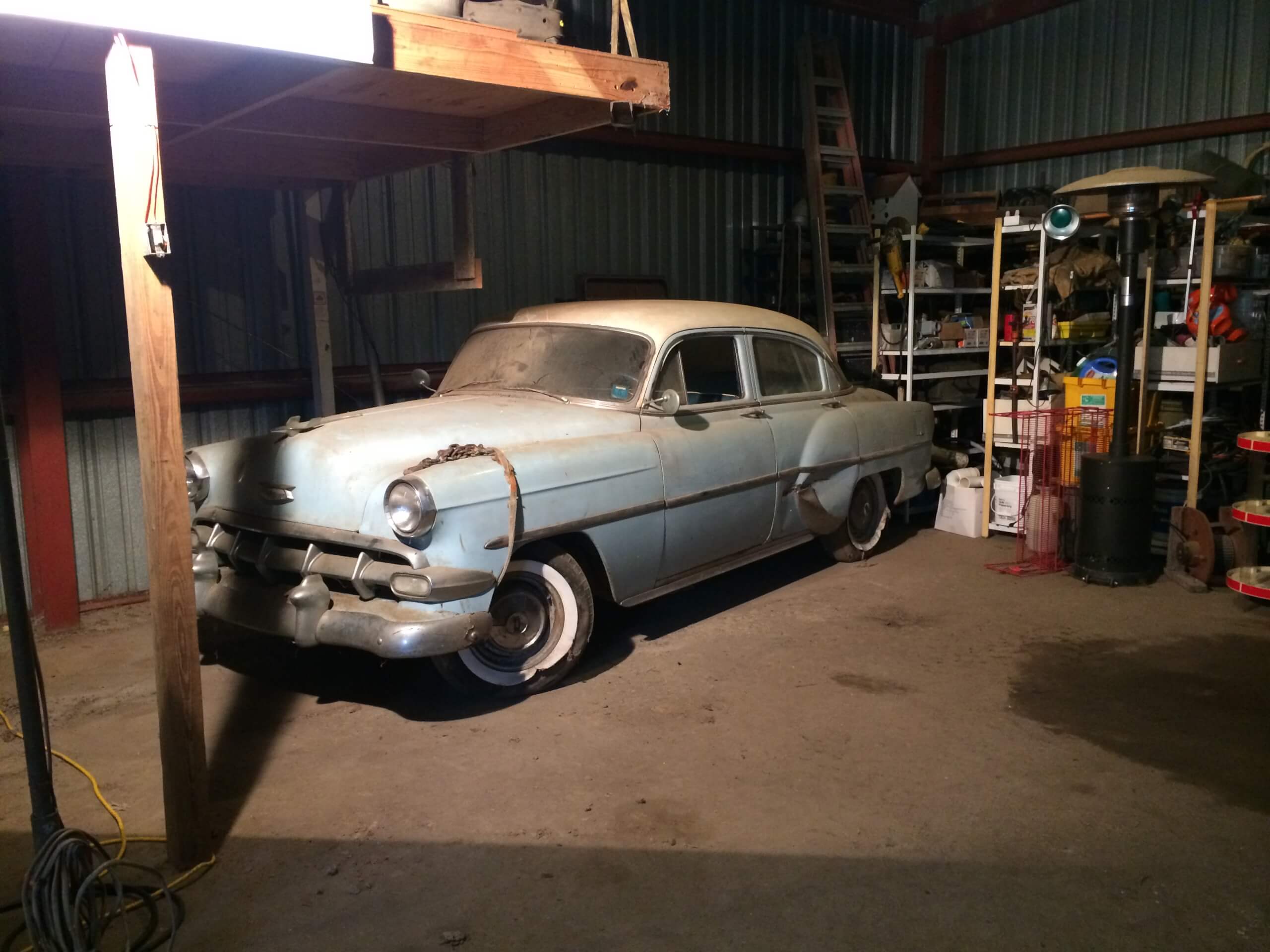 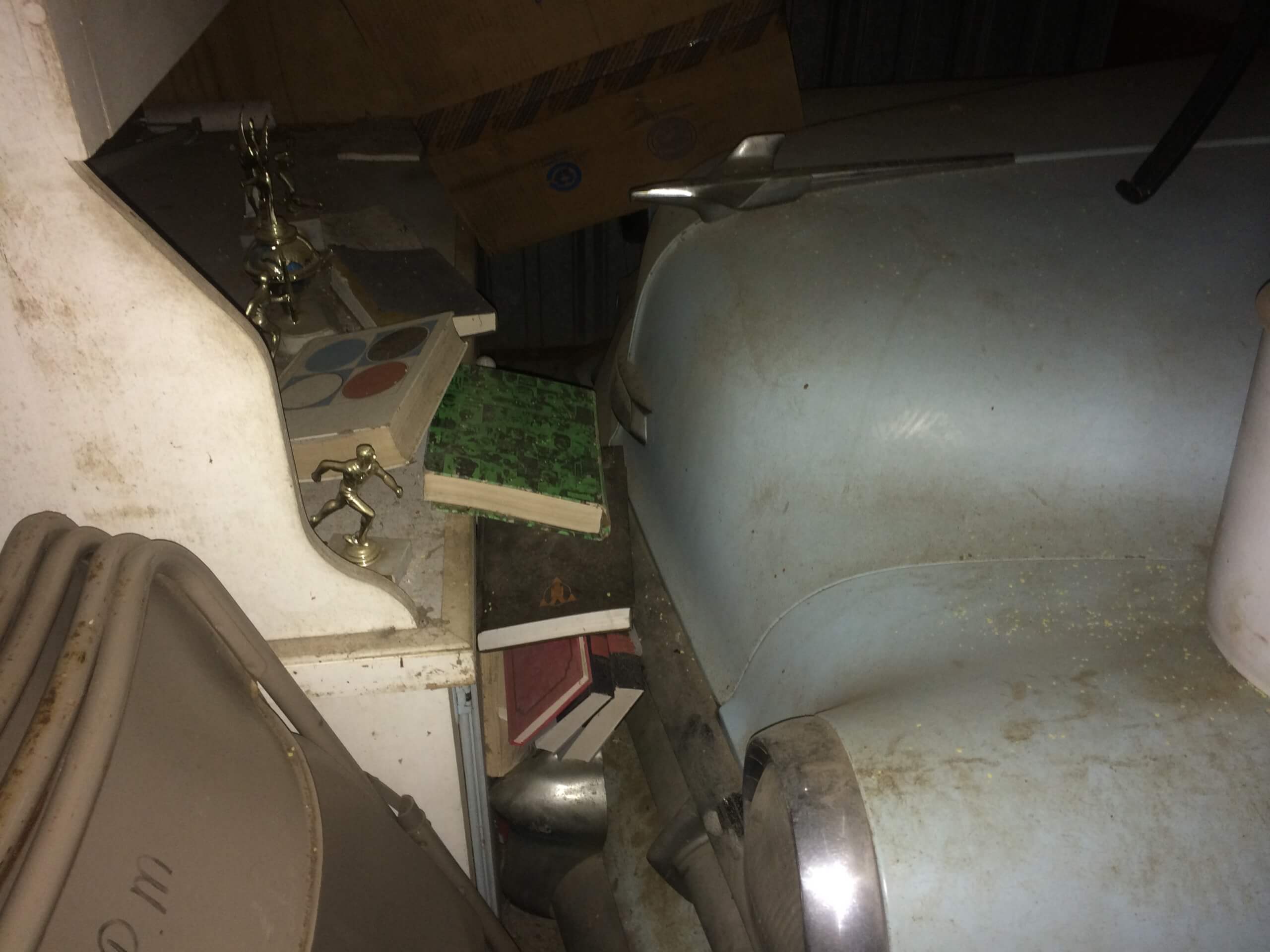 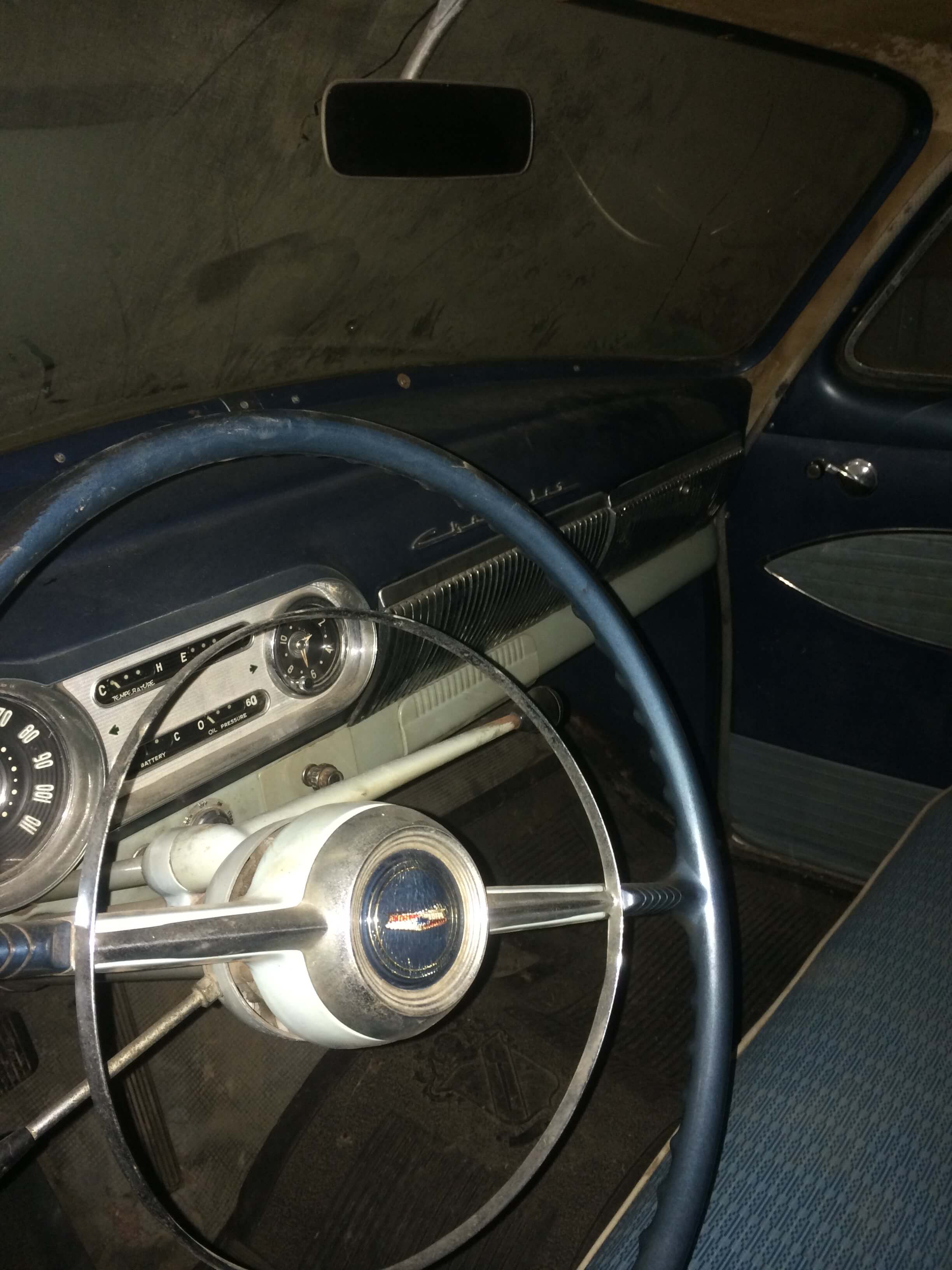 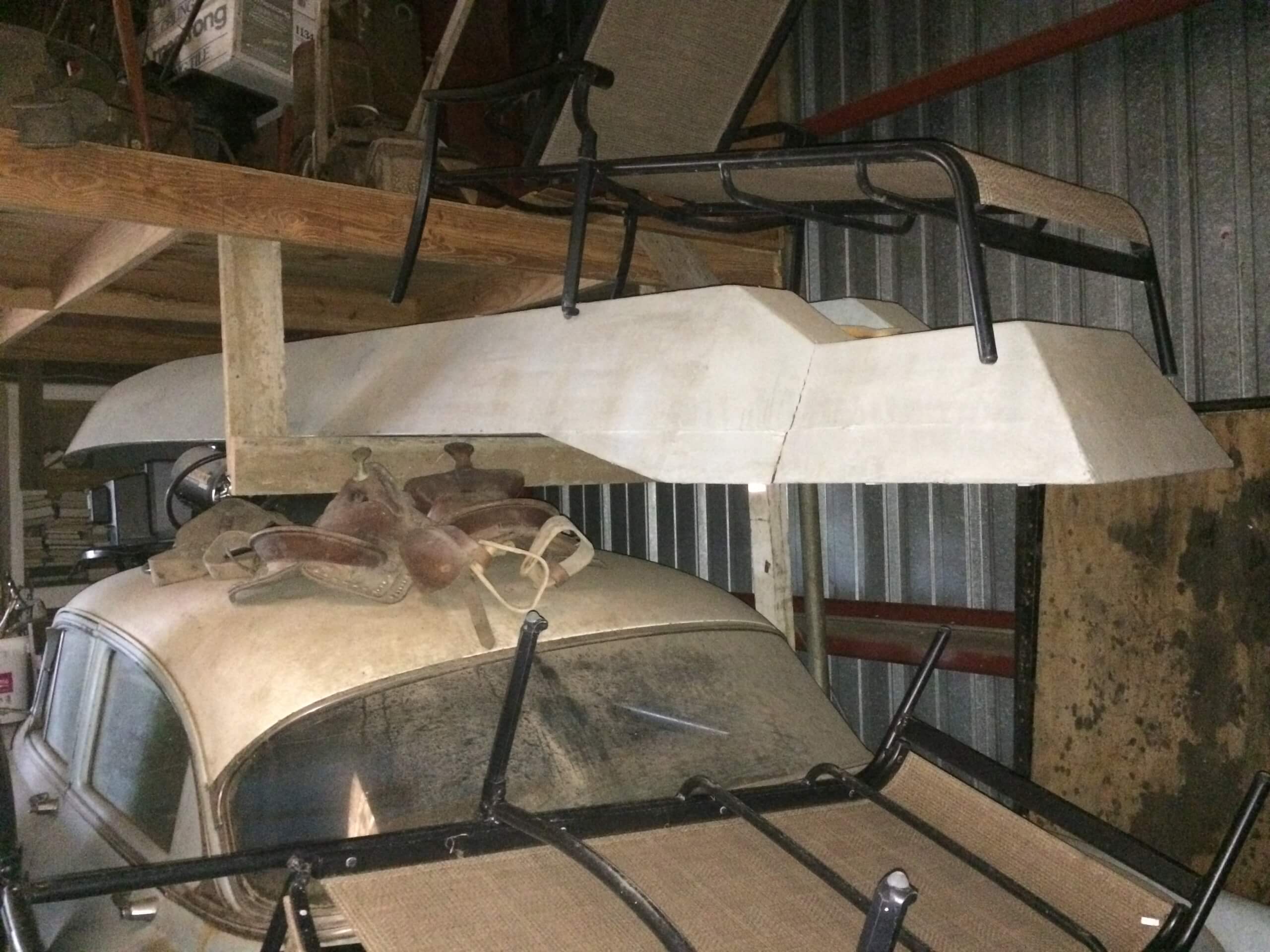 Gone But Not Forgotten

Finally, a grandson talked Miss June into selling her vehicle. The classic was unearthed from its cluttered crypt and rolled outside. There, it caught the eye of Michelle and David Broussard, who live just down the road from Miss June. “We were looking for a solid car with lots of comfort,’ explains Michelle. She had been looking for a sedan that would have room for her whole family to tag along on motoring outings. Despite their proximity, they never knew of Miss June’s ride. While the task of getting it roadworthy was daunting, David is no stranger to working with his hands. “We grew up fixing everything we had,’ said the craftsman. “Michelle and I loved the idea of fixing up the old Chevy.”

While they liked what they saw before they could approach Miss June about the car, one day it just disappeared. “Come to find out, it was sold to another area enthusiast,’ explains Michelle. Over time, they made contact with the new owner, who happily passed it on to them in 2017.

After getting it home, the couple set about a full and custom overhaul. The stock frame was retained but the front and rear sections were modified to accept an air ride suspension. Underhood, a modern LS1 V8 was installed, paired to an automatic transmission. Detroit Wheels were installed at each corner, covering stock brakes.

Inside the cabin, the redo all started with Michelle’s love of the outdoors. “Dad was a sugar cane farmer, too, and I learned to love making things grow,’ explains the enthusiast. A trip to the local fabric store had her loving a floral pattern, which was used as the foundation for the cabin’s color scheme. “The flowers always remind me of his beautiful yard, which he always took pride in maintaining well,’ recalls Michelle.

Those aren’t the only family connections the car has brought about. “As the car was coming together, we drove it to show Mom,’ said Michelle, whose parents were married in 1950. “Right away, mom said she had one just like it.”

While Michelle’s dad, Howard, passed away in 2014, she wanted to include touches in honor of his legacy. In the chassis, she included his name’s first initial, in the distinct cursive that he used when signing his name.

The Broussards wanted to retain the stock and quaint two-tone exterior color combo but gave it a modern twist. The lower half is painted in a 2013 VW Demin Blue paint while the upper section is painted in a 2007 Lincoln Cream Brulee color.

Returning to Its Roots

The project came together the day before the SEMA show opened and while excitement is high in Vegas, the car-crazy couple can’t wait to return home. “We haven’t shown Miss June the car and can’t wait to see her reaction,’ gushes Michelle.

Chris, Cody and the Brousards all shared lots of laughs while displaying the spectacular set up at this year’s SEMA show but even more good times will be coming in the new year. The pair have active plans to be cruising even more throughout Louisiana. Chris is wanting to load up the Ford with his LeSabre while the Broussards will be making it back to see Miss June to show her the revamped ride. For this car-loving crew, the road of life is all about sharing the miles and making lots of happy memories.

This Hauling Combo Hails From A Close Family of Louisiana Rodders