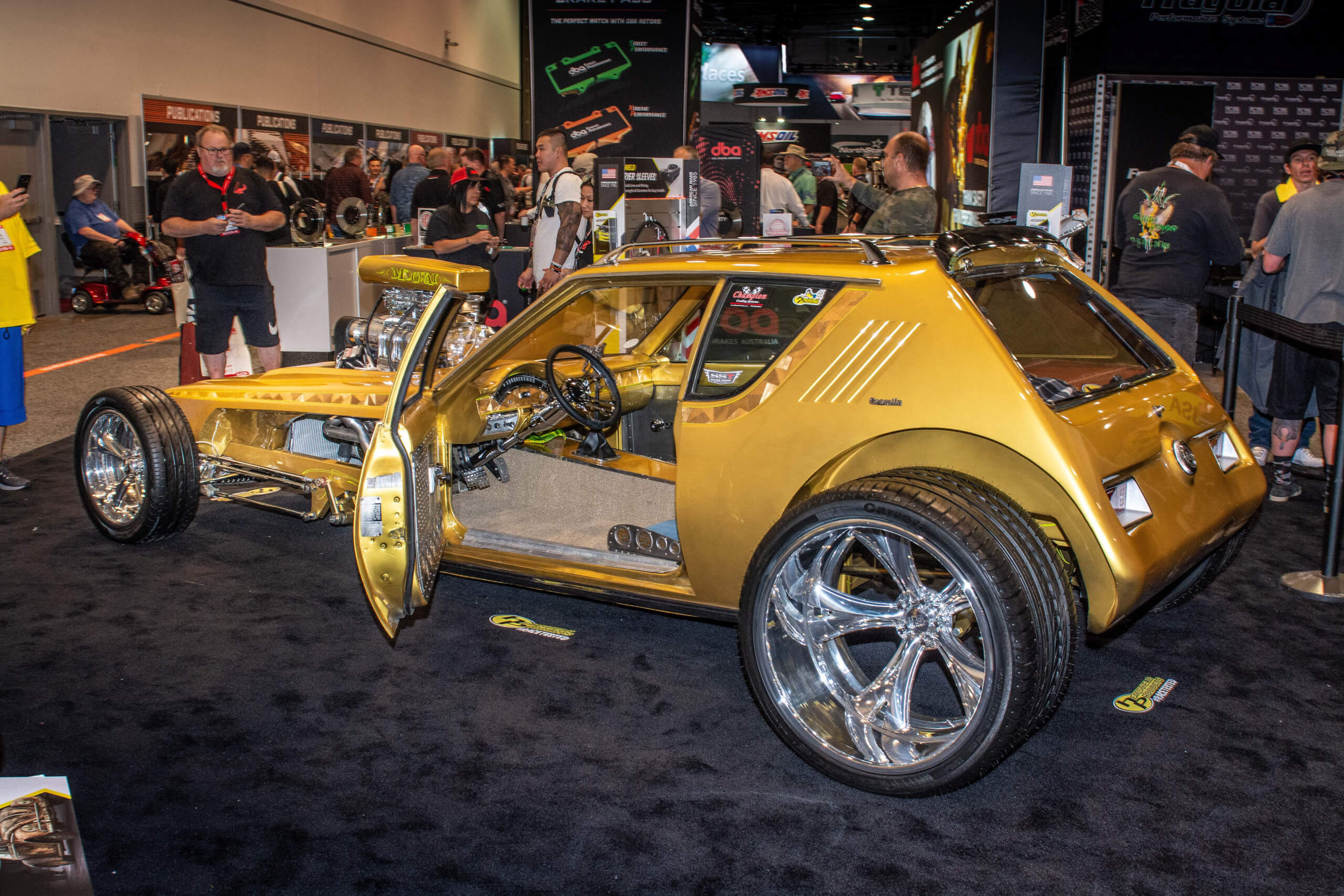 When it came to a theme in building his new ride, Jake Griffin looked to one of the masters of cinema: Stephen Spielberg. No great whites, out of control dinos or treasure-hunting professors would do but rather a sometimes forgotten 1984 film named ‘Gremlins’. It’s a most fitting of names since Jake did indeed select to build an often-overlooked classic, a 1975 AMC Gremlin. “You never see them at the SEMA show,’ explains the craftsman, who debuted the wild ride at this year’s event. “I wanted something completely original. The movie is pretty crazy and wild and that’s what this car is all about.” He christened the machine Mogwai, the movie’s name for the fictional creatures.

He started by finding a suitable foundation, purchasing the starter car from a seller in Omaha, Nebraska. “It was complete but rough and rusted out,’ recalls Jake. “It was always in cold weather, playing in the salt and mush.” The hatch was brought to the family’s shop, Griffin Design, in Valley Center, California, for a complete overhaul.

After seeing the final product, the task may appear daunting but not for Griffin, who’s a third-generation hot-rodder. “My grandfather was building cars, my dad has been building cars and now, I’m carrying on the family legacy,’ said Jake, who also received formal training from WyoTech trade school programs.

Getting the Gremlin to Go

Armed with years of learning and a focused determination, Jake set to work performing radical alterations. The frame was hand-built and lengthened two feet upfront. The rear axle and massive rear wheels were also relocated to the far rear edge of the vehicle. “I wanted this to have a Hot Wheels look to it,’ explains Jake. For power, he sourced a later-model Jeep 304ci V8 but boosted performance by adding an 871 blower. The SEMA show isn’t even over but Jake already has plans once he gets the car back home. “I want to dial in the motor,’ said Jake. “There’s more performance there that can be drawn out.” 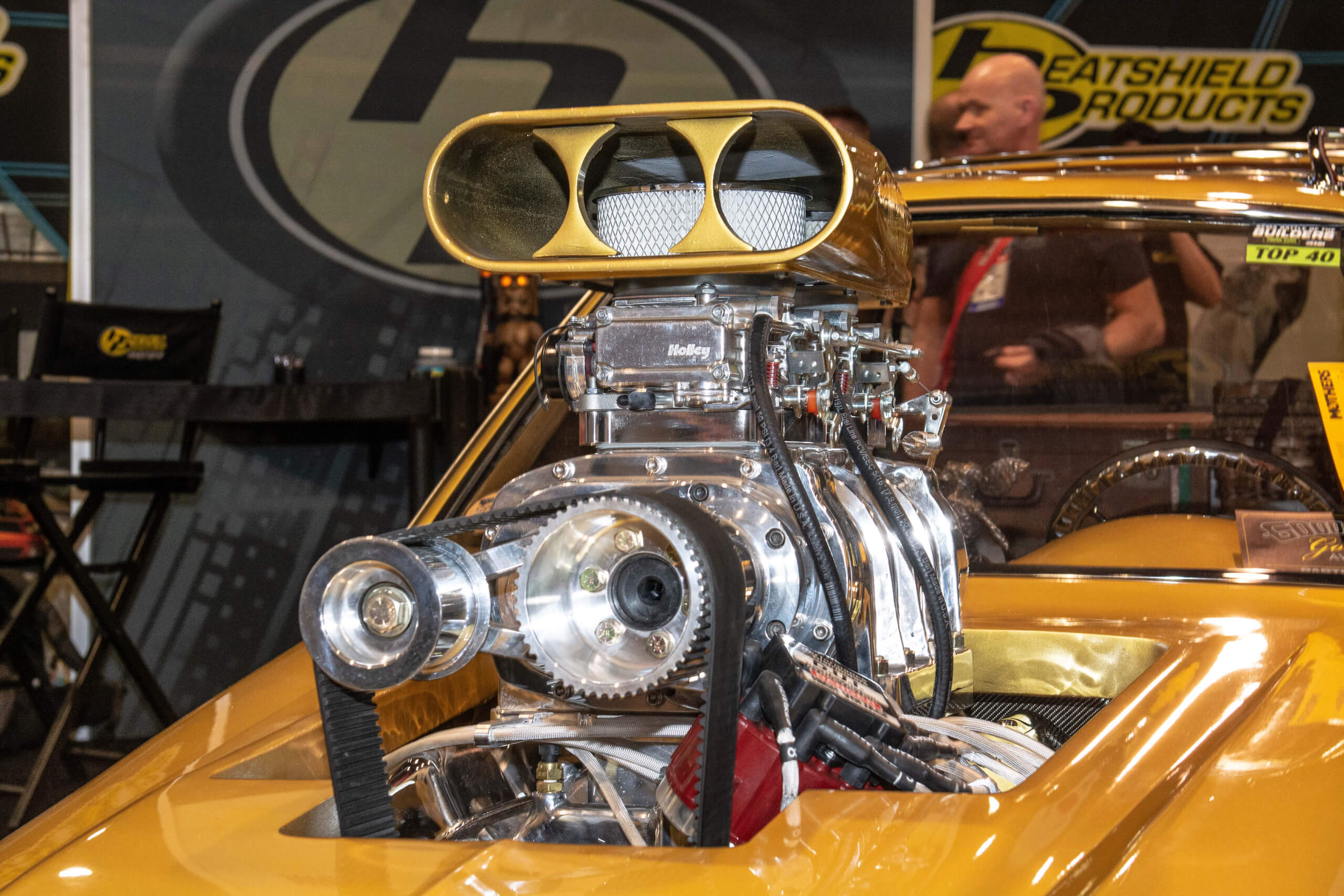 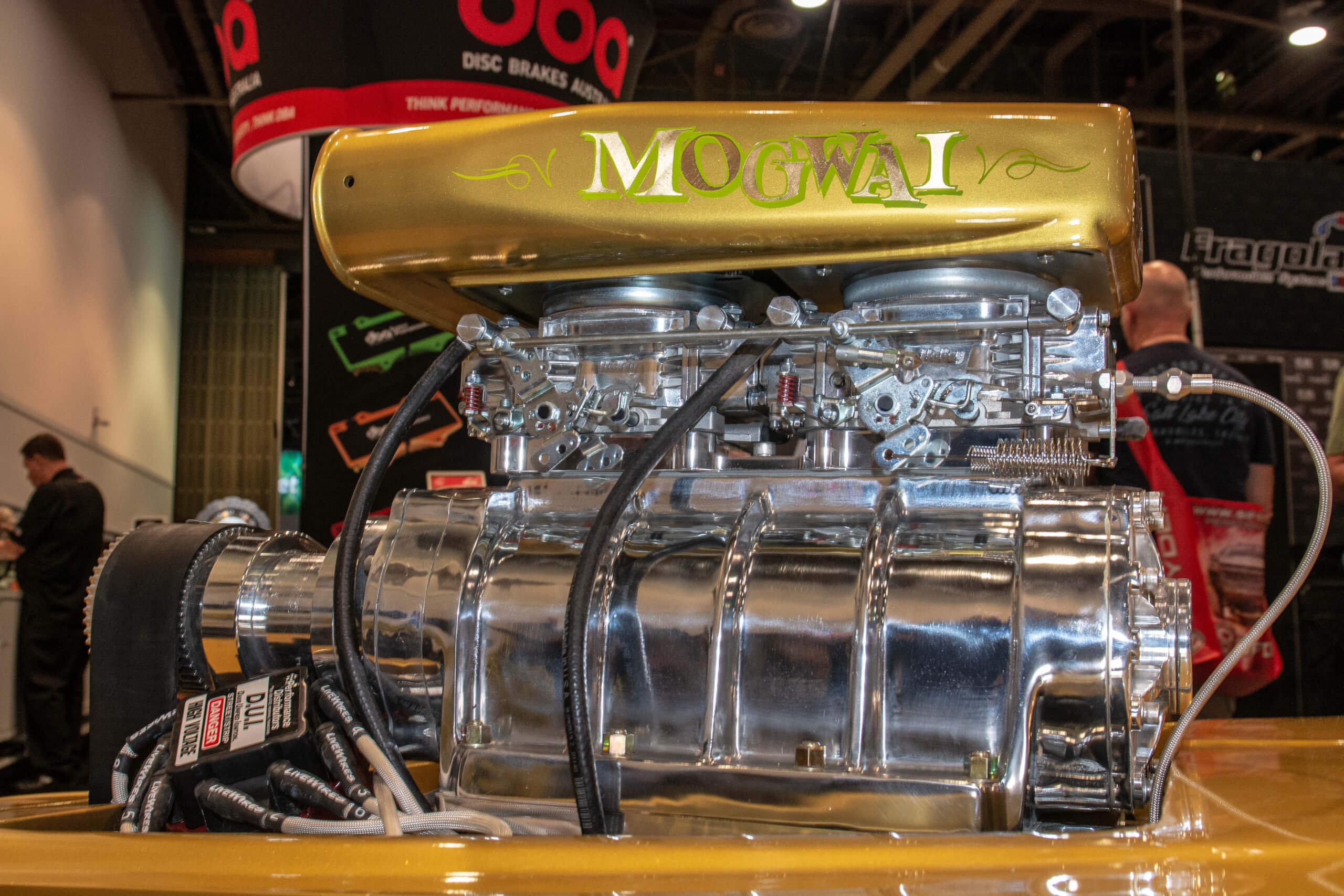 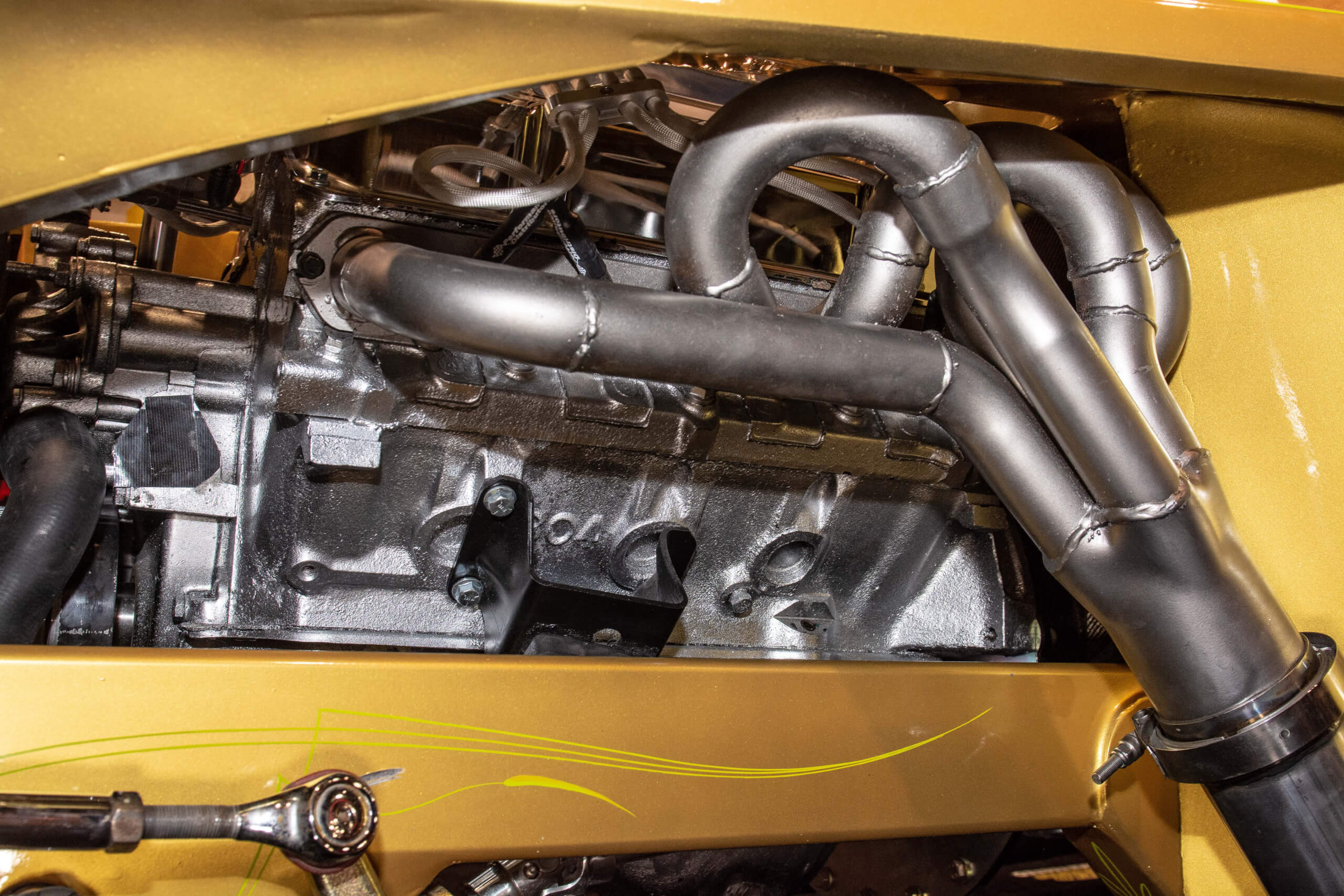 After getting the bodywork straight, Jake selected a brilliant gold paint to coat it in. “It’s one of the hardest colors for me to paint but I wanted to challenge myself,’ said Jake. “I went right at it and conquered it.” To achieve the shimmering effect, he relied on some family tips and tricks, including using two coats of black basecoat, covered in seven coats of gold paint, followed by six coats of clear. “That’s just how my grandpa taught me to do it,’ gushes Jake, who also added the gold leafing. Mike Donnor finished off the look, adding custom pinstriping to the entire vehicle.

Inside, the cabin was given bomber seats, covered in genuine Levi upholstery. The option was available by AMC in 1973 and Jake wanted to recreate the look. To achieve it, he purchased several pairs of the iconic jeans, cut them up, and covered the seats and roof upholstery. He even made sure to have the brand’s red tag visible on the seats at the shoulder line. Other touches include a hand-built bronze gremlin shift knob and a trunk full of luggage. Not only do these pieces cover the fuel cell but also harken to the film as suitcases were how the gremlins moved about. 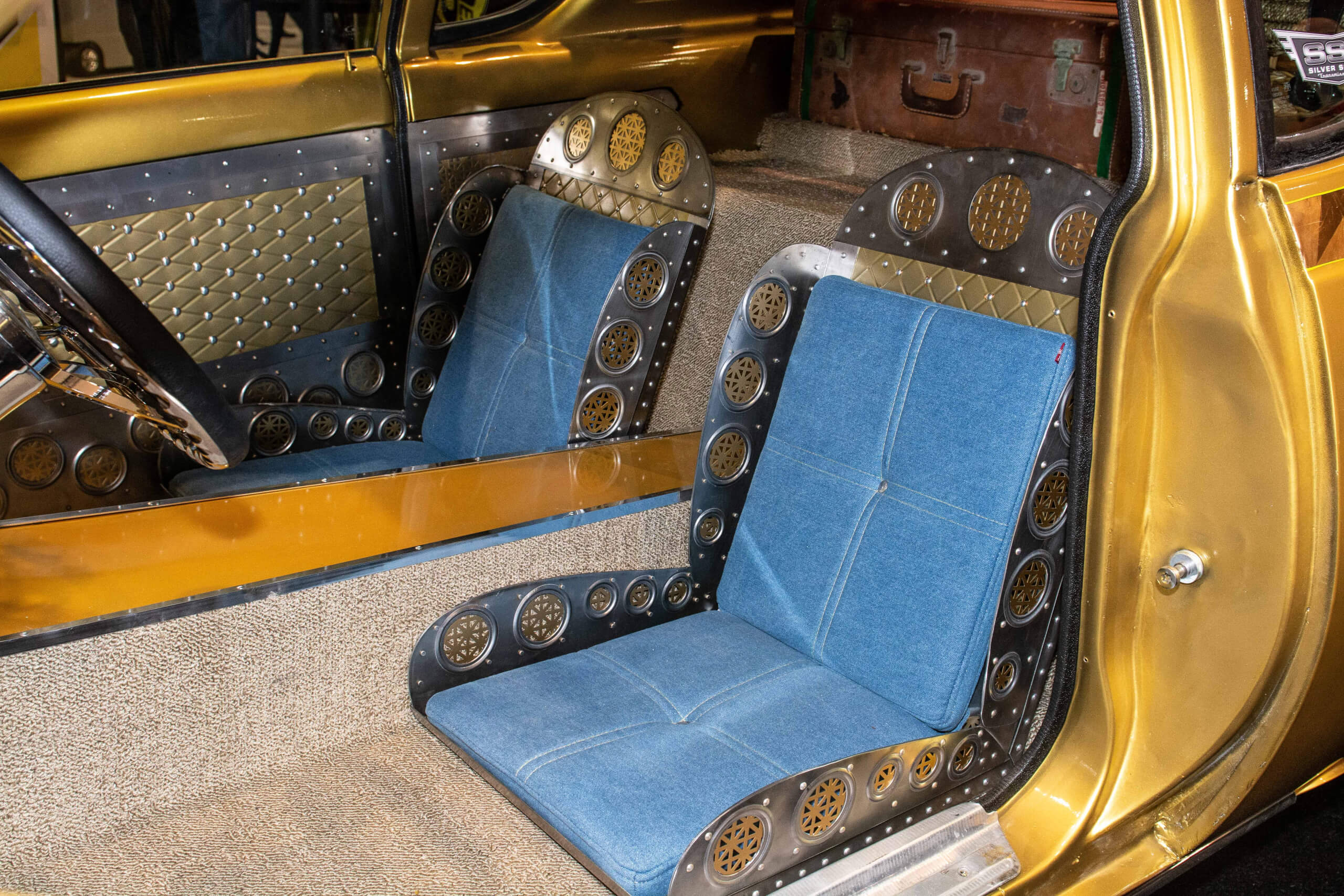 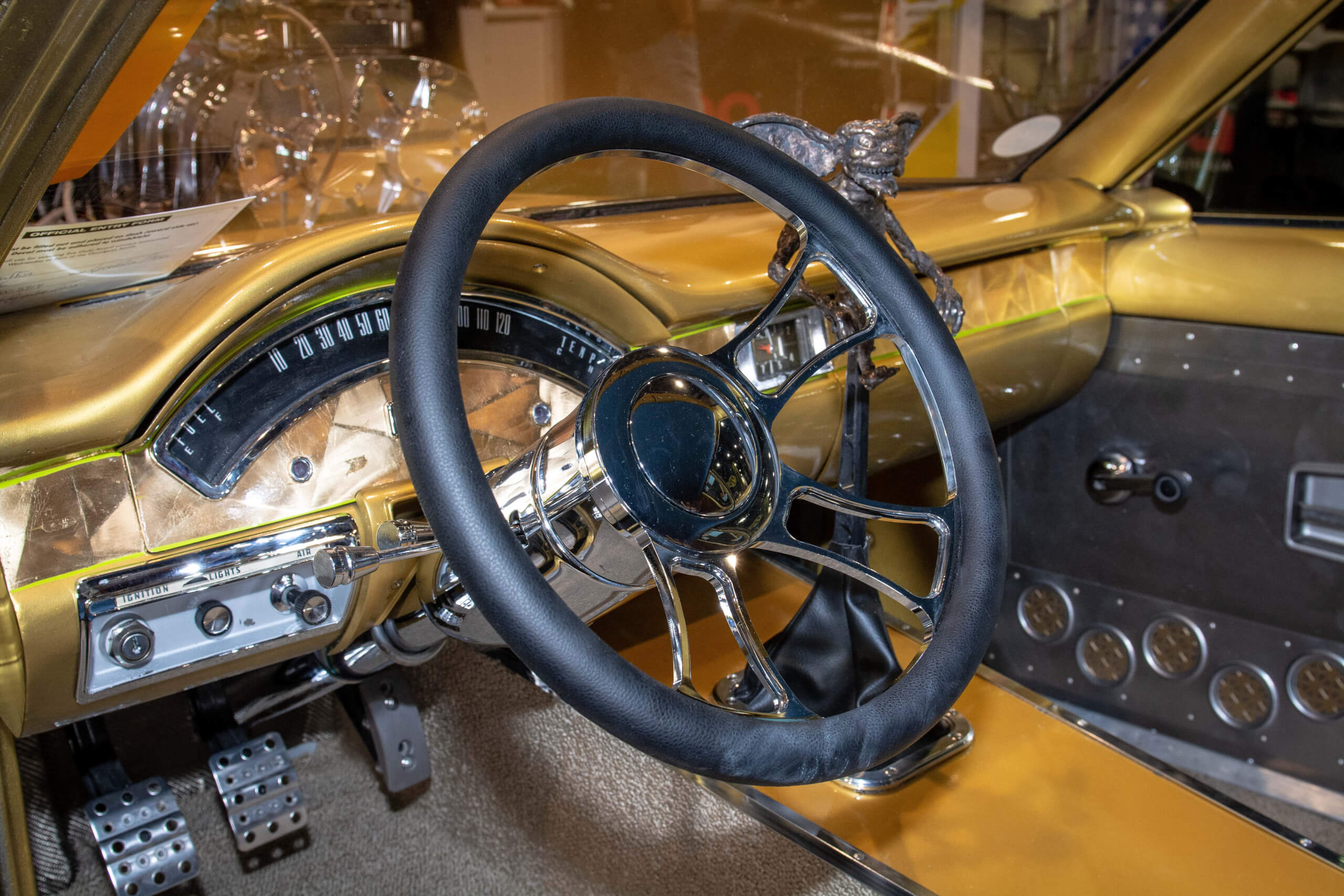 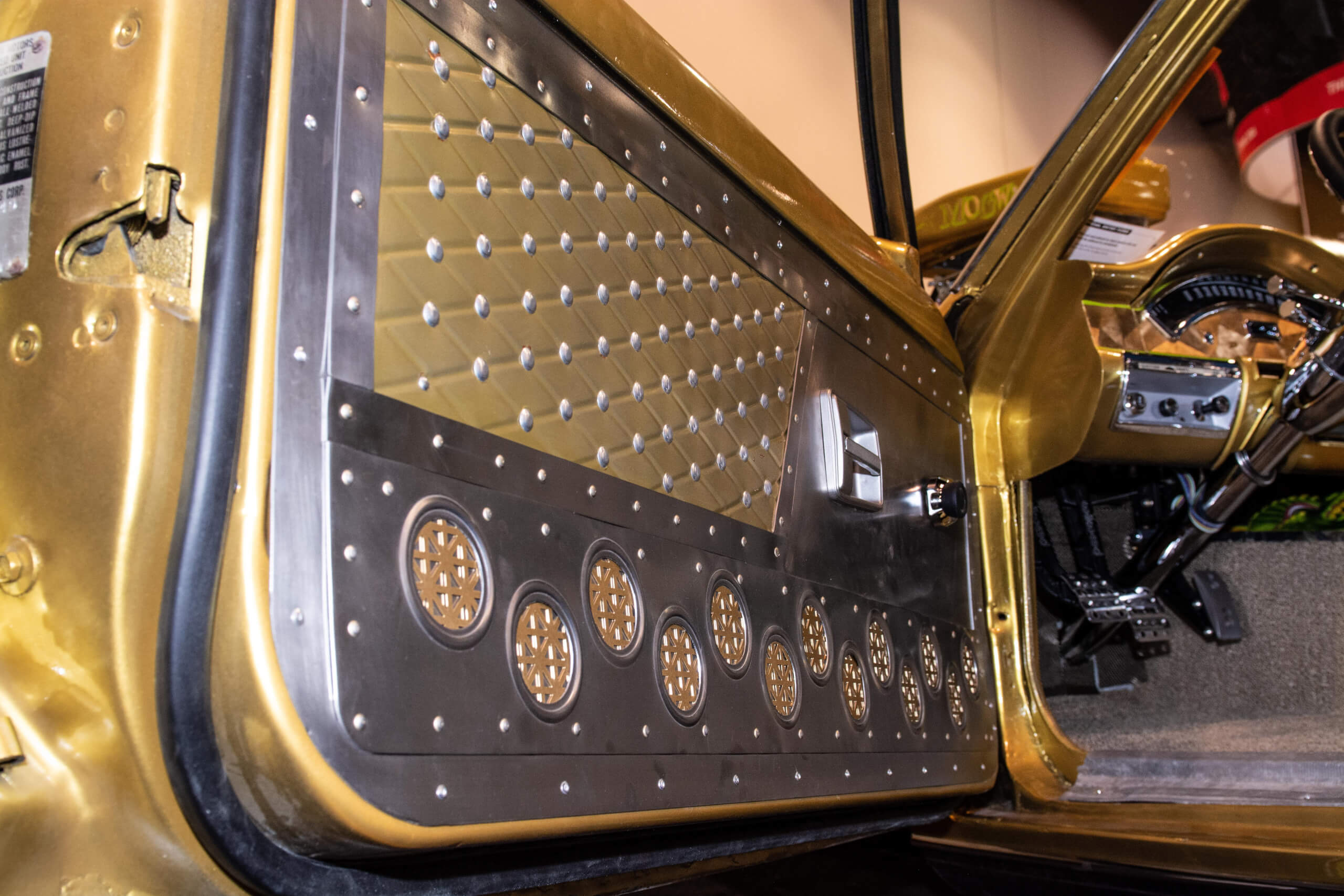 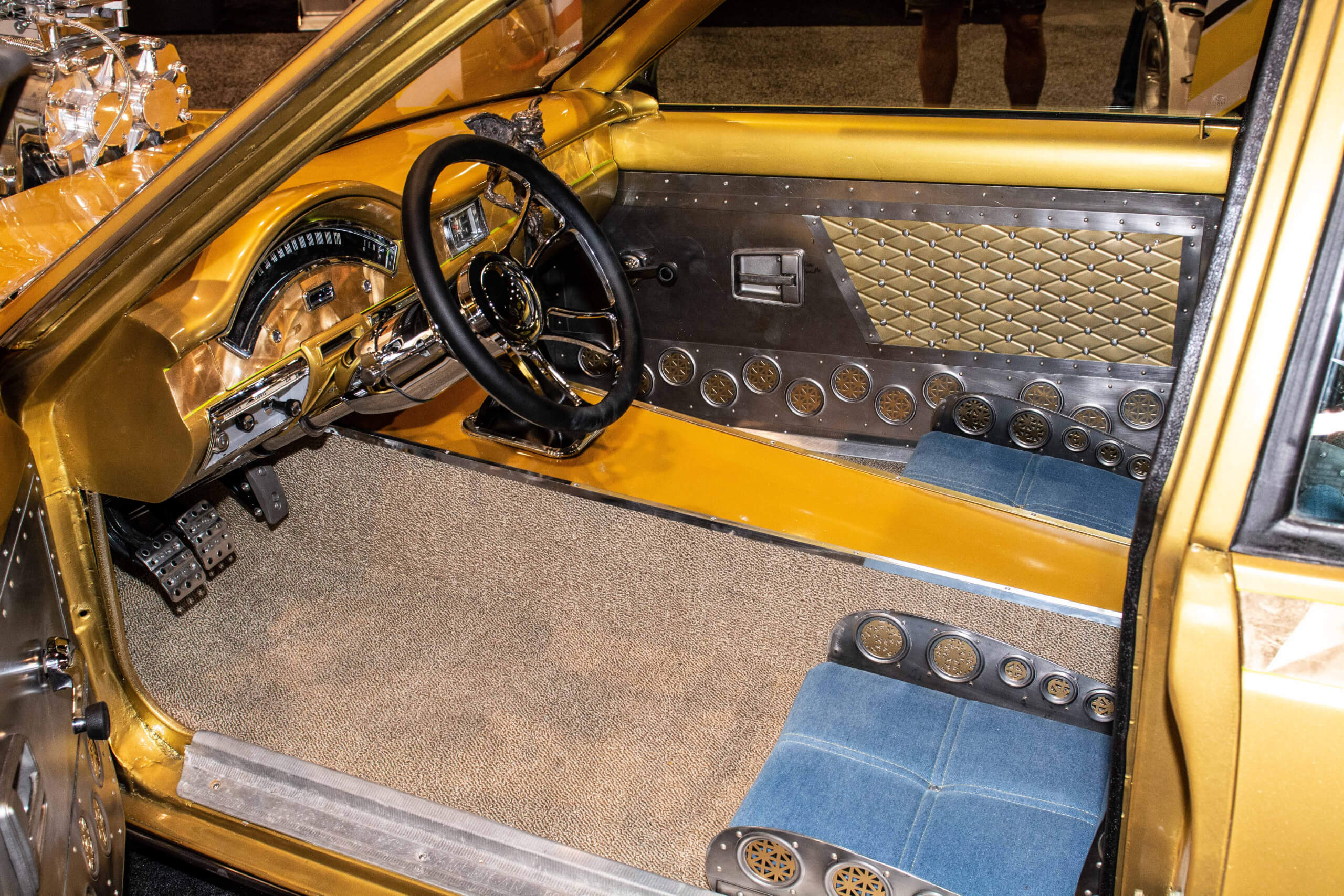 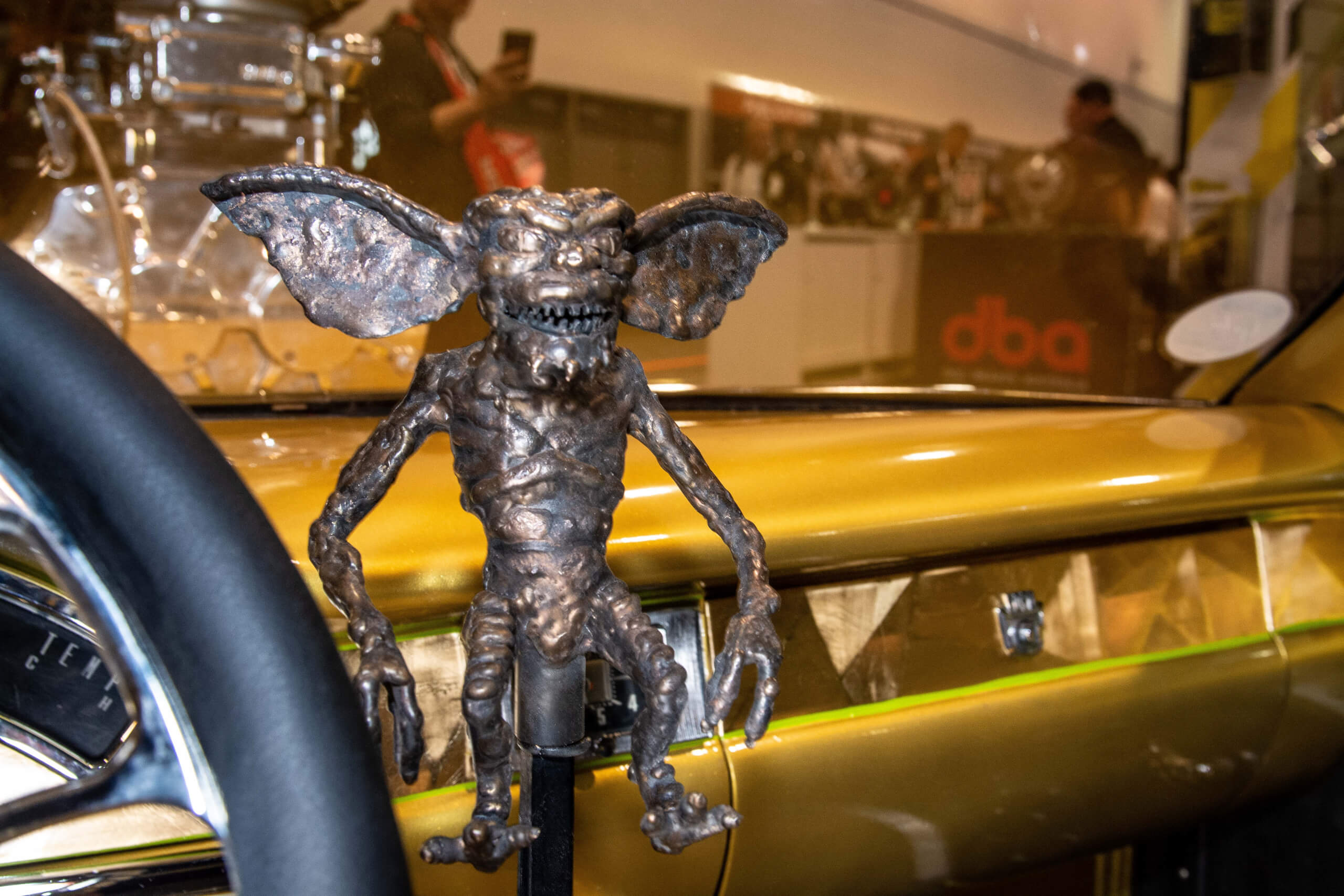 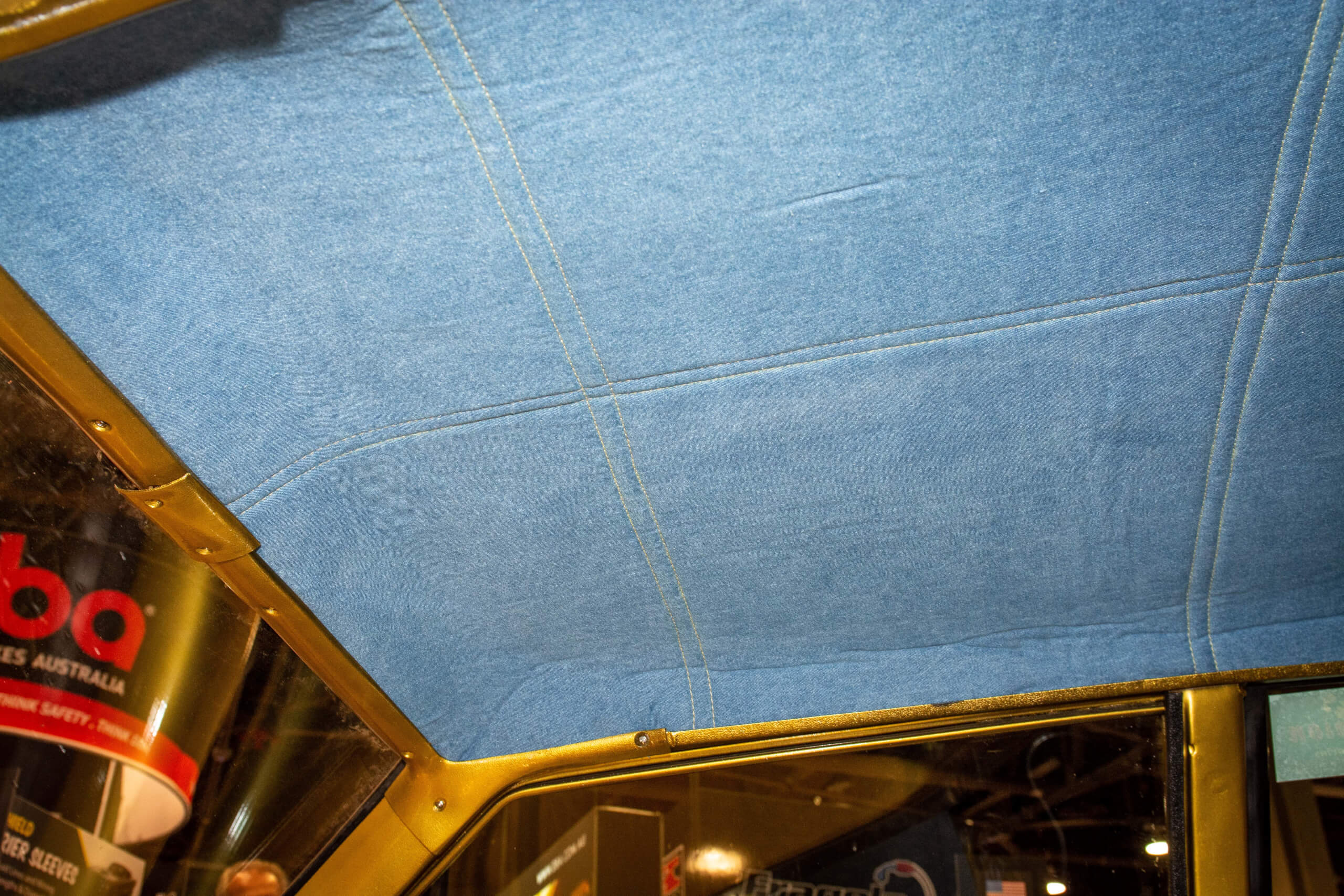 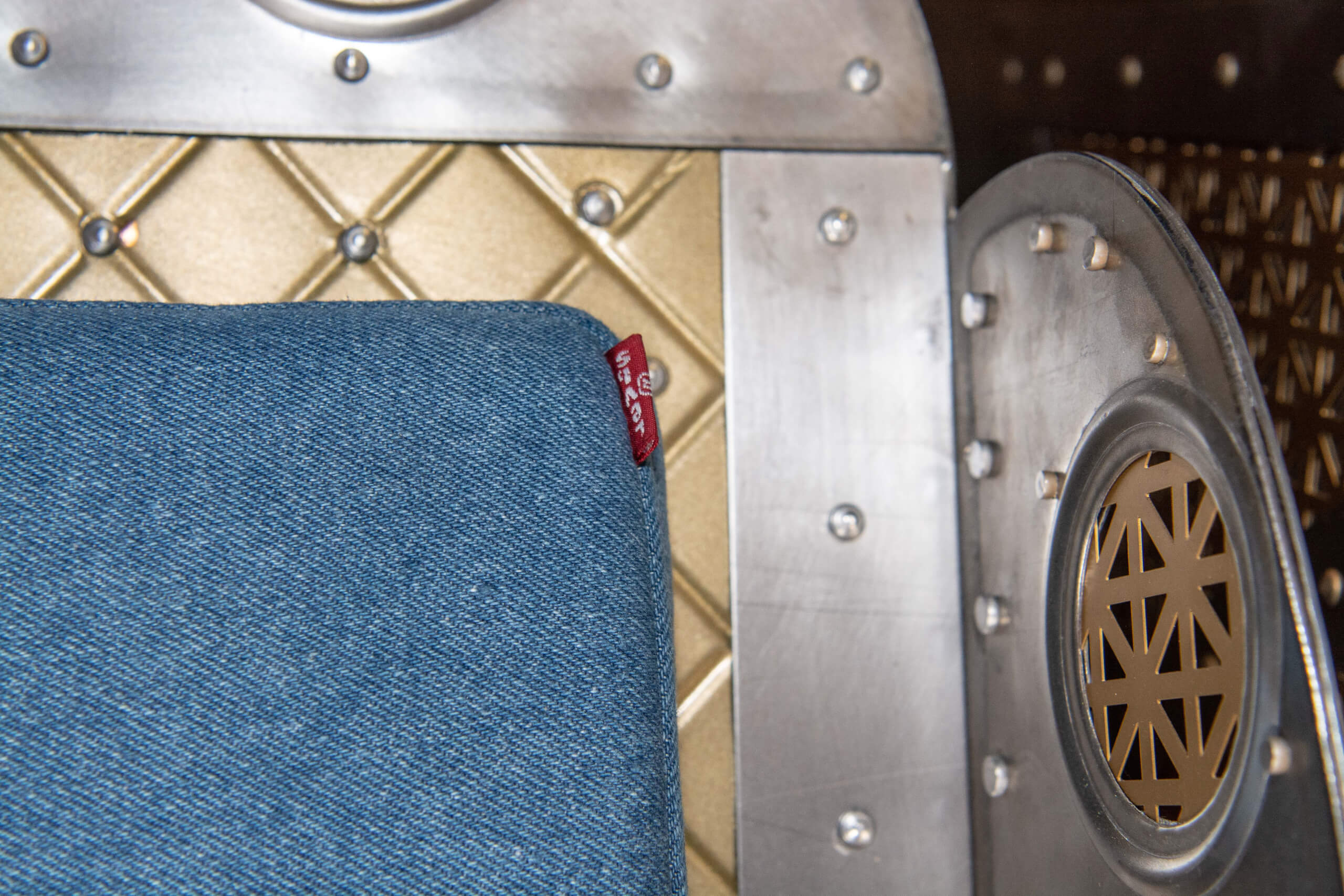 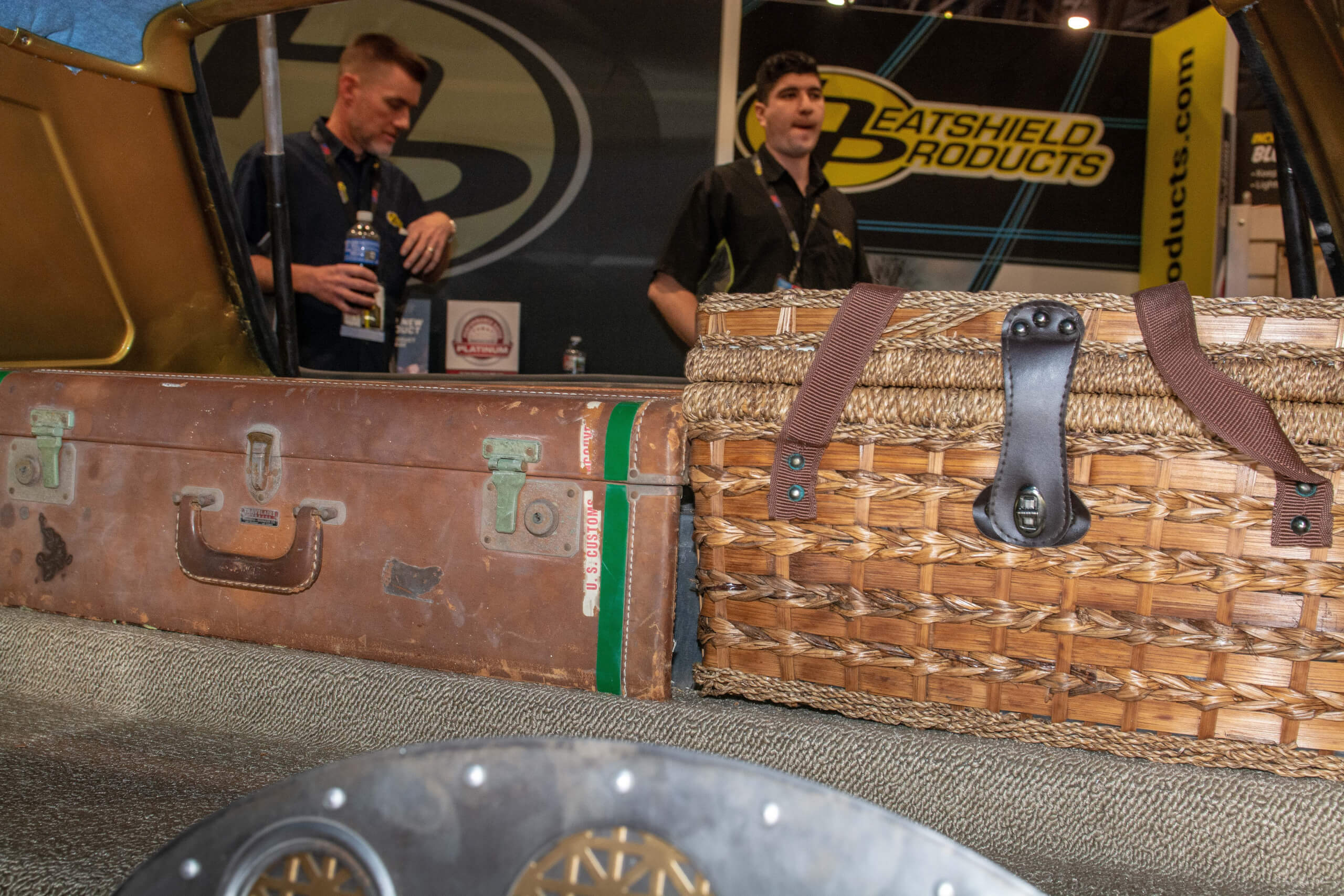 The project was finished just last Saturday and rolled into the Las Vegas convention center later that evening. “When it came to my career, I wanted to work with my hands,’ explains Jake. “It’s exhausting sometimes but that’s the style of life I chose. To have an idea in your mind and see it complete and on display is so rewarding. It seems hard but that’s the only way to succeed – to push yourself.”

That kind of can-do spirit isn’t going unnoticed. The vehicle, displayed in the Heatshield Products booth, caused quite a stir for the thousands of event attendees. The radical ride has also caught the eye of the SEMA Battle of the Builders Young Gun judges, who have selected Jake and his ride to be in the Top 40. 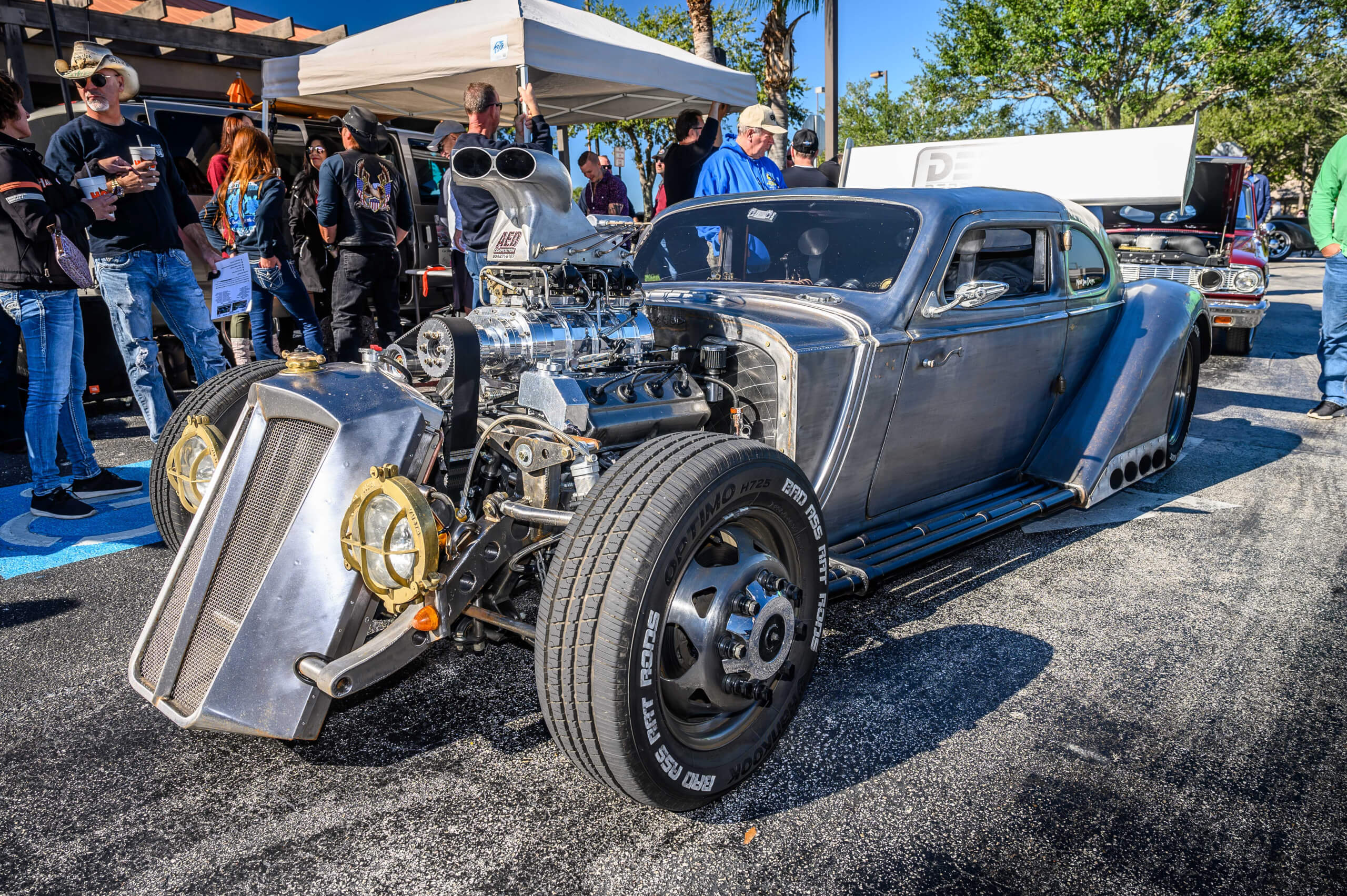 It’s been a whirlwind year for Sean Puz, with highlights being a radical rat rod build, an epic 1,400-mile drive, and a first-place finish in a competition ending at the…