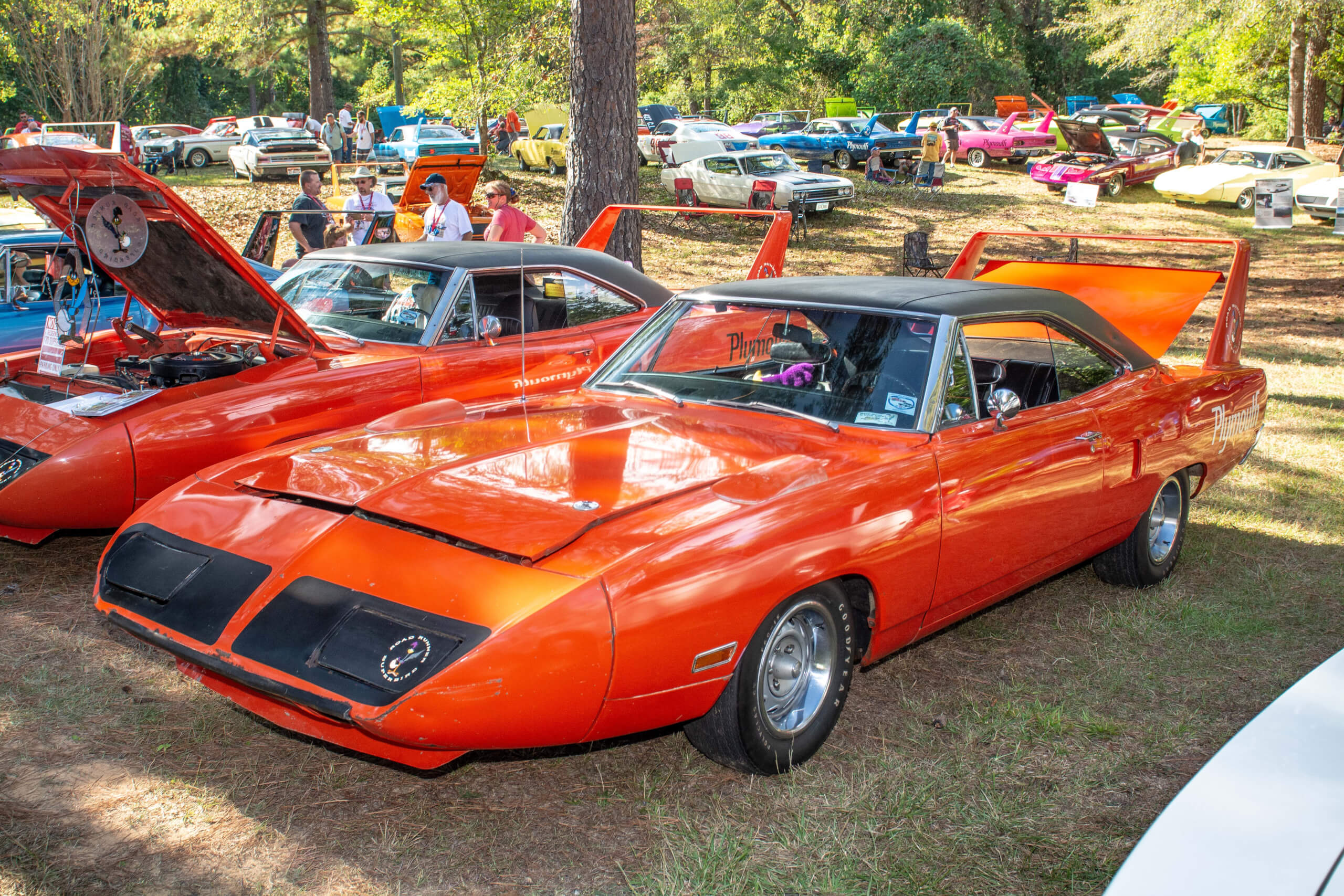 When Doug Goebel first came across his 1970 Plymouth Superbird, he was far from impressed. The year was 1974 and the Edgerton, Ohio, resident was just twenty-two years old. He’d driven some forty miles north into the country with some car buddies, looking for junked-out car bodies to use for street rods. While on the run near Quincy, Michigan, Doug spied the coupe sitting forlorn in a farmer’s hayfield. The Plymouth was extra pathetic, lacking wheels and tires, recent acquisitions by some local thieves. “When I saw it there I thought,’ That’s a good place for this car’,’ laughs Doug. “I found it to be really ugly.”

For the next year, Doug raced off to other projects and didn’t think much about the chance encounter with the winged warrior. In fact, the enthusiast was a Ford loyalist but thankfully, a recent job change would change that. Doug took on a technician position at the Casbere Chrysler dealership in town which soon had him mad for all-things Mopar. “After thinking it (the Superbird) over some more, I realized that car might be worth something someday,’ recalls Doug. “I thought it might be pretty special.”

Despite the change in heart, it wouldn’t be as easy to simply return to the sight of the last spotting. A lot had happened in those twelve months and after going back to the field, it was clear the car was no longer present and accounted for. A determined Doug spent three weekends in a row driving around the rural lanes with careful eyes peeled, keeping watch for the car’s distinct aero shape. “I just couldn’t find it and thought it was gone,’ said Doug.

Thankfully, his spirits were lifted while stopping in a local gas station and sharing his wheeled woes. The lady behind the counter told the young man the special car wasn’t gone, but just relocated. He could find it hidden in a chicken coop at an address she provided him. Doug took off in that direction and true to her word, the car was found. The farmer in possession of it, and the original owner, was ready to part. He sold it to Doug for $1,200. “I asked him how he moved the car from the field to the coop,’ said Doug. “He told me a three-point hitch. Sure enough, underneath, I could see where the gas tank was smashed from being dragged.”

Landing in the Back of the Garage

Despite the success and momentum, things slowed down for the Superbird after it was brought back to Doug’s garage. He drove it for just a few miles before putting the car on the back burner, with Doug becoming more focused on the needs of a growing family. The gearhead never lost his interest in speed, though. The dealership where he worked did make it tough. “They didn’t have any interest in making or selling cars that went fast,’ laughs Doug. “So much so, another mechanic who worked there, too, wanted a Challenger RT. They wouldn’t sell one to him so he ended up buying a plain 340, four-speed car and adding the stickers and emblems.”

When the dealership closed in 1983, Doug went wide-open throttle with his petrol-fed passion, opening up his own shop, Doug’s Performance and Repair. Still in business today, he focuses exclusively on race motors, chassis work and extreme powertrain modification for truck pulling.

Through it all, he’s held onto his orange ‘Bird, walking by in it his garage nearly every day. “Originally, I didn’t like the white graphics,’ laughs Doug, who had bought black graphics to cover the factory markings. Thankfully, those plans never came to fruition. “Over the years, I watched the values climb in value,’ said Doug. “I decided I should leave it alone.”

Finally, after forty-four years of sitting, the retro ride finally emerged into daylight for the first time in the last couple of months. Earlier this summer, Doug set about getting it road-worthy once again with the plan to have it present for the 2019 Aero Warrior Reunion, held in Alexander City, Alabama. The craftsman rebuilt the carbs and performed some other light maintenance before taking it on a quick spin days before the event. This marked the first time he’s driven the classic in over four decades.

Marking another first for the longtime enthusiast, was the opportunity for Doug to take his winged warrior to a most fitting of locales: the banks of the Atlanta Motor Speedway. “It was my first time on a track that wasn’t straight,’ laughs Doug, who is a longtime drag racer. “The first time out for the laps, I had it up to forty-five and thought it was pretty great. The second time out, I shut it down at sixty-five. I didn’t want anything blowing up.”

As if showing the car amongst dozens of others just like it wasn’t emotional enough, on the trip down, Doug had a chance to reconnect with another piece of the car’s past. On the drive from his home in Ohio to Georgia, Doug passed through Bullit County, Kentucky. That’s the same county where the car was sold new and still shows on the plate Doug received with the car. “It’s been a memorable weekend,’ said Doug. “I’m so glad I had a change of heart on this old car.”