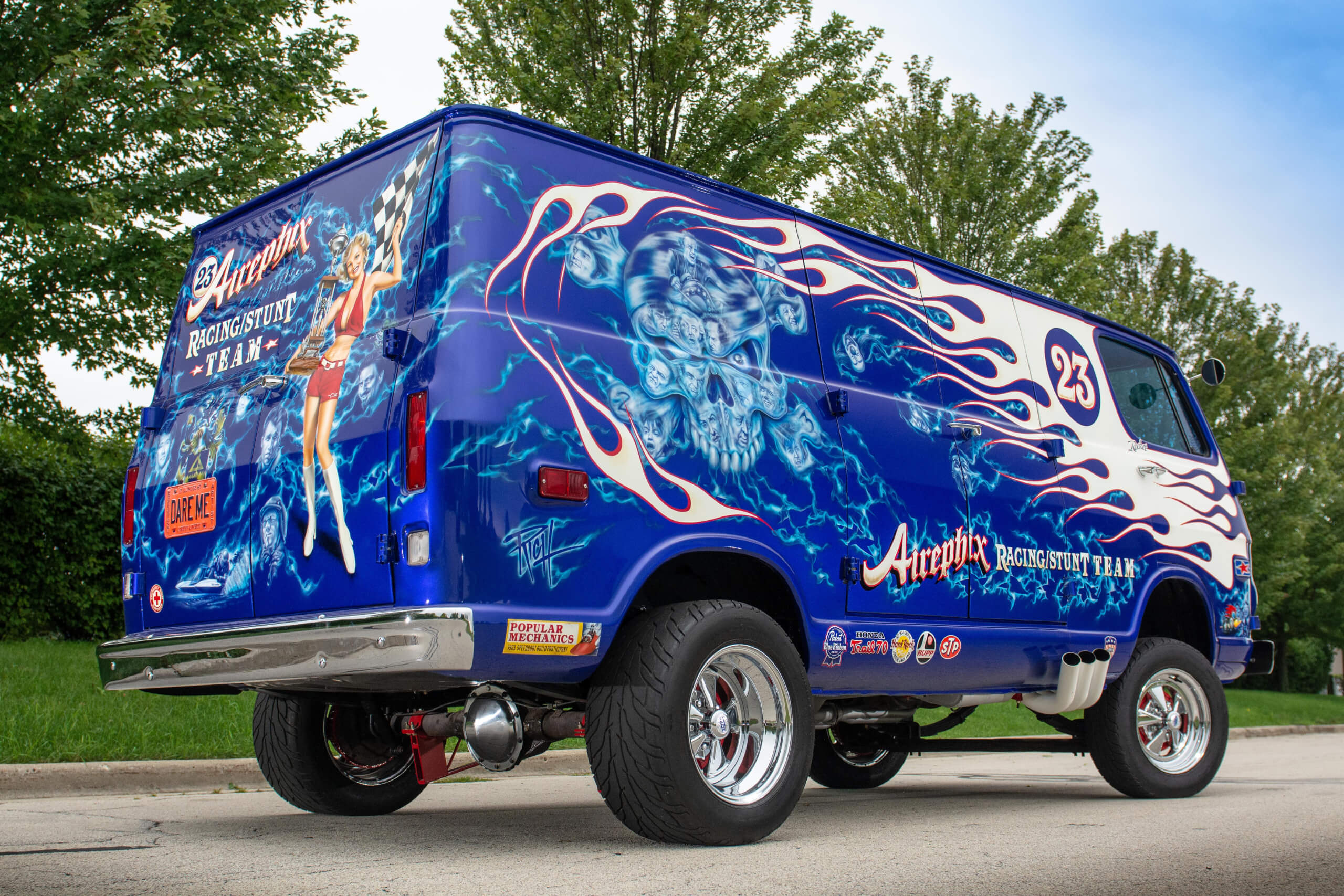 As a kid, Rich Keylard was enraptured by the over-the-top showmanship of stuntman, Evel Knievel. The dare devil’s heart-racing antics and adventures stirred up inside of Rich, who watched the death-defying motorcycle jumps with wide-eyes. “It was my favorite thing to do as kid,’ recalls Rich. “I always wondered what he would attempt next.” Those memories and emotions never left the small boy who always longed to create a rolling tribute, inspired by Knievel.

The perfect opportunity came about decades later, one week after the Thanksgiving holiday of 2009. After cruising around online, Rich found a for-sale listing for a worn and weary 1969 Chevy van, located in Elgin, Illinois. “It had been a TV repair truck in nearby Joliet, Illinois,’ said Rich. “It was bone stock, had a passenger jump seat and showed original lettering on the side. I knew it would be the perfect starting point.”

He purchased the hard-working hauler and returned it to his shop, in Roselle, Illinois. There, he set to work with the goal of making the perfect fictional ‘stunt-style’ van for his custom-paint shop, Airephix. While Evel was the driving force, Rich also incorporated tons of other pop-culture icons and imagery in the artwork along the way.

The first step was to nail the overall look and setup. Rich had something very specific in mind, wanting it to be striking and bold. “The stance is all about looking like it’s something that was going fast,’ explains Rich. “Even without the colors, I wanted it to be something you’d see at a racetrack, ready to run.”

He jacked the suspension high and added custom-built headers and Cragar wheels. While the van looks fast, ironically, its actual potential is a bit more humbling. Under the cabin’s doghouse cover, the stock inline six-cylinder 250ci engine is retained but rebuilt. It’s paired to a three-speed manual transmission, located on the steering column.

After getting the van roadworthy, Rich set to work, applying tons of custom artwork. Rich has spent decades as a professional airbrush artist and the van’s drab sides served as the perfect canvass to showcase his talent. In his day, Evel was hard to miss, always sporting a white leather jumpsuit, highlighted by blue bands of stars. Rich sought to incoporate the iconic motiff but add to it, too. What he came up with was coating the entire vehicle in House of Kolor Majic Blue and laying on white licks of hot flames, outlined in red.

From there, Rich added on a whole host of lifelike characters, painting on portraits of stars from pop culture of the 1960s, ‘70s and ’80s. In the faces, you’ll see the cast of the rock band, The Monkees, Jimmy Hendrix, Jim Morrison, Janice Joplin, Steve McQueen and Burt Reynolds. “It’s all stuff I used to watch or listen to as a kid,’ recalls Rich, who got additional ideas for his van from the A-Team’s ride.

Icons from car culture are in the cast of characters, too. The artist included George Barris, whom he’s met twice, and artist, Ed Roth. Much closer to home, Rich included his parent’s, painting on their high school portraits. Rich’s son, Rein, also makes an appearance. 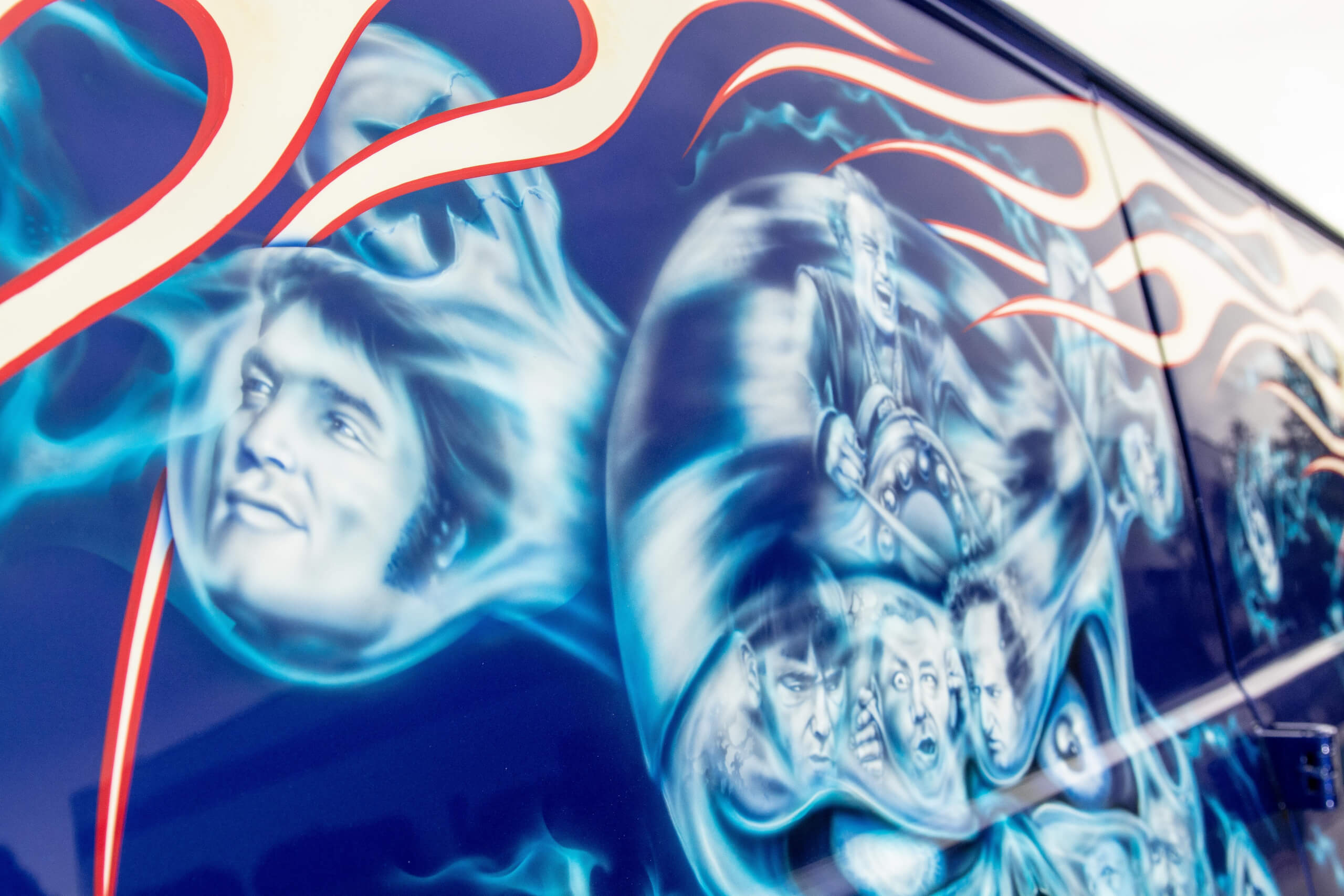 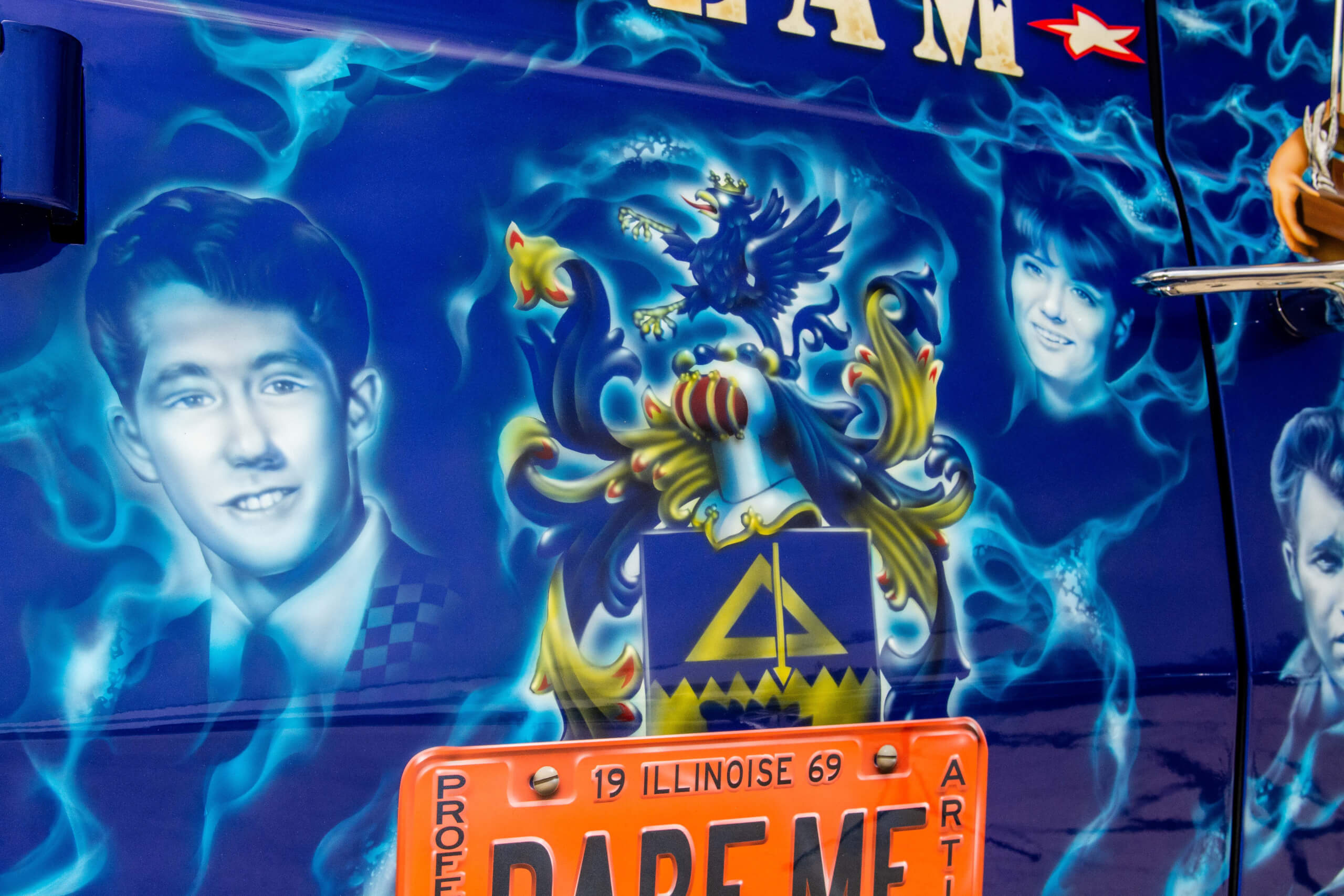 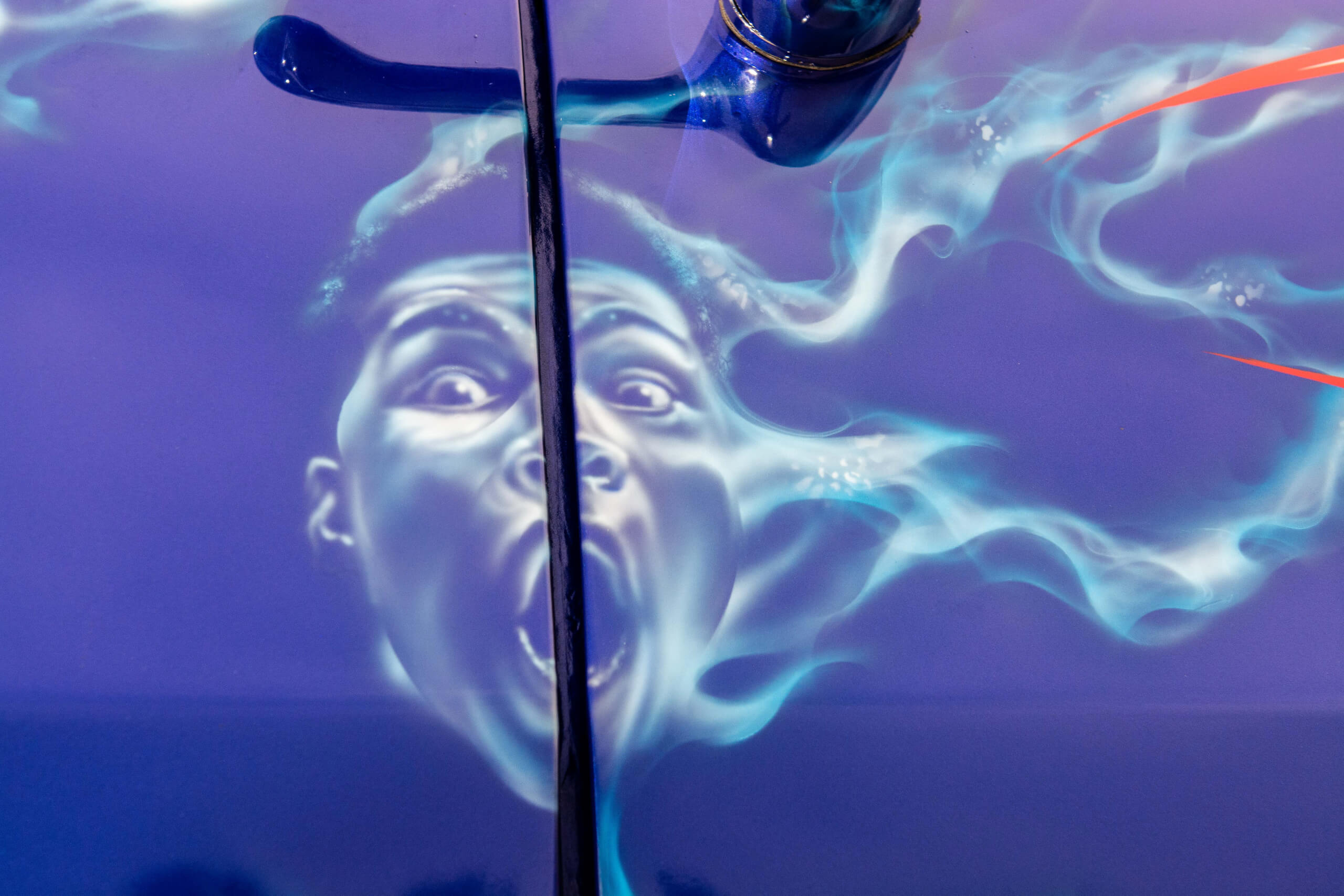 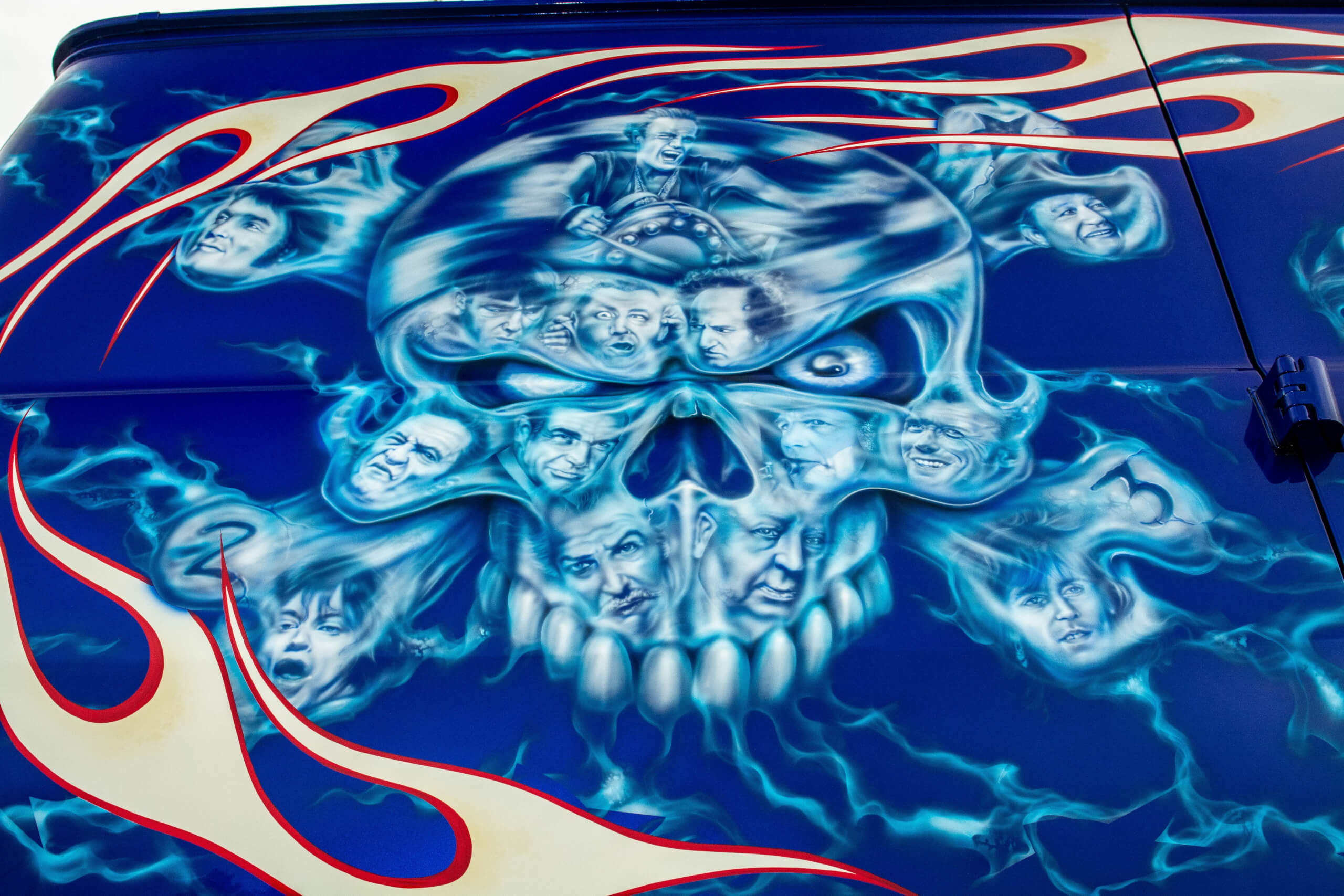 Inside, Rich built custom wood cabinets, which house his Evel Knievel collectibles and vintage toys. Other touches on the cabin include white shag carpeting, custom lighting and tons of custom painting. The repairman’s jumpseat was retained. As Rich does haul (mostly his show display), he made sure to coat the floor in a tough, bed-liner spray. 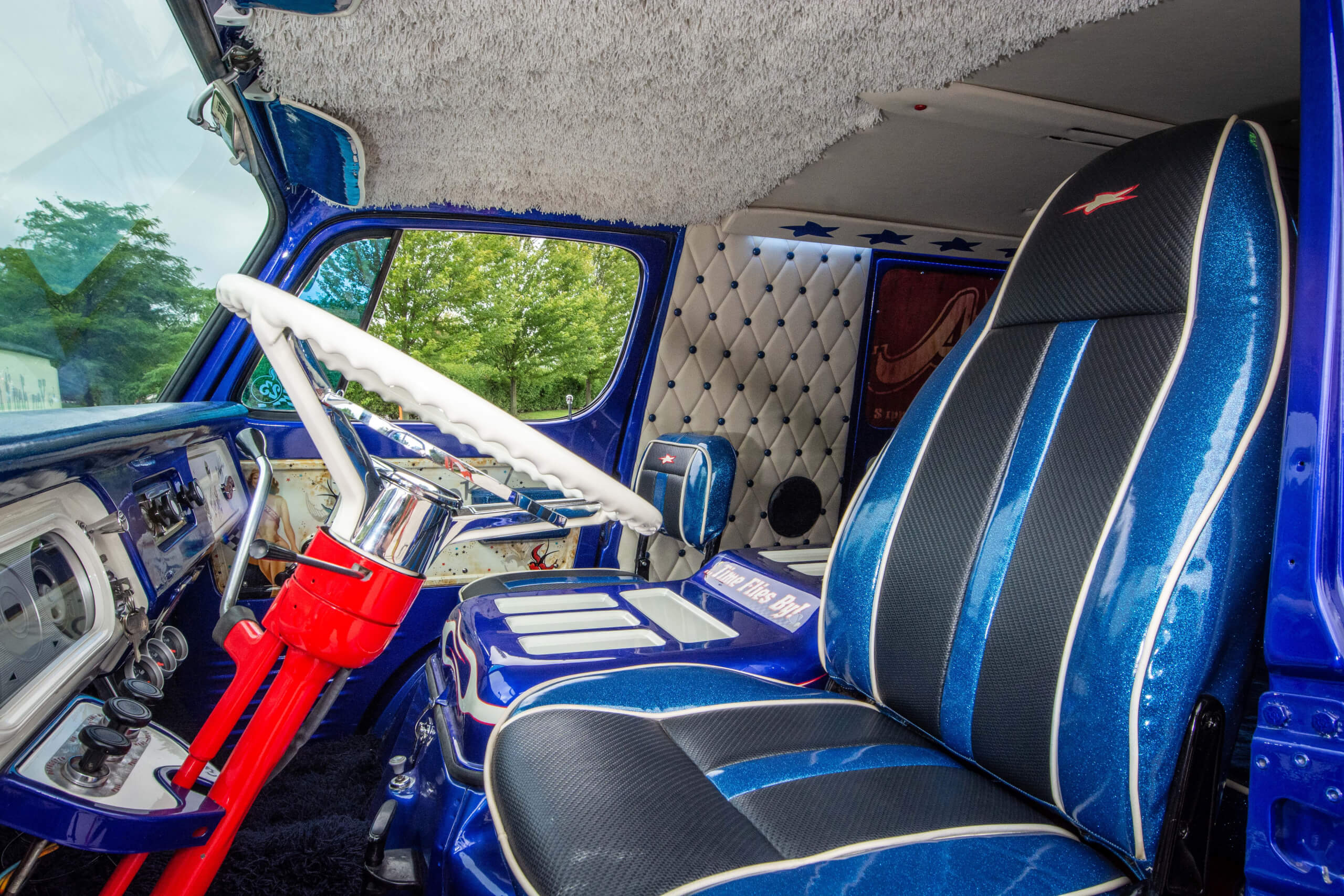 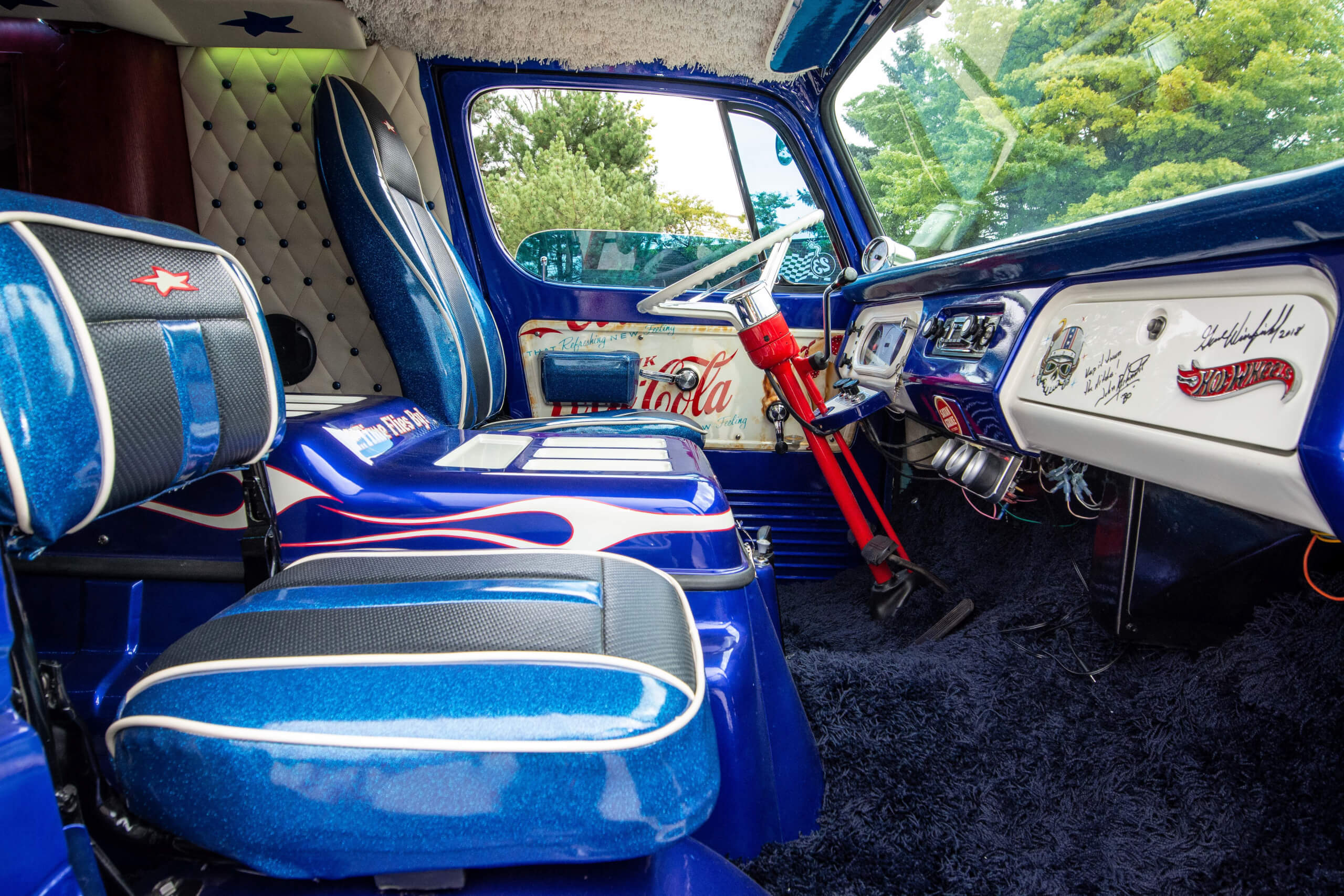 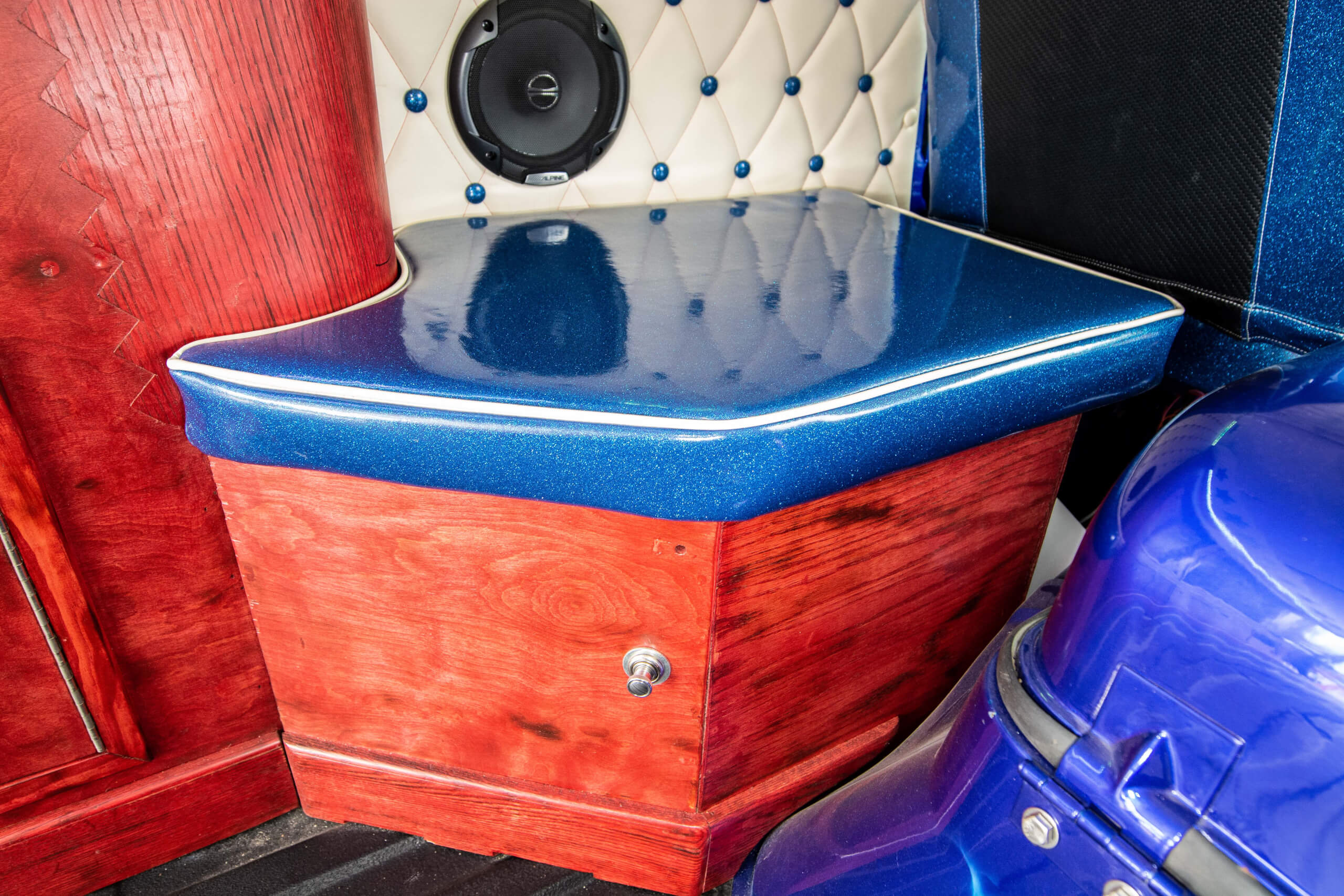 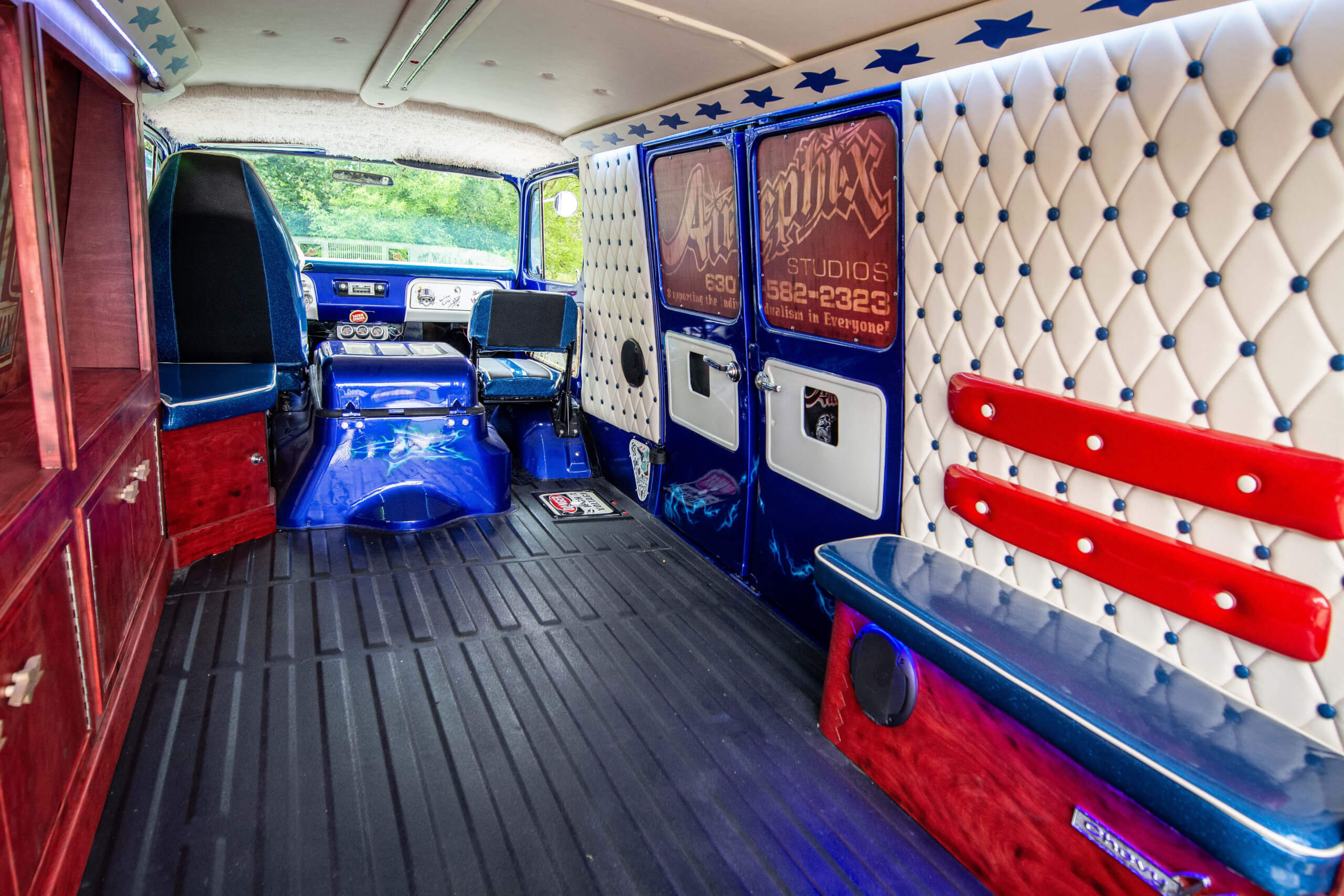 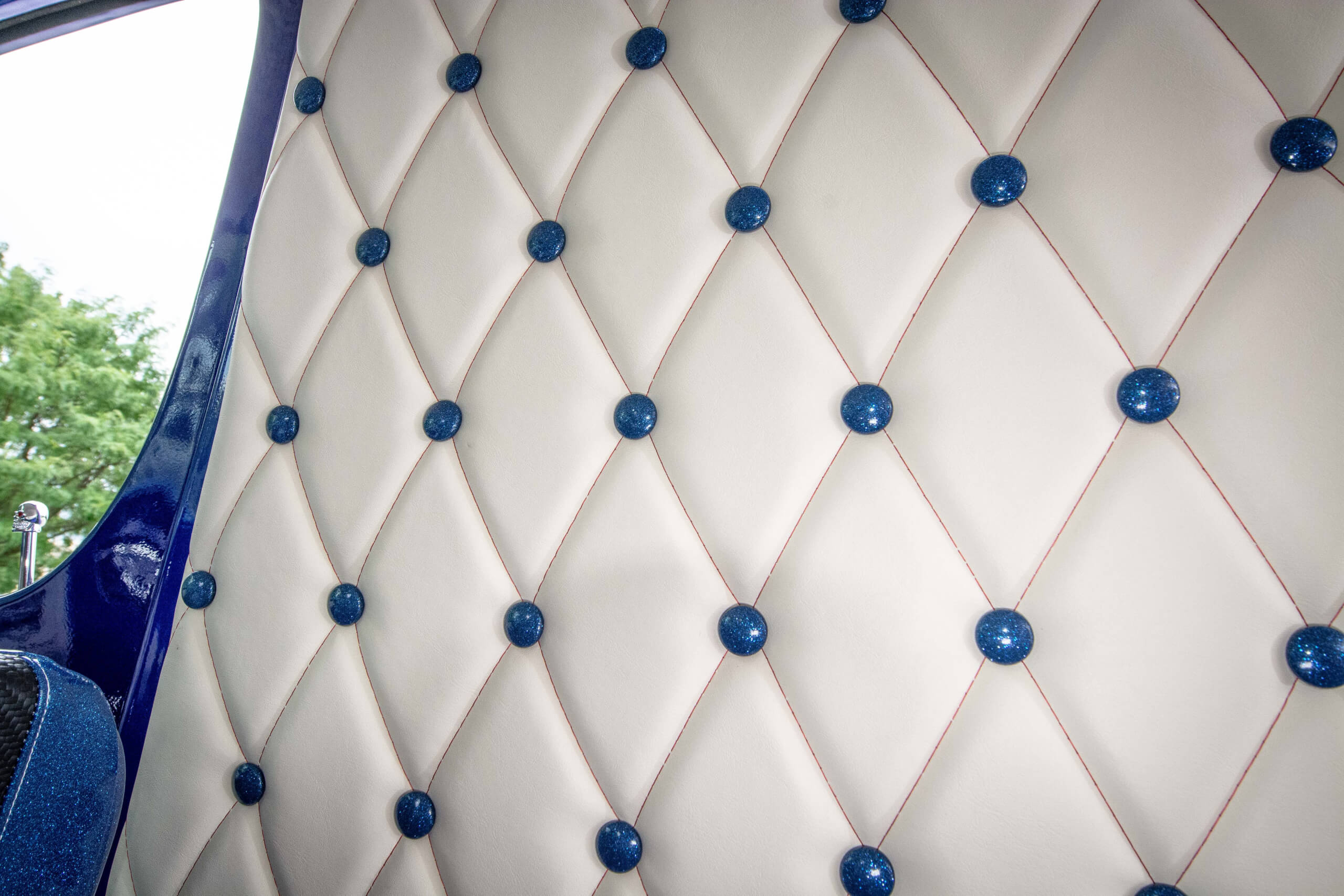 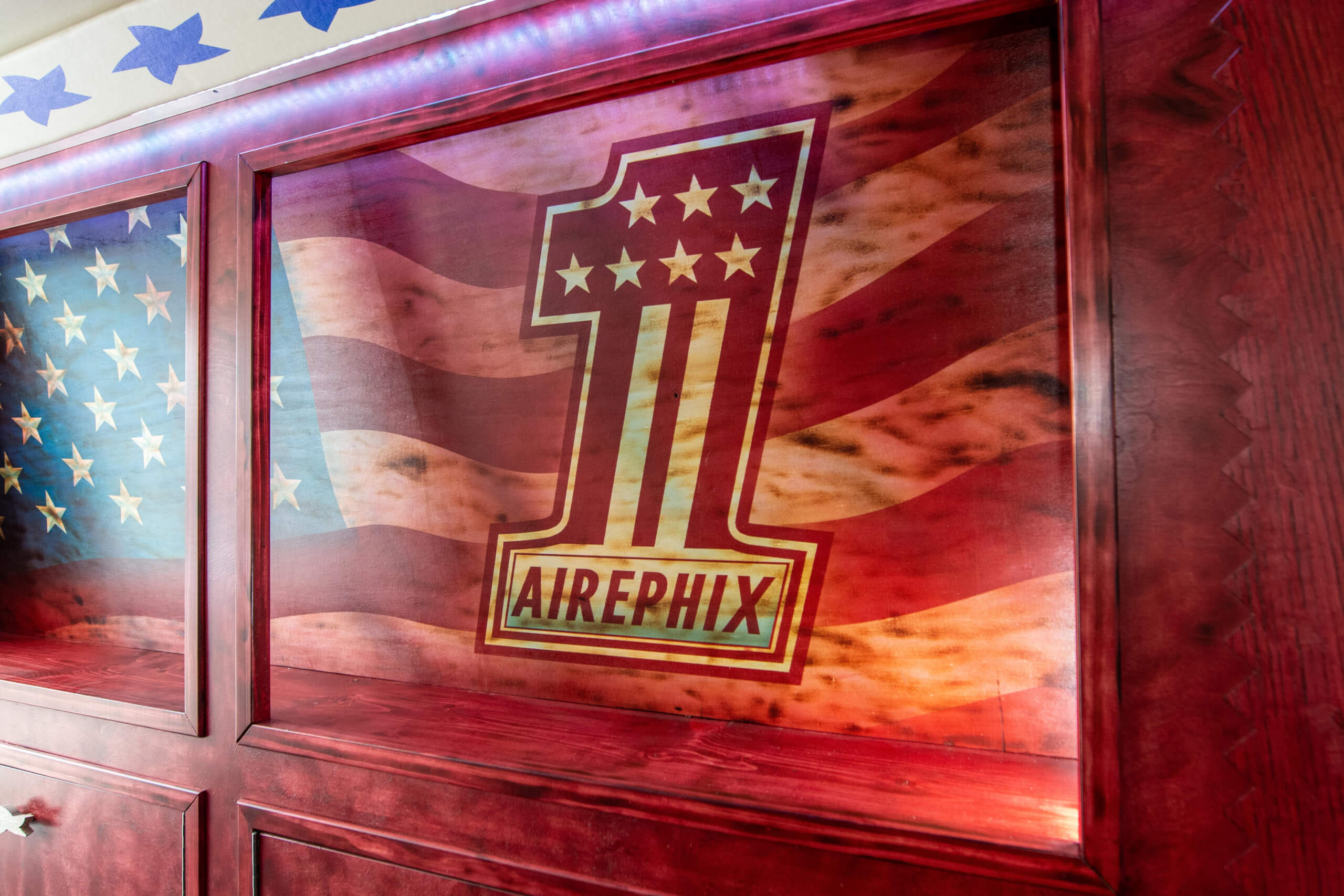 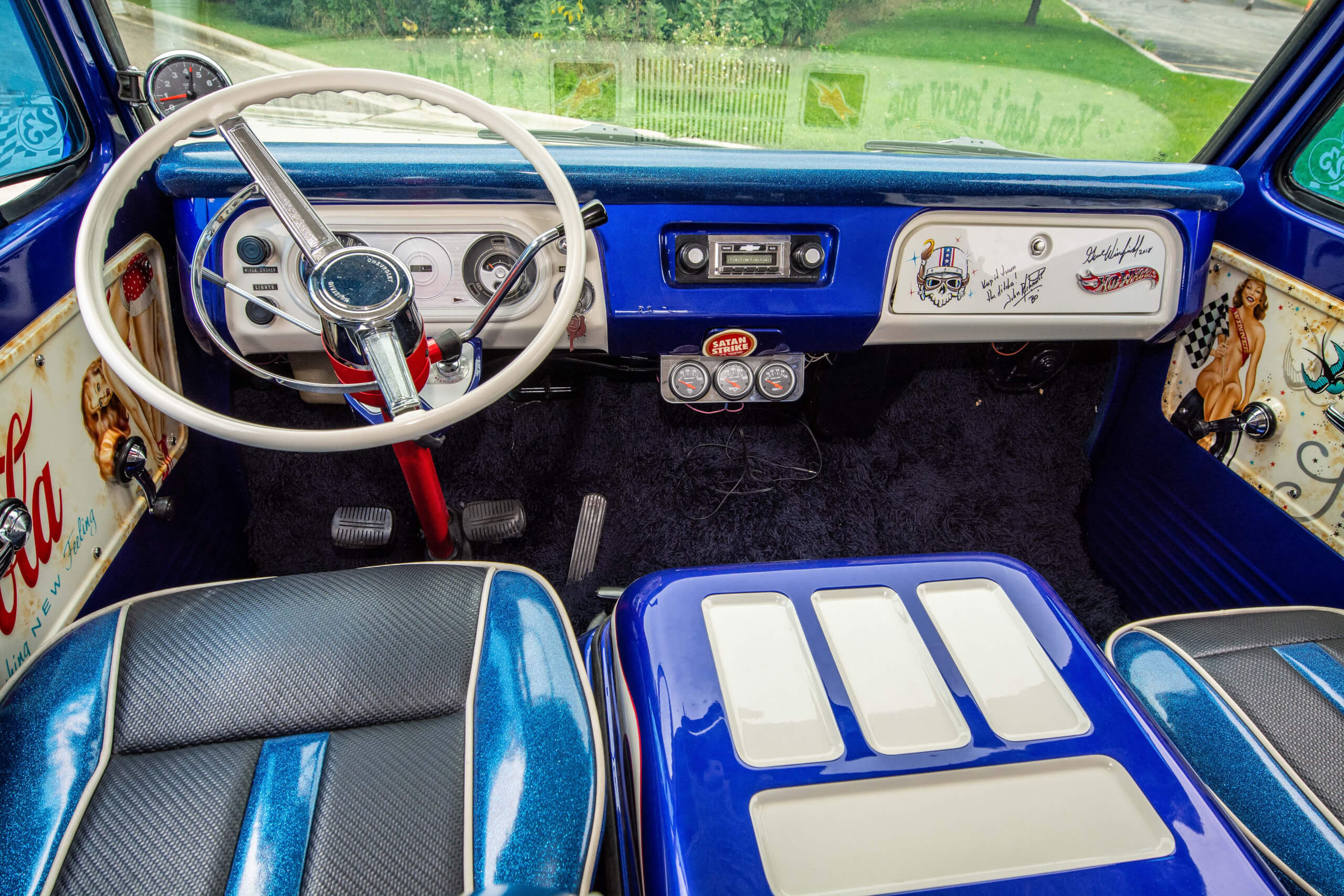 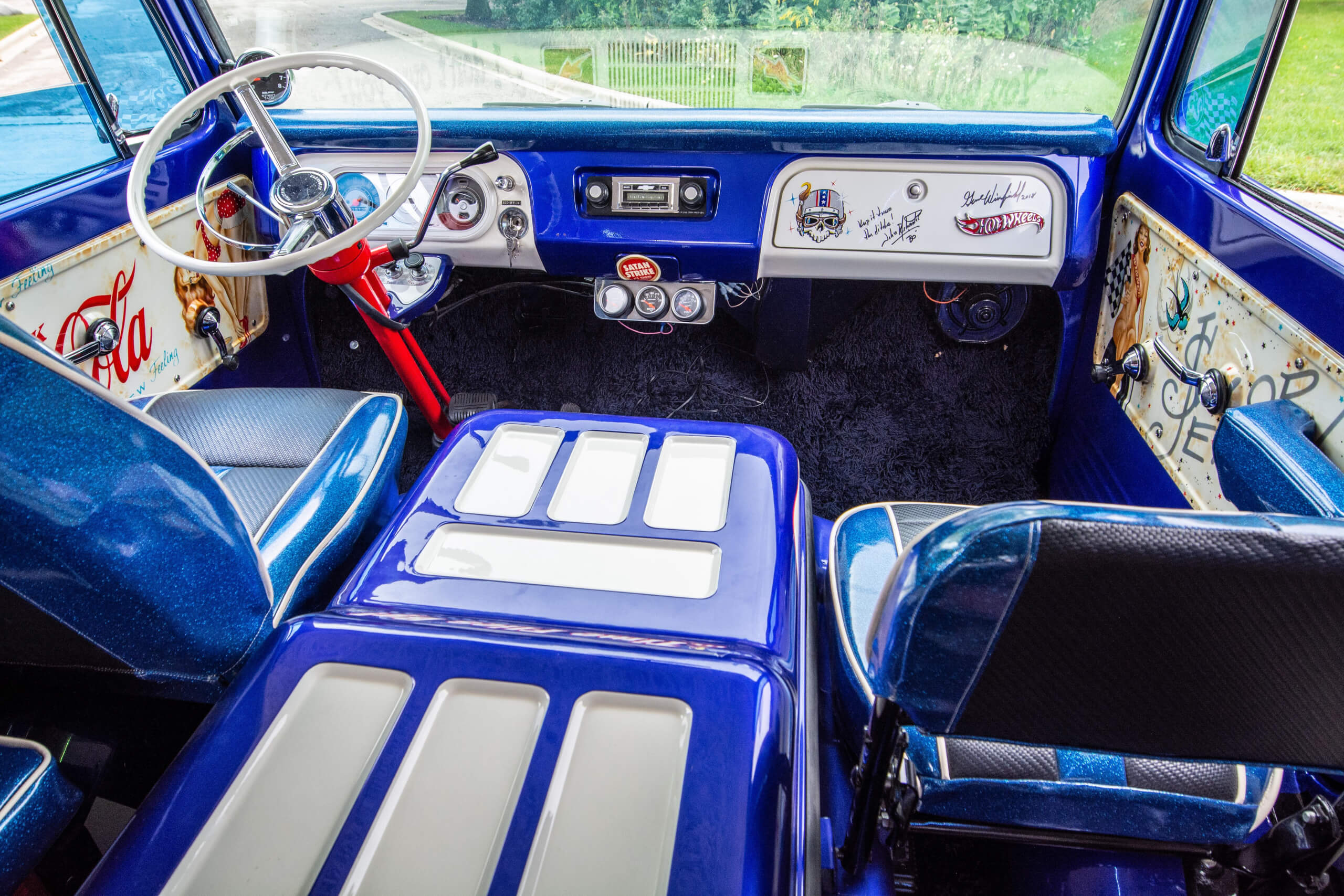 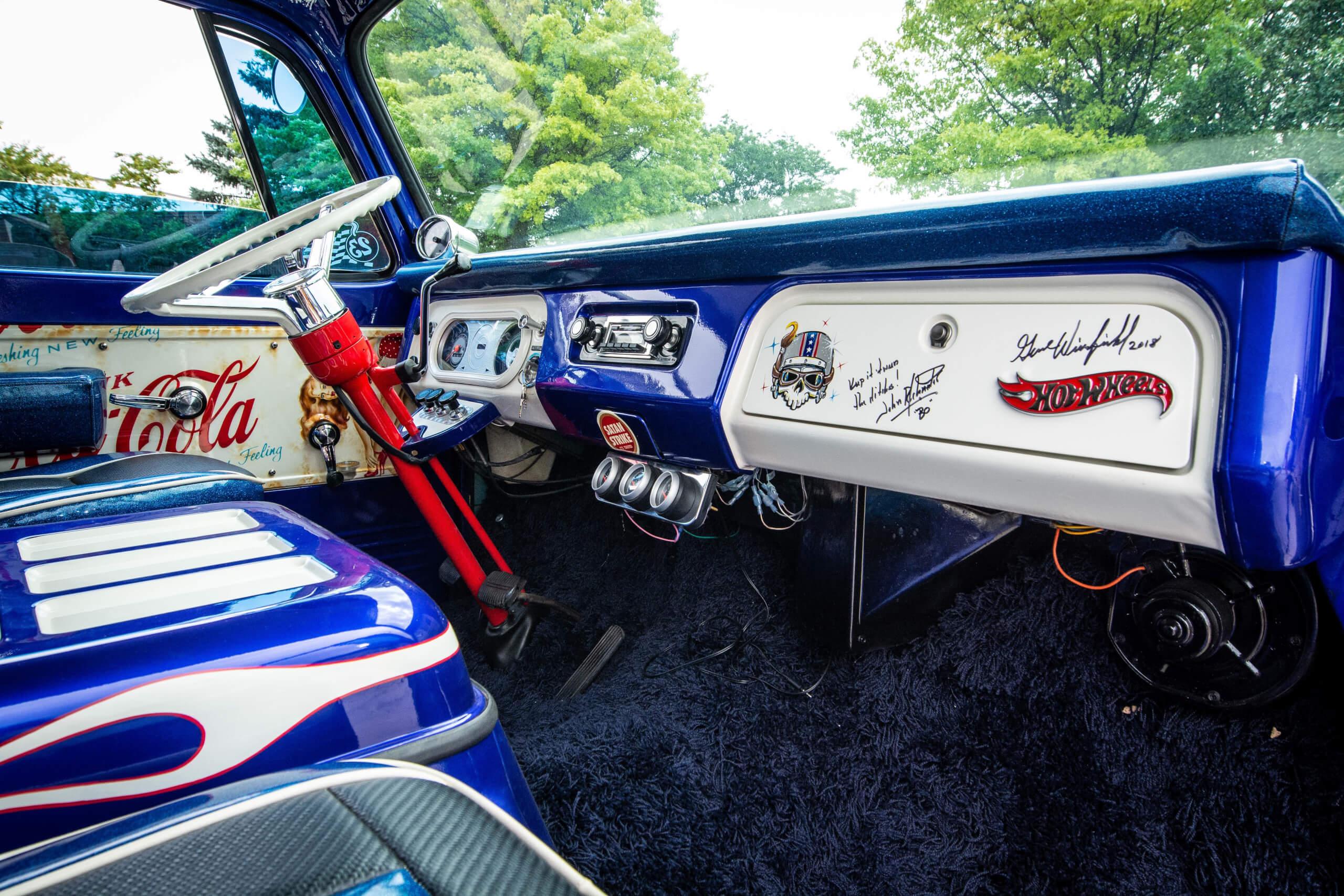 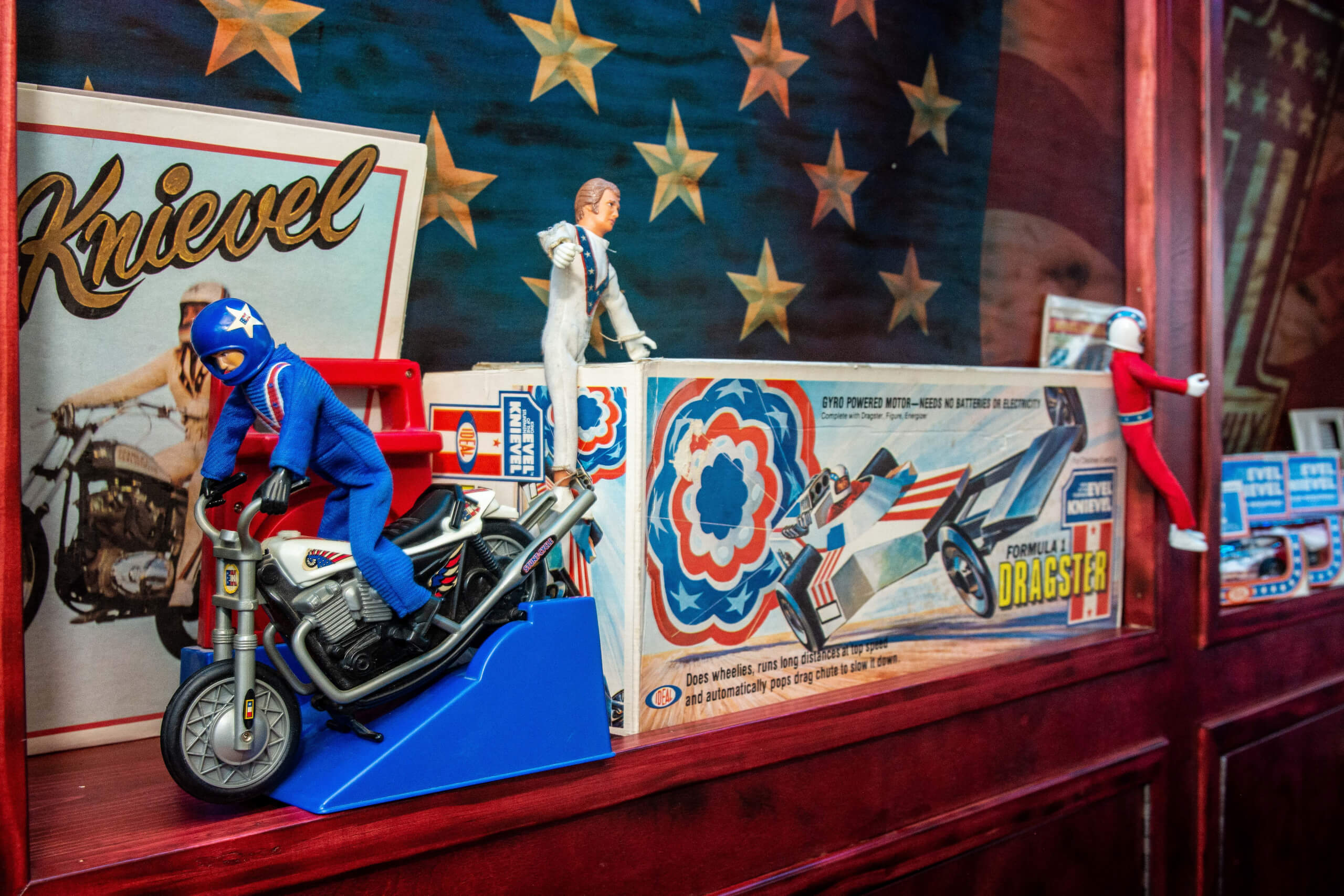 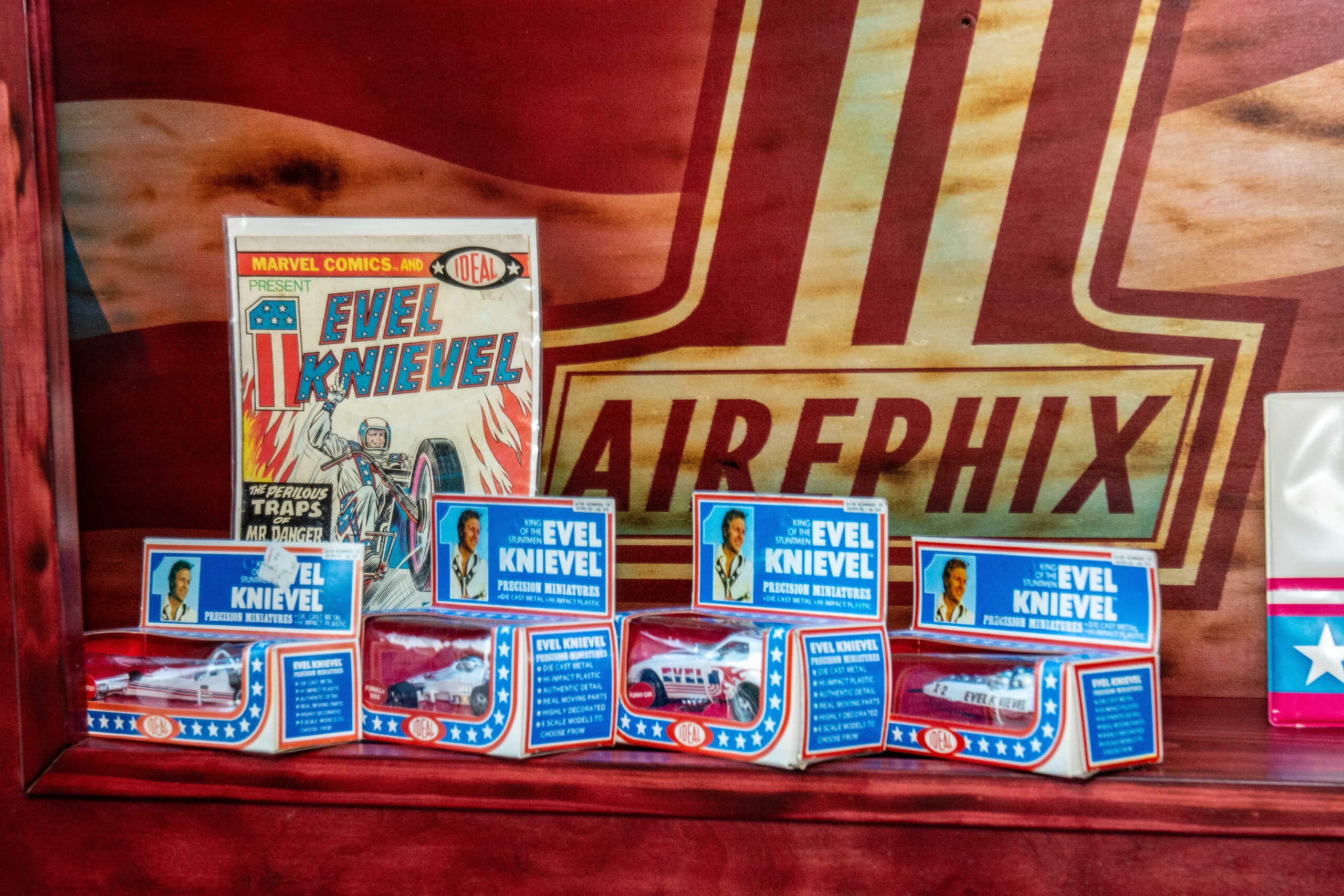 The project was completed in the Spring of 2018 and unveiled for the first time at the 2018 World of Wheels Autorama car show, held in Rosemont, Illinois. Since then, Rich has spent the Chi-town summer showing off his motoring masterpiece. Just as his hero, Knievel, would never settle and always kept moving forward, Rich has even more ideas in the works. The mastermind has plans this winter to chrome the front straight axle. He’ll also be beefing up the motor, all in the pursuit of making the van go even faster. Evel would be so proud.