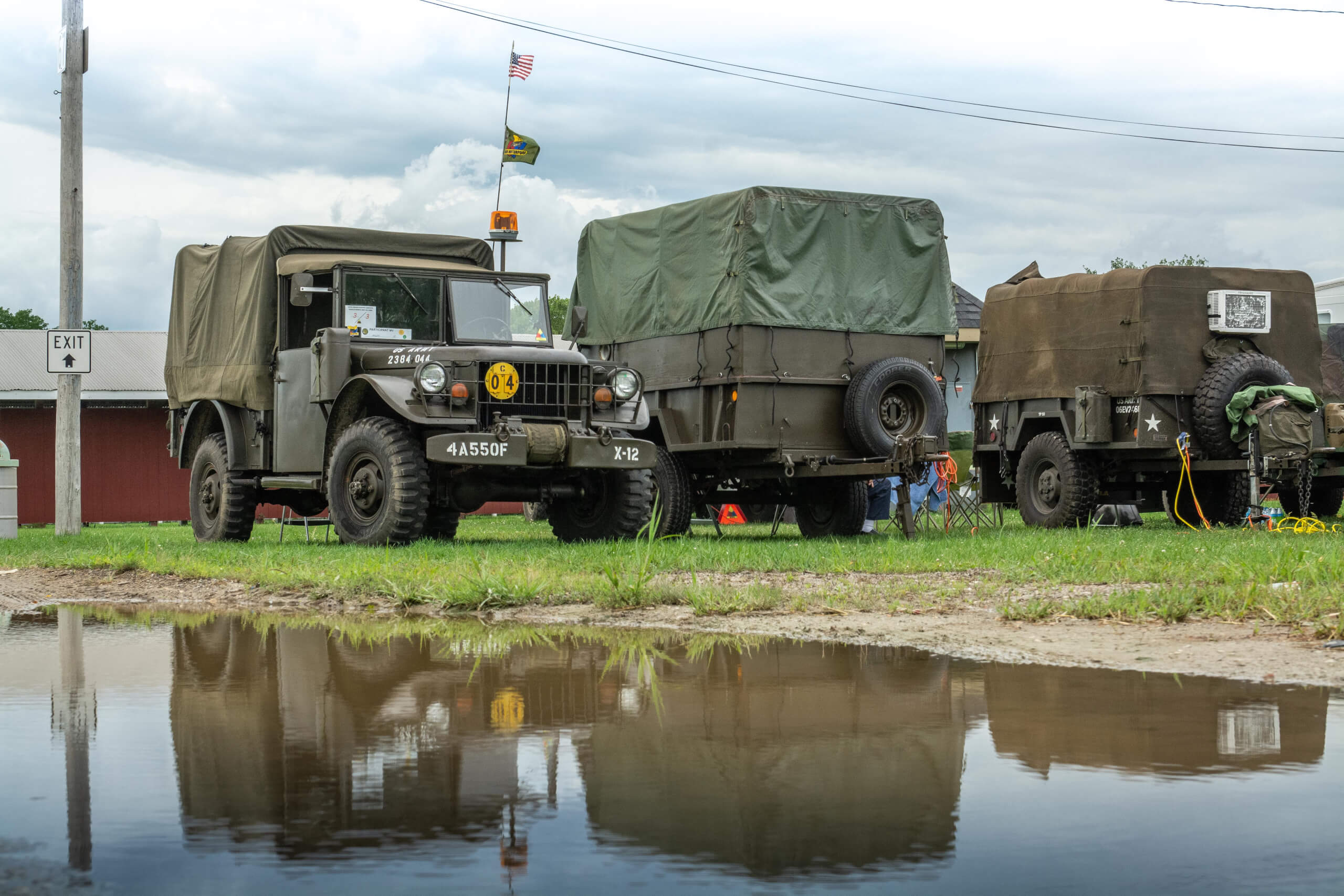 In 1919, the United States Army embarked on an ambitious venture, driving a convoy of vehicles cross-country. Now, in celebration of that trips’ 100th anniversary, a collection of passionate enthusiasts are completing the same journey.

Commissioned by President Wilson, the first voyage was to demonstrate to the American public the importance and necessity of having a good, reliable road and highway transportation system. At the time, many well-traveled thoroughfares were gravel and dirt with bridges being narrow, rickety structures. Wilson tasked the military with taking the Lincoln Highway, which had just been completed in 1913. While a good step in tying our nation’s roads together, there was still plenty of room for improvement.

Other fringe benefits of the venture included lots of real-world testing. Tire companies, in particular, were able to see firsthand the benefit of pneumatic tires versus solid rubber tires, which buried down in sandy and muddy stretches. Data was also collected for maps to be created and the Army did recruitment along the way.

That original convoy was composed of two companies, A and B. In Company A there was one light open car, one staff observation car, an ambulance, three motorcycles, eighteen trucks, a machine-shop truck, a kitchen trailer, and a tank truck. Company B had one light open car, a heavy open car, a reconnaissance car, a heavy ambulance, three motorcycles, seventeen trucks, a trank truck, a kitchen trailer, and a water tank trunk. Some of these were loaded down with as much as fourteen tons of gear and equipment. Manning them were nearly three hundred officers.

Four civilians were also part of the journey. They drove a Willys-Knight touring car and three Overland 4s, which ran several miles ahead of the nearly three-mile-long motor train, serving as scout publicity cars. The entire outfit left the Capital building in Washington, D.C., on July 7th and arrived in San Francisco, on September 5th.

They kept a brisk pace, traveling some sixty miles a day. Every city they passed through became a source of celebration. Spectators traveled hundreds of miles to see the group and the soldiers were welcomed with receptions, street dances and band concerts. In Cheyenne, WY, actor and comedian Fred Stone and three hundred cowboys greeted the group. A Dr. S.M. Johnson was the official lecturer of the convoy and made addresses at each stop on the importance of good roads.

Other groups seized on the opportunity to raise awareness for the strong need for reconstruction and the move for customers to ship goods by truck. For example, in Salt Lake City, Utah, the Motor Truck’s Dealer’s association organized their own parade, consisting of some one-hundred-and-fifty trucks, adorned with painted banners proclaiming ‘Ship by Truck’. The city even declared August 17th the first annual ‘Truck Day’.

Up a Creek: Roadside Problems

The military trip wasn’t a leisure cruise. Hardships and delays arose. Streams and creeks presented great difficulties, with the existing antiquated bridges unable to support the weight of the vehicles. Many times the group’s only option was to ford the waterways. Other times, army engineers would strengthen or entirely rebuild the bridges. In total, sixty-five bridges were rebuilt on the route. In one day alone, fourteen were done.

The group did arrive at the journey five days behind the planned schedule. Two days were lost to torrential rain in Nebraska, which turned the dirt-packed roads to sloppy mud. An additional three days were lost in the deserts of Utah and Nevada. When the group finally arrived in San Francisco, a milestone was erected to mark the achievement. Each solider also received a medal.

For this celebratory tribute journey, the passionate group started in York, Pennsylvania, leaving on August 10th, at the close of the 44th annual Military Vehicle Preservation Association’s Convention. Forty-nine vintage vehicles are participating in the thirty-nine-day drive west, taking the exact same route. Those trucks, jeeps and more all hail from around the country. Even international participants showed up, with six drivers coming from New Zealand, Australia and Belgium. Roughly sixty-percent of the participants are military veterans. Each night, many of the members are sleeping right inside their rig or camping closeby. Others are staying in RV’s brought along.

The vehicles themselves range from a 1918 Dodge staff car all the way to ambulances and heavy trucks from the 1990s. There’s also a large turnout of the iconic 1940s-era Willys Jeep, that helped mobilize the Allies to victory in World War II. Even five-ton trucks are tagging along. Each of the vehicles are adorned with special door plaques, showing military men and women who are relatives of the drivers. 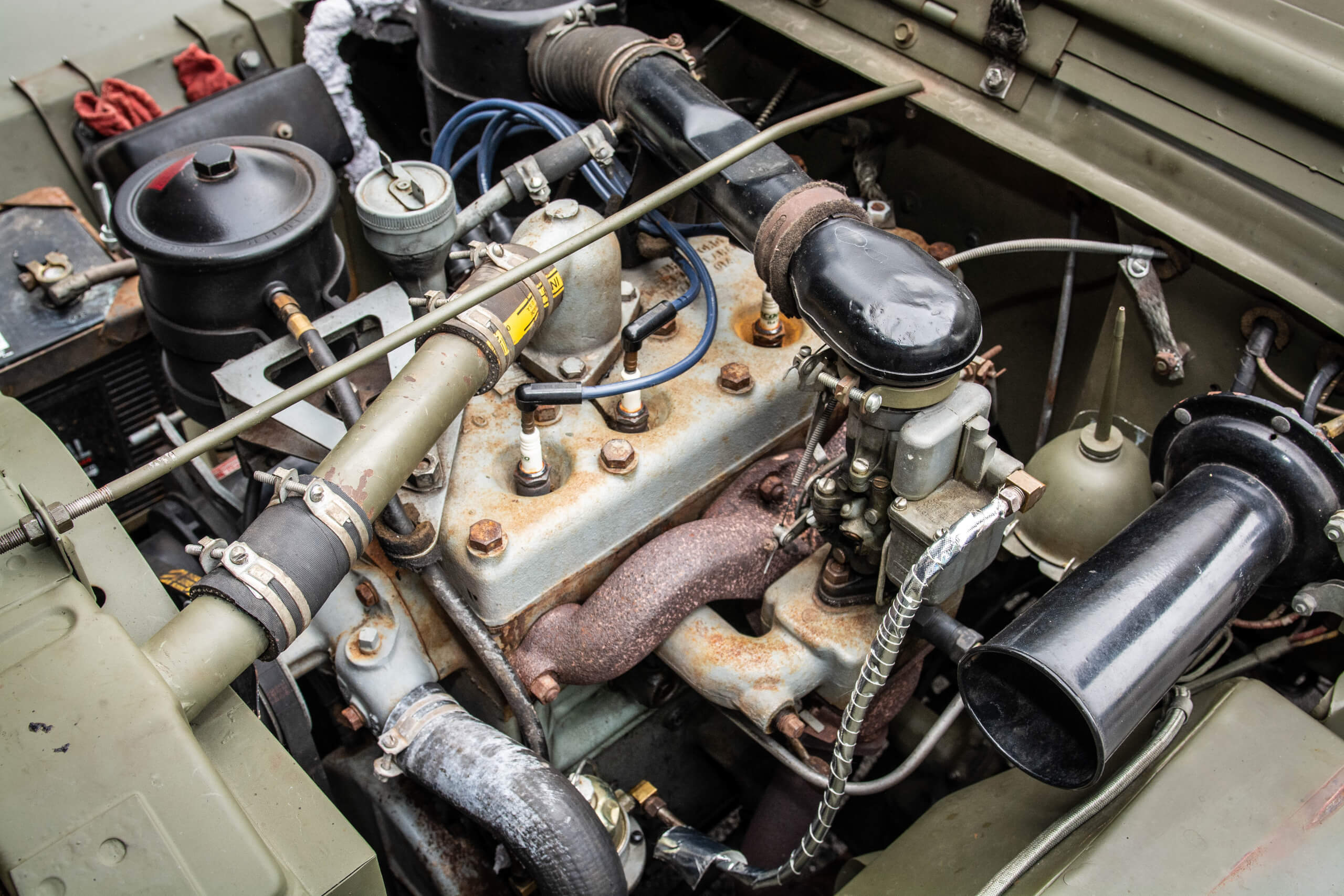 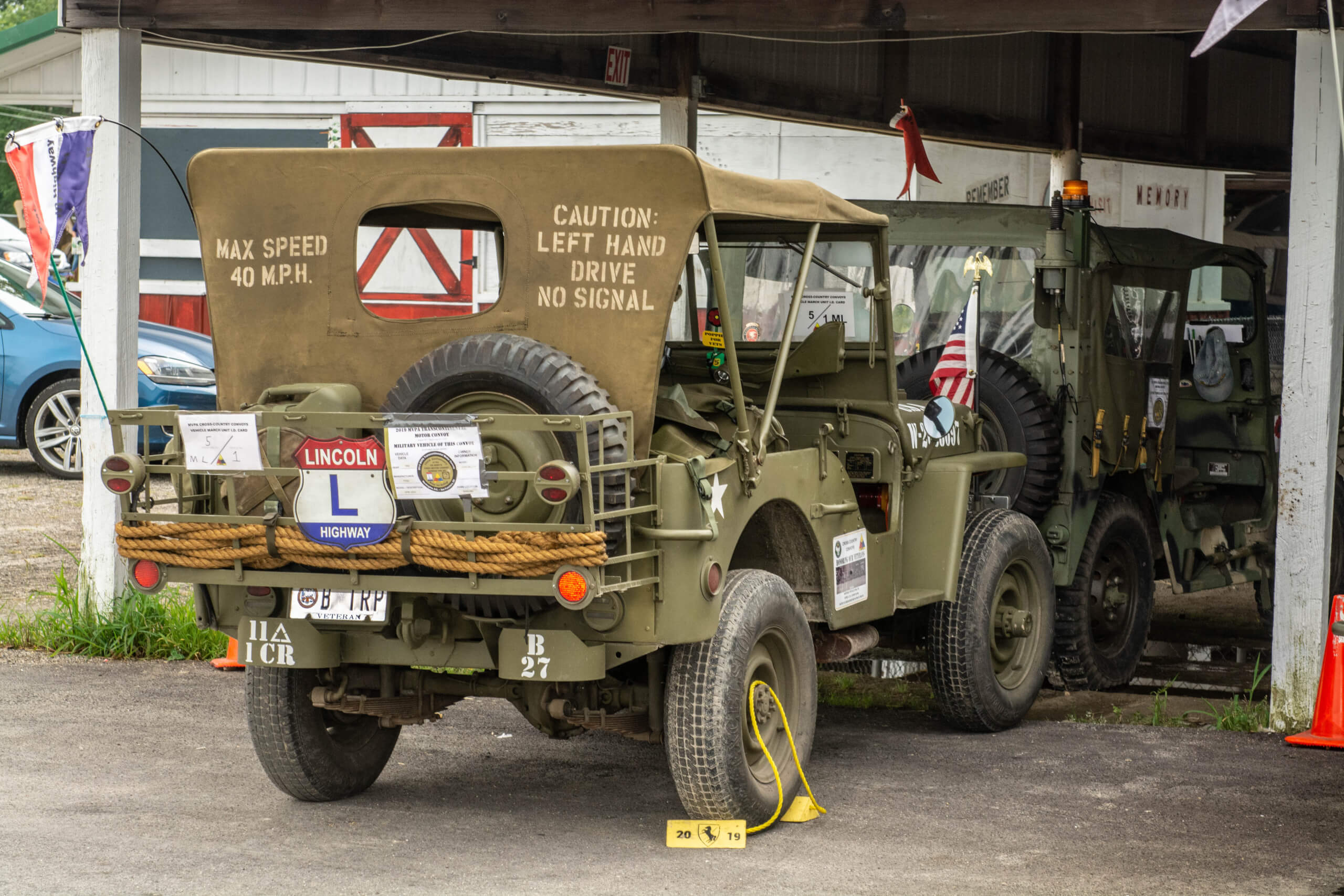 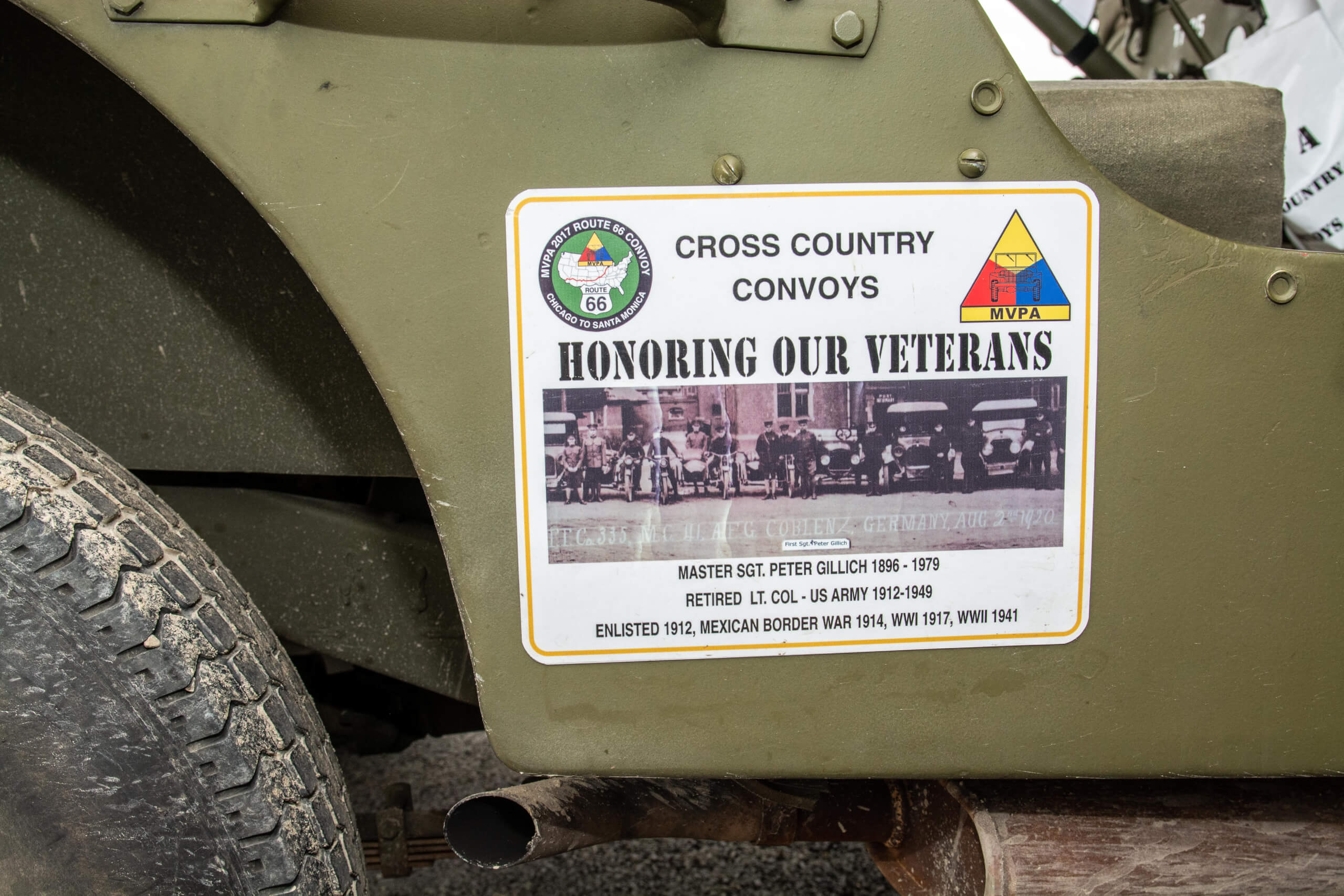 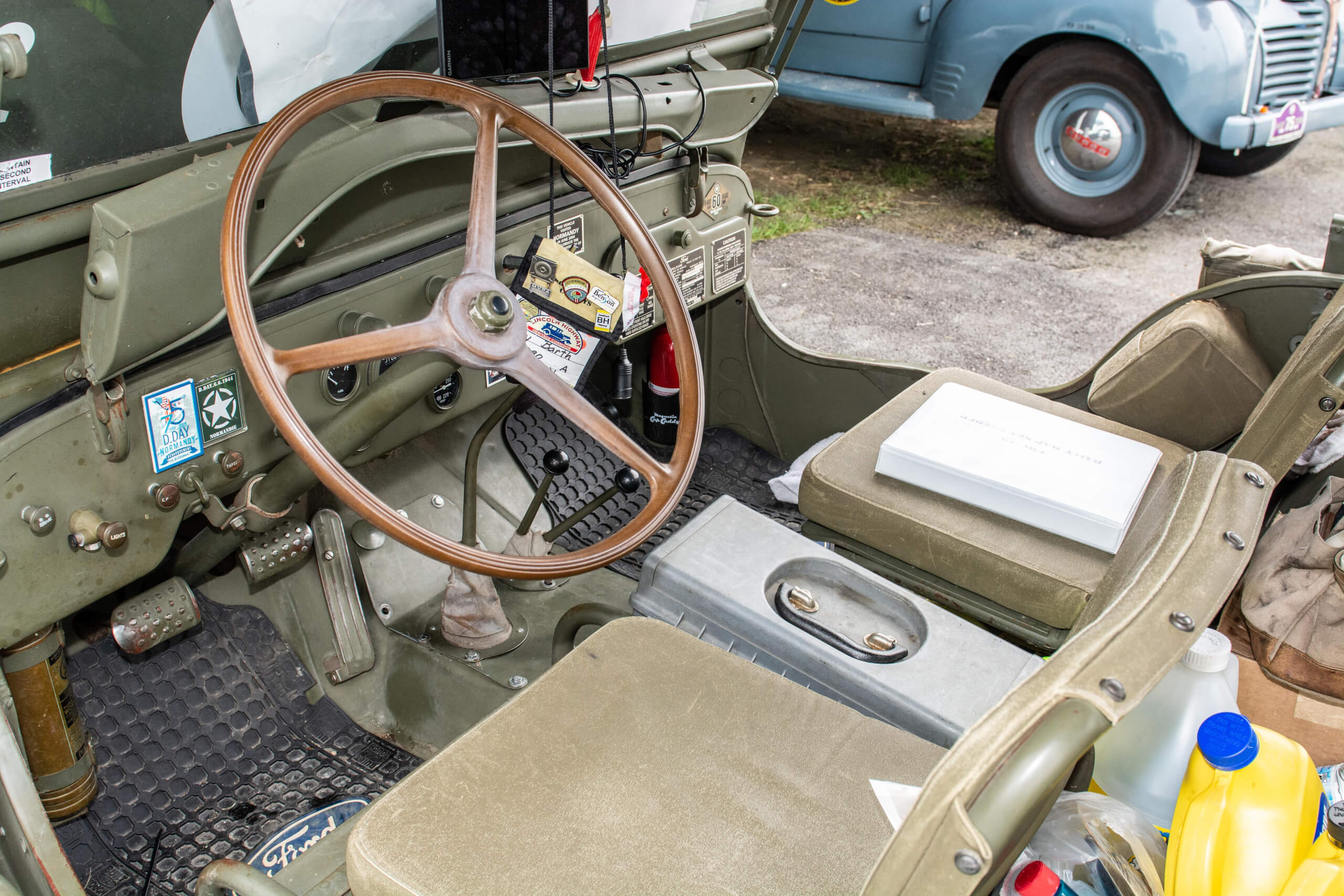 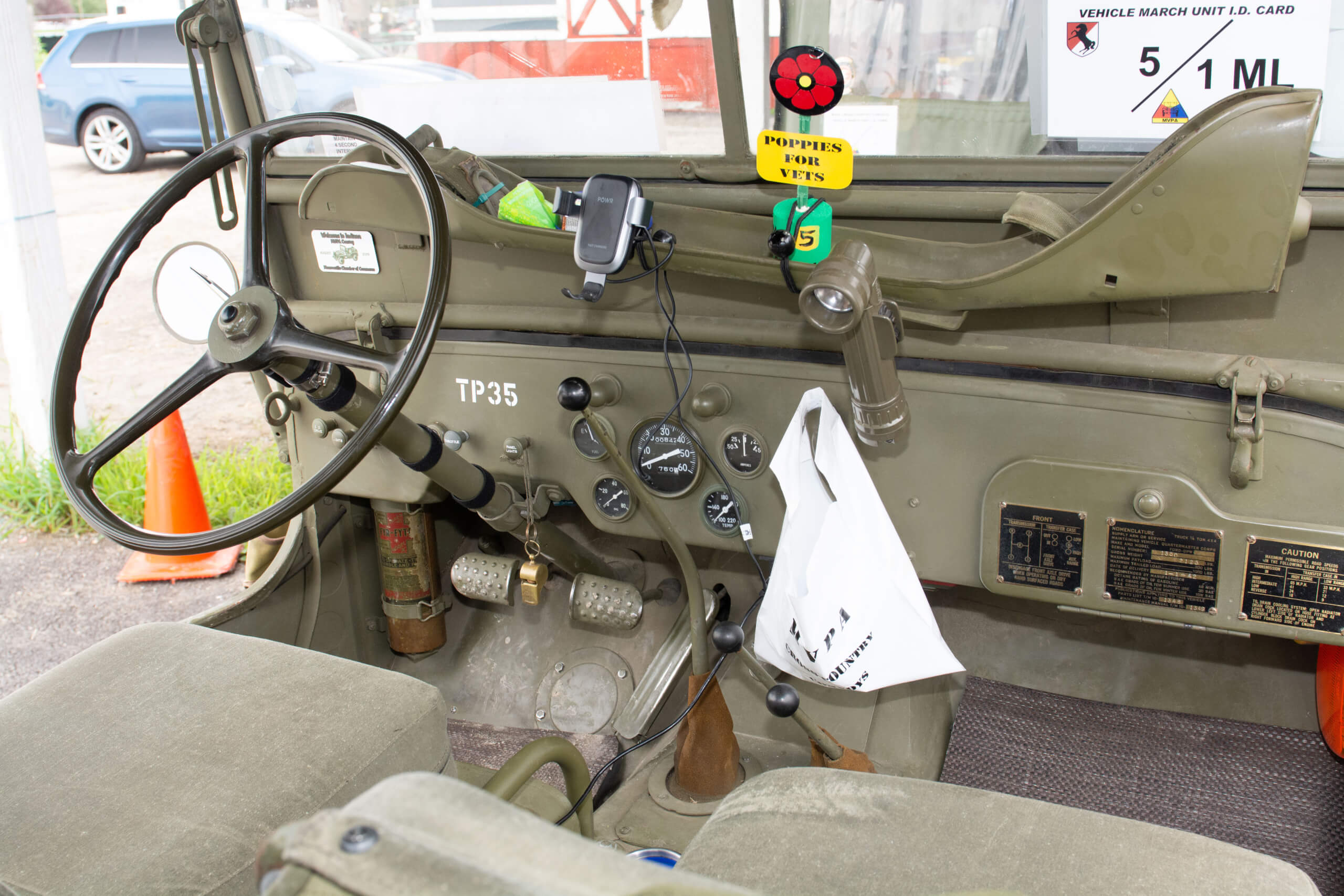 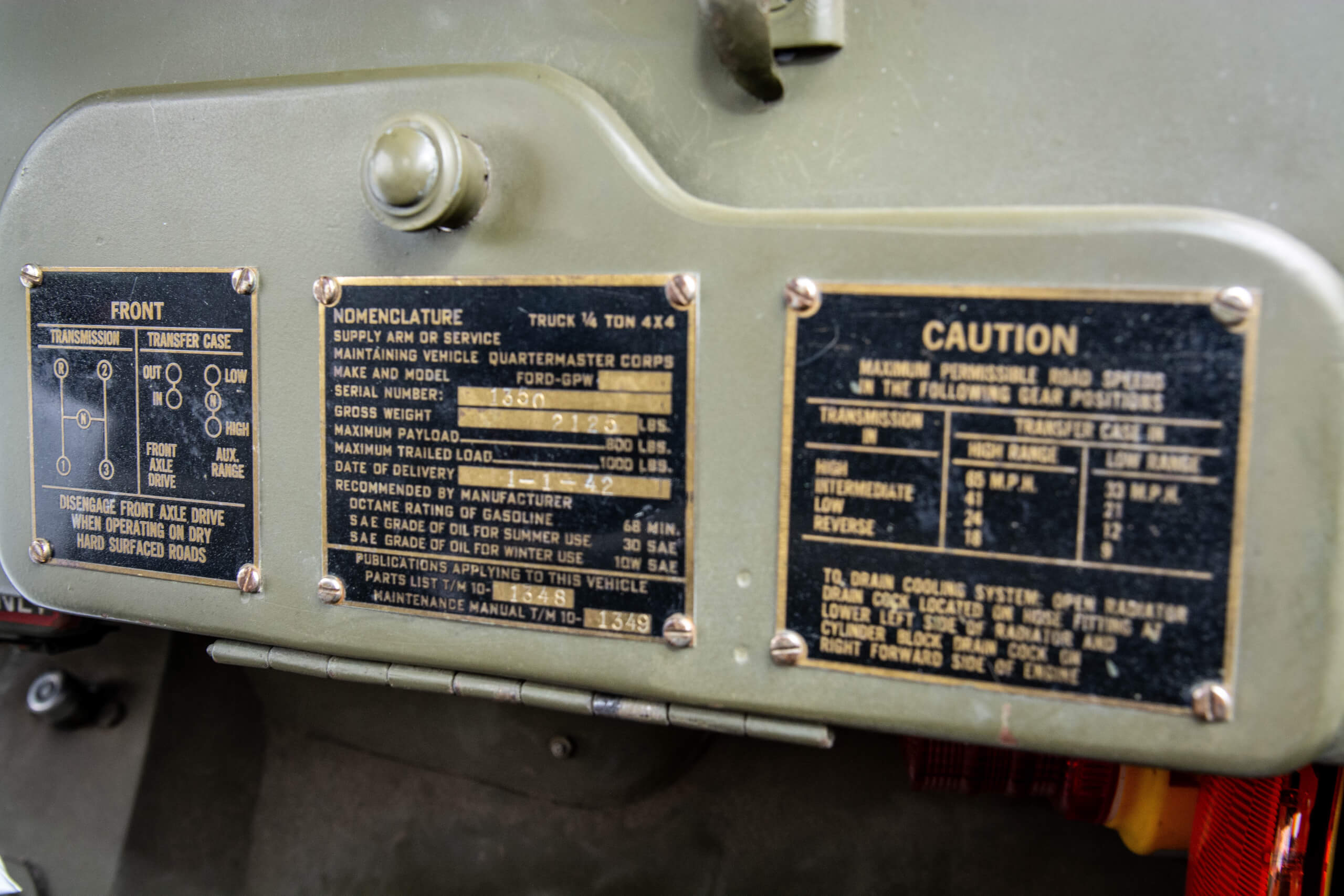 Just like the original, this convoy will also be making planned stops and giving the public the chance to see their vintage vehicles and learn more about the historic road trip. One of those breaks was in the Chicago-area, where the group base-camped for two days In Wheaton, Illinois. On the first day, they held a static display at a most-fitting locale: the First Division Museum at Cantigny Park, in Wheaton, Illinois. The museum celebrates the on-going legacy of the Army’s First Infantry Division, known simply as the Big Red One. The outfit was started in 1917, not long before that first cross-country convoy.

The second day was a rest day, with nearby fairgrounds hosting the large outfit. That allowed for some downtime, as well as a chance for many to perform maintenance checks.

The group left the Windy City, sharply at seven A.M. this morning and are driving to their next locale, which will be a display in Nevada on September 12th. While the group is currently engaged in a massive undertaking, plans are already in the works for future journeys. In 2020, the group will drive a National Parks loop, cruising through Idaho and Montana. In 2021, the cross-country commute will take place again but instead of the Lincoln Highway, they’ll take the Yellowstone Trail, driving from Plymouth, Maine to Seattle, Washington.

Follow along with this journey’s progress with the team’s real-time tracking.

The Road to Progress: A Convoy of Vintage Military Vehicles Cross the Nation