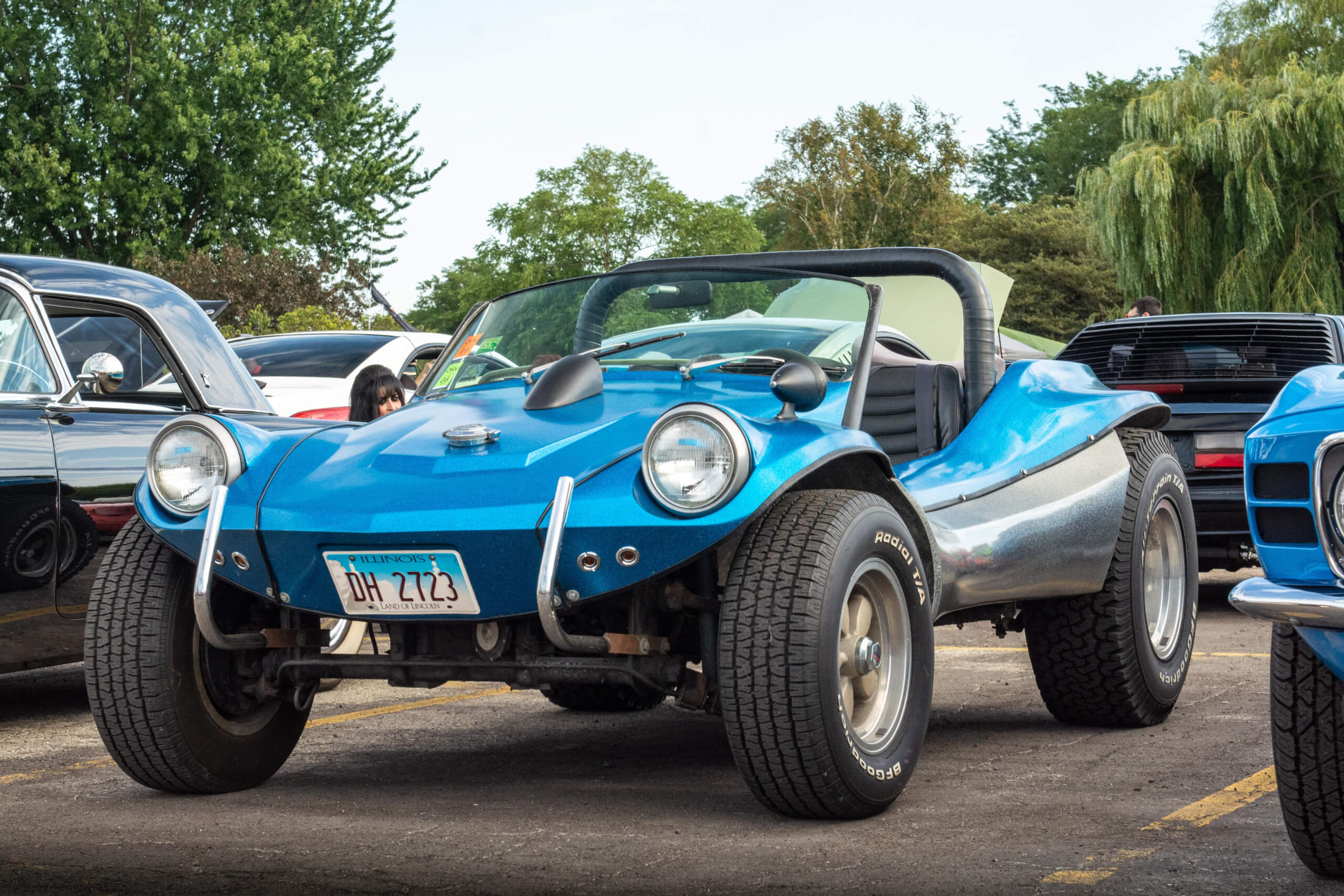 In 1966, Daniel Hanes’ parents went car-shopping. They ended up at Volkswagen dealership near their Chicago southside home. There, they bought themselves a shiny new Volkswagen Beetle. Sadly, the light blue Bug didn’t last long. In 1968, Daniel’s older brother wrecked it on a gravel road. “Coming around a blind curve, he found someone was parked in the middle of the road,’ recalls Daniel. “He swerved to avoid them, slamming into a light pole.”

Instead of getting rid of the two-year-old car, Daniel’s dad hung onto the salvaged heap. “Dad saw the exploding dune buggy craze. He also saw he had a wrecked Beetle that was mostly mechanically functional,’ said Daniel. “He decided to put two and two together and complete a project.”

Out in the family’s driveway, he set to work, aided by a fourteen-year-old Daniel. “We removed the stock metal body and dad found a cheap Manx-style fiberglass body,’ said Daniel. After the vehicle was completed, the father-son duo set off, taking off to camping trips along the Michigan coastline, as well as cruising around the city.

The fun only lasted for a few years. “Somewhere along the way, we wrecked the dune buggy,’ laughs Daniel, who owned numerous other Volkswagens during that time. The body was sold off and there in his parents’ driveway, sat the forlorn chassis.

Finally, in 1975, Daniel got inspired to tackle a new project. Finding another dune buggy body was becoming problematic. The fad had passed and suppliers in Illinois were hard to come back. After giving it some thought, Daniel concluded he knew just the place to find one: California. He loaded up his green 1968 VW bus and set out west to the Golden State. “I took a bunch of magazines that had ads for company’s selling bodies,’ recalls Daniel. “Once I arrived there, I just kept driving from one address to another, trying to find a company still in business.” He finally ended up in Burbank, at Glass Enterprises of Burbank, and only a stone’s throw from the big feature film studios.

No Body In Stock

While the company was still in business, they had moved on from building buggies to fabricating storefront signs. “The guy had his own design called the ‘Bounty Hunter’,’ said Daniel, who really liked its aggressive styling. “He didn’t have any made nor any ready in stock. After seeing my interest, he said he still had the molds and could create me a new one.”

Daniel commissioned the build and selected its impregnated gel-coat to be a brilliant metallic blue. He plunked down the needed cash and left for several weeks, bumming around the sun-soaked coast. He returned to pick up the freshly cast body, quite pleased with how the sparkling piece turned out. He hoofed it up to his bus’ roof, strapped it to the rack and embarked on the cross-country journey home.

After arriving in the Windy City, he headed to his place, a new house he bought just one door down from his parent’s home. He wheeled the family’s banged-up Beetle chassis over to his driveway and once again, set to work, building a custom buggy. “I came up with different things,’ explains Daniel. “All the little touches are my own design.”

He mixed and matched different manufacturers’ parts to his liking, incorporating such things as Toyota headlights and taillights, a hood-mounted tach and a Dodge Charger gas filler tube. “You fill Beetles with gas on the passenger side,’ said Daniel. “I found that when taking left turns, fuel would slosh out.” To remedy the issue, he plugged the hole with a VW horn center cap. From there, he welded in a new fuel tank and cut a hole in the center of the buggy’s hood. He then routed in a fuel filler neck and cap from a 1969 Dodge Charger and found the problem solved.

He also added American Racing wheels, with much larger sizes in the rear. “I really wanted them big,’ said Daniel. “It was important to me that the car sit just right.” The enthusiast also added an engine from a 1970 Beetle, which was a little larger.

Thrown a Curve: A French Windshield

One of the more unusual items on the car is the curved windshield, something seldom seen on these beach cruisers. “Most of the kits just use a flat piece of glass, which is very inexpensive,’ explains Daniel. “When I bought the body, the guy said he made it to accept a curved windshield.” The builder didn’t intend for just any curved windshield but one from a 1957 through 1963 Renault Dauphine. “When he told me that, I was pretty apprehensive, worried if I ever broke it and had to find a replacement piece,’ said Daniel. “All that aside, I really like it. It gives it a much more unique look.” Speaking of unique looks, a few months after starting the build, he called his bud at Glass Enterprises to order additional pieces for his car. “I wanted a black roof panel and also the silver side panels,’ said Daniel.

Taking it to the Dunes

Once he had the project completed, he wasted no time ferrying his kids around or running quick errands. After the transmission synchros went out, he pushed the car into his garage and let it sit, while the family man focused on other priorities.

Finally, in the early 2000s, he had time to properly go through the mechanicals and get everything running once again. “Dad did get the chance to see it one last time and it brought a smile to his face,’ recalls Daniel. Another priority for him was putting the custom creation to the test and running it out the dunes. In 2008, he headed to the Warren Dune State Park, located near New Troy, Michigan, for a proper field test. “I went on every hill I could find, just to make sure it could really drive on them,’ chuckles Daniel. “It is, after all what these things were built for.”

Daniel Hanes is still driving the dune buggy he built himself in 1975.

Daniel Hanes is still driving the dune buggy he built himself in 1975.