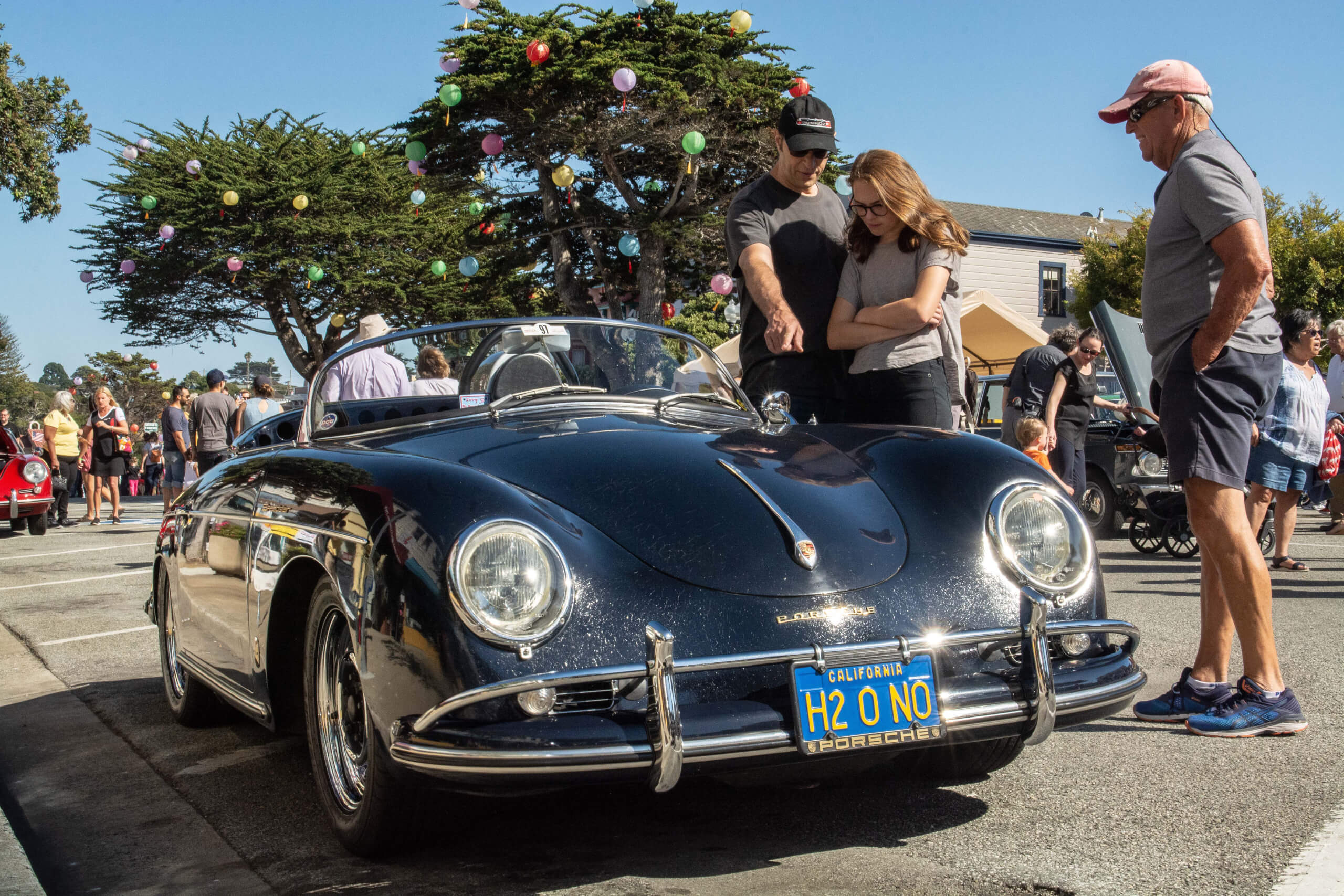 Steve Raucher’s dad, Bob, was a huge Porsche 356 enthusiast. In 1965, he bought a silver 356 SC coupe new right from the factory. Naturally, he’s loved them ever since. That’s why in the winter of 1974 he jumped on a hot tip. A pal told him about a ‘good one’ for sale in the mountains of Colorado. Leaving the Raucher’s home in Los Angeles, he flew out to Boulder, accompanied by his daughter, Marla. “He liked everything he saw about it,’ explains his son, Steve, who now cares for the vehicle. “The car was perfect. He paid $4,600 for it – nearly twice what Speedsters were going for at the time.”

The car is one of about 4,150 Speedsters built between 1954 and 1959. They were imported through New York, by way of well-known businessman, Max Hoffman. Many made their way into the hands of avid racers. The typical engine was the overhead-valve, four-cylinder boxer pushrod motor (rated at sixty horsepower). Some one hundred and twenty came with a more desireable race-inspired four-cam ‘Carrera’ engine. These also received two spark plugs per cylinder as well as two distributors.

Bob’s new ride had been sold new at a dealer in Honolulu, Hawaii. It spent its first ten years with an owner who happily motored around the Aloha State. From there, it was sold and headed off to Colorado. When Bob got it, it was still wearing its original Ruby Red paint and in stunning Concours-ready condition. That didn’t stop the enthusiast from wanting to enjoy the new purchase.  Instead of trailering the precious piece, he and his daughter road-tripped home, even driving through some winter snow.

Steve remembers taking memorable trips with his dad, cruising to area car shows or to Thunder Hill Raceway. All that father-son, fuel-fed fun was cut short, though, interrupted by dubious folks with a case of sticky fingers. “We went across town to look at some Porsche parts but both got bad vibes about the area,’ recalls Steve.

A few days later, Bob took the car to his barber to get his hair cut. When he came out, the Speedster was gone. “Reviewing details about the last couple of days, we both recall seeing a white 356 following us around,’ said Steve. They then remembered it being parked at the sketchy house. Putting two and two together, the pair realized there might be a connection.

Bringing Down the House

The super sleuths relayed their insight to the local authorities who ran a sting operation on the property. Sure enough, the cops confirmed it was a hideout for the Porsche-grabbing crooks. “It ended up being a bigger ring, ‘said Steve. Thieves were taking 356s from around L.A. and disguising them at a shop tucked away in the Santé Cruz mountains. After performing quick overhauls, they’d resell them in the San Francisco bay area. Thanks to the work of the Raucher boys, the whole illicit operation came crumbling down. Unfortunately for Bob, when the house and shop were raided, their glorious red Speedster didn’t turn up.

A Find in Frisco

Fearing it was gone forever, it took many more months for the family’s car to be located. Detectives pieced together evidence and learned the vehicle had gone through the crook’s backdoor system. Police tracked down its San Fran whereabouts and confiscated the vehicle, no doubt to the dismay of its ‘new’ owner.

It was then rightfully returned to Bob. While thrilled it was safely home, it was readily apparent the car was stripped of its once show-stopping status. In an effort to mask the true identity, the thieves hastily cut out its VIN plate and removed the bumpers. They also flared the rear fenders and painted the car a Mercedes blue. “Dad decided to leave the car as is in it’s ‘outlaw’ form,’ said Steve, who inherited the vehicle when Bob passed in 2015. “He was on the frugal side and heartbroken even when he got it back. From then on, just maintained the mechanicals.”

Since taking over ownership, Steve has made a couple of modifications to his now ‘outlaw’ 356. He added a larger sway bar and swapped out its Fuchs wheels for larger aluminum wheels. Disc brakes were added along with an engine from a 1966 Porsche 912. The interior has been redone, too.

Just like his father, he’s also a fan of getting behind the wheel and logging some smile-making miles. “It’s a track car for the street,’ gushes Steve. “It makes a lot of noise, goes fast and handles extremely well.” One of his favorite spots to drive is carving through the mountains of La Honda, California. “The roads there are fabulous,’ said Steve. “You can open it up and see how the car really scoots.”

Driving Justice: The ‘Outlaw’ 356A Speedster That Took Down Thieves