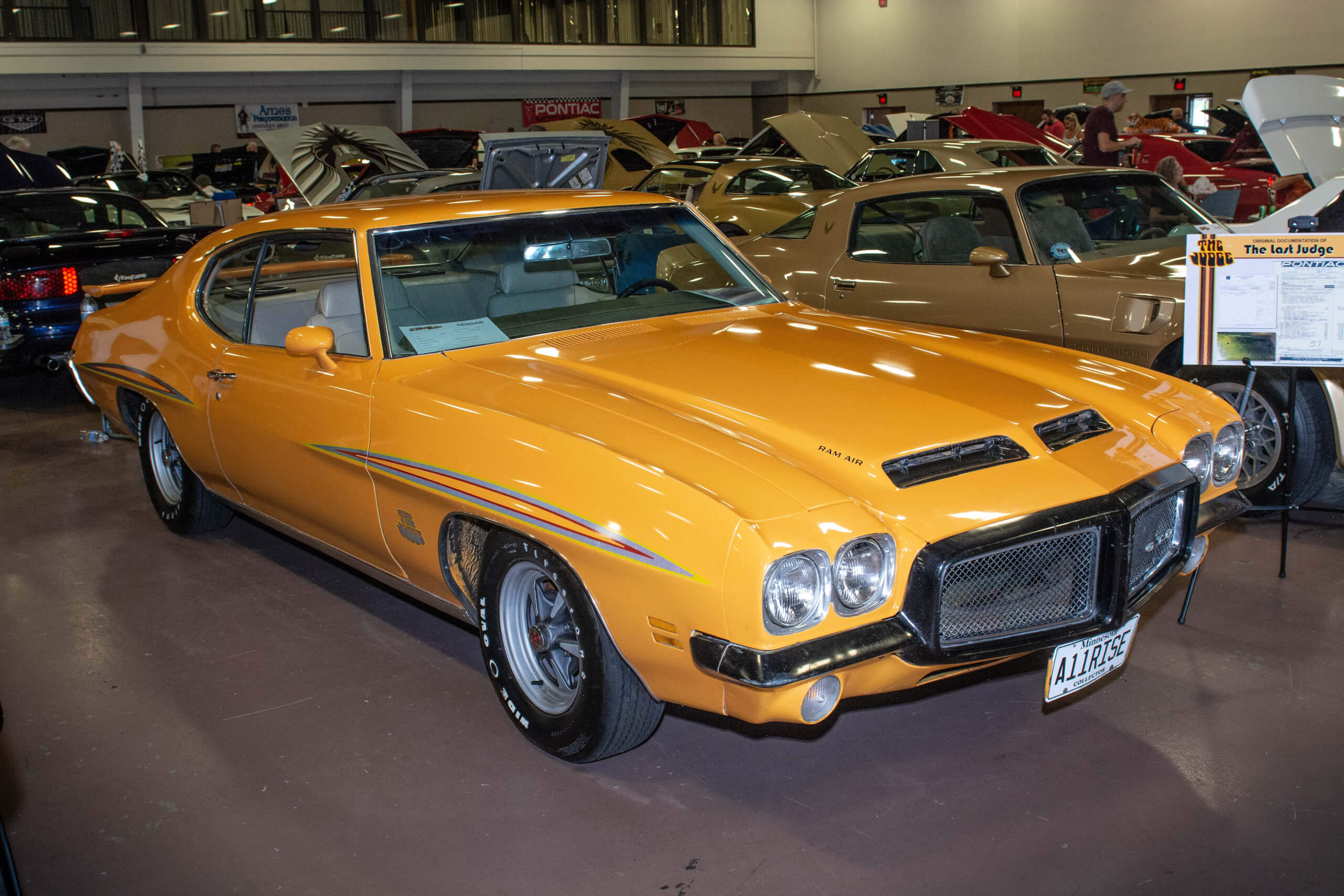 In the winter of 1971, Wayne Hagen caught wind of some rattling news: the Judge was retiring. In this case, no political figure was stepping down but rather Pontiac’s sportster of the same name. “He wanted one his whole life but couldn’t swing it financially,’ recalls his wife, Mary. “Realizing this would be his last chance to get one, he figured he should get moving.”

The Hagens were living in Minneapolis, Minnesota, and Wayne was just about to enter his final year of veterinary schooling. Dealing with high educational costs, he asked his then finance to make the purchase. “We had the wedding already planned and I had my ring,’ laughs Mary, thinking back to the big request. “It was quite thrilling to buy such a car.” Up until then, she had never even owned a car, let alone buy one. “I walked to my job as finding parking downtown was terrible,’ said Mary, who also relied on the city bus for shopping or other trips.

A Special Appeal: Buying the Judge

In April of 1971, the lovebirds swung by Hansord Pontiac, in Minneapolis, only to be greeted with a terrible announcement: they were too late. “The sales staff said sadly we had missed the boat in getting in an order,’ recalls Mary. Officially, the Judge was discontinued in February and here it was nearly a month later. “We told them we weren’t interested anymore and started to leave,’ said Mary. “Before we could get to the door, they said they would call up Pontiac and ask if they’ll make one more.”

Further pressing their luck, the Hagens had a special request: the car needed to be painted in their favorite color, Orbit Orange. “We had to have one in that color, we just loved it,’ gushed Mary. Easier said than done, that vibrant hue was no longer available for the 1971 model year. Still, eager for a sale, the dealership put in a special paint request to make it happen.

When it was all said and done, the vehicle’s price rang up at a hefty $4,862.23. The Hagens left a down payment, went home and eagerly awaited the arrival of their muscle machine. “A few weeks later we got a call from the Hansord staff saying things had changed and it wouldn’t be possible for our Judge to be built,’ said Mary. “We were disappointed and reluctantly asked for our deposit back. That seemed to motivate them to work harder to get it to happen.”

Finally, word arrived the new car was delivered to the dealership but with a catch: it had been painted white. “Again, when we got the call we asked for our money back as all we really wanted was orange,’ said Mary. “They offered to paint the vehicle in their bodyshop and that worked just fine for us.” A few days later the couple was notified the color change was complete. On May 18th, the Hagens hastily hurred to Hansord to finally pick up their shiny new Pontiac. “Wayne was so happy,’ said Mary. “He finally had his dream car.”

Come to find out, the vehicle had been painted Orbit Orange from the factory. In recent years, some local enthusiasts helped Mary remove the front seats to inspect the overspray. They did in fact, find orange paint. As for the mysterious white GTO Judge that arrived at the dealer lot? The jury is still out and showing no signs of return anytime soon. “It wasn’t there when we picked up our car. We were so happy with our orange Judge, we never thought much about it,’ said Mary. The different color conversation doesn’t stop there. “So many people who see the car now ask about the black grille,’ said Mary. “That’s how the car arrived, and we never knew it wasn’t correct or off. We thought it looked great.”

Wayne put their new ride right to work, continuing to drive to classes. In the fall, the couple was wed but took an extra precaution with the Pontiac: they hid the car. “We didn’t want any of our wedding party adding tin cans or decorating the car,’ chuckles Mary. “We told everyone to back off.” That was good thinking as immediately following the ceremony, the couple cruised off in the classic towards their honeymoon destination. They motored many hours west, ending up in Wyoming and camping in the Grand Tetons.

Once back home, big changes came in for the new family just a year later. Wayne opened his own veterinary practice and purchased a new 1972 Chevy pickup truck, buying it from Roth Chevrolet GMC in Willmar, Minnesota. The color he and Mary selected for it? Orange. “That dealer didn’t want to sell us it either,’ laughs Mary. “They were so baffled why we wanted it. They claimed it looked like a highway safety department truck.” Wayne needed a more robust set of wheels as he cared for larger animals. Usually, he was coming to them, traveling onsite to area farms to provide care.

With the hauler in hand, Wayne wasted no time in putting it to regular use, leaving Mary the Judge. She was working with Wayne at their clinic and besides that local commute, used the classic for around-town errands. With the truck limited on interior space, the Pontiac became the family hauler. A popular summer spot they’d be found was at the local drive-in movie theatre. “We’d take our daughter, Heather,’ recalls Mary. “She’d be in the back seat with a big sack of popcorn and our basset hound, Lucy.”

As the 1970s waned on, the growing fuel crisis became a big concern. “We liked to go to the Twin Cities a lot, which is a two-hundred-mile round trip,’ explains Mary. “We could get almost there on one tank but just out of the city we’d run out of gas. It became a real hassle as the stations all closed at 7 pm.” While most muscle car owners began to ditch their rides for more efficient imports, the Hagens hung onto theirs. “We knew it was a special car and had a nice garage,’ said Mary. “We knew we’d never be able to part with it.”

The Judge was parked but Wayne and Mary didn’t give up on Pontiac, nor their performance offerings. In 1980, they headed to Vern Johnson Motors in Paynesville, Minnesota, to buy a new Trans Am, which they also still own today. After nearly thirty-five years of prolonged sitting, the Judge finally received revived interest from the Hagen’s youngest daughter, Holly, and her husband, Scott. “Growing up, I heard so many stories of this car over and over,’ gushes Holly, who never had the chance to ride in the car while she was little. “It clearly was very special.”

This isn’t the enthusiast’s first time round with a hopped-up ride; in high school, she drove the family’s TA. “The Trans Am was much redder in color and as a little girl, I always wondered why they picked this color for the Judge,’ said Holly. “Now, I just love it. I’d pick it in a heartbeat, too.”

Sadly, as Scott and Holly were in the process of digging out the Pontiac and getting it running, Wayne passed away. “He never got to see it driving,’ said Holly. “Dad would have loved to, though.” Many others have, as in the last year, Holly and Scott have made a point to exhibit the family’s special vehicle. It debuted to the public for the first time at the 2018 Muscle Car and Corvette Nationals, held in Rosemont, Illinois. They also had it at the 2019 Indian Uprising All Pontiac Weekend car show, held in St. Charles, Illinois. Back home in the North Star State, it’s usually out at a local cruise night or car show. “It drives so great and gets so much attention,’ said Holly. “Even inside our house with all the doors shut, I can always hear when Scotty fires it up.”