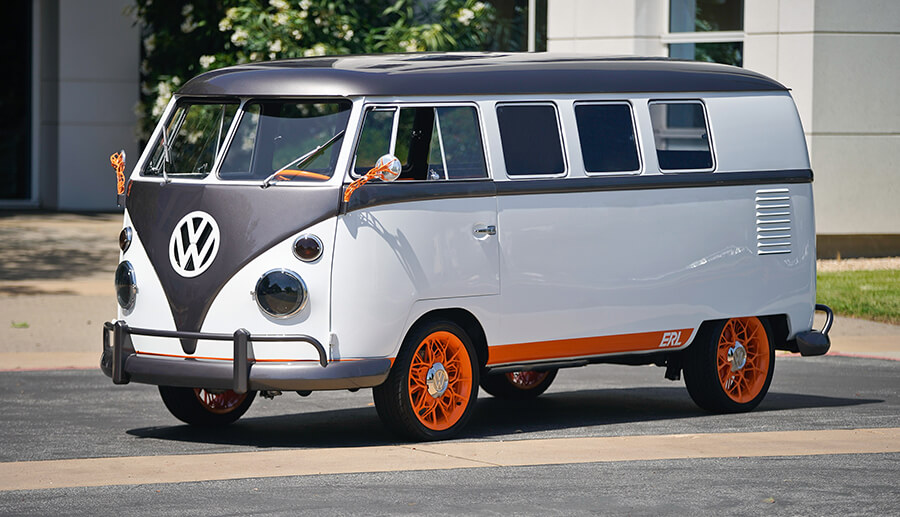 Volkswagen’s in-house innovation center is getting a new name and expanded role with the aim of driving the automaker further into the future. The group will now be called the Innovation and Engineering Center California (IECC) and will be the largest VW research facility outside of Germany. To celebrate their twenty-plus years of cutting-edge tech and to showcase just what they can do, the IECC unveiled their latest concept creation – a modernized 1962 Type 2 microbus.

They’re calling it the Type 20 and the reborn hauler has a full BEV (battery electric vehicle) drivetrain, including a 10 kWh battery, onboard charger, and electric motor. Volkswagen didn’t release any real-world figures or estimates, other than the setup produces 120 horsepower and 173 pound-feet of torque.

A custom air suspension, developed in conjunction with Porsche, adjusts the vehicle’s ride height via software. Besides being vastly improved over the stock chassis, it’ll allow the bus to do such things as raise when a driver approaches.

In Your Face: Biometric ID

Looking to the limits of what might be ahead, the team incorporated biometric ID technology into the vehicle. A 720p wide-angle camera in the driver’s side window frame a has real-time facial recognition system. It’s tied into the onboard digital assistant and could provide keyless access and other vehicle functions. To speak to that assistant, there are three zones (front exterior, driver cockpit, and rear passenger zone) of microphones, allowing passengers to connect with that helper. When commands are given outside the bus, the system provides feedback in the form of LEDs, mounted in the headlights and center VW logo.

The custom web-like wheels, rearview mirror supports, and other interior elements were created in Autodesk and use generative design –  a process that focuses on maximizing strength while minimizing weight. To further draw attention to them, they were all painted in neon orange paint.

The vehicle’s center dash has a holographic display that generates 3D images without the need for specialized glasses. If rolled out on production vehicles, this could open a whole world of new and exciting vehicle controls and data presentation.

The Type 20 bus will be put on display at the IECC’s Silicon Valley facility, alongside other past prototypes and other historic vehicles. The two-tone classic certainly features some outside-the-box thinking and tech and it’s hard to know exactly which, if any, of these technologies we’ll see on upcoming VW vehicles. One thing is clear, the brand is certainly getting ready for the future.