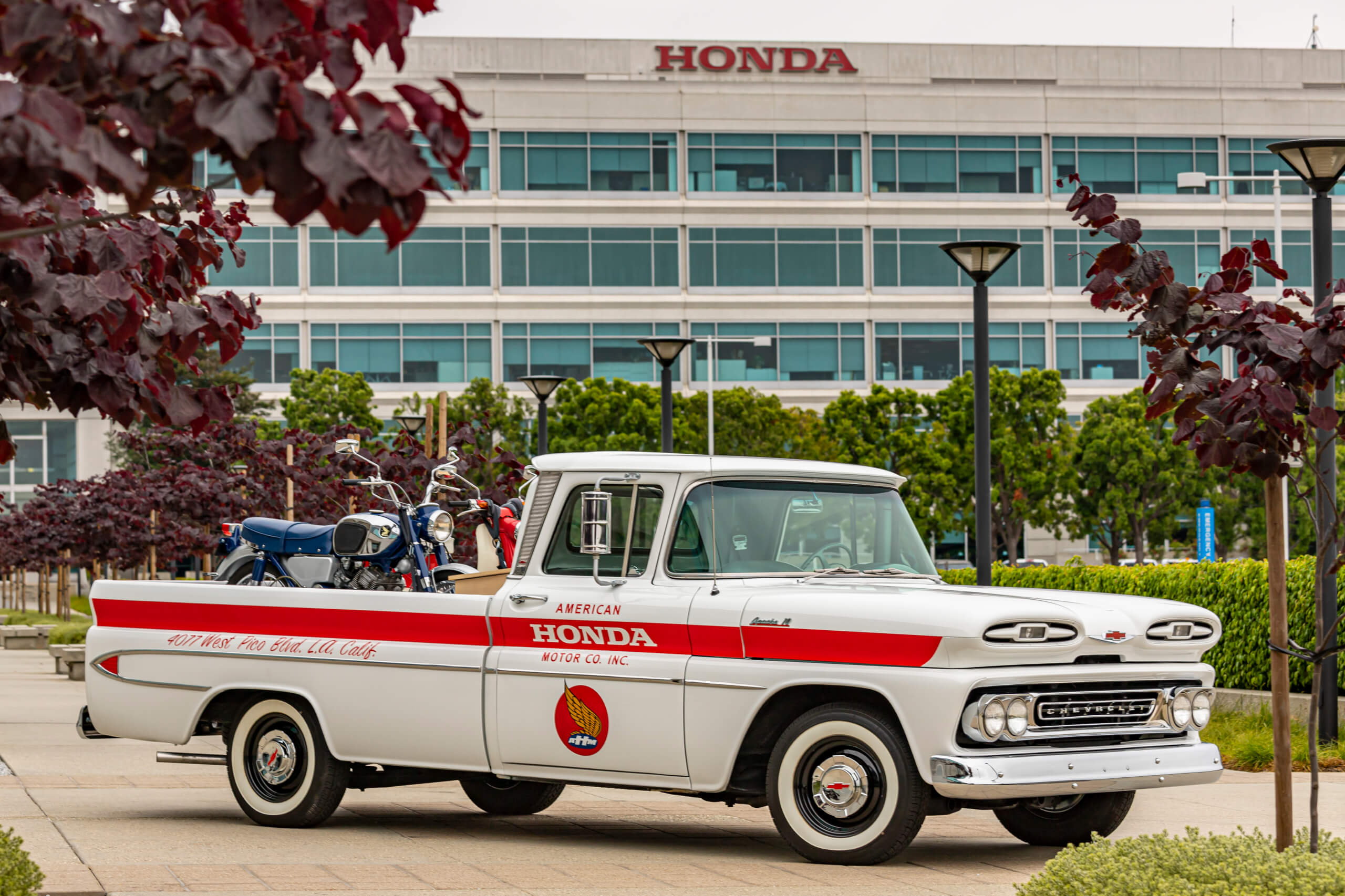 After Honda launched in North America in 1959, one of their first steps was purchasing a fleet of ten Chevrolet pickup trucks. They were put right into service, being used by company sales staff to deliver the brand’s motorcycles to dealers around Southern California, not far from Honda’s Los Angeles headquarters.

The push to move their two-wheeled products paid off and in a big way. By 1965, Honda was the best-selling motorcycle brand in America, commanding almost seventy-two percent of the market.

In celebration of American Honda’s 60th anniversary, the brand has built a tribute to those iconic haulers. A black and white photo taken around 1961 was used for primary reference. It depicts one of these red and white Chevys parked in front of the company’s original office, located 4077 Pico Boulevard. Retired Honda staff members were also interviewed to glean additional details and memories from the days with the Honda haulers.

With the whereabouts of the originals unknown, a suitable 1961 Apache was found and given a mild mechanical freshening. Under the hood of the half-ton is a 283ci V8, paired to a 3-speed manual transmission. The exterior was repainted white, just like the originals, and given hand-painted graphics, in the form of a red stripe along the beltline and company logos on the doors.

The finishing touch on the custom truck was loading up the bed with a pair of additional relics from Honda’s heritage: two vintage motorcycles. On one side is strapped a red 1965 Honda 50. Known also as the ‘Super Cub’, these little 49cc two-wheelers were affordable and easy to ride back in the day. They sold quite well, helping the brand establish their top spot in the marketplace.

It’s joined by a white and blue 1965 CB160, which is one of Honda’s first small-displacement sport bikes. This one was just restored last year and sports a 161cc engine and a 4-speed manual transmission.

Ahead of the retro motorbikes is a wooden tool chest, no doubt used by the drivers for carrying additional supplies and marketing materials.

The whole project was completed just in time to celebrate Honda’s 60th anniversary in America and 40 years of production in America, which will take place in September of 2019.

Touring Plans for the Chevy Truck

The truck will soon hit the road, traveling the country and taking part in various automotive events and shows. It’ll be displayed at the 2019 SEMA show and from there, make its way back to the American Honda Collection Hall in Torrance. There, it’ll be staged in front of a replica of the company’s original Los Angeles office.