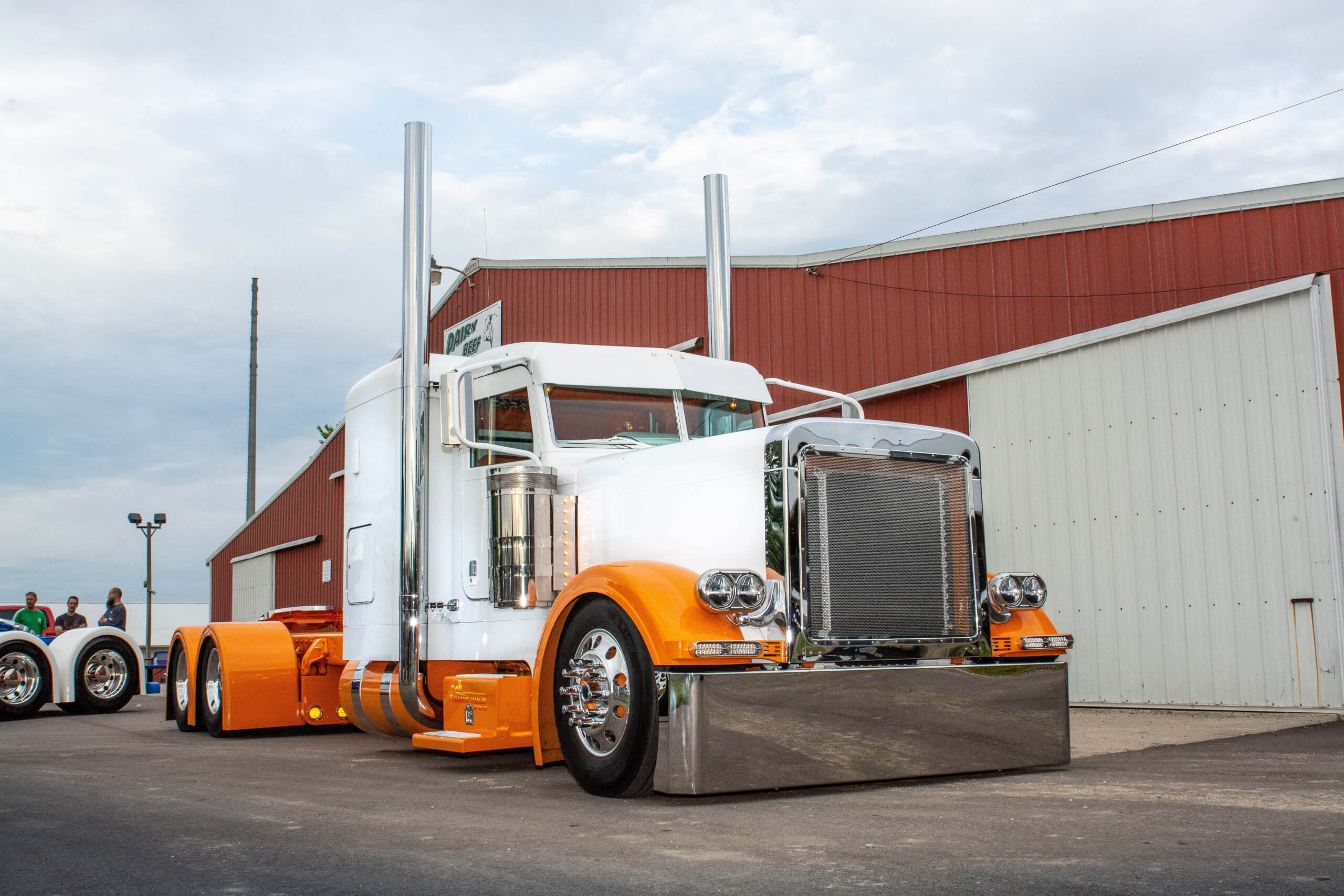 Whipping up ‘Dreamsickle’ wasn’t easy for Steve Sontag. The toughest part of putting together the eye-searing show truck wasn’t the fabrication, but rather pulling the 2007 Peterbilt 379 from use. “I bought in 2013, right after my company’s first year of business,’ explains Steve, who lives in West Bend, Wisconsin. The truck was the second vehicle Steve added to his fleet and a big part of his company’s growth. It stayed busy, running for three years to haul cars to such events as Mecum’s Chicago auction, held in Schaumburg, Illinois and the Kissimmee, Florida, auction, too. When the rig wasn’t pulling classic collectibles, it crisscrossed the country hauling refrigerated loads.

All that manual labor began to shift after a slight mod here and there crept in. That soon opened the floodgates for what would become a total transformation. “Once we started, it took on a mind of its own,’ laughs Steve.

To get things started, the Pete was gutted to its bare frame. The wheelbase was stretched from 270 inches to 312 and the fifth wheel attachment was scooted back to the rear edge of the frame. Suspension air bags were added to the front axle and wrap-around fender covers adorn each wheel.

While most everything is custom, the truck’s original and well broken-in Cummins 600 engine is still under hood. It shows over 700,000 miles but Steven did paint the entire block and accessories.

The powerplant’s hot hues matches the truck’s stark white and candy orange exterior. The truck’s name, Dreamsickle, came about just as you would might expect. “My team was sitting around one hot summer day eating the ice cream,’ said Steve. “It dawned on me that had to be the truck’s name.”

The scheme harkens to the truck’s origins as the Peterbilt was originally Omaha Orange and cream. Steve prefers the pure white look that he had seen on several other show trucks and went in that direction. “It just pops more,’ said Steve.

Inside, the vehicle’s cab was fully redone and now features an open concept layout. In the back there’s no longer a bed but an open, padded seating area, complete with TV.

This truck's cabin uses graphics, chrome accenting and three dimensional objects – not to mention bright colors – to draw attention to the floor. (Photo by Matt Avery)

This truck's cabin uses graphics, chrome accenting and three dimensional objects – not to mention bright colors – to draw attention to the floor. (Photo by Matt Avery)

This custom semi is named 'Dreamsickle' after its sweet orange and white color scheme.

The project was competed just in time for the 2017 Mid-America Trucking Show, where it took home third place in the Limited Mile Combo class. Last year, Steve competed in the AMCAN Nationals and ‘Dreamsickle’ took the title of Grand National Champion.

Those are sweet wins and the kind of accomplishments that make the project totally worth it.