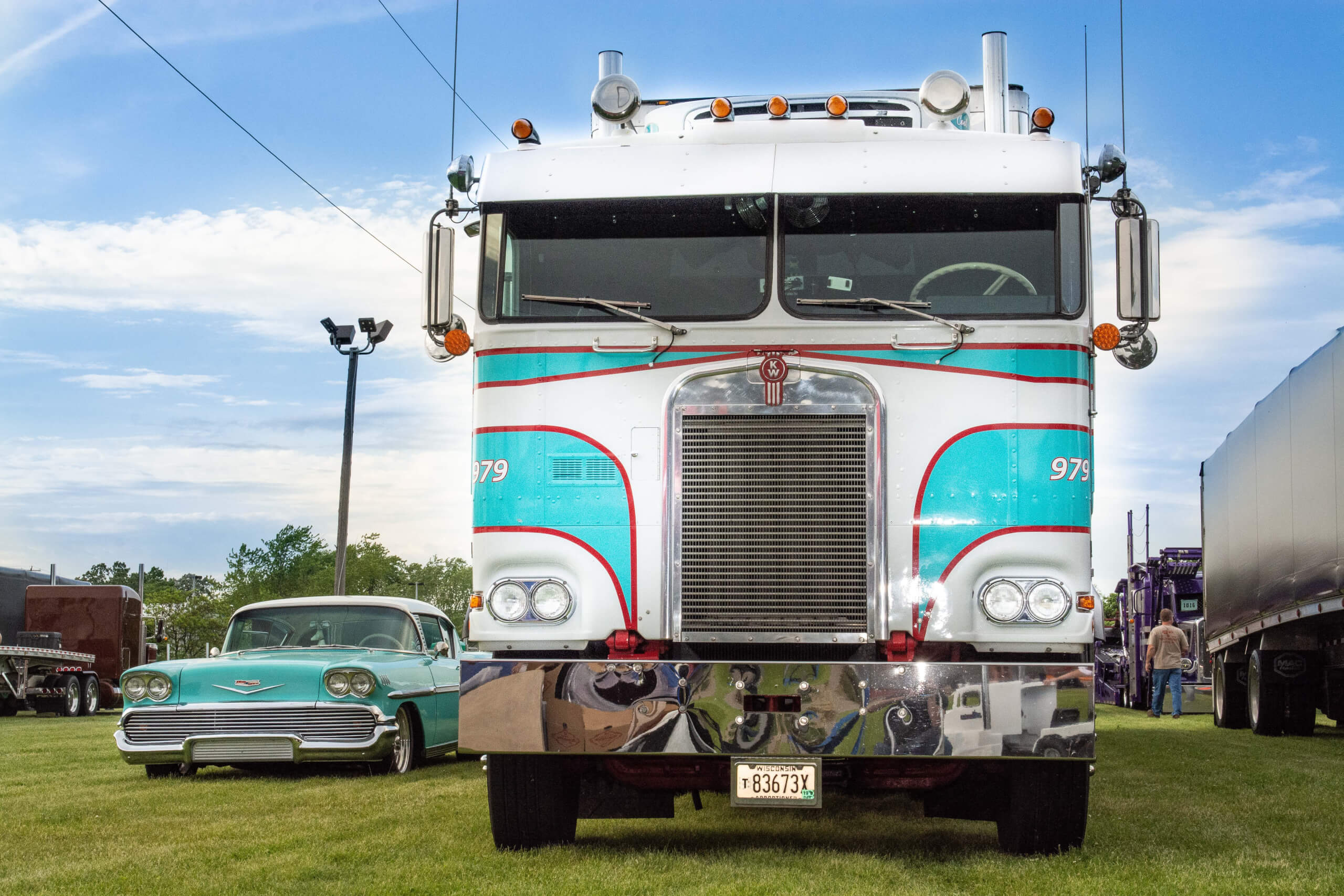 There was no way Pat Sullivan was walking away from purchasing his 1979 Kenworth K100. Afterall, it perfectly matched another vintage vehicle already in his stable: a 1958 Chevy Bel Air.

Pat found the two-toned truck through an online listing in 2017. The seller was located near Terra Haute, Indiana. While he hadn’t touched the truck in years, it had gone through most of its overhaul, including receiving its eye-catching paint and body work. The final white and teal getup was enough to get Pat going, pairing quite nicely with his classic car, which is painted in Tropical Turquoise, a 1957 Chevy paint color. “I knew they would look great together so I had to have it,’ recalls Pat, who lives in Salem, Wisconsin. Without giving it a minute more, he quickly made the purchase.

The longtime trucker has been driving for over forty years, using a Kenworth W900 for eighteen of those years to make weekly refrigerated dairy runs to Louisiana. After all those miles, he was ready for a retro rig that stood out.

Parked together, the combo makes for one striking combo. (Photo by Matt Avery)

With its charming looks, the retro Kenworth continues to turn heads. (Photo by Matt Avery)

Pat can still be found out on the roads, hauling regularly. (Photo by Matt Avery)

Despite the Kenworth being mostly complete, Pat still had a couple issues to hammer out. The mechanicals were gone through and dialed in and the interior was redone in black leather upholstery.

Pat uses the hauler regularly, having just returned from running a load to Virginia. “It turns a lot of heads out on the highway,’ laughs Pat, who also drove it all winter long on trips to and from Chicago.

Equally attractive is his Bel Air. Pat bought the coupe in 2010 from a seller in Michigan. Shortly after getting it home, he added air suspension and other upgraded components like disc brakes, air conditioning and all new wiring. He and his wife, ?, cruise all over, racking up miles on frequent summer drives to northern Minnesota and other Midwest destinations.

They weren’t the only Sullivans present at the AMCAN show. They were joined by their son, Pat Jr., and his wife. They brought out a special truck, too, bringing their recently completed 1953 Willys pickup.

Pat Jr. bought it from a seller in Chicago two years ago. “It came with a huge tank on it,’ recalls Pat. “It had been a water truck way out in the mountains of Montana.” The craftsman set to work on the overhaul, which was rough and quite the challenge. “Word to the wise: never buy a vehicle in the rain…and at night,’ laughs Pat. “By the end of the process, the top half of the vehicle’s sheet metal, including the whole bed, had to be refabricated.”

Despite the uphill battle, he wrapped up the project just a few months ago and brought it out to complete the family’s classic setup. This marked the first time the trio of vehicles had ever been displayed together.  “It’s so great to have them all, and us, together,’ said Pat. “That’s why we love this hobby so much.”