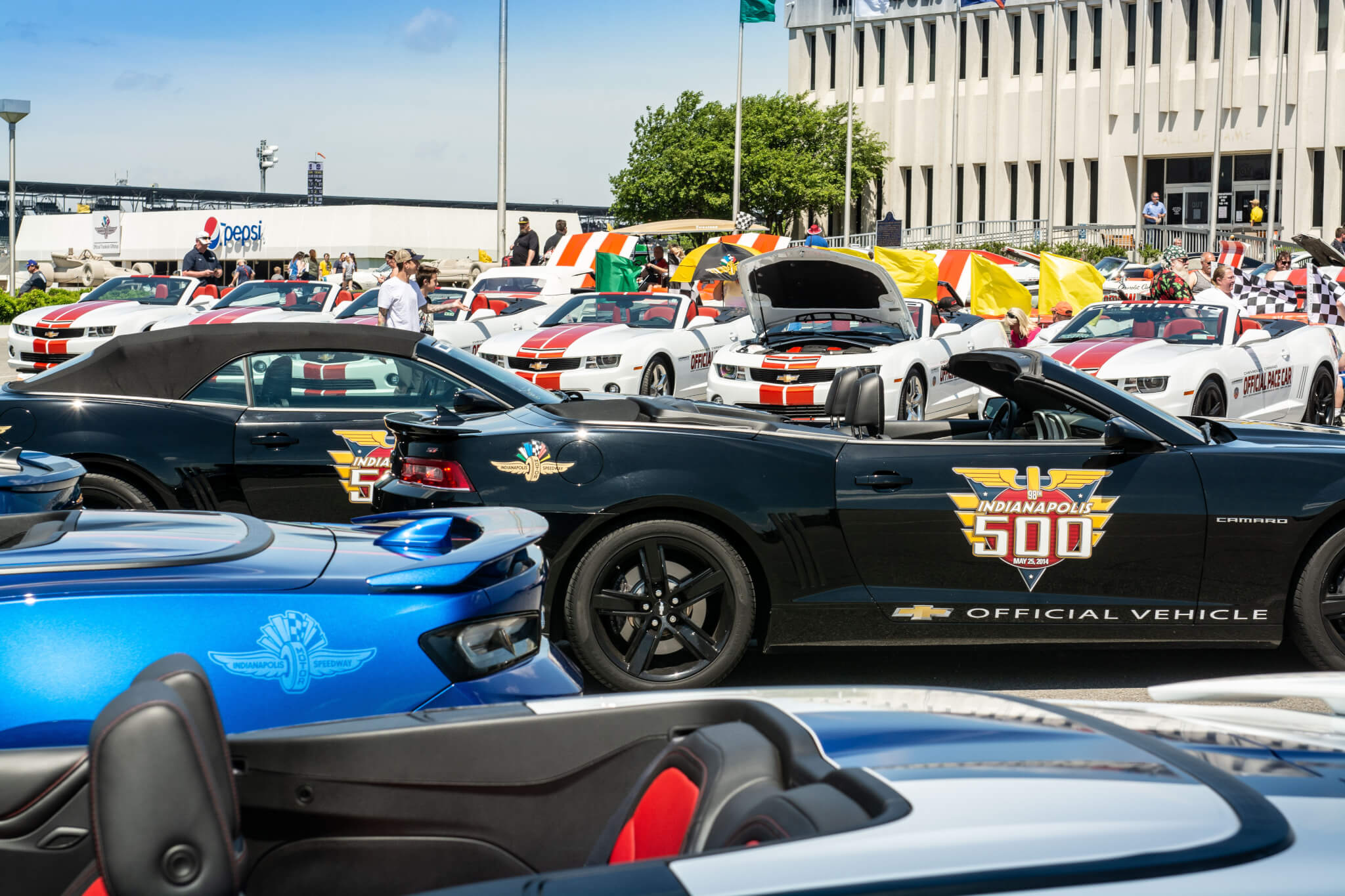 Camaro pace cars from all generations circled back to the famed Indy 500, taking part in the 2019 Camaro Pace Car Homecoming. The event took place on May 17 through the 19th and was hosted at the Indianapolis Motor Speedway museum, sponsored by Mecum Auctions.

Dozens of Camaro pace cars and festival cars were present, with participants and guests coming from all across the Midwest, East coast and Canada. Festival cars are vehicles that mimic the look and feel of the pace car but are used by officials, celebrities, public safety officers and others in preparation for the big day.

This homecoming’s celebration centered on the 50th anniversary of the iconic 1969 Z11 Camaro pace car. That year, the vehicle was a SS/RS convertible and vibrantly stood out, thanks to its Dover White paint and Hugger Orange Z28 stripes. The droptop’s cabin was equally eye-popping, sporting orange door panels and orange houndstooth cloth seats. As is the norm, two were built for track duties, with one functioning as a backup.

Both ’69 Pacecars Together with Mario Andretti

This event marked a worldwide first: the return of both of those classic Chevys together again on the Indy grounds. Pushing that experience over the top was a special appearance by Mario Andretti, who won in 1969. Andretti got hearts racing, visiting with excited owners, signing dashboards and retelling stories from his victory.

Another First: All Camaro Pacecars

The presence of the orange and white pair marked another never-been-seen before sight: the gathering in one place of all nine track-used Camaro pacecars. The museum brought out their entire collection, which includes the Camaros from 1982, 1993, 2009, 2010, 2011, 2014 and 2016. The final piece was a collector’s 1967 blue and white example, which was also onsite.

Other rare vehicles included a barn-find 1978 festival car, driven to the event from Virginia, a highly-restored 1969 L78 Canadian market car and a 2018 Grand Marshal car that carried race winner Will Power on his victory lap. All told, around eighty vehicles were on display.

A collectible civic event license plate (good for sixty days) was made available, along with a custom T-shirt.

The weekend activities concluded with a major win for the vehicle owners: a lap in their rides on the Brickyard track. The entire group went out as one and made their way around the legendary two-and-a-half-mile banked asphalt stretch. Feeling like champions, they crossed the starting-line bricks and returned infield, the ear to ear smiles making the perfect photo finish.