It’s been exactly one year since the great Golden Sahara II emerged, making a grand entrance at Dana Mecum’s 31st Original Spring Classic. Despite being out of the public’s eye for over fifty years, the wild custom car picked right up where it left off, wowing crowds and commanding attention.

After the auction concluded, the dust never settled for the dreamy show-stopper. As with any sensational star, this stunner’s last twelve months have been nothing short of action packed, full of glitz and glam, drama and excitement.

New Home at the Klairmont Kollection

Longtime collector, Larry Klairmont, had the winning bid and became the car’s proud new owner. He added it to his world-class collection, housed on the northwest side of Chicago. All summer long, it was displayed as-found-in condition, but Larry always longed to see the forward-thinking Sahara II, dubbed by media back in the day as the ‘Car of Tomorrow’, returned to its former glory.

Speakeasy Customs and Classics, a restoration shop located in Bedford Park, Illinois, was tasked with undoing the sands of time and overhauling the tarnished and tired piece. One of the key focuses was recreating the radiant exterior paint.

Back in the 1950s when the vehicle was coated in refrigerator white paint, a most unusual substance was included: pulverized and powdered fish scales. Jim Street, the car’s former owner, got the idea from a costume jeweler, who included the unique element in the painting of their plastic pearl necklaces. That gave them needed iridescence. It was a cool effect and one Jim wanted to replicate. The company’s supplier sent him some of the magic ‘pearl’ paste, which included the crushed scales. Jim and painter Bud West included the special mixture in the plethora of top coats applied to the Sahara II, giving the amazing auto a truly lustrous and other-worldly appearance.

While it dazzled when new, decades of time caused the clear lacquer finish to deteriorate and yellow. The Speakeasy crew stripped the bodywork to bare metal and applied a custom PPG mix paint color, bringing back that shimmering hue.

One of the overhaul’s more tedious jobs was removing each and every one of the over 3,000 dress-up cubes, adorning the exterior panels behind each wheel, headlight bezels and around the rear seat beverage station. “Every little block, which are radio push buttons from a ’57 Chrysler, had to be removed by hand, cleaned, re-plated, polished and reinstalled,’ said shop owner, Greg, who reports 600 hours went into the process. Each block was recoated in 24 karat gold, along other pieces like the exterior trim panels behind the wheels and the support bar across the rear window bubble. All of the plating was done in-house and included over $3,000 dollars’ worth of the precious metal. 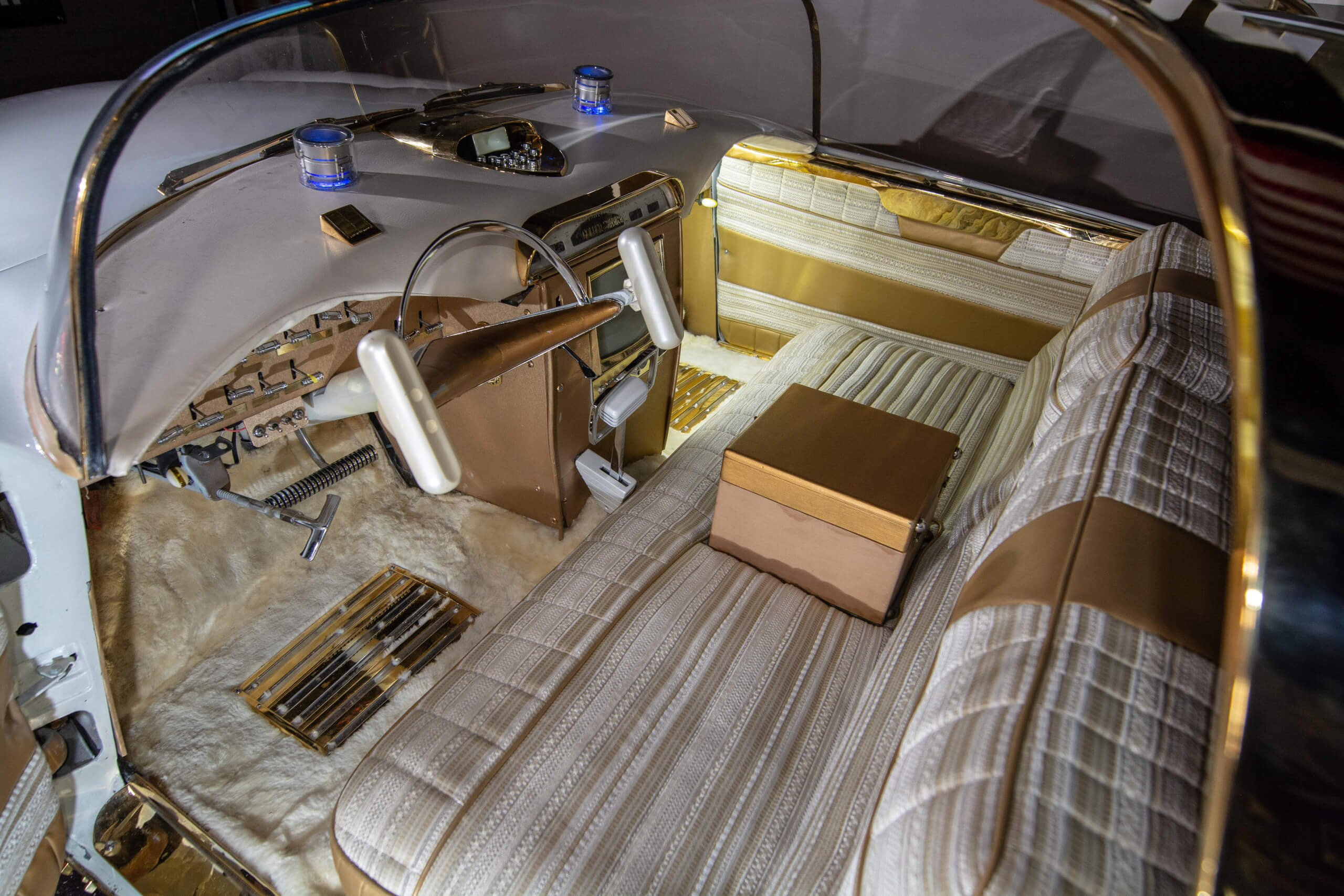 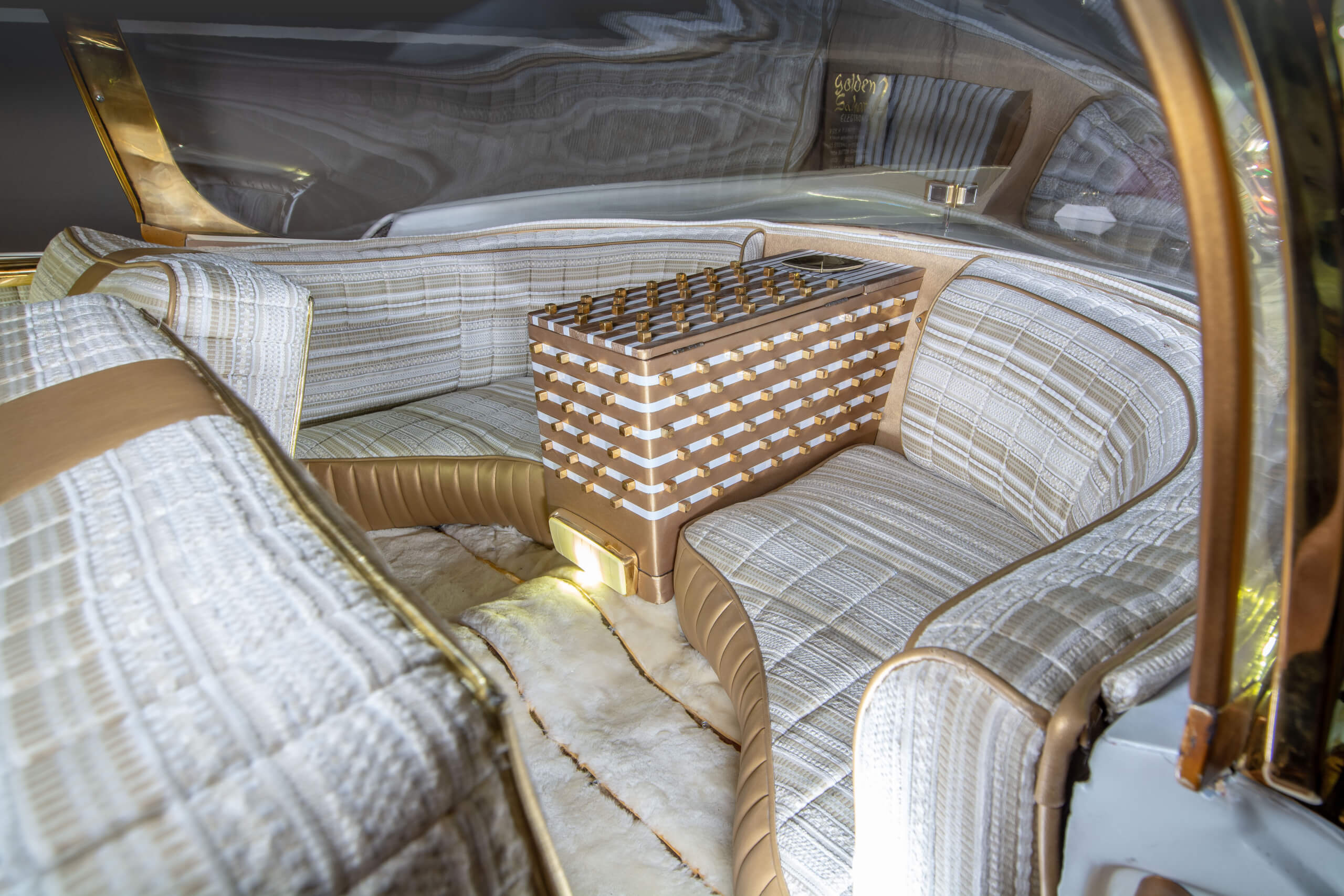 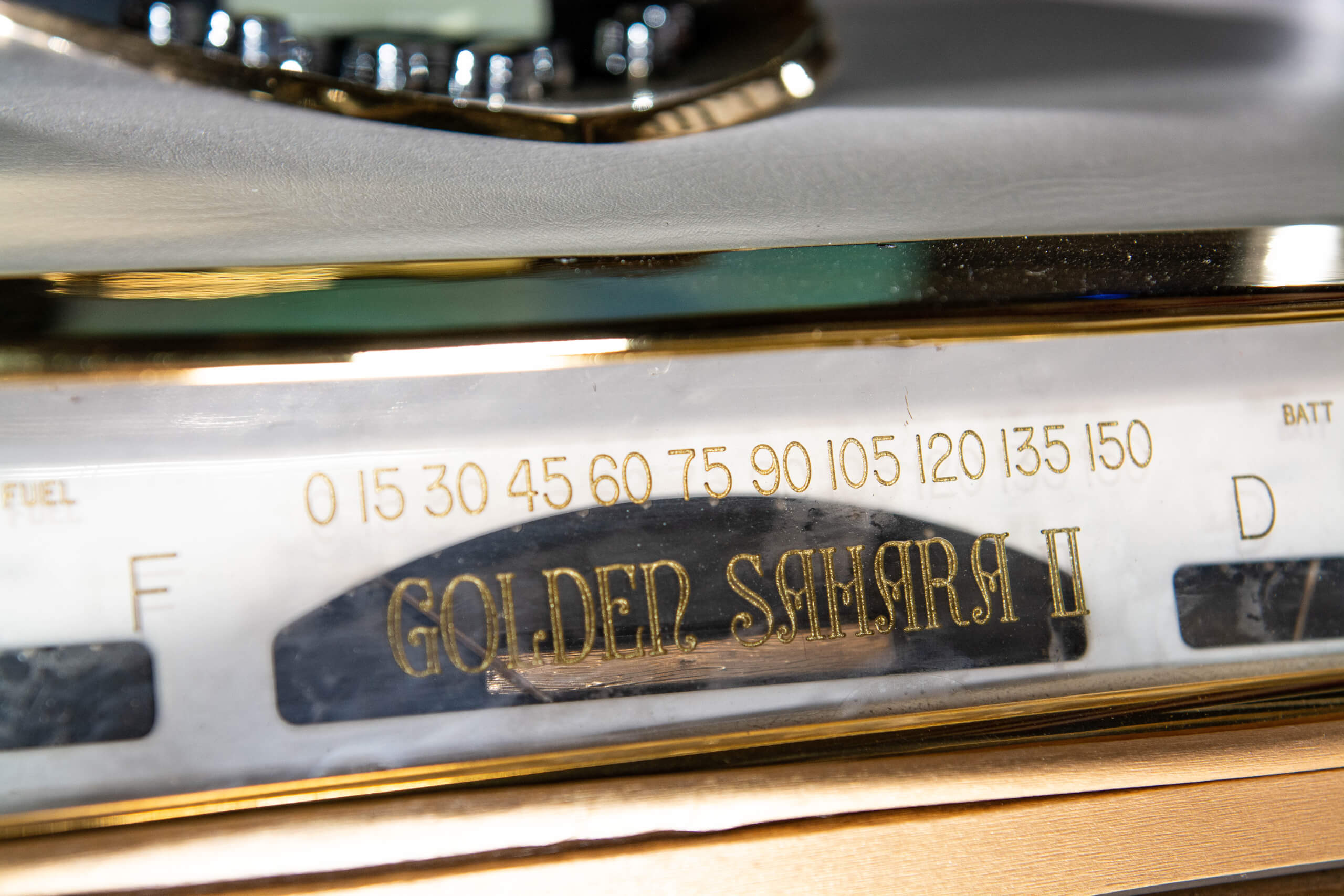 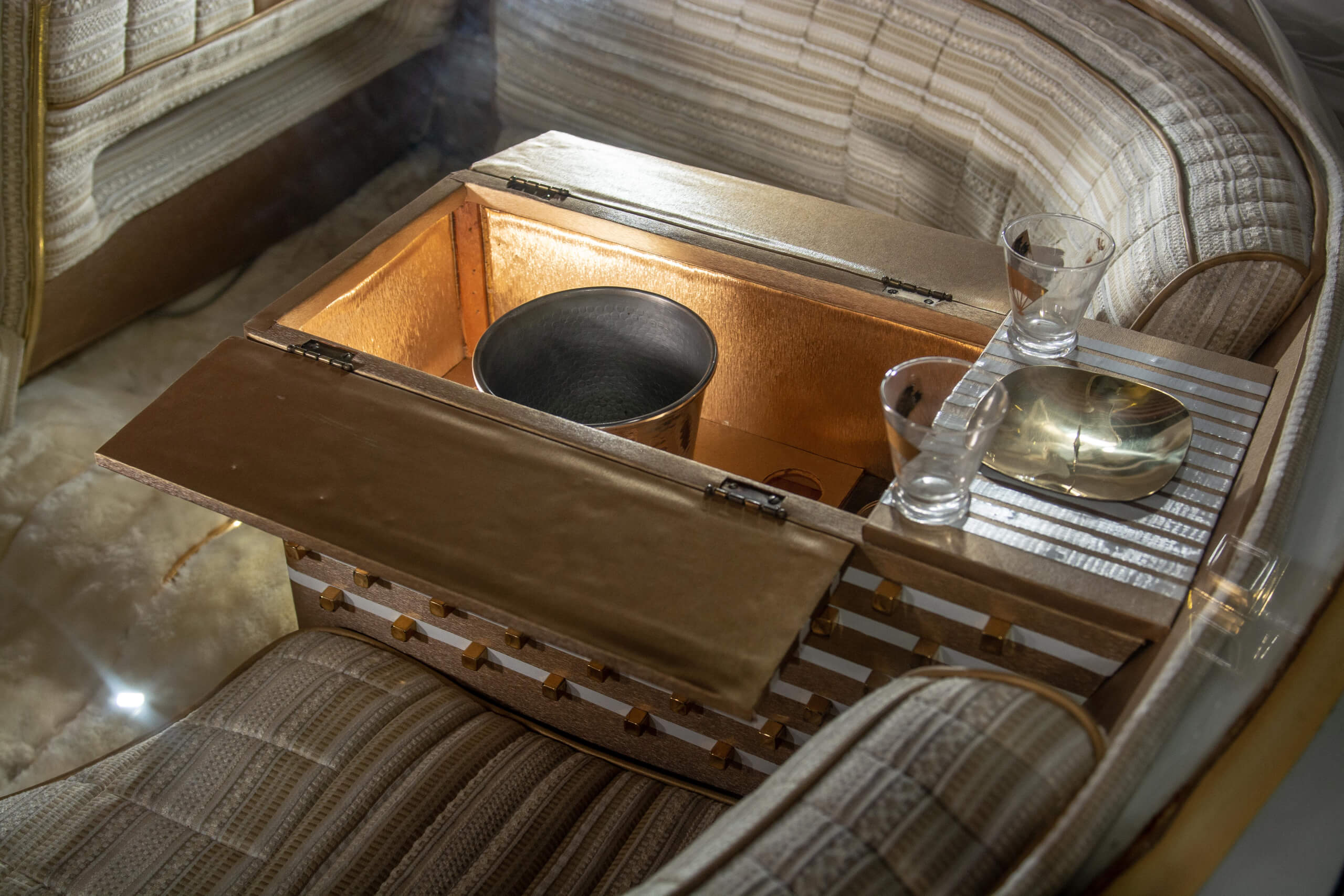 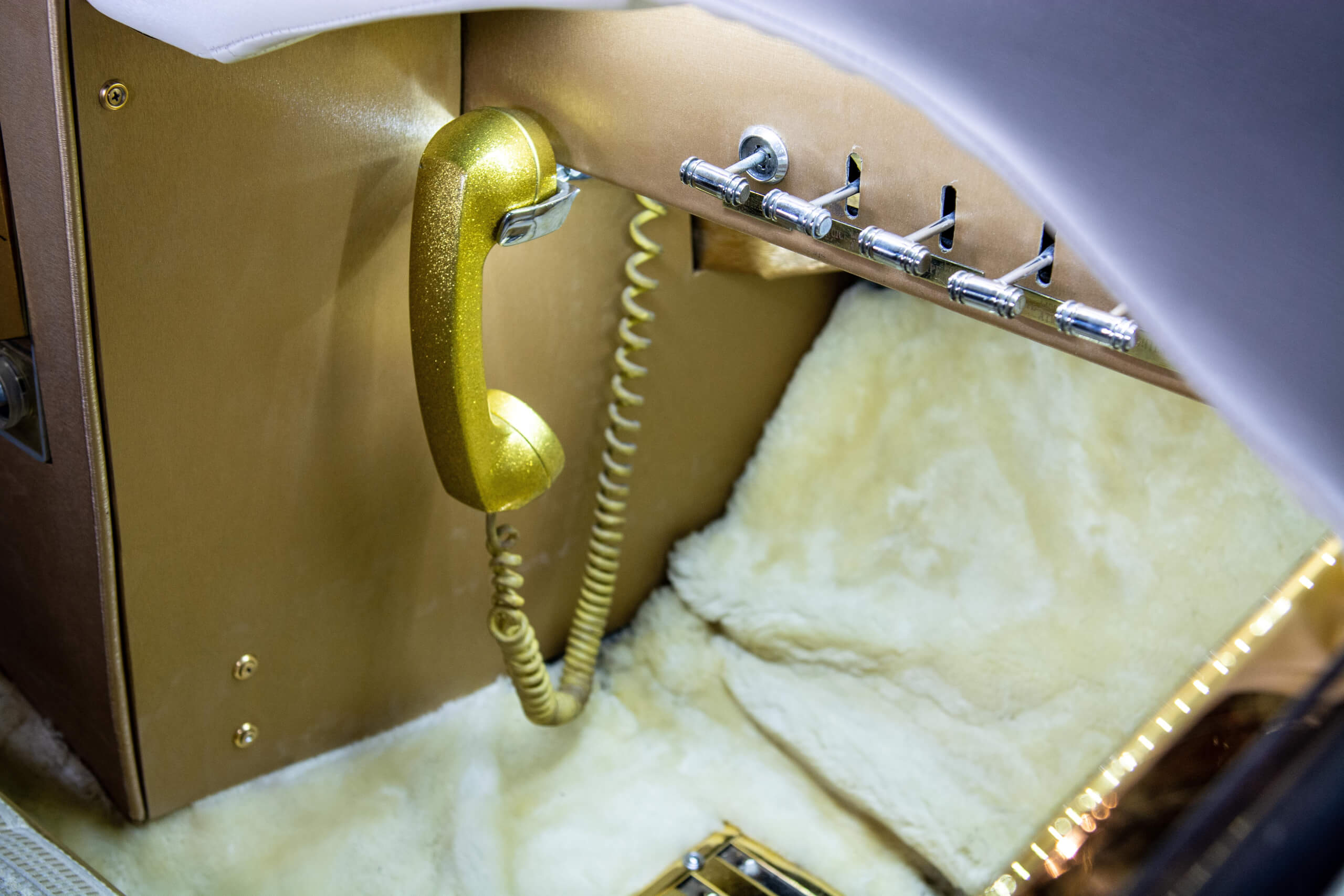 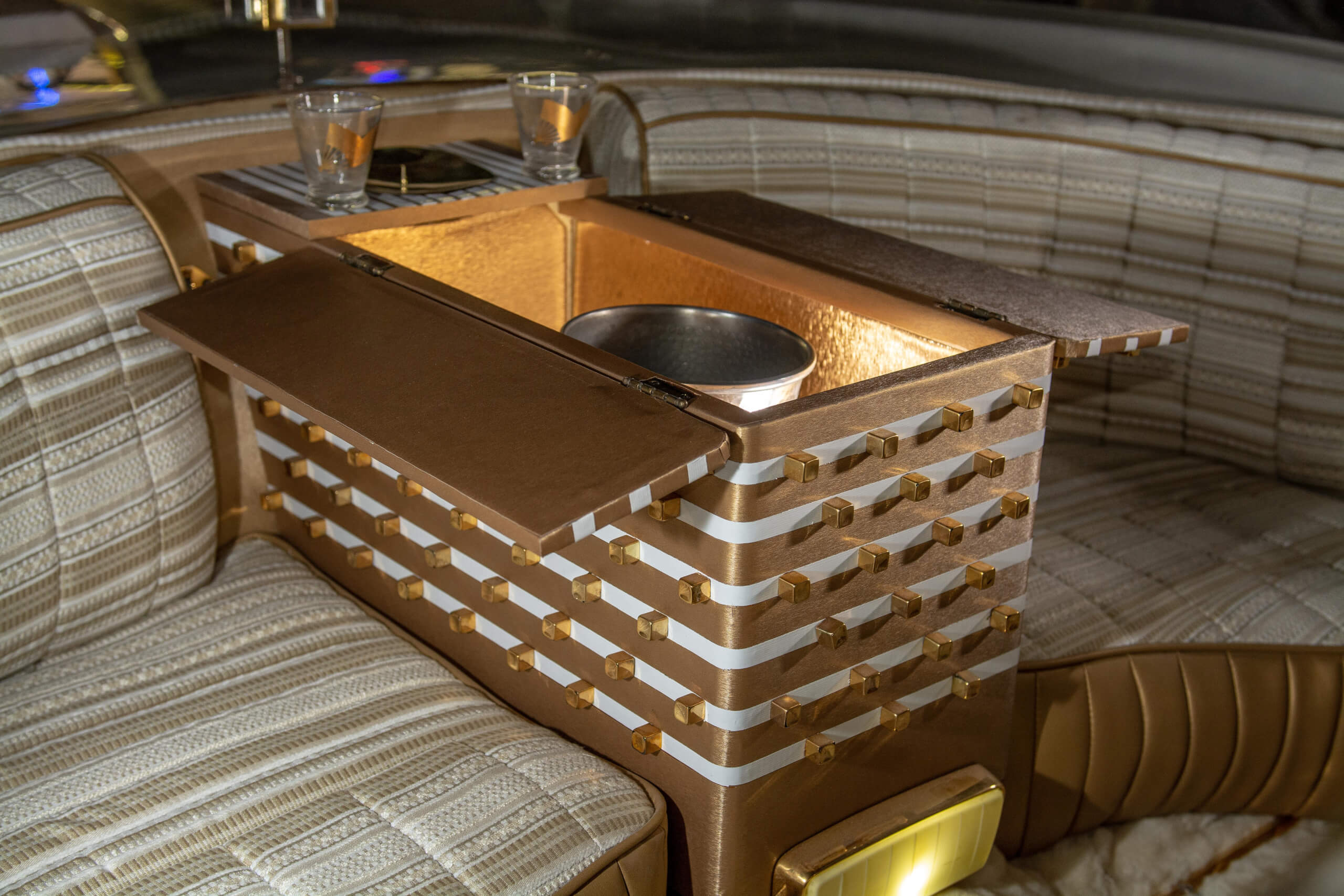 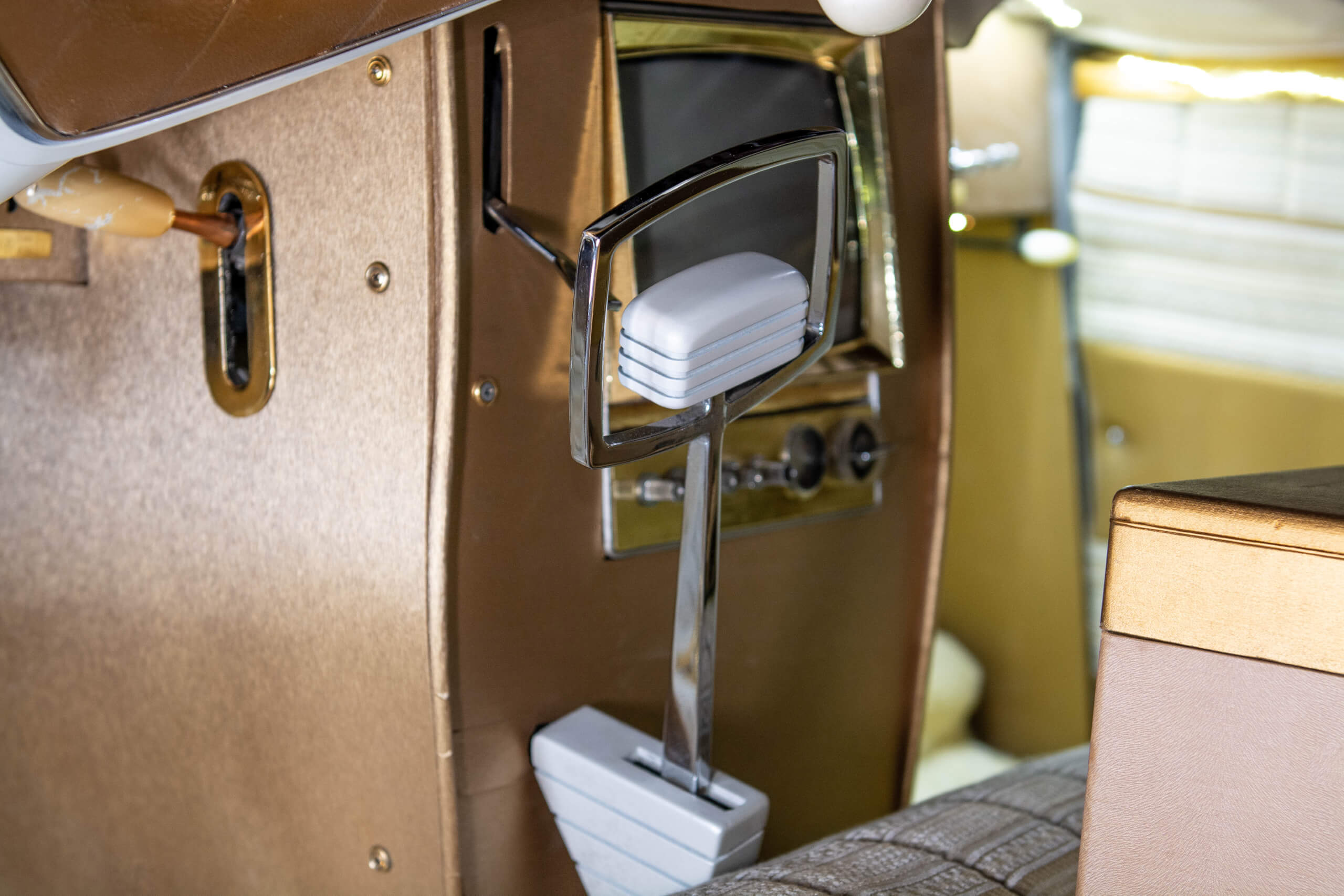 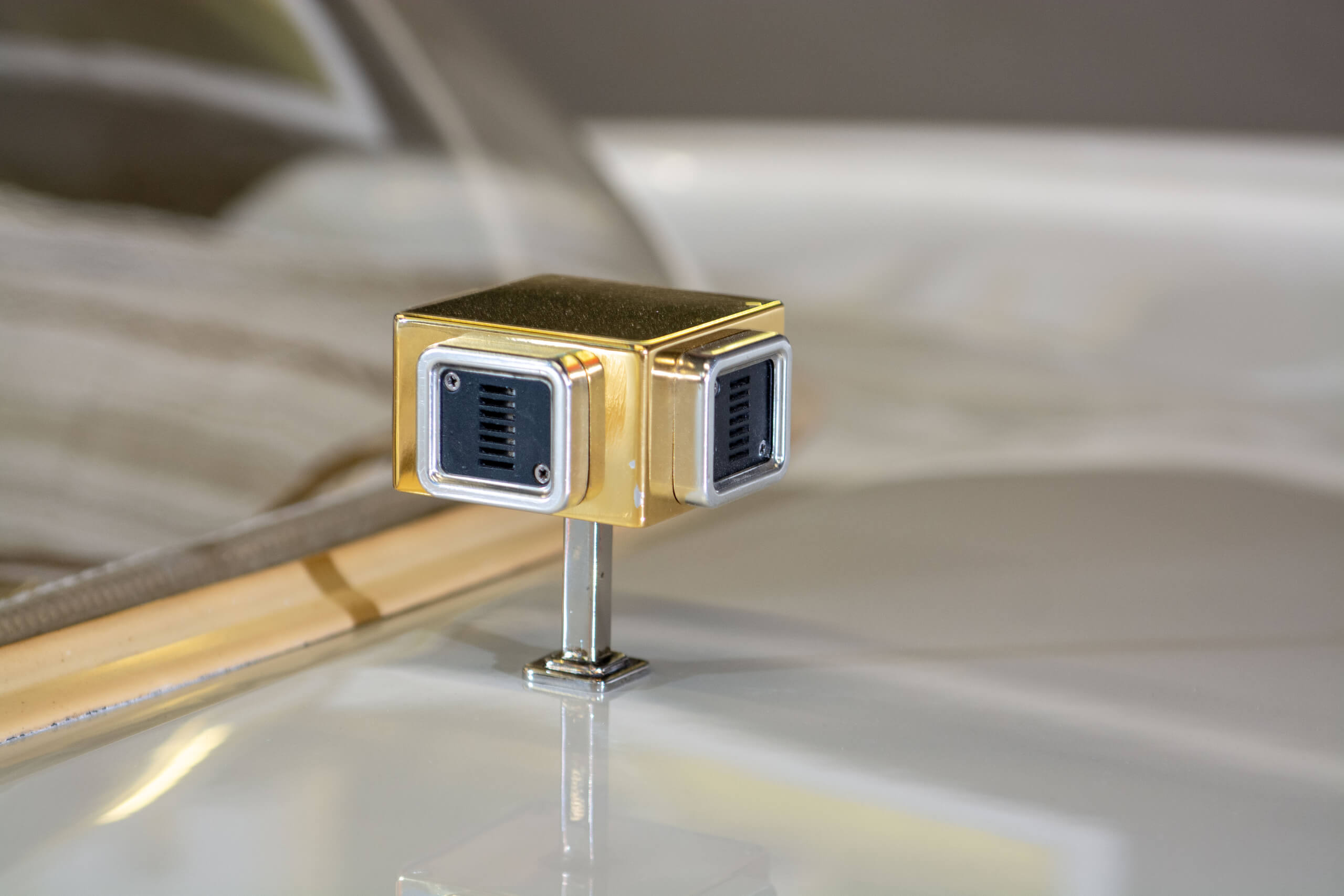 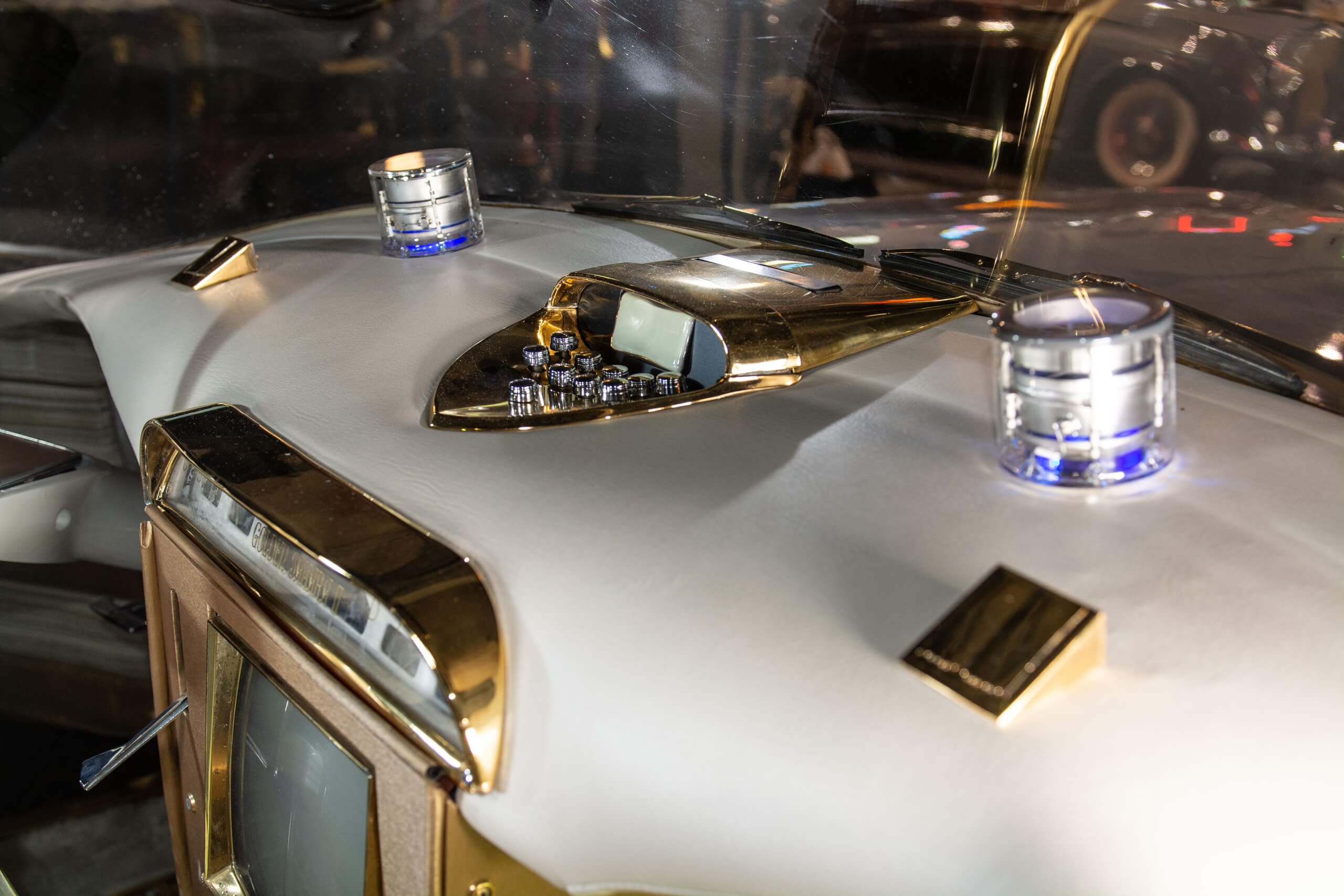 Getting the Tires to Glow

While that all may seem jaw-dropping, the Sahara II’s wildest party trick is its famed glowing tires. From 1962 through 1966, the Goodyear Tire and Rubber Company used the vehicle to promote tires made of Neothane, a translucent rubber compound. To further draw attention, twelve, 12-volt incandescent bulbs (the same impact-resistant type used in elevators and aircraft) were fitted into a metal band around each rim and could be lit up on command or blink with the turn signals.

With the original set long gone, it seemed like an impossible task to get them replicated. Greg initially reached out to 3D printing companies, before finding the perfect partner – Goodyear, themselves. Senior Engineer, Keith Buckley, lead the charge in getting a custom one-off set made at the company’s Akron, Ohio facility – the very location where the first set was created. One notable change was the inclusion of modern, more failsafe and significantly brighter, LED lights.

As the restoration project came to a close, Keith knew the perfect place to have the Sahara II showcased: the prestigious 2019 Geneva Motor Show, held annually in March. Goodyear’s booth included a look at the brand’s close involvement in the past, present and future of autonomous and robotic vehicle technology. Joining the Sahara (representing the past) would be Olli the 3D printed self-driving bus and the Goodyear Aero, a flying car concept.

It was a match made in Heaven and while all seemed to be well, disaster struck six days before the vehicle was scheduled to be flown to Europe. While in the transport truck, the Sahara suffered heavy damage to the grille and driver’s front fender and door. “We got the call about the damage on a Friday,’ recalls Bobby Olson, who manages the Klairmont vehicles. “The very last transport flight we could take to still arrive in time departed the following Thursday.”

With the clock ticking and a feverish world debut on the line, Bobby reached out to Gus K, an Automotive Collection Specialist for Mecum Auctions. Gus looped in Danrr Auto Body, located in Lake in the Hills, IL, who stepped up to not only clear their immediate schedule but work day and night to get the job done. Shop owner, Phil, his son, Nick, and the entire crew put in up to twenty hours a day, straightening the bent body panels and mending the damage. It was a breakneck pace but finally completed at 2pm on Thursday, the final travel day.

Without a second to lose, the car was crated and flown from O’Hare Airport to Frankfort, Germany. It was then trucked to Geneva, Switzerland, and loaded into the show’s convention hall and to Goodyear’s booth. “It took the European crowd by storm and was a smashing success,’ gushes Bobby. The Sahara II was displayed the entire duration of the event, which ran from March 5th through the 17th.

After returning safely stateside, the fantastical motoring machine didn’t have much a break to catch its breath. Worldwide interest in the show-stopping vehicle exploded. Despite the extreme demand, Larry is making time for Danrr Auto Body to give it a full and thorough concours restoration.

That’ll make it ready for appearances at events like this year’s 2019 Specialty Equipment Manufacturers Association show, just the spot for something as wild and well-built as the Sahara II.

Another major exhibition it’ll be seen at is the 2020 Amelia Island Concours d’Elegance. The ground-breaking wheeled wonder will not only be shown at the event, but headline a brand-new class, called ‘Customs of the ‘50s’. “The Sahara II has always had a magical feeling about it and especially for me,’ said Bill Warner, Founder and Chairman. “As a 9-year-old, I pedaled my bike three miles to the local Buick dealership in Jacksonville to see the car in person. It was truly amazing to take in.”

Many more will get that same emotional experience as the Sahara II gets out and about, continuing its globe-trotting travels. The years ahead are gearing up to be exciting and glamor-filled but being squarely in the limelight is just where the Golden Sahara II loves, and deserves, to be.